The Waldburg Prayerbook was created in 1476 for the Swabian nobleman Georg II von Waldburg (1430–82) and his wife Countess Anna von Kirchberg (ca. 1436–84). Like many other members of the House of Waldburg, Georg II was a Truchsess, a seneschal or steward ruling over Swabia during the absence of the Holy Roman Emperor. Two features of the German manuscript make it a rare treasure of illumination: first, it is one of the few ornately furnished prayer books written in the German language to survive today; second, is features an extremely comprehensive image program consisting of 46 exceptional miniatures; the Arma Christi is a consistent pictorial theme and the patron is also depicted several times in various states of dress, but always praying.

Little is known of the origins of this manuscript and its history of ownership can only be traced back to the time before the year 1800. All that is certain is the patron of the manuscript, Georg II von Waldburg (1430-82), and the year it was completed, 1476, which is dated on the first page with his coat-of-arms. The text itself does not offer much in the way of clues as to where the manuscript originated, however a hidden calendar in the manuscript and other clues do.
It is not known how the manuscript came to Stuttgart or Ludwigsburg, where Duke Karl Eugen von Württemberg founded the Ducal Library in 1765. Thus, the entire period from 1476 to the late 18th-century remains a mystery. The original binding of the manuscript was replaced sometime in the first half of the 19th century with the current binding, whose simple appearance belies the value and significance of its contents: a masterfully illuminated, uniquely designed German prayerbook from the beginning of the Northern Renaissance.

A Splendid Codex for a Noble Knight

Aside from the depictions of religious figures and symbols, the Arma Christi included, Waldburg is depicted numerous times, usually kneeling before a holy figure, but also appears once as his namesake: St. George slaying a dragon. Altogether, 46 mostly full-page miniatures, seven historiated initials, and dozens of three- and four-line initials in bright colors and gold. The scribe used a Gothic Textura script that usually appears in liturgical manuscripts. It is therefore sometimes called “missal script” because it has predominantly shaped the image of missals from this period. The rubricator and illuminator then filled in the remaining spaces with headings, decorative initials, flowering tendrils, and miniatures as far as was possible.

Unlike most prayer books, this manuscript has no calendar at the beginning of the codex, but the Litany of All Saints beginning on fol. 64r has an internal structure that is made up of chronological blocks arranged according to the church year, which is completely unique for the Litany. The compiler was not aware of the appropriate number of saints nor their proper placement in the litany but appears to have used a calendar to select the saints without any serious theological considerations. This surely could not have been the result of a monastic scriptorium, whose experience compilers would never make such mistakes. Perhaps the selection of saints was made by Waldburg himself, because this amateurishness is inconsistent the quality of both the calligraphy and the illumination. However, similar chronological lists of saints point to a tradition from the old diocese of nearby Constance.

There is further evidence of the manuscript’s geographic providence: among the no less than 178 saints listed in the manuscript, which are divided into apostles, martyrs, confessors, and women is Saint Magnus of Füssen, the so-called Apostle of the Allgäu. He was strongly venerated in the countryside around Waldsee, where Georg II resided, which thus points to the Allgäu region of Upper Swabia. This is also attested to by the fact that Magnus was patron of the nearby Premonstratensian monastery at Schussenried. Other local saints include Bishop Gebhard of Constance, Bishop Narcissus of Augsburg, St. Einsiedler Meinrad, and the rarely mentioned Ulrich von Zell. As such the work must have emerged in an area where the old dioceses of Constance and Augsburg overlap. A likely candidate would be an atelier or court artist in the town of Kempten, the oldest urban settlement in Germany, as the possible place of manufacture. 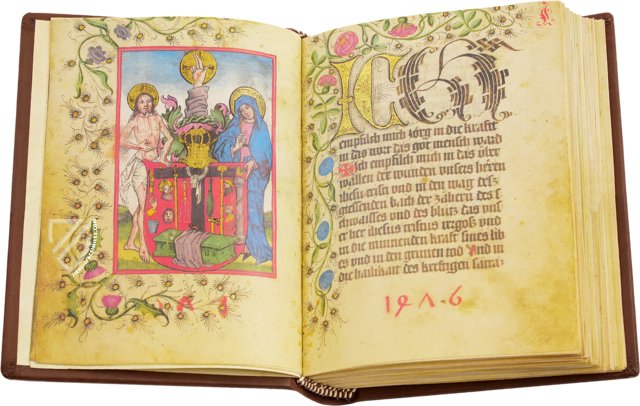 Flanked by Jesus bearing the wounds of the Crucifixion and the Virgin Mary, the crest of this shield consists of a golden helmet with the Crown of Thorns and the anointing Hand of God. It bears the Arma Christi or Instruments of the Passion, which are presented here as heraldic devices numbering nearly 20 in all: True Cross, pillar, rooster, whip, reed, Holy Lance, Holy Sponge, dice, Veil of Veronica, Peter’s sword, hammer and nails, burial shroud and tomb, vessel of myrrh, and the heads of various figures of the Passion as well as the hand of Pontius Pilate. 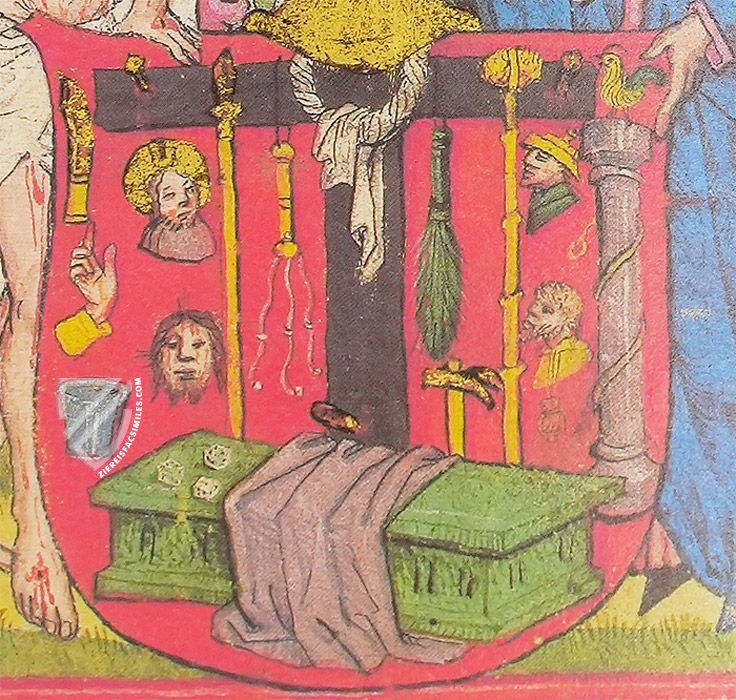 Georg II von Waldburg appears several times throughout the manuscript and can be identified by his coat of arms – three black lions on a field of gold. Almost always depicted kneeling in prayer and bareheaded with curly brown hair, he is sometimes fashionably dressed as a courtier in all black with red shoes, sometimes clad in a golden suit of armor with a red sword at his hip. This miniature stresses the role of the Virgin Mary in Catholic theology as intercessor on behalf of those who pray to her.

Although in an open field, Georg has had the foresight to bring his own kneeler with him as though he were in church praying before an altar. The Virgin Mary looks to her son, who in turn kneels on a cloud before God the Father appearing as a crowned king with a scepter and globus cruciger. A white dove representing the Holy Spirit is perched next to God’s ear as though it were giving counsel, and grisaille angels can be seen in the blue background of Heaven, which is separated from Earth by a rainbow. 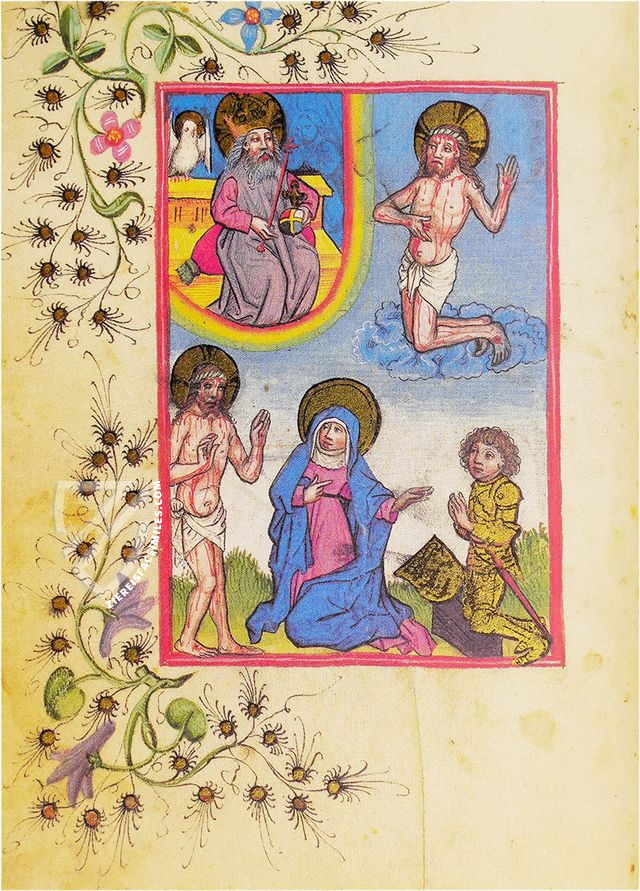 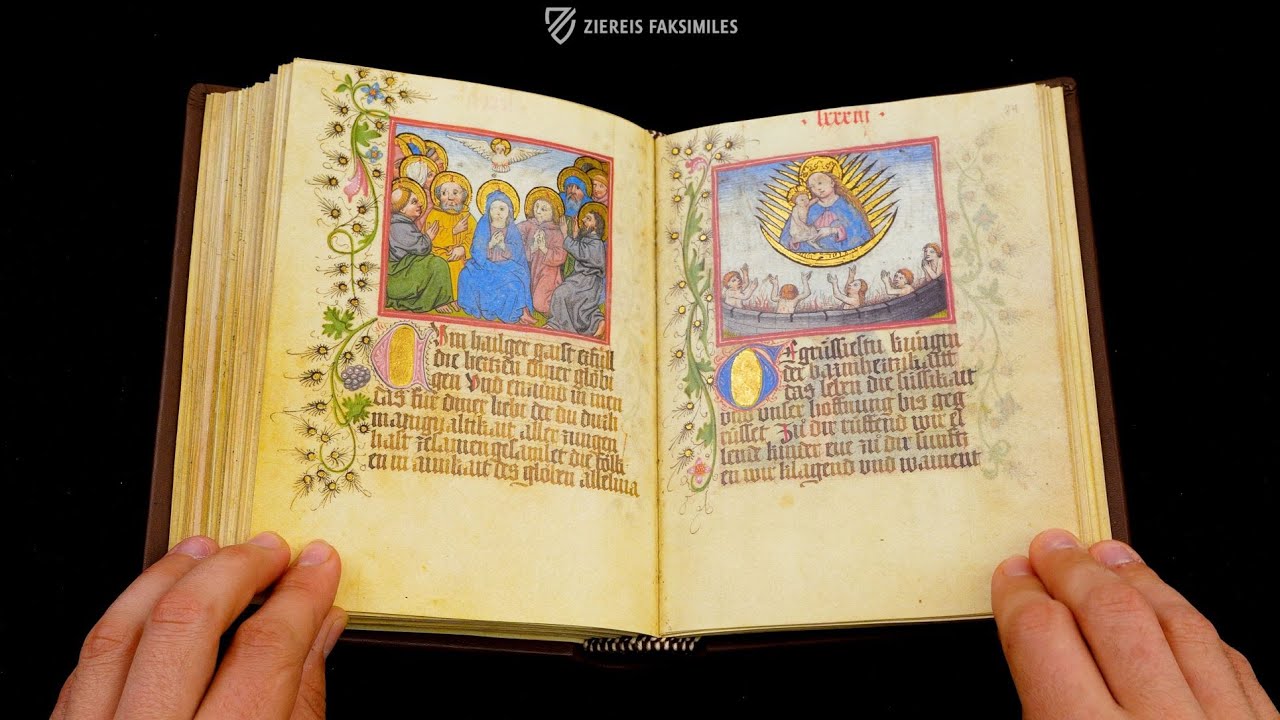 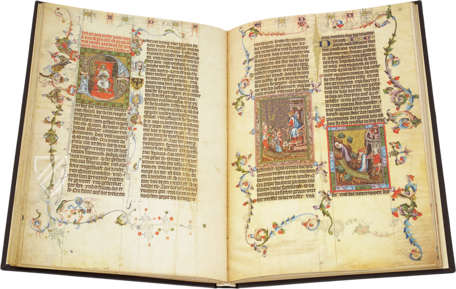 Made in the famous Wenceslas workshop in Prague: a mammoth bible in German with 646 fantastic miniatures for the German emperor

Bringing order into the chaos of the world: one of the oldest German texts as a description of the beginning of the world in verse form and as a model for subsequent medieval illuminators