This small prayer book is a jewel of early book printing in Cologne and is written in the city’s dialect, Kölsch. Consisting of 31 leaves, the codex contains a series of prayers accompanied by colored woodcuts on the opposing pages, which constitute a complete cycle of the entire Salvation History from the Fall of Man to the Last Judgment in words and pictures. The text and imagery have been carefully designed in relation to one another, enabling the reader to deeper contemplation. Despite being undated, researchers have determined with certainty that the type used can be attributed to Johann von Landen, who enrolled at the University of Cologne in 1481. In 1503, he participated in the unsuccessful protest of Cologne’s printers against the censorship of the archbishop. It is believed that he printed this prayerbook ca. 1506–07. 68 of Landen’s prints have survived to the present, mostly religious literature intended for a lay audience, but also travelogues, schoolbooks, legal texts, a book on astronomy, and an imperial decree. One third of his texts were printed in German, which was exceptional for books produced in Cologne, of which only 4% were printed in vernacular.

The so-called Cologne Prayerbook is a special treasure among the pre-Reformation German prayerbooks that have survived to the present. Measuring only 50 x 84 mm, it was obviously designed for personal use and contained 31 prayers written in Kölsch as it was spoken at the time. The codex is distinguished from earlier German prayerbooks by its picture cycle: it is designed so that each prayer text is juxtaposed by a corresponding full-page woodcut, thus making it usable for the religious edification of both the literate and illiterate. In total, there are 30 colored woodcuts from an unknown artist illustrating the simple texts. Like many incunabula, the codex has no information about when, where, and by whom it was printed. However, researchers were able to determine that the typeface used came from the printing house of Johann von Landen (1462–1522), who became a citizen of Cologne in 1497, and have determined it was printed ca. 1506–07.

A Reflection of the Zeitgeist

The Black Death not only killed millions of medieval Europeans during the mid-14th century but also shook the foundations of their beliefs. As people reexamined their souls, a new religiosity spread across Europe, which was reflected in the adoption of conservative, usually black clothing by the nobility and merchant class as though they continued to mourn the dead for generations. Pre-Reformation Germany was an extremely pious time and place marked by increased personal religious engagement by the laity. This search for faith was encouraged by contemporary authors and supported by book printers who naturally profited from the trend. As a result, there are numerous printed spiritual texts of various types that predate 1517, when Martin Luther (1483–1546) wrote his famous Ninety-Five Theses. The vast majority of these were in Latin and an astonishingly small number of private prayerbooks were printed in German, which makes this Kölsch text all the more precious.

To the modern eye, the woodcuts illustrating this codex look simplistic and naïve but they actually make use of a rich system of imagery and symbolism that would have been self-evident to a medieval audience. For example, every gesture of the figures depicted has meaning beyond the action in the scene and refer to the broader context of salvation history. Rarely have image and text been so harmoniously designed and mutually complementary to one another. Unfortunately, this visual language is no longer part of the modern person’s vocabulary save for scholars, theologians, and the particularly devout. 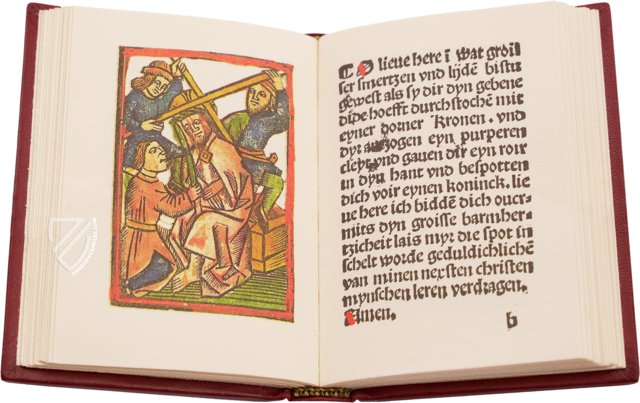 The Arrest of Jesus

After the Last Supper, Jesus brought his disciples to the Garden of Gethsemane where the betrayer Judas kissed Jesus to identify him to a group of armed men who were lying in wait to arrest him. This scene combines the Kiss of Judas with the Arrest of Jesus by depicting the scenes simultaneously: the armed men have already appeared and laid hand on Jesus while he is still embraced by Judas. Simon Peter stands to the left with his sword drawn but has not yet wounded one of the arresting party, who are armed and dressed like contemporary foot soldiers. 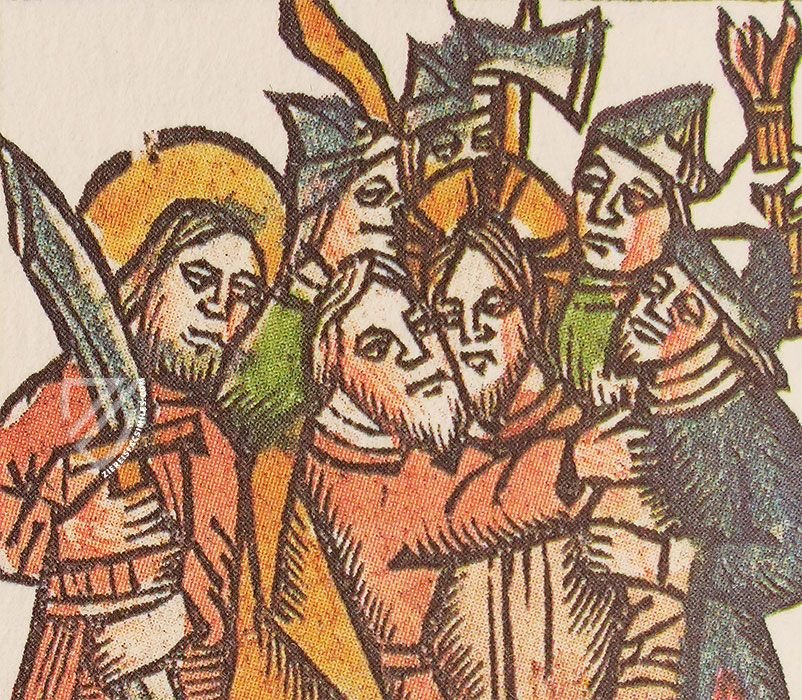 The designer of this woodcut has managed to fit all thirteen figures into this archetypal scene by stripping it down to only the most important elements: the benches, a table, and a plate with a fish – an early Christian symbol. While most medieval Western depictions show lamb, this woodcut follows the Byzantine model of having fish as the main meal, perhaps reflecting the influx of Greek scholars fleeing Constantinople at the time.

Jesus with his cross-halo is naturally seated in the middle with John the Evangelist, “the disciple whom Jesus loved” (Jn. 13:23), depicted asleep resting his head on the table or reclining against Jesus’ chest. The only other Apostle who is identifiable is Judas because he is the only figure in the woodcut who does not have a halo. This may be intended to represent that Satan has already entered in him. 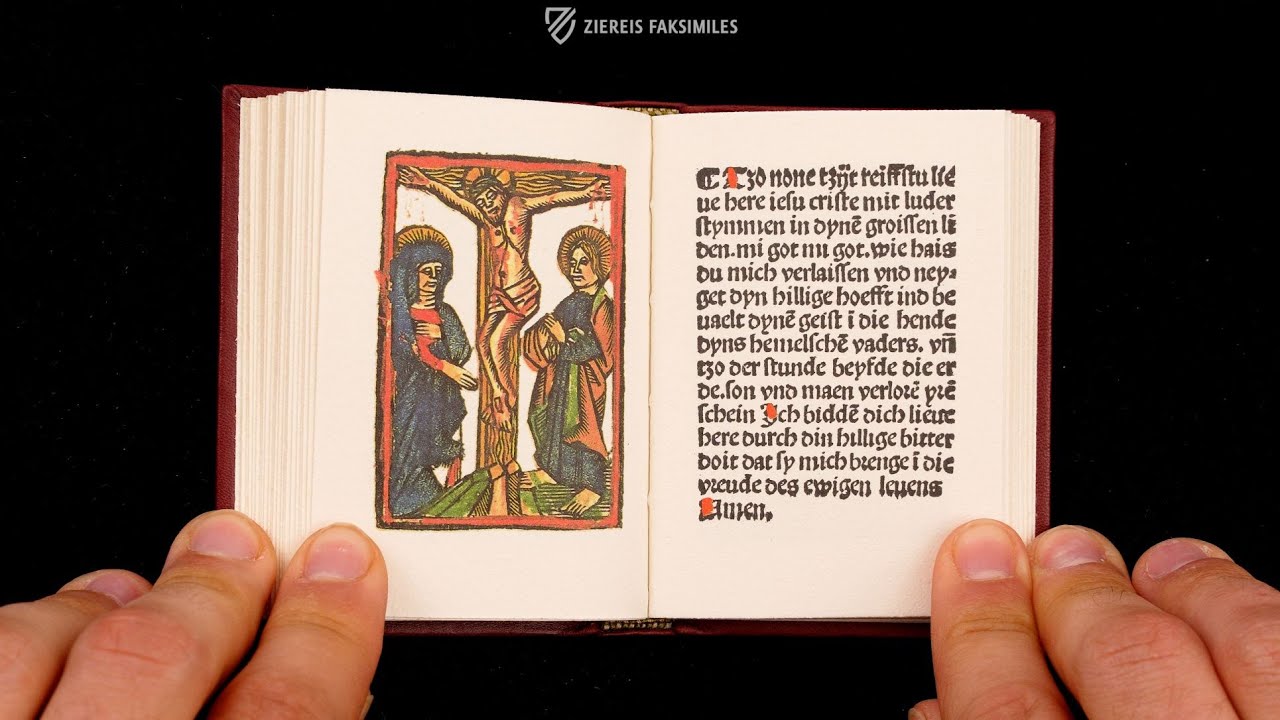