The Speculum Humanae Salvationis from Einsiedeln Abbey originates from between 1450 and 1460 in the Burgundian Netherlands. The codex produces the salvation-history connection between the events of the New and Old Testaments and is unusually richly decorated with colored illustrations and golden décor elements.

Since the Late Middle Ages, Speculae Humanae Salvationis or Mirrors of Human Salvation are a widespread form of Christian devotional books that illustrate the salvation history to the laity. Probably the most valuable medieval Speculum Humanae Salvationis originates from between 1450 and 1460, most likely in the Burgundian Netherlands. This codex is known as the Speculum Humanae Salvationis from Einsiedeln Abbey. The work contains 92 pages with 176 vividly illustrated miniatures, which depict the biblical events of the Old and New Testaments from the Fall of Man to the Day of Judgement. In word and picture, the stories intertwines the stories into a continuous, purposeful narrative.

A Master from the Highest Circles

A book illuminator whose name is no longer known was responsible for the astounding Speculum Humanae Salvationis. It is suspected that it was an artist, who was occasionally employed by the royal notary and secretary of Dreux Budé in France. Therefore, the master must have been someone who moved in the highest circles of the nobility. His style and skill show that he was acquainted with the painting of Rogier van der Weydens and was also influenced by the Books of Hours of the popular masters of Boucicaut in his own work.

The Christian Worldview of an Entire Epoch

The Speculum Humanae Salvationis would have been read by both clerics and the educated laity. Every event of the New Testament was accompanied by an event of the Old Testament that forebode it. The production of a nexus between the both Testaments was distinctive of the whole worldview of Christians in the Middle Ages. The promise, which was given to the people of Israel, was fulfilled through the salvation of mankind by Jesus Christ. This worldview was **supported by picture books oriented on salvation history.

The 176 pen and ink drawings are held in delicate pastel tones. They show not only biblical scenes but also depict everyday scenes from medieval life in great detail. The painter relocates the beholder back to medieval cities with imposing gates, knights and craftsmen who people the streets, as well as temples, wells, and forges. No limits were set on the imagination of the artist. The depictions of human figures, which are surprisingly vivid with draped garments and hatched shadows are especially well depicted. On every double-page four miniatures are to be found that are described through text passages.

The page margins of the Speculum Humanae Salvationis are decorated with an elaborate décor of thorny leaves in gold. The text is embellished with 57 three-line decorated initials on a gold background. This is extremely unusual for a Speculum Humanae Salvationis, which are normally humble and decorated less ostentatiously. The application of gold leaf makes the codex one of the most costly works of its type and gives almost unending suggestions for further illuminated manuscripts, for example, the beloved and widely circulated Books of Hours. 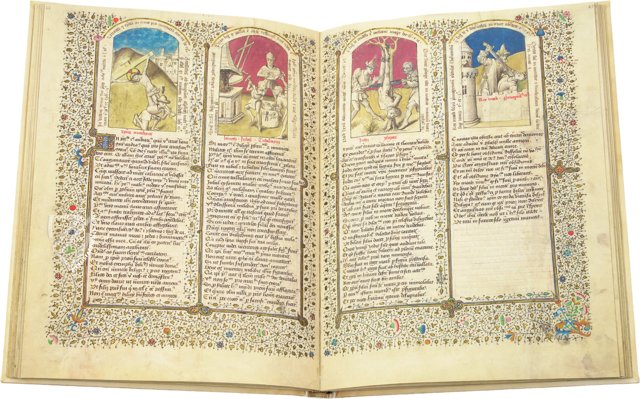 Aside from being differentiated from the other Apostles with red hair and a beard, Judas is also labelled in this miniature showing him receive the Eucharist from Jesus, who has a blue and gold cross-halo. Judas’ feet stick out from the frame, a nod to the fact that he immediately departed from the supper after receiving the piece of bread. According to the Gospel of John, Satan entered Judas the moment he ate the bread, propelling him to betray Jesus. 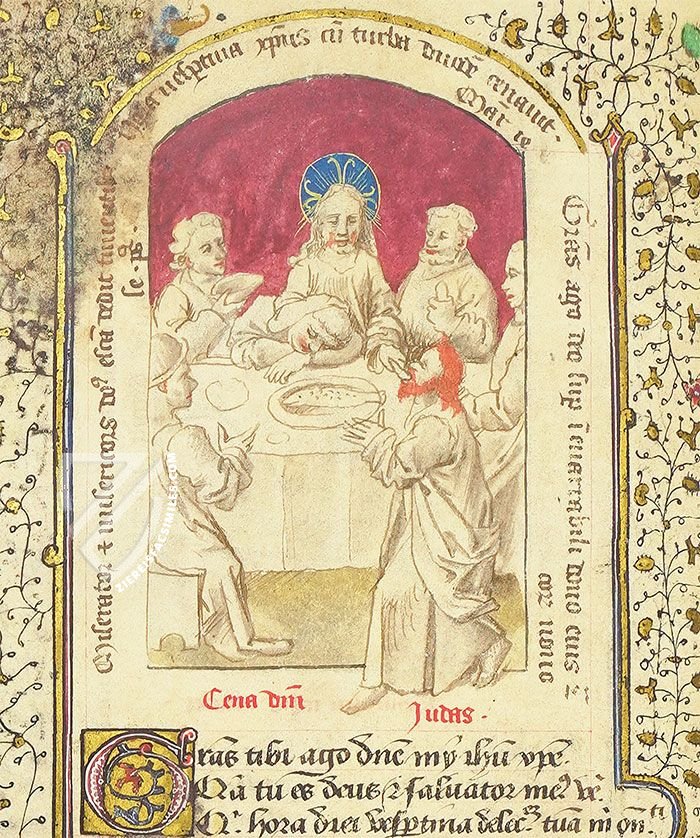 Christ’s Birth and the Cup-bearer’s Dream

This is a fine example of the illumination found in the manuscript at hand, which is filled with frames consisting of golden filigree tendrils and colorful flowers. By contrast, the color palette of the miniatures is reduced to just blue and grey tones, highlighting the artist’s skilled pen strokes. Franco-Dutch Gothic architecture in the background indicates the manuscript’s origins.

This genre presents the history of salvation in a series of juxtaposed scenes from the Old and New Testaments. In the Book of Genesis, the Pharaoh’s cup-bearer has a dream about a vine with three budding branches. Although Joseph interprets the dream as indicating that the cup-bearer will be restored to Pharaoh’s favor, it also prophesizes the Holy Trinity. 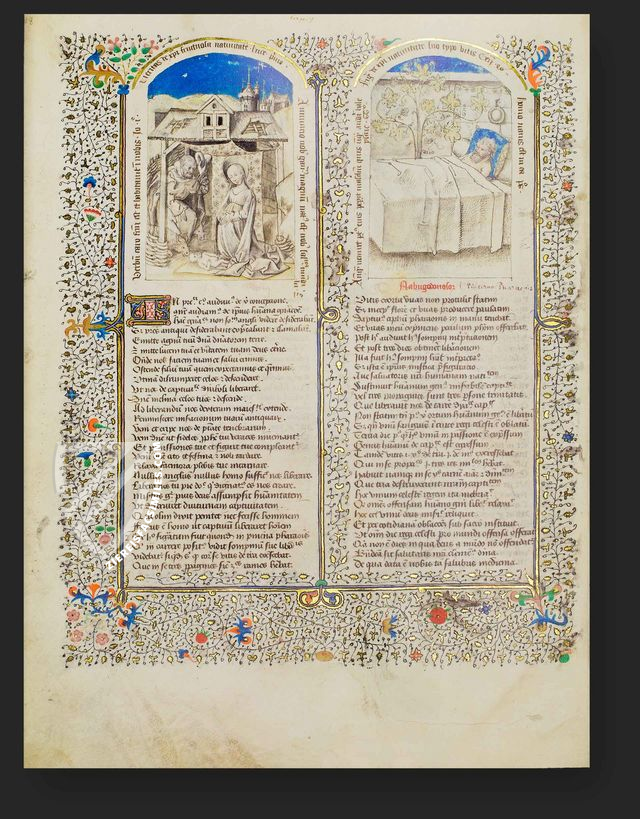 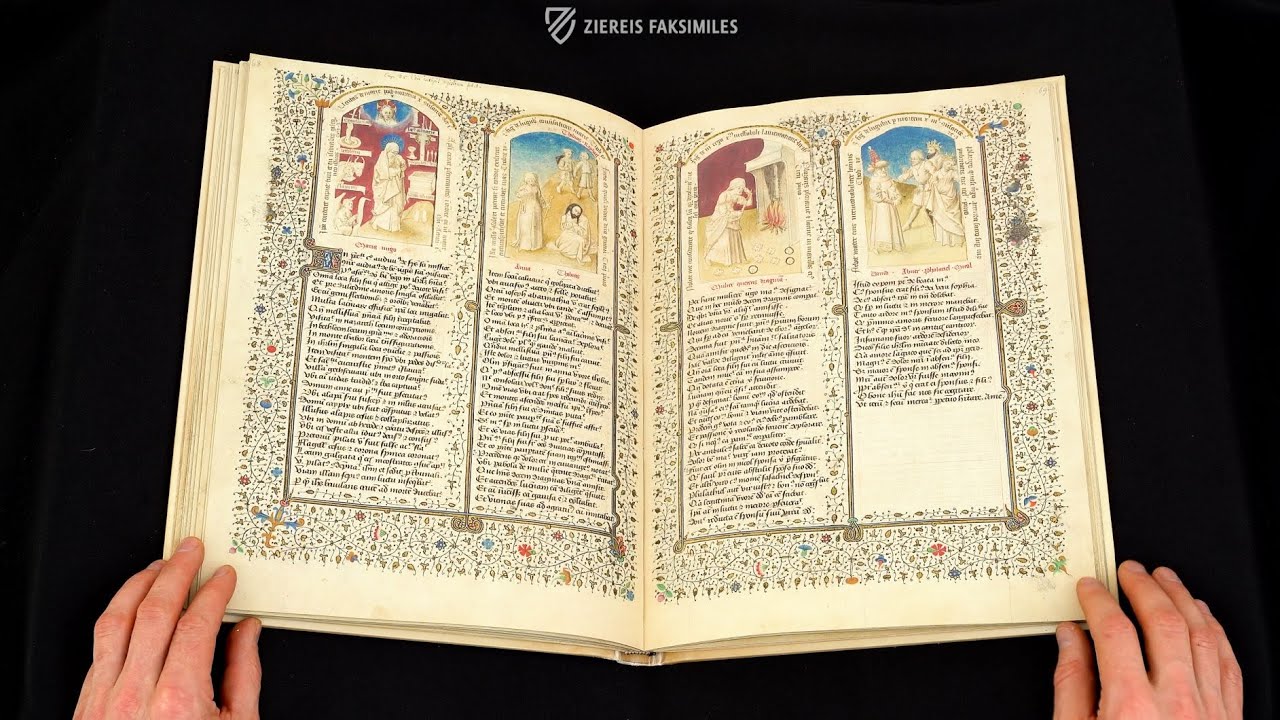 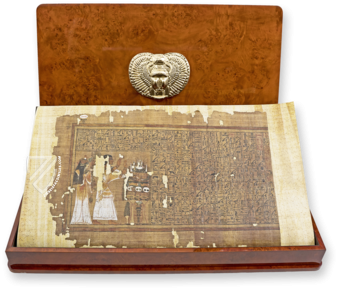