The literary genre of the bestiary is among the most beloved book genres of the medieval world. This is a particularly richly illuminated piece of animal literature, which moralistically described creatures from both the animal kingdom and the world of fantasy. These illuminated manuscripts were of especially high importance in 12th and 13th century England. The St. Petersburg Bestiary is one of the most beautiful and precious examples of these codices. It is decorated to an exceedingly rich degree with 114 colorful miniatures, most of which are set against a lofty gold leaf background, including 4 full-page miniatures. In addition to the depictions of animals, the work is furnished with an image cycle of the history of creation. Although clearly English in manufacture, little is known about the origins of the manuscript and even determining the source of its iconography is difficult. Nonetheless, it likely originated in a monastery in the northern Midlands ca. 1190.

A bestiary is a type of medieval literature that allegorically connects moralized attributes, actual or supposed, of animals and mythical creatures, with the Christian doctrine of salvation. Bestiaries are among the most beloved manuscripts of the Middle Ages and were often richly illustrated. One of the most beautiful and most precious examples of this book genre is the St. Petersburg Bestiary. The work is furnished with a total of 114 fanciful, colored miniatures. Four of them take up a whole page and were set against an opulent gold background, as is nearly every picture in the manuscript. The manuscript was composed in England during the early 12th century and represents one of the first documents written in the Gothic style of illumination.

The liturgical genre of the bestiary was of great importance in 12th and 13th century England. Inquiries into the classification of its content and style have always been fraught with difficulties. The manuscript’s sites of origin are unknown or cannot be determined for certain, the source and iconography of the work are often unclear. The St. Petersburg Bestiary probably originated ca. 1190 in an English monastery in the northern Midlands. It found itself in France in the 15th and 16th centuries, which has been confirmed through numerous notes, mostly animal names in French. A note in Latin at the end of the text indicates an owner at the beginning of the 17th century: Francis de la Morlière. In the course of the centuries, the manuscript found itself in the library of Pierre Séguir, the director of the royal chancellery under two French kings, who possessed one of the most important book collections of his time. From there the codex reached the famous Parisian Saint-Germain-des-Près Abbey by way of inheritance. The manuscript came into the hands of its first Russian owner at the end of the 18th century. This was Peter Dumbrowsky, a diplomat and bibliophile whose name is immortalized in various inscriptions. In 1805, the work was incorporated with the rest of Dumbrowky’s library into the holdings of the then Imperial Library in St. Petersburg. Today, this is the Russian National Library.

The St. Petersburg Bestiary was one of the first luxury bestiaries with miniature paintings in a precious gold leaf technique. In addition to the depictions of animals, the work is furnished with an image cycle of the history of creation. The miniatures of the bestiary were completed even before a scribe composed the text by hand. This is particularly noticeable in a few places, where it is clear that the lines of text had to avoid the pictorial scenes. The miniatures of the bestiary were created by at least two different illuminators. One of the artists concentrated on the design of the depictions of animals, while the other took care of the illustration of the creation cycle. A few special features can be recognized in the style of the illumination that make it possible to date the year to ca. 1190. The vivid alignment and the noble, harmonious coloration of the pictures attest to a painting style that recurred often in the English literature of this time. Particularly worthy of note is the design of the figures, above all the lines of the faces and the folds of the garments of those persons depicted. Instead of a flat painting style, the masters responsible for the bestiary were able to make their figures appear vivid and dynamic.

As the ‘king of the beasts’, the lion is the first animal featured in this splendid late-12th century English bestiary. The artist’s lack of familiarity with lions is evident from the fact that both parents are depicted with thick manes and he was likely working from a model, which was typical. Nonetheless, they are depicted with loving faces as they lick their cubs. The affectionate scene is presented in a simple green frame and presented in front of a burnished gold background. 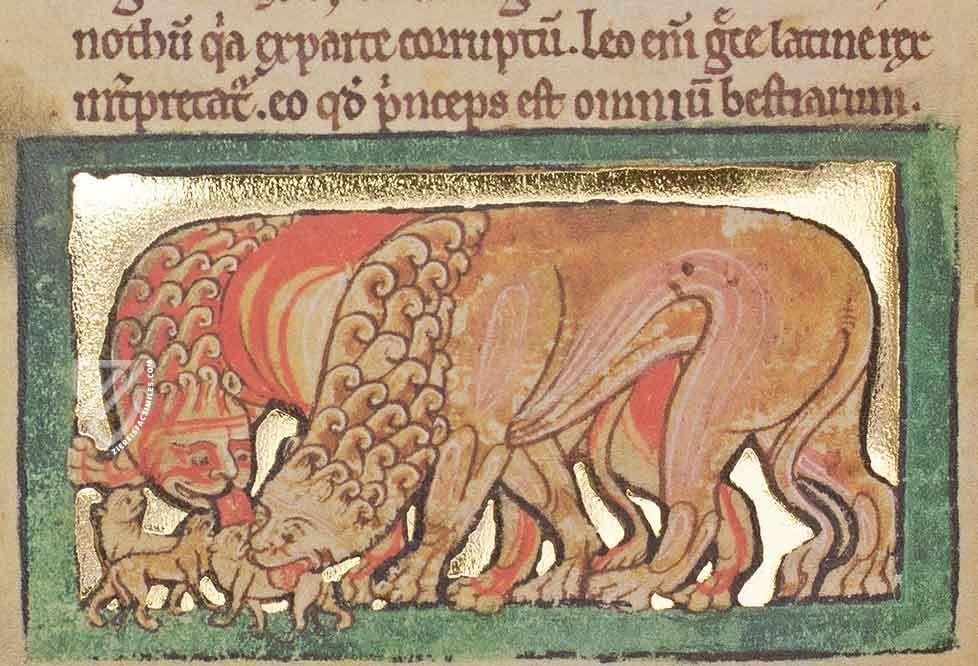 Medieval bestiaries are beloved by bibliophiles for the often humorous depiction of creatures both real and imaginary. Few mythical beasts are as hilarious as the bonnacon, which was first described by Pliny the Elder, and protects itself from potential pursuers by using an unusual weapon – flaming flatulence.

The extremely high quality of this miniature – finely colored and contoured figures with a burnished gold leaf background – contrasts with its crude subject matter. Depicted in green, the bonnacon looks back at its pursuers and resembles a bull with inward-curving horns and a mane. We see the leading man protecting the rest of the group from the bonnacon’s “weapon” with a large blue kite shield as a man in the rear raises an axe. 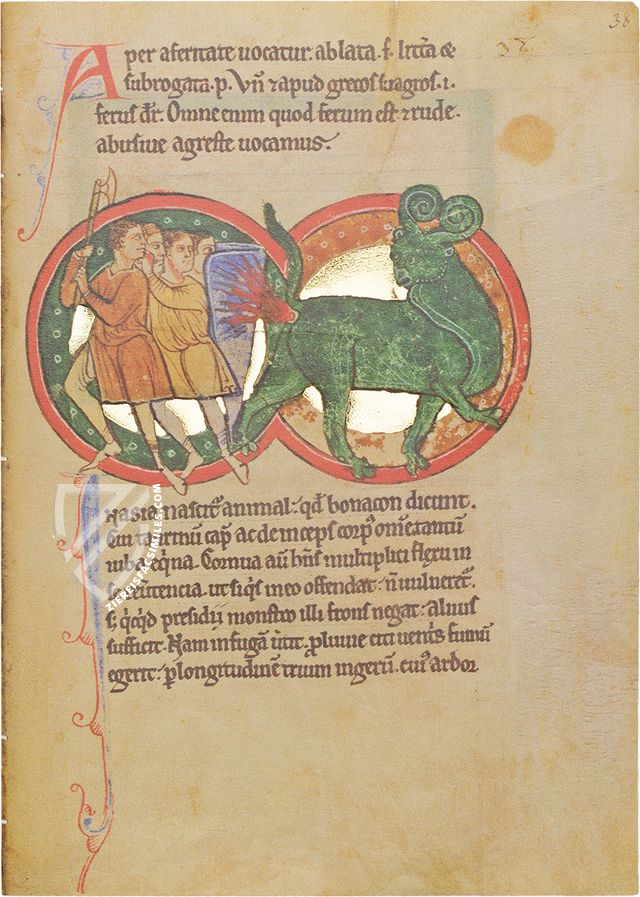 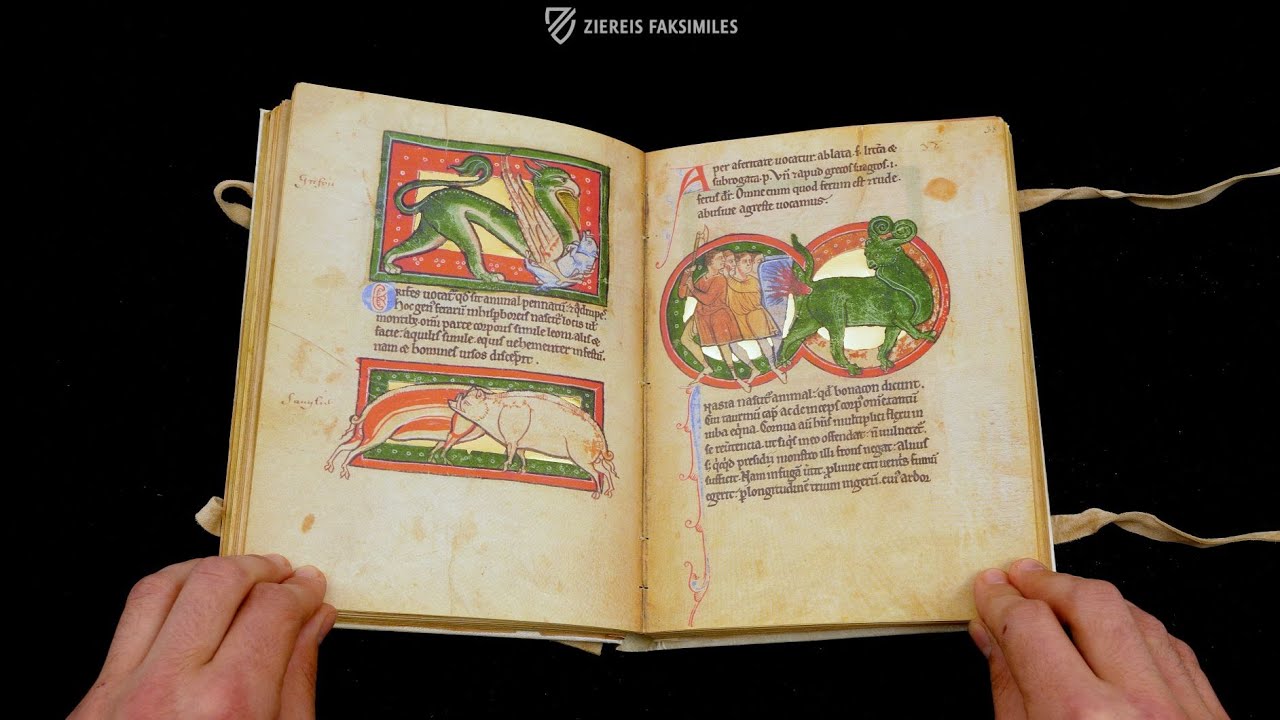 Publisher: AyN Ediciones – Madrid, 2002
Limited Edition: 995 copies
Binding: Parchment binding with four elegant bands
Commentary: 1 volume by O. N. Bleskina, Javier Docampo, and Gregorio Solera
Language: Spanish
1 volume: Exact reproduction of the original document (extent, color and size) Reproduction of the entire original document as detailed as possible (scope, format, colors). The binding may not correspond to the original or current document binding.
Regular price without login (like new)1,890 €
Log in for a Better Price!
Order / Ask a Question
You might also be interested in: 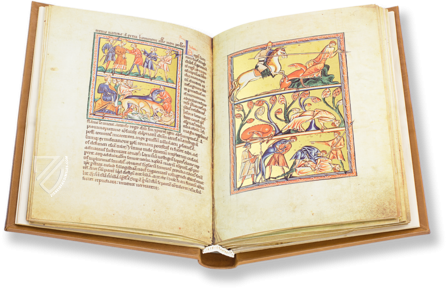 A moral-religious perspective on nature and one of the most beautiful representatives of this genre: the famous Oxford Bestiary with its more than 130 golden pictures of wild animals and fantastic mythical creatures 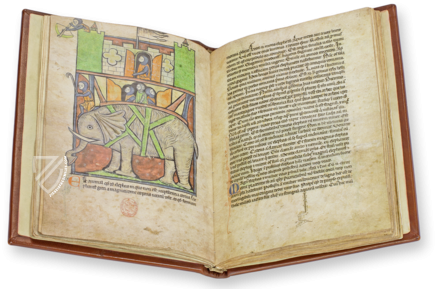 Decorated with 164 miniatures of native and exotic animals as well as mythical creatures: one of the most beautifully preserved bestiaries of the Middle Ages 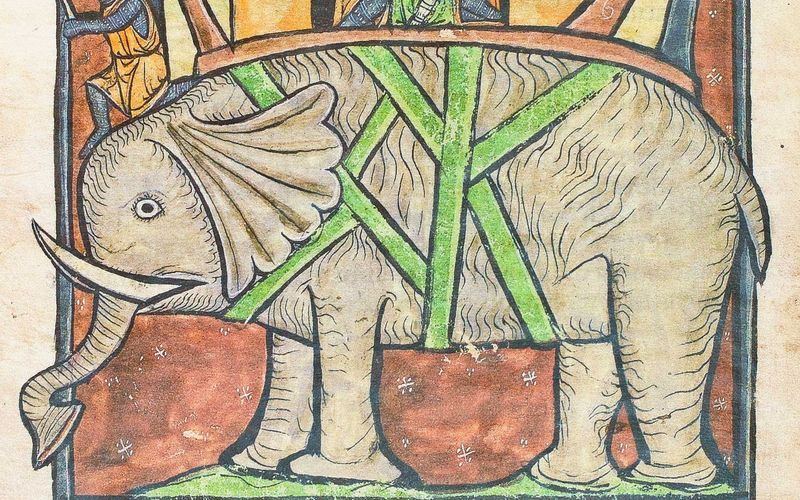