The purpose of the Passover Seder is to relate and pass down the story of Exodus, the liberation from Egyptian bondage and deliverance into the Promised Land, to the next generation. Biblical verses, Psalms, hymns, and traditions thereof are contained in and read from a Haggadah. This late-Gothic specimen from Germany was created ca. 1502 and virtually every page is adorned with miniatures illustrating the text as well as depicting daily life for German Jews during the period. The Floersheim Haggadah presents the celebratory meal in wonderful miniatures featuring contemporary clothing and Gothic architecture.

The Passover Seder is a ritual feast, the most widely celebrated by Jews around the world, requiring the use of a Haggadah – a Jewish text that guides participants through the meal and from which they read out loud. This is one of the finest Haggadot to survive from the Middle Ages due to its rich illumination. The margins of virtually every page of text are filled with late-Gothic miniatures that both illustrate the text concerning the celebratory Passover feast of Seder and show scenes from everyday life including farming and construction. As such, it is a wonderful inside view of the lives of German Jews ca. 1502 when the manuscript was completed.

Passover commemorates the liberation of the people of Israel from servitude in Egypt and the Exodus to the Promised Land, the main intention being to pass on this message of liberation from one generation to the next, as "every person in whatever period they live has the obligation to consider themselves as being part of the great exodus from Egypt". The prospect of final deliverance is drawn from a messianic perspective. Passover begins on the 14th day of the month of Nisan, i.e. on the first full moon in spring, and lasts for eight days. At night, every family has their Passover lamb and unleavened bread (matzah), bitter herbs, and wine. Over the years, a fixed order (Seder) was established for this religious meal, according to which the liturgy was held. The basic form of this order is about a thousand years old. It comprises biblical verses, hymns and Psalms, and records of religious customs and is read by the head of the family on the first and second evenings of Passover.

Lichtdruck – Zurich, 1985
Publisher: Lichtdruck – Zurich, 1985
Limited Edition: 936 copies
Commentary: 1 volume by Iris Fishof, Meir Hovav, and Lenn J. Schramm (translation)
Languages: English, Hebrew
1 volume: This facsimile is not complete. Partial reproduction of the original document as detailed as possible (scope, format, colors). The pages are represented on a larger white background. The binding may not correspond to the original or current document binding.
Price Category: € (under 1,000€)
Edition available
Price: Login here!
Order / Ask a Question
You might also be interested in: 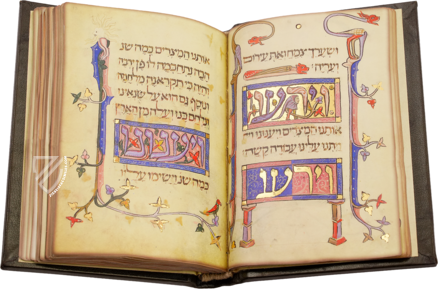 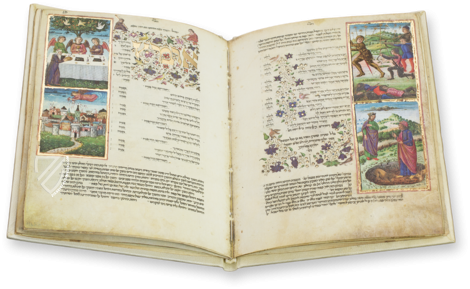