The Great Passion of Albrecht Dürer is a collection of woodcuts that were made by the famous artist in the time period from 1496 to 1511. The work contains some of the most outstanding depictions that were made by a German Renaissance artist. Today the manuscript of the famous master is found in the Spanish National Library.

Albrecht Dürer was probably the most shimmering example of the Renaissance in Germany. The universally gifted and world-renowned artist significantly influenced various scholarly subjects such as mathematics or art theory. Dürer typically depicted Christian motifs in his paintings, drawings, copperplate engravings, and woodcuts. The Great Passion is an impressive series of twelve woodcuts that show representations from the life of the Savior Jesus Christ. The breathtaking scenes are among the highest quality artworks that Dürer ever made.

The “Passion” is typically understood to be the physical and spiritual sufferings that Christ went through in the last days of his earthly life. This theme was especially popular in Germany in 15th and 16th centuries. The church used pictures to tell of the last days in the life of Christ because the majority of the population could neither read nor write. Already in the Middle Ages, a specific iconography of the tale of woe was already elaborated, which was easily recognizable. Albrecht Dürer, as he dedicated himself to the Passion theme, appended his personal and unmistakable additions to the traditional representational motifs.

The Great Passion cycle is executed in a woodcut and consists of eleven graphics and a title page. Dürer created his work in two phases. The majority of the woodcuts arose between 1496 and 1500. In the years 1496 to 1498, Dürer created the following dramatic compositions of the Passion: Christ on the Mount of Olives, Flagellation of Christ, Ecce homo, Bearing of the Cross, Christ on the Cross, and The Entombment of Christ*. These graphics were exactly dated by their gifted master. After one of many journeys to Italy (1505–1507), the artist completed the work on his Passion in Nuremberg in 1511, and gave them Latin text on the back sides of the pictures. One recognizes the artistic worth of this fantastic picture cycle among others by the duration that its design required.

The large-format, monumentally effective work about the life and death of Jesus Christ demonstrates the full talent of Albrecht Dürer. The twelve black-and-white woodcuts present perfect contrasts of brightness and darkness, of light and shade. The spatially correct depictions attest to the unbelievable imaginative power of the master. Dürer shows us an idealized Christ in his anatomy. The incomparable masterpiece is found today in the Spanish National Library in Madrid. 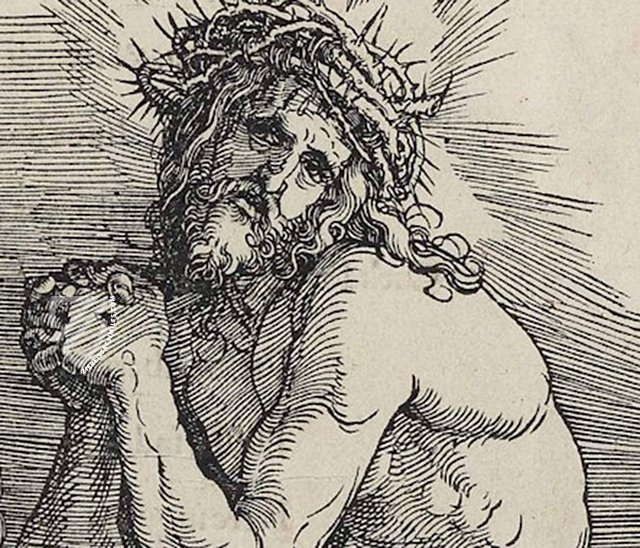 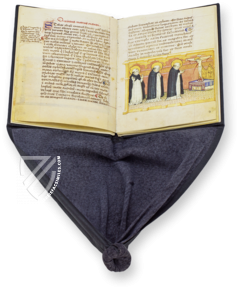 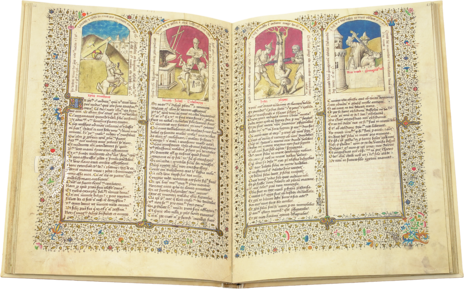 The famous Mirror of Human Salvation as a manuscript from the Netherlands: 176 pen drawings of biblical history and medieval life