The finest silver and medieval book illumination – this combination was extremely attractive even in medieval and Renaissance times. In the 15th century, none other than Lorenzo de' Medici, known as "the Magnificent", had an impressive codex made for himself that combined the filigree art of book illumination with knowledge of arithmetic and trade. The possession and trade of silver has always been considered a sign of special prosperity and was highly valued not only by the Medici. Even today, the precious metal silver occupies a special position and is coveted in a similar manner as the illumination of the Middle Ages.

The Treatise on Arithmetic of Lorenzo I de Medici, named the Magnificent, probably served as an instructional book for his son Giovanni, the later Pope Leo X. The Medici were hegemonic in their banking prowess, and so it is fitting that their banking and arithmetic should be handed down. The magnificently decorated manuscript contains a treatise on arithmetic and geometry by Filippo Calandri, which prepend several panels with singular paintings of one or more numbers. This mathematical work is, like its countless miniatures in the text, overflowing with ornaments, figurative depictions, and, above all, the Medici Coat of Arms. Everything shines with precious gold. Thus, this edition, which was printed in Florence in 1491, represents a singular luxury object that subordinates its didactic utility to the artistic phenomenon.
A selection of ten miniature pages mounted on black passe-partouts from this splendid manuscript are presented here in a set with a 999.9 fine silver coin weighing five ounces, which is protected by a wooden box. One side of the coin depicts a map of the sixteen states of the Federal Republic of Germany while the other has an eagle with the words BUNDESREPUBLIK DEUTSCHLAND appearing above with the opening words of the German anthem below: EINGIKEIT UND RECHT UND FREIHEIT.

The famous patron of the manuscript, Lorenzo I. de Medici (1449–1492), the famous member of the influential Medici dynasty in Florence, was also a patron of art. Banking is unquestionably connected to the Medici. They founded a modern system of banking, which was ruled by them, and were even the bankers of the Popes. Lorenzo’s son Giovanni, the later Pope Leo X, would have been made familiar with banking and arithmetic lessons through this manuscript, as well as gaining a humanistic education.

Golden Images for a Mathematical Education

Throughout the 100 pages of the manuscript, measuring 17 x 12 cm, the 230 wonderful miniatures altogether. Next to the artful initials with exquisite leaflet work and in bright colors, the whole-page tables for calculations are sure to impress. The columns of figures are noted in bright red, blue, or green, and in golden writing. However, these are almost lost in the pageantry of the pages. Built like an altar with a predella with figurative depictions, e.g. musical cherubs, the arithmetic tables are decorated all over with ornamentation. Floral tendrils on the edges surround small cherubs, and the luminous Medici Coat of Arms is visible everywhere.
A few special text pages are designed in this fantastic manner, with borders of manifold ornamentation, classical forms, and mythological figures. Next to these whole page depictions, the text contains countless figurative illustrations, which are often scenes of everyday life, laborers at work, but also historical events. The various figures bustle about in partially perspective spaces. The marginal illustrations present with didactic intention the handling of money and goods as well as the problems with the activity of a merchant, which are mentioned in the text.

A Luxurious Object of the Late 15th Century

The manuscript is allegedly from Florence at the end of 15th century. In the year 1491, the Treatise on Arithmetic and Geometry was printed by Filippo Calandri, with a dedication to Giuliano de Medici, a later son of Lorenzo the Magnificent. With its extensive pictorial decorations, the superb manuscript-edition of this arithmetic treatise appears to have been more of a luxury object than a practical textbook. Written in Italian with Arabic numerals, this manuscript was on the cutting edge of its time.
As for the artist of the miniatures, the Italian miniaturist Giovanni Boccardo, also known as Boccardino il Vecchio, was responsible. He would later also work for Pope Leo X. In recent research, it is speculated, that two different artists contributed to the book project, perhaps in the style of Francesco di Antonio del Chierico – which is similar to the Book of Hours of Lorenzo the Magnificent – the other in the style of Gherardo di Giovannis and Pedro Berrunguetes. 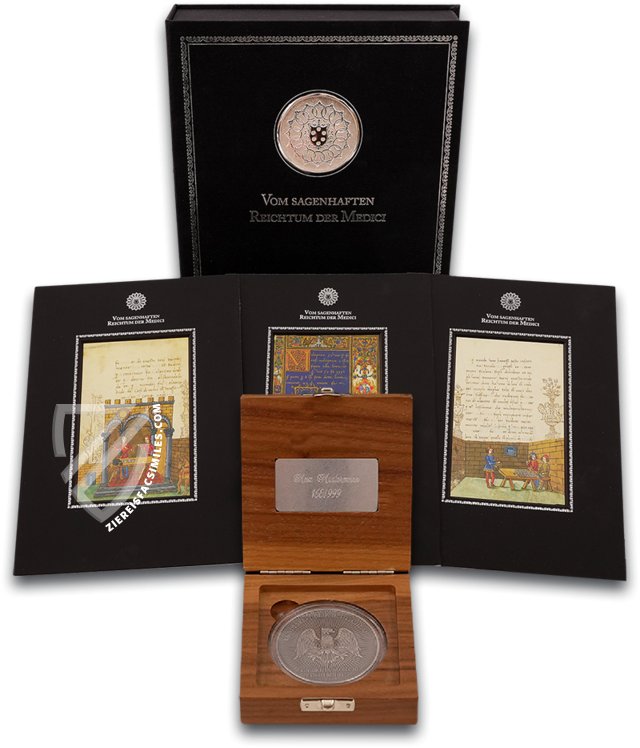 Although famous above all for its early banking industry, Florence's wealth was actually based primarily on its textile industry. Florentine fabrics were highly sought after and were among the finest produced in late medieval Europe. The raw material, wool, came from the green pastures of the British Isles to the weavers of Florence via Dutch trading centers. In the bas-de-page miniature, the two merchants advertise their high-quality products: soft wool and the finest cloth.

Gaining Wealth through Games of Chance

Here we see two young noblemen dressed in expensive, red-dyed clothes playing dice in a loggia bearing the coat of arms of the Dell'Antella family in one of the pendentives. It has wonderfully vaulted ceilings and columns, to which one of them has tied up their horse who waits patiently outside. In this game, one player rolls the dice while the other guesses the outcome.

Archaeologists have found dice that predate recorded history, and the Roman legionaries were infamously fond of the game even though it was illegal. In the Late Middle Ages, gambling was a beloved pastime of the upper classes that, like astrology, was officially banned by the Catholic Church. Then, just as today, great sums could be won – and lost – by playing games of chance. 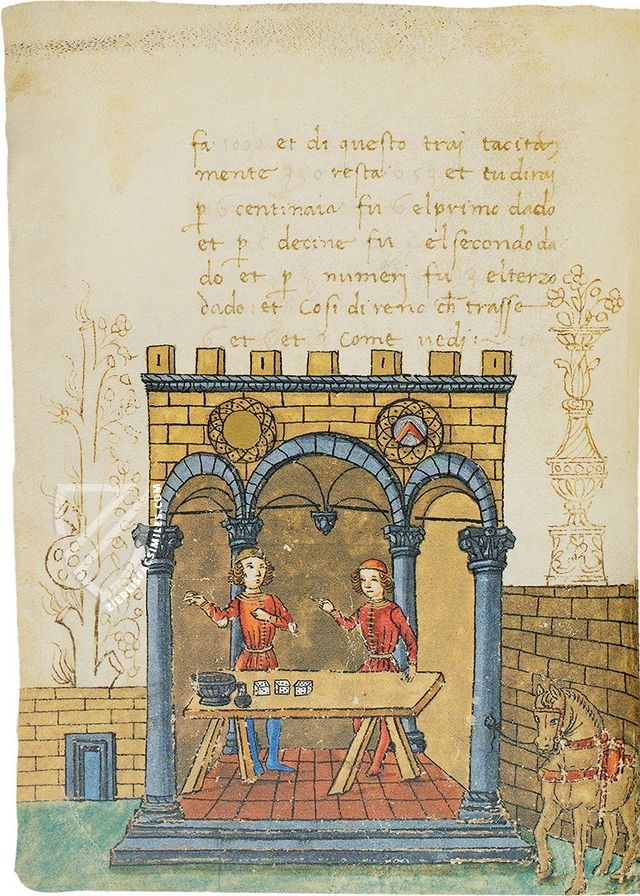