The Très Riches Heures is the book of hours of the famous bibliophile Duke Jean de Berry, which was made by some of the most talented book artists of the Middle Ages between 1411 and 1485. Begun by the Limburg Brothers, it was later finished by Barthélemy d'Eyck and Jean Colombe at the behest of Duke Charles I of Savoy. The manuscript is the most popular and beautiful manuscript of the 15th century. Its stunningly beautiful miniatures, richly adorned with gold and silver, are small masterpieces that remain unforgettable for every beholder. They depict scenes from life at court as well as the everyday lives of farmers. Among the manuscript’s 130 full-page miniatures, the most famous are the twelve labors of the months, which are unrivalled to this day in their quality. Finally, the meticulously written script of this masterpiece of Flemish art is adorned by more than 3,000 gilded initials.

The Très Riches Heures of Duke Jean de Berry, an unrivalled highpoint of Flemish book art, represents the most famous handwritten and illuminated book of all time. The work was designed collectively by four of the most gifted and popular illuminators of the 15th century. The precious manuscript is adorned with 130 full-page miniatures, which are ennobled with sparkling and shimmering gold leaf and silver elements. More than 3,000 gilded initials decorate the meticulous script of the work. The book treasure is famous in particular for its 12 calendar pages, which are unrivalled to this day in their quality.

A Jewel of the Lord’s Library

Très Riches Heures is the title of the most famous book of hours of all time, which was produced in the name of the Duke of Berry. Jean de Berry is considered to be one of the greatest art patrons in history. He was an exceedingly educated man and a great friend of illuminated manuscripts. Numerous handwritten works originated from his commission, although the Très Riches Heures represents the absolute highpoint of his unfathomably valuable collection. Today the magnificent original of the manuscript is housed in the Château de Chantilly Library.

The Masters of Book Art

The Limburg Brothers, Hermann, Paul, and Jehanequin to be more precise, are responsible for the majority of the design of the splendid work. Their illustrations made the manuscript the unrivalled highpoint of the European art of illumination between the end of the Gothic period and the beginning of the Renaissance. The three brothers worked from 1411 to 1416 on the furnishing of the codex and then died under mysterious circumstances, probably a plague. Their commissioner also died during this time. An outstanding illuminator by the name of Jean Colombe finally completed work in 1485 at the behest of Charles I, Duke of Savoy.

The Magical Art of Illumination

In the miniatures, the Limburg brothers convey a medieval world that appears to be magical and leaves every beholder in astonishment. Their masterful skills, their knowledge of coloration and composition, as well as their exact powers of observation could be exceeded by no other illuminators in the world. The images thematize scenes from life at the court of the Prince of Berry, as well as everyday scenes from the life of the rural population. The exertions of field work, the enchanting beauty of the countryside, the monumentality of castles and walled cities, the magnificent garments of French high society, and the simple clothes of the peasantry are depicted. The manuscript reproduces the whole breadth of life in medieval France in a breathtaking manner. 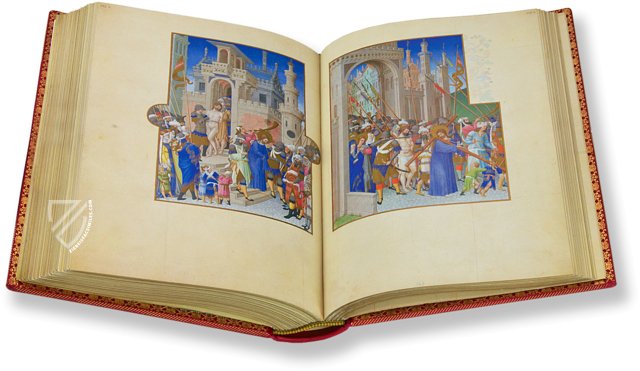 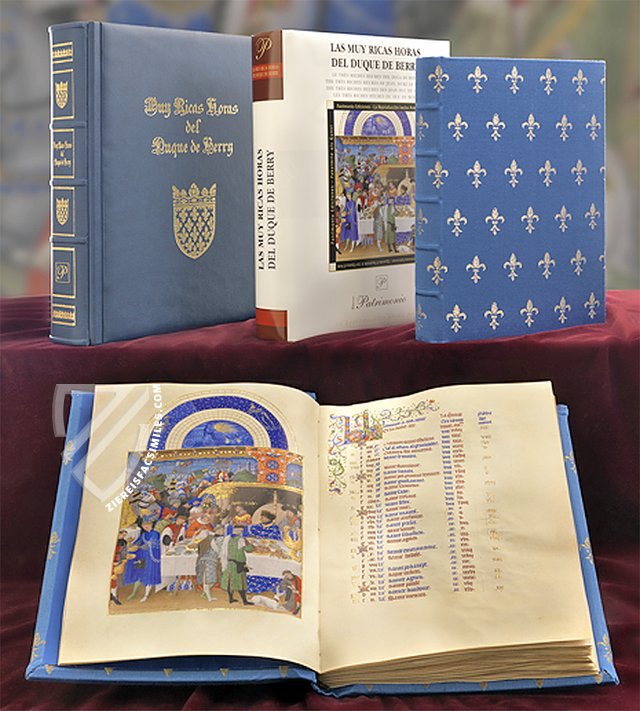 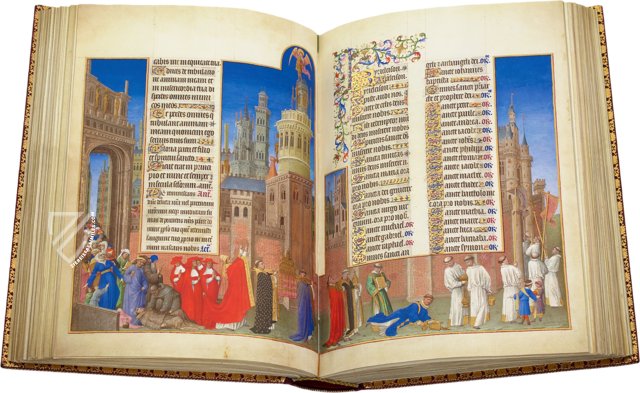 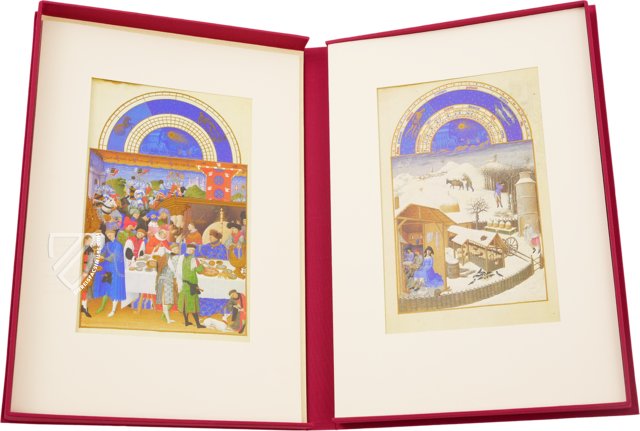 Set within an arcade-like architectural frame, this bas-de-page miniature is divided between two scenes. On the right we can see a funeral procession making its way through a city with monks holding torches flanking a coffin draped in a black cloth with a white cross. Perhaps the deceased was a member of a monastic military order such as the Hospitallers. A gravedigger can be seen on the left – or is he a grave robber? The skulls next to the open grave suggest the latter.

Although the manuscript is famous for being arguably the greatest work of medieval illumination, its calendar pages are regarded as the crown jewels and far exceed the typical labors of the month or zodiac signs found in a typical calendar section. The September miniature is the most famous and accomplished of them all.

This miniature was composed in two phases by two masters. The upper section depicting the sky and Château de Saumur likely originated from Paul de Limbourg and the foreground with the grape harvest was completed by Jean Colombe. The fairytale appearance of the castle belies its purpose as a fortification, and contrasts with the pastoral image of the peasants, one of one of whom is pregnant while another samples the harvest. 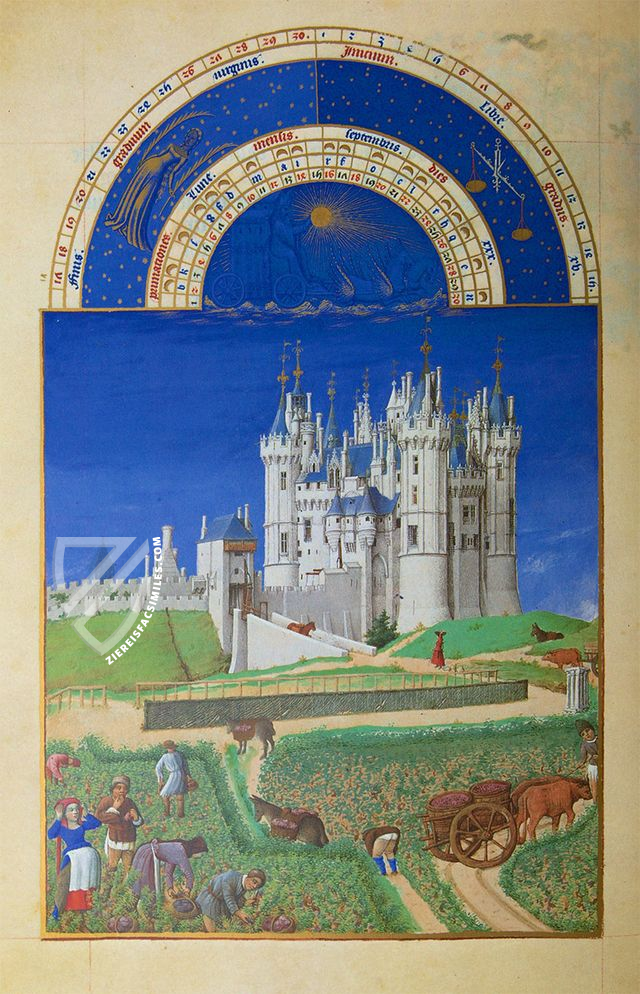 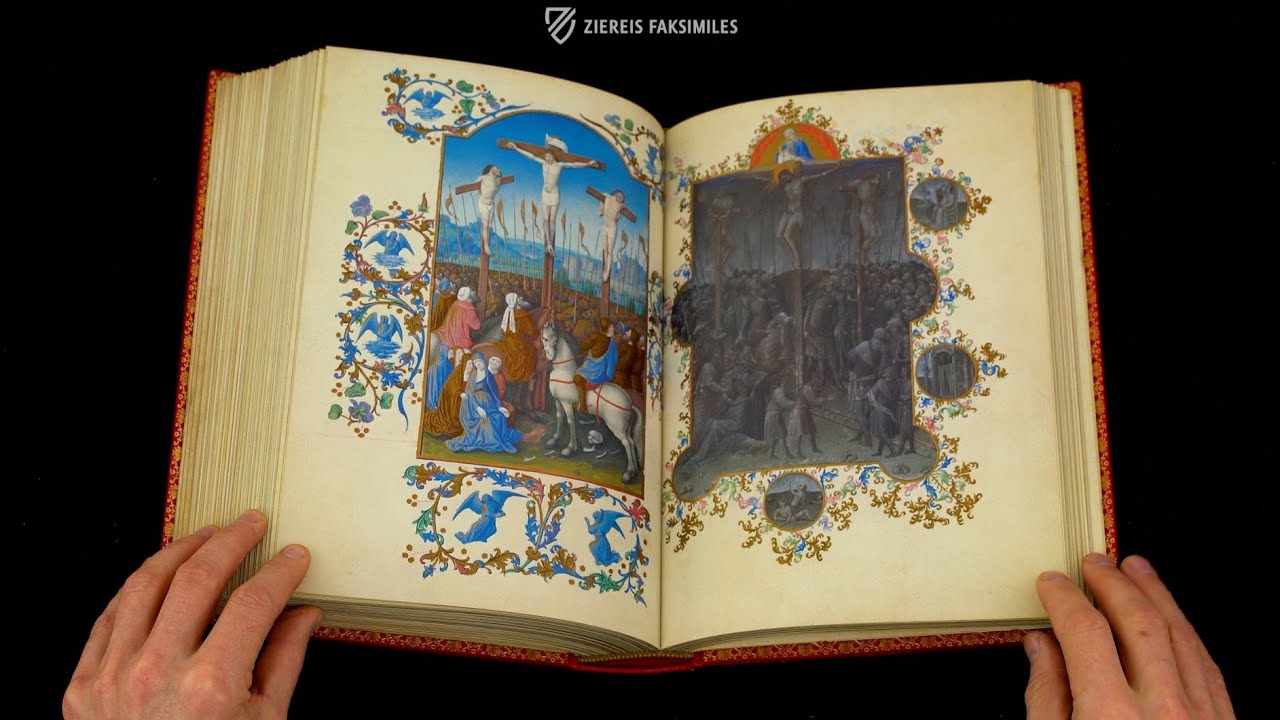 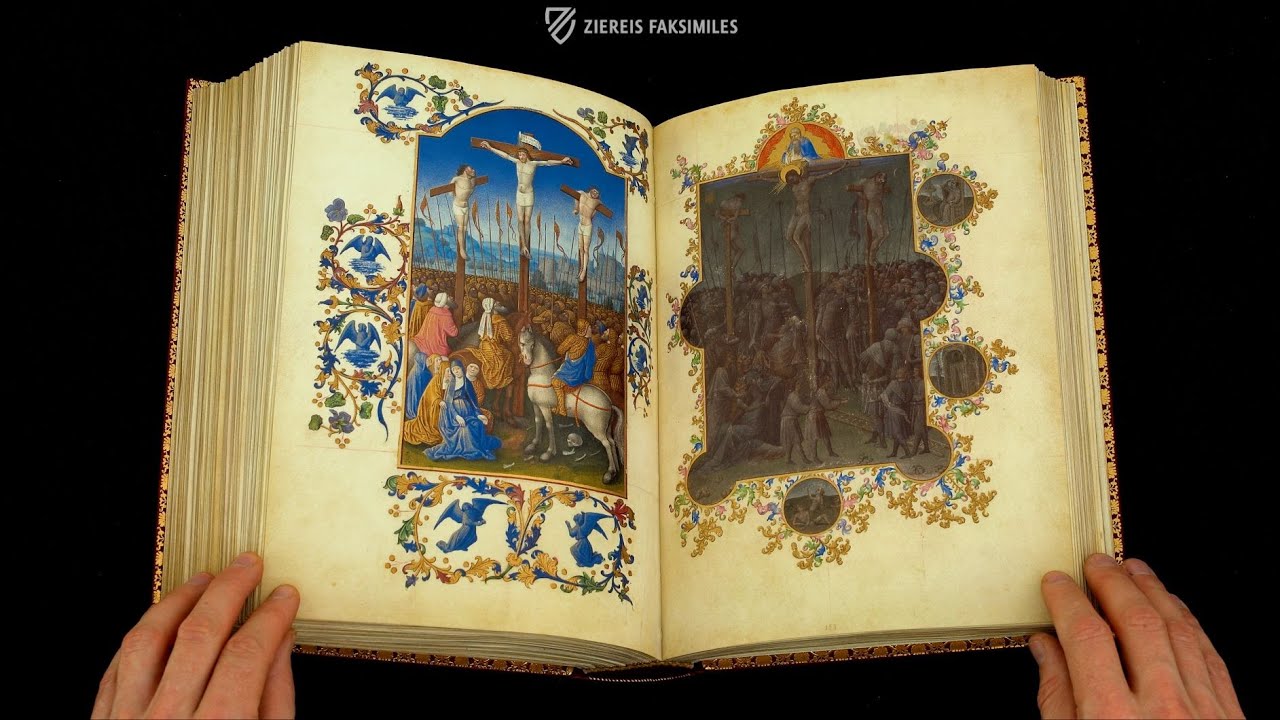 Publisher: Franco Cosimo Panini Editore – Modena, 2011
Limited Edition: 550 copies
Binding: Binding in red leather embossed with gold, covers feature coats of arms of the Serra (front) and Spinola (back) families Presented with the commentary volume in a white Solander box with the Annunciation miniature from the manuscript and title printed in gold on the spine
Commentary: 1 volume by Patricia Stirnemann, Inès Villela-Petit, and Emmanuelle Toulet
Language: Italian
1 volume: Exact reproduction of the original document (extent, color and size) Reproduction of the entire original document as detailed as possible (scope, format, colors). The binding may not correspond to the original or current document binding.
Price Category: €€€€€ (over 10,000€)
Edition available
Price: Log in here!
Order / Ask a Question

Faksimile Verlag – Lucerne, 1994
Publisher: Faksimile Verlag – Lucerne, 1994
Binding: Leaves in exclusively designed jewelry box covered with red velvet and the coat of arms of the Duc de Berry
Commentary: 1 volume
Languages: German, French
1 volume: 12 leaves under passe-partouts: Exact reproduction of the original document (extent, color and size) Partial reproduction of the original document as detailed as possible (scope, format, colors). The binding may not correspond to the original or current document binding. Contains the 12 magnifcent Labors of the Months from the calendar of the Très Riches Heures du Duc de Berry.
Regular price without login (like new)490 €
Log in for a Better Price!
Order / Ask a Question
You might also be interested in: 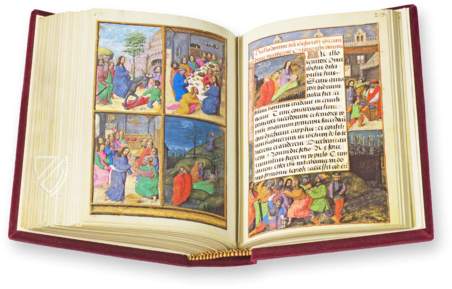 A Flemish masterpiece by Gerard Horenbout and the famous Maximilian Master: the wedding gift of King James IV of Scotland to his wife