The Ottonian Renaissance produced some of the greatest, most lavishly adorned and bound masterpieces of the entire Middle Ages. It was a rich but relatively short-lived renaissance associated with the Ottonian dynasty (919-1024), but which outlived them, gradually evolving into the German Romanesque. Stylistically, Ottonian manuscripts built on Carolingian traditions and consciously sought to imitate Late Antique and Byzantine artistic traditions. Ottonian Illumination is characterized by rich materials like Byzantine-style burnished gold backgrounds, gold and silver ink, and rich, flat colors from exotic materials. This grand, monumental style of illumination was an expression of a renewed belief in the Holy Roman Empire, and a desire to be seen as equals by the Byzantines. Thus, splendid codices from that time were also used as political statements, and in their paintings the Ottonian kings and emperors had themselves crowned by God.

Vibrant colors made from precious pigments, extensive use of highly burnished gold, and stylized figures: an expressive style of painting brought to the highest perfection! Even today, one cannot help but to be enthralled by the lavishly illuminated deluxe manuscripts, which the monks on the island of Reichenau created for the Ottonian rulers as well as for important patrons of the imperial court in the 10th and 11th centuries. In fact, Reichenau Monastery was at the center of Ottonian art and the illuminated manuscripts produced by the so-called Reichenau school during this period continue to fascinate people today. Every page of these manuscripts evokes a solemn aura of the sublime and the sacred. In 2003, the UNESCO committee decided to inscribe ten of these works on the Memory of the World Register. The facsimile cassette published by Quaternio Editions Lucerne provides an insight into the wonderful imagery of these Ottonian masterpieces.

A Grand and Monumental Style

Ottonian art was produced primarily in modern Germany as well as northern Italy and the Low Countries. A continuation of Carolingian Illumination, Ottonian Illumination was strongly influenced by Late Antique and Byzantine Art, looking to them both for aesthetic inspiration and for the political implications of these classical forms as the kings of Germany claimed the mantle of Roman Emperor. Its compositions appear static, often relying on expressive glances and gestures with elongated fingers. Some Insular influences can also be seen in Ottonian art, especially with regard to marginal interlace patterns, large decorative initials, and incipit pages in particular. Ottonian Illumination is distinguished by a grand aesthetic, sometimes cumbersome in its early period, but then ca. 1000 "a solemn monumentality is combined with a vibrant inwardness, an unworldly, visionary quality with sharp attention to actuality, surface patterns of flowing lines and rich bright colors with passionate emotionalism". Often furnished with luxurious bindings, Ottonian manuscripts are counted among some of the greatest masterpieces in all of medieval manuscript art.

Illuminated manuscripts made at Reichenau Abbey are among the most magnificent works of art created under the Ottonian monarchs. At that time, the Benedictine Abbey on the island of Reichenau in Lake Constance was one of the major cultural and scholarly centers of the East Frankish Empire. The scriptorium housed at Reichenau Abbey produced deluxe manuscripts of great beauty with an aesthetic that markedly influenced Ottonian art. The Abbey of Reichenau was founded in 724 by Saint Pirmin (d. 753), a Hiberno-Frankish itinerant Bishop, on an island in Lake Constance. Under Charlemagne, the abbey ranked among the great Frankish imperial monasteries and gained even more influence under the Ottonian dynasty. The scriptorium produced illuminated manuscripts of outstanding artistic quality for emperors, kings, and members of the higher clergy under the abbots Witigowo, Immo, and Berno (985-1048) in particular. At least 58 deluxe manuscripts from the ‘Reichenau School’ have survived to the present, but only seven of these works record the names of their scribes and illuminators been preserved. 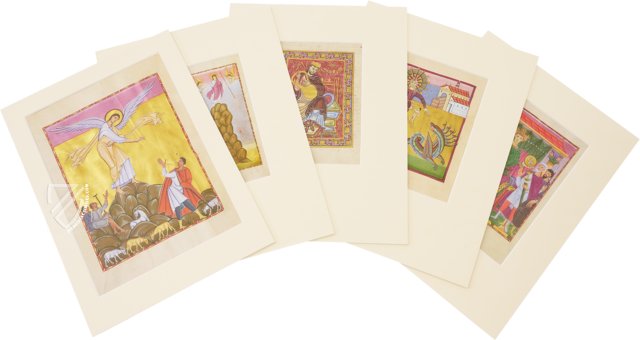 Christ’s triumphal entry into Jerusalem, celebrated each year on Palm Sunday, marks the beginning of the Passion cycle. Christ is depicted riding on a humble donkey, which symbolizes peace in contrast to a mighty warhorse. He is followed by a procession of his barefooted disciples and is greeted by the shod citizens of Jerusalem. They are depicted presumably greeting the entourage outside of the city because no architectures can be seen, just a very inaccurate-looking palm tree. Some of the people break off branches from the tree to throw onto the road alongside their colorful cloaks; all of them are dressed in classical Roman robes. 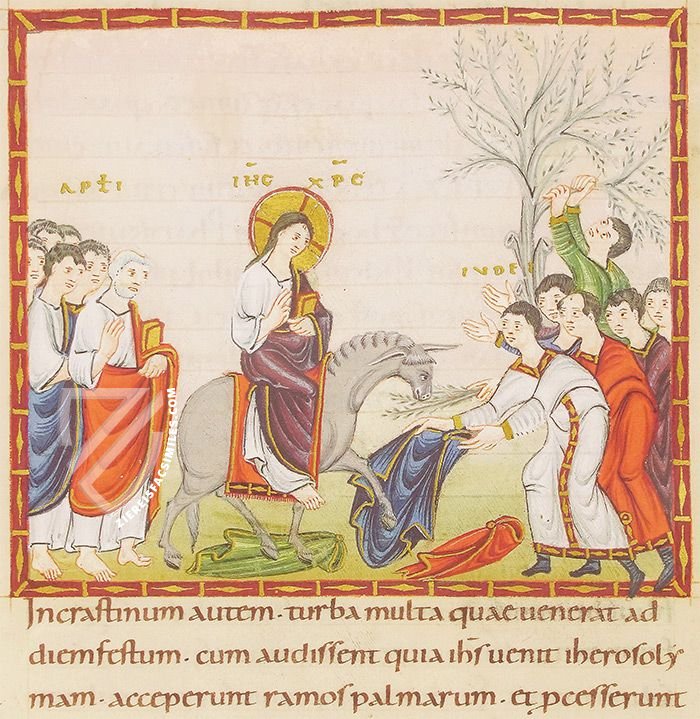 This brightly-colored double-page miniature is a masterpiece of Ottonian illumination and a famous representation of the power of the Holy Roman Empire. The artists of Reichenau’s scriptorium drew from Byzantine and Carolingian examples, both of which were firmly rooted in the style of Late Antiquity. Thus, Otto is formidably presented in the purple robes of a Roman emperor.

Otto is enthroned with the imperial crown, orb, and eagle scepter of Augustus. He is flanked by clerics to the left and noble knights to the right. Four figures representing the peoples of the empire – Sclavinia, Germania, Gallia, and Roma – humbly approach with gifts consisting of a shell filled with gems, a palm branch, a cornucopia, and a golden globe. 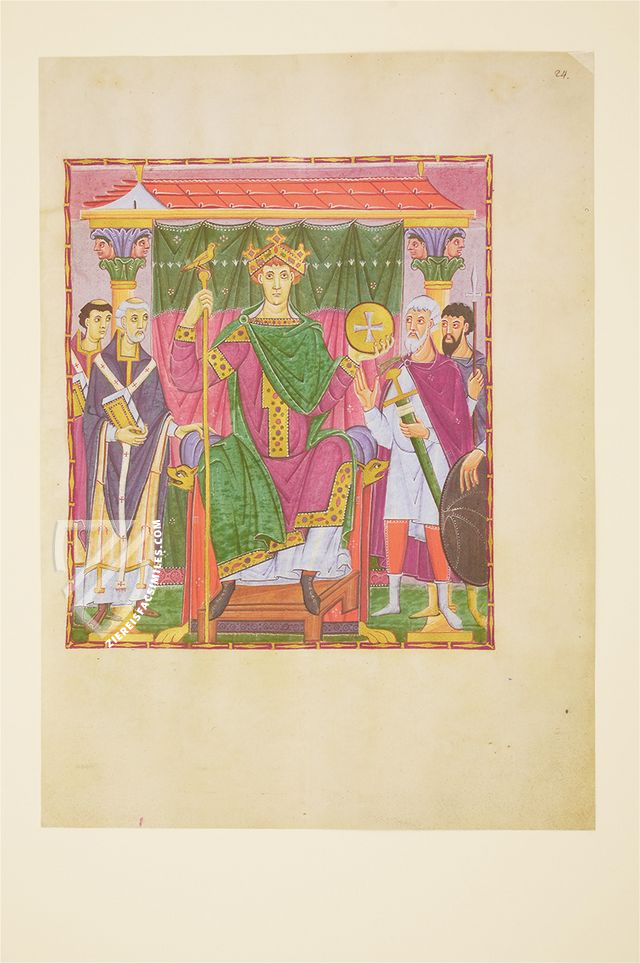 Quaternio Verlag Luzern – Lucerne, 2018
Publisher: Quaternio Verlag Luzern – Lucerne, 2018
Limited Edition: 800 copies
Binding: Handmade cassette with a replication of a carved ivory panel created for the Magdeburg Cathedral (now kept in the British Museum).
1 volume: 10 leaves under passe-partouts: Exact reproduction of the original document (extent, color and size) Reproduction of the entire original document as detailed as possible (scope, format, colors). The binding may not correspond to the original or current document binding.
Price Category: € (under 1,000€)
Edition available
Price: Log in here!
Order / Ask a Question
You might also be interested in: 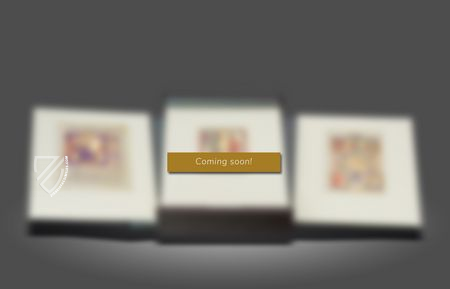