In the Middle Ages, the everyday lives of people were shaped by superstition and mystical prophecy. The politics of the day were in the hands of clerics and the political sovereign of the Christian world was the respective incumbent pope. The so-called Vaticinia Pontificum contains prophecies about the popes who were invested into the highest office of the Catholic Church in the course of the 13th and 14th centuries. The popes are pictured here in high-quality illuminations in portrait together with allegorical animals and mythical creatures.

The word Vaticinia is the Latin term for prophecies or predictions. The collection of documents with the title Vaticinia Pontificum is a unique manuscript that presents prophecies concerning the lives and works of the popes during the Middle Ages. The edition of the Vaticinia Pontificum presented before us is furnished with incomparably-beautiful illustrations. 46 unbelievably fanciful, colorful miniatures depict the popes from Nicolaus III to Eugene IV in portrait, along with allegorical animals and mythical creatures. Although the masterly work was ascribed to the Italian monk Gioacchino da Fiore for a long time, this assumption has admittedly been refuted by recent research.

Joachin of Fiore – as his name reads in English – was an abbot and founder of an order in Calabria and a theological historian in the 12th century. The gifted scholar achieved fame above all because of his specific view of history and his salvation-historical worldview. His teachings were amalgamated under the name of the “Theory of the Three Ages”. He subdivided the history of the world and humanity in three historical eras, which he connected with the Holy Trinity. It was believed for a long time, because of his stirring creativity in the 13th century, that the Vaticinia Pontificum with its salvation-historical worldview, was created by Joachim of Fiore. Since this assumption has been proven false by the most recent research, the actual author of the work cannot be determined, and so one now refers to the author of the Vaticiniaperforce as the Pseudo-Gioacchino. The dreamlike pictures were designed by the most gifted Italian court painters of the Middle Ages. Among them were the famous Master of the Vitae Imperatorum, who was employed at the court of Filippo Maria Visconti.

The Destiny of the Catholic Church

The Vaticinia are a series of prophecies about the popes who were invested into the highest office of the Catholic Church in the course of the 13th and 14th centuries. The allegorical, mythical text interpreted the influence of the popes at that time on the destiny of the Catholic community worldwide with the help of its metaphorically-charged illustrations. Pope Urban VI is described here as a devilish monster of the apocalypse. He was a pope during the time period that immediately followed the Avignon Papacy and was the first pope since 1309 who did not have his seat in Avignon, but in Rome. His ouster loosed a chain of adverse events that ultimately lead to the Great Western Schism. This was the greatest fault line to occur within the Catholic Church and went on for nearly 40 years. In the Vaticinia, Urban’s influence on this significant religious conflict is more closely discussed in mysterious visual language.

In the course of history, the universally-coveted masterpiece found itself in the possession of numerous famous personalities. It belonged to the art collector Francesco Antonio Bonali for a long time, though the most famous owner of the precious text was indeed the Italian artist Pelagio Palagi. The painter, sculptor, and furniture designer from Turin was interested in Egyptian, Greek, Etruscan, and Roman sculptures and was known worldwide as a book collector. The precious Vaticinia remained in his private library until the artist’s death. In his will, the book was left to the Biblioteca dell'Archiginnasio in the Italian art metropolis of Bologna, where it is housed today. 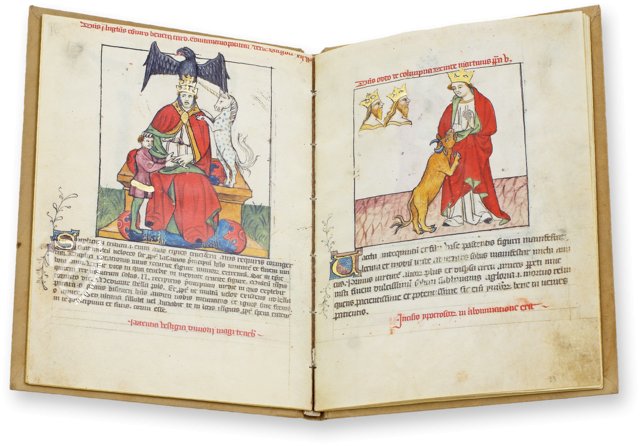 Born Bartolomeo Prignano, Urban VI was native to a place called Inferno near Naples, a region of Italy famous for its natural hot springs that bubble up from deep in the earth. He sat on the throne of Saint Peter from 1378 to 1389 in the aftermath of the Avignon Papacy and at the dawn of the Western Schism, a low point in church history. He had a reputation for harshness in trying to reform the church, which earned him few friends and embroiled him in a war with the Antipope Clement VII. 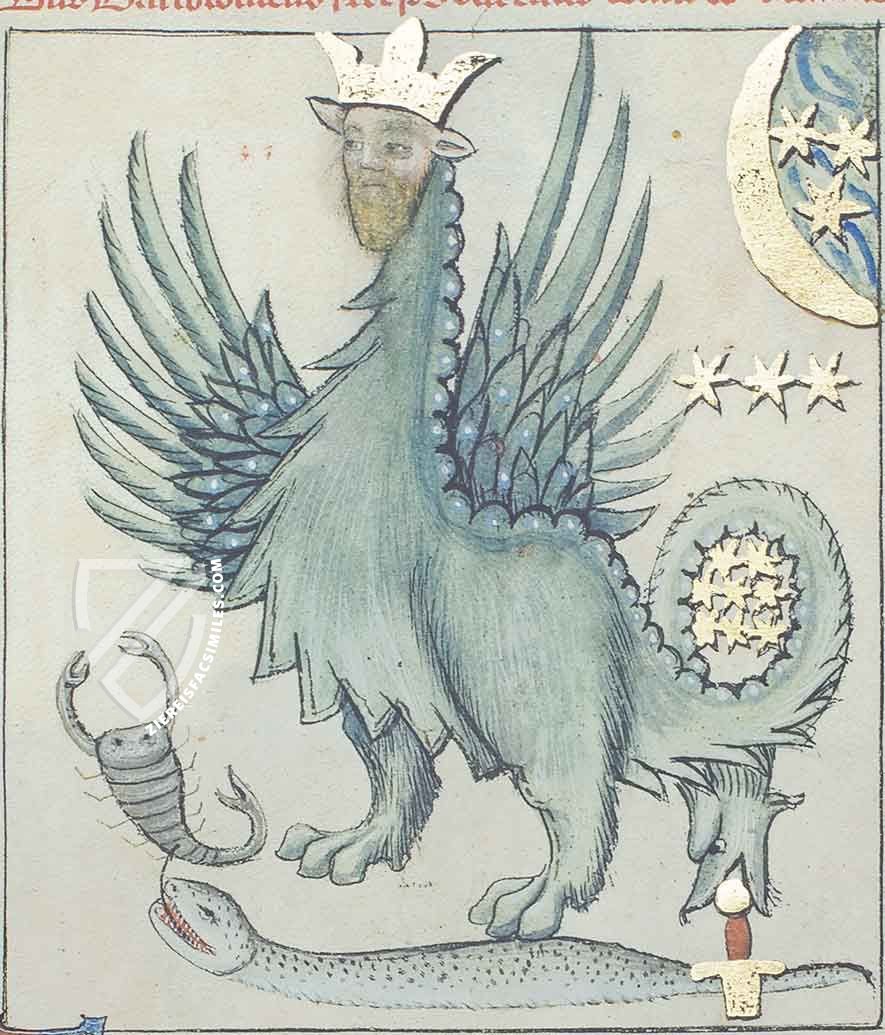 Reigning from 1362 to 1370, Urban V was the only Avignon pope to be beatified and a strict adherent of the modest Benedictine Rule. His efforts as a reformer gained him a great deal of opposition among the privileged princes of the church who were used to opulent lifestyles, but was also celebrated for leading military campaigns in an attempt to return the papacy to Rome.

Resting on blue cushions, Urban V is draped in a red cloak lined with green and wears a golden crown. His legitimacy and divine favor are symbolized by the golden key of St. Peter being handed to him by an angel, who also has a golden halo. Threatening the peacock, symbol of pride, with the red scourge in his right hand symbolizes his attempts to reform the church. 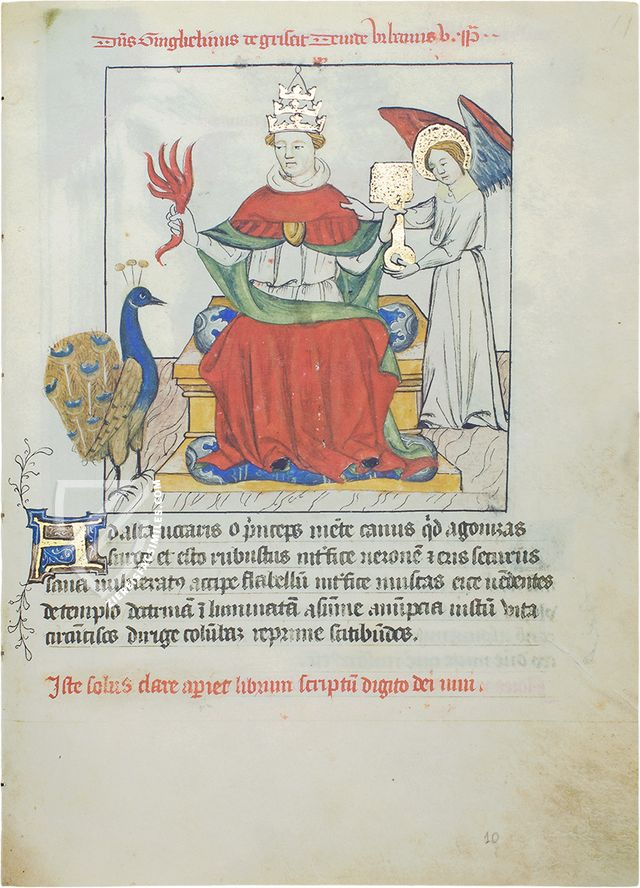 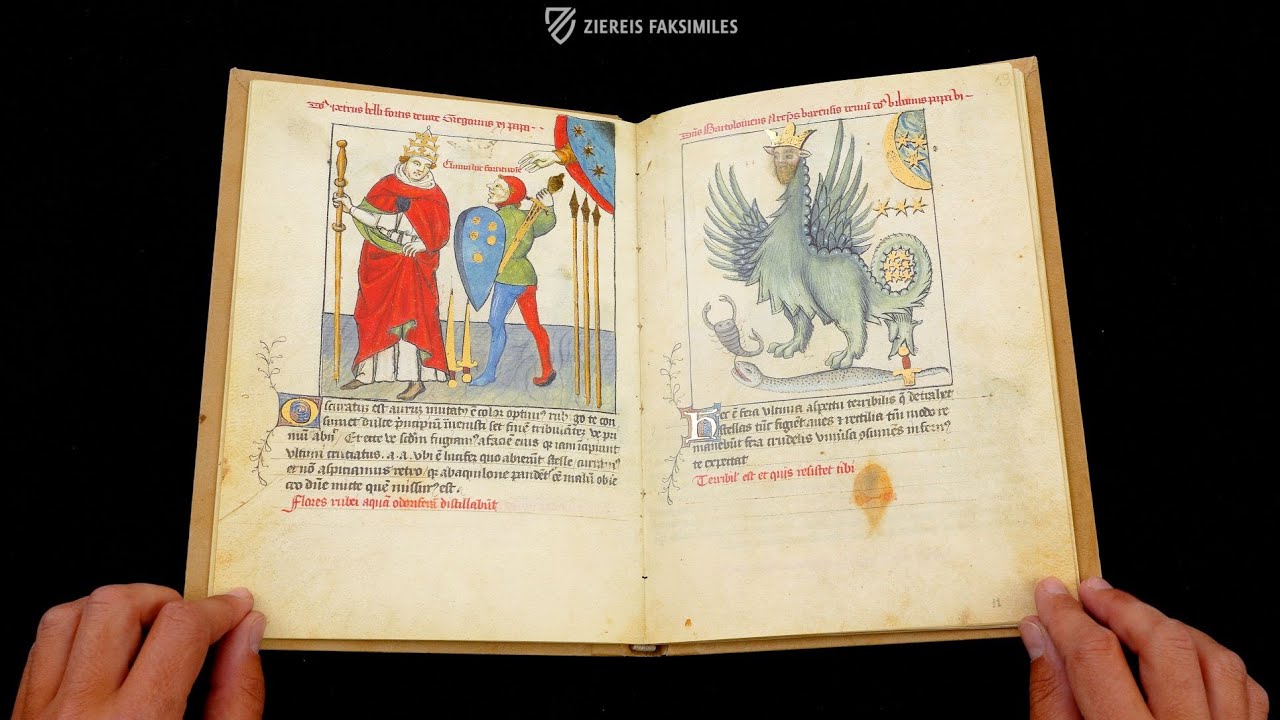 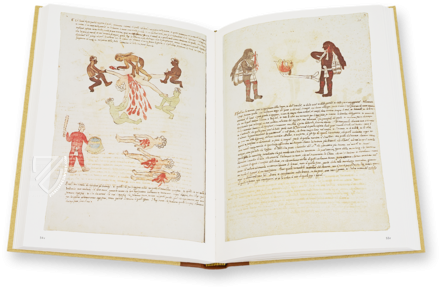 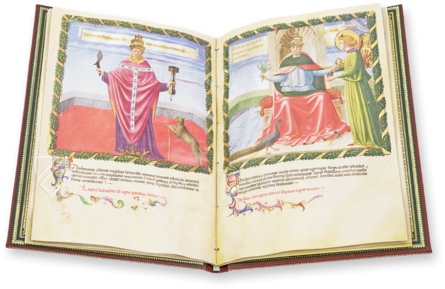