Referred to in German as the Riesencodex or “giant codex” due to its size and weight – 15 kilograms, 481 folios, secured with an iron chain, and measuring 30 x 45 cm – the Wiesbaden Codex is an encyclopedia comprising the collected works of the famous medieval polymath and visionary Hildegard von Bingen. It is named after its modern repository in Wiesbaden, Germany. Only her medical writings and some of her letters are missing from the manuscript, work on which was likely started at the end of her life or shortly after her death in 1179. The manuscript was originally designed by Volmar, Hildegard’s first secretary, but was heavily edited and then executed by Guibert of Gembloux, her final secretary. These changes are apparently in accordance with Hildegard’s wishes in her final days. The work of several scribes can be discerned from the text, which is neatly written using red and black ink in two columns. This facsimile contains the section of the original manuscript, which is dedicated to Hildegard's musical compositions.

The massive tome stored under the shelf mark Hs. 2 of the Hessian State Library, which was incorporated into the library of the RheinMain University of Applied Sciences in 2011, is the most precious and valuable book in the collection because it contains the collected works of the medieval German abbess, polymath, and visionary Hildegard von Bingen, except for her medical and scientific treatises. It has been theorized that these were recorded in a second volume that has not survived or was ever complete. Dating from the late 12th century, it was begun around or just after the end of her life and was created in the scriptorium of Rupertsberg Monastery near Bingen.
Many consider the manuscript to be a relic and icon of the spirit of Saint Hildegard. It is sometimes referred to as the Wiesbaden Codex because of where it is stored, or the Giant Codex due to its size, or the Chain Codex for the iron chain that secures it. Measuring 46 x 30 cm, the codex contains 481 parchment folios and weighs 15 kg, but the facsimile presented here contains the musical section found on folios 466-481.

History of a Book Treasure

The codex was commissioned by one of Hildegard’s final secretaries, either Volmar von Disibodenberg or Guibert of Gembloux, who are also believed to have served as scribes. It was kept in the Rupertsberg Monastery until the 15th or 16th century, when it was rebound in the Johannisberg Monastery in the Rheingau region and fitted with its iron chain to secure it against theft before being returned to Rupertsberg. During the Thirty Years’ War, it was saved from destruction at the hand of marauding Swedish troops when it was brought together with a collection of relics received as gifts or collected by Hildegard to Eibingen, a daughter monastery of Rupertsberg.
During the course of Secularization, the manuscript passed into the possession of the Duchy of Nassau in 1814 and was placed in the Nassau State Library, which became the Hessian State Library. Its binding had to be repaired after the manuscript was damaged while being transported in 1928. It survived the Second World War undamaged despite being stored in Dresden and, unlike many other manuscripts in the Soviet Zone of occupation, was returned to Wiesbaden in 1948. 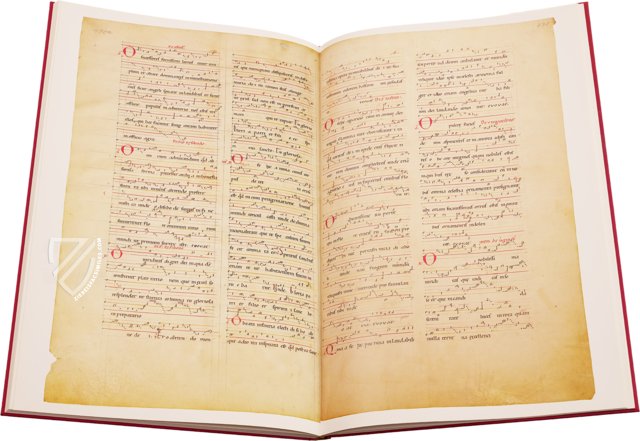 A large red “O” initial with a flourish in the middle introduces the phrase “O splendidissima gemma” and the abbreviated red text to the right stands for A(ntiphona) d(e) S(ancta) Maria. In the final vision of her Liber Scivias, Hildegard hears celestial choirs singing in praise of the Virgin Queen of Heaven and this antiphon found on fol. 466v is the first piece in that heavenly symphony. Its opening image is that of a gemstone refracting sunlight, which literally becomes a lens through which Hildegard glimpses the entirety of salvation history. 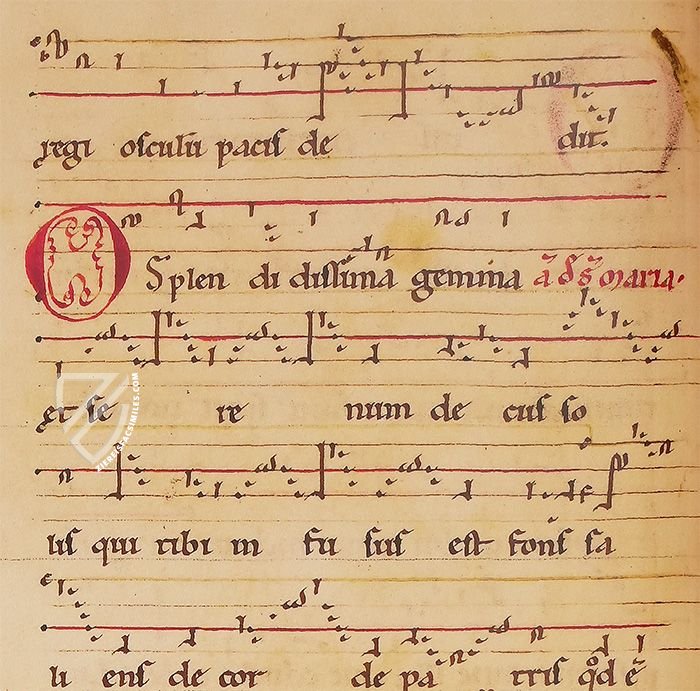 The antiphons in the left column of this page are a continuation of a cycle concerning Saint Ursula. According to the Roman Martyrology, she was a Romano-British Christian princess accompanied by 11,000 virginal handmaidens on pilgrimage to Rome who, upon their return journey to Gaul where she was to be married, were all killed by Huns besieging Cologne in the year 383. The right column contains two more antiphons, one devoted to the Holy Innocents and the other used for the official Dedication of churches.

This page is the work of a skilled scribe who has also been identified as being one of the hands that created the Scivias manuscript, which means it is undoubtedly the work of the scriptorium in the cloister at Rupertsberg. Featuring 17 “systems” or ensemble staves in red and brown ink per column, the page is neatly and clearly designed so that both the notation and the text are clearly visible. If anything, the scribe left an abundance of space in the margins. 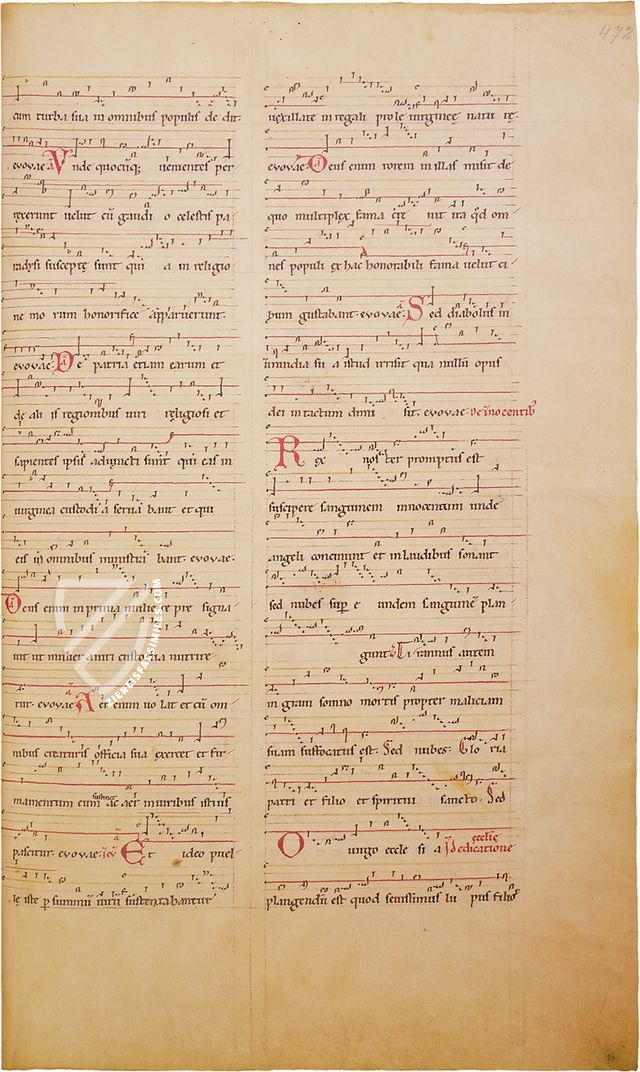 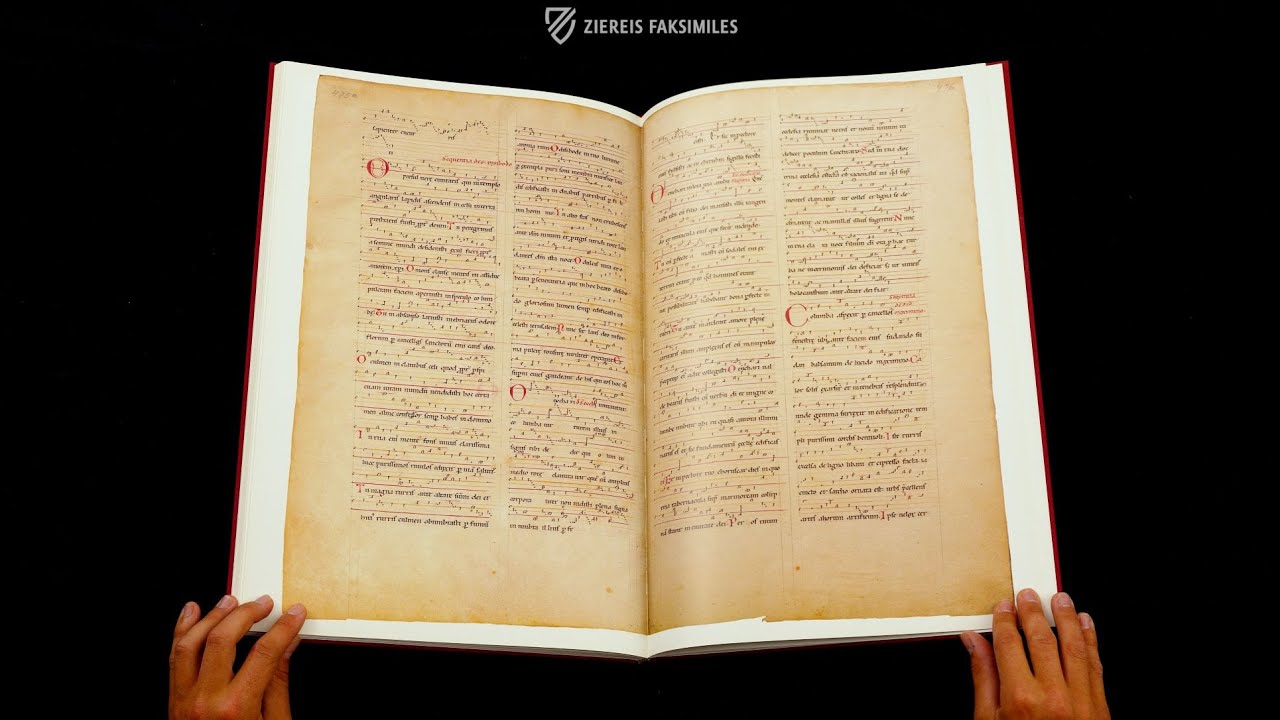 Publisher: Reichert Verlag – Wiesbaden, 1998
Binding: Red linen binding
Commentary: 1 volume by Michael Klaper
Languages: English, German
1 volume: This facsimile is not complete. Reproduction of the folios 466-481 (Symphonia and Ordo virtutum) of the original document as detailed as possible (scope, format, colors). The binding may not correspond to the original or current document binding.
Regular price without login (like new)790 €
Log in for a Better Price!
Order / Ask a Question
You might also be interested in: 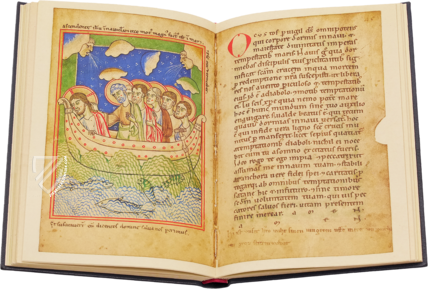 Decorated with 72 Romanesque miniatures from the Old and New Testaments: the personal prayer book of the famous abbess, writer, philosopher, and mystic Hildegard von Bingen