The Gradual of Gisela von Kerssenbrock is a medieval hymnal for the Gregorian choir of the Cistercian order at Marienbrunn bei Osnabrück. It was created around 1300 by the conductress Gisela von Kerssenbrock and was used at the Marienbrunn Nunnery for around 500 years. The work is renowned for its 53 magnificent historiated initials, 15 blue and gold initials entangled with flaming red tendrils, as well as 200 small, gold initials with blue and red backgrounds. Unlike most graduals, which contained around 650 hymns, the Codex Gisle has nearly 1,500 hymns in either an abbreviated or completed form. Therefore, the manuscript is not only one of the most comprehensive medieval musical codices but is also more thoroughly and elaborately decorated than any other work of its kind.

The Gradual of Gisela von Kerssenbrock

A gradual is a collection of all Latin hymns, which accompanied daily mass in monastic orders and were sung by Gregorian choirs. Such a gradual of truly exceptional quality originates from the Marienbrunn Convent in Rulle bei Osnabrück. The Gradual of Gisela von Kerssenbrock was drafted around 1300 by its namesake, Gisela of Kerssenbrock. She wrote down the notation for the Latin hymns and masterfully illustrated the pages of her work with gold initials on a polished gold background. In total the codex contains 53 embellished initials, some taking up a whole page. Additionally, there are 15 blue and gold initials entangled with flaming red tendrils, as well as 200 small gold initials with blue and red backgrounds.

The Word of God in Daily Hymns

The Gregorian choral singing was probably the most important and indispensable element of mass in medieval cloisters. The accompanied the important liturgical sacraments such as the entrance into the church, the preparation of the Eucharist, and the act of Communion. Usually a gradual from the 13th century contained around 650 hymns. The Gisela codex had a much greater volume. Nearly 1,500 hymns were contained therein in either an abbreviated or completed form.

Gisela – A Great Figure of the Abbey

Numerous depictions of nuns in their habits are recorded in the codex. One of the nuns depicted is explicitly identified as Gisela. Thereby it is verifiable that this was the Westphalian noblewoman Gisela von Kerssenbrock. She was the conductress of the choir in the Cistercian cloister of Marienbrunn. She organized the choir and the soloists, selected pieces for mass several times a day, instructed her fellow sisters in song, oversaw the library and scriptorium of the cloister, and was responsible for the production of musical manuscripts. She had one of the most important positions within the convent and applied herself to this assignment with devotion. The Codex Gisle is her most magnificent and elaborate work of art.

An Exceptional Treasure Trove of Images

As was usual in medieval graduals, the Codex Gisle limits its pictorial decoration to initials. This example is certainly decorated to so great an extent as no other work of its type. The initials were elaborated partly with whole page miniatures, which are upheld in tones of luminous blue and red and are set apart with shimmering gold backgrounds. The choirmistress Gisela impressed her deeply felt beliefs with sensible, ingenious pictures of biblical scenes. The meaning of respective hymns can be understood through the size of the text and the richness of the decoration.

The Codex Gisle is the artistic embodiment of the convent Marienbrunn bei Osnabrück. The gradual was in use for 500 years in one of the first 25 Westphalian nunneries of the Cistercian Order. During the period of secularization, the work came into the possession of the suffragan bishop of Osnabrück Karl Klemens, and is stored in the Diocese Archive of Osnabrück. 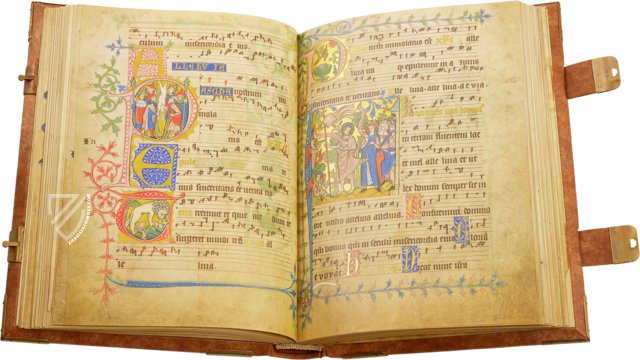 Tree of Jesse and Annunciation to the Shepherds

This fine historiated “L” initial consisting of deep blue acanthus leaves with a gold leaf background combines two popular scenes from the Nativity of Jesus. The main scene depicts the event described in the Gospel of Luke 2 when, moments after Mary gives birth, an angel of the Lord appears to shepherds tending their herd in a nearby field to bring them “good tidings of great joy”. A condensed Tree of Jesse on the left traces the genealogy of Christ to the kings of the ancient Israelites through his mother. 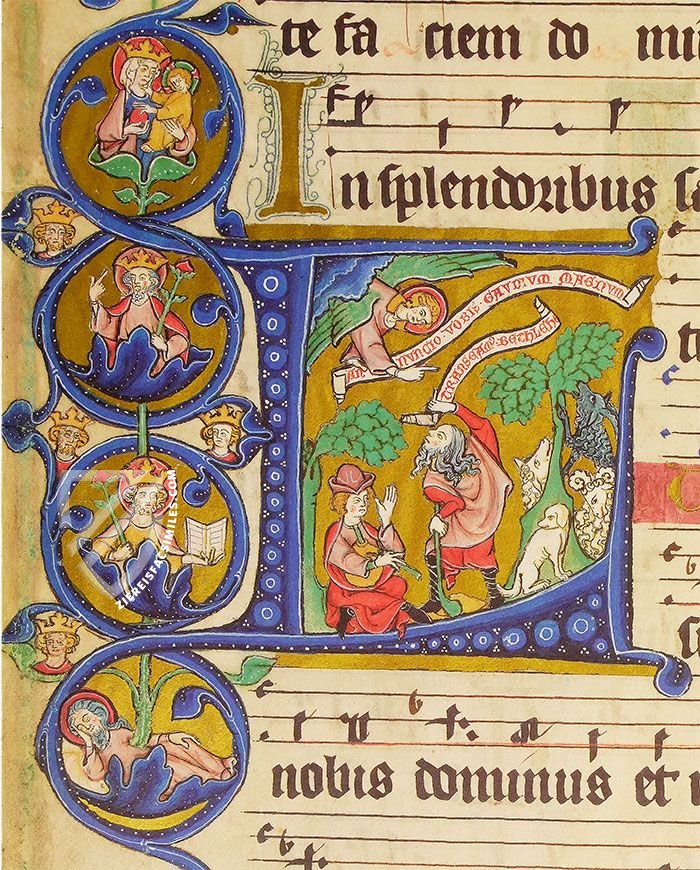 Initial Page for the Introit of Easter Sunday

Easter is not only the center of the Christian faith, but also the climax of the illustrations in the Codex Gisle. This initial page for the Introit of Easter Sunday is accordingly graceful with carefully considered compositions of depth. While three Old Testament prophets in the bas-de-page form the foundation for the entire page, the seven-line R initial is framed at its four corners by the Four Evangelists in medallions. It introduces the Introit: "Ressurexi et adhuc tecum sum. - I am risen and always with you."

In its upper half, the initial shows the resurrected Christ in his special union with God the Father, who calls him to resurrection on his banner: "Ex(s)urge gl(ori)a mea! - Arise, my glory!" On the left outside the upper half of the initial stem, the nun Gisela has assigned herself a place as a devout observer of the scene, recording her name in red letters. The lower half of the R initial shows Christ's descent into limbo, where he treads victoriously on the conquered Devil and frees the souls imprisoned there. He first seizes the hand of Adam, who joyfully responds to him in his banner in Latin: "Behold the hands that created me!" (Job 10:8) 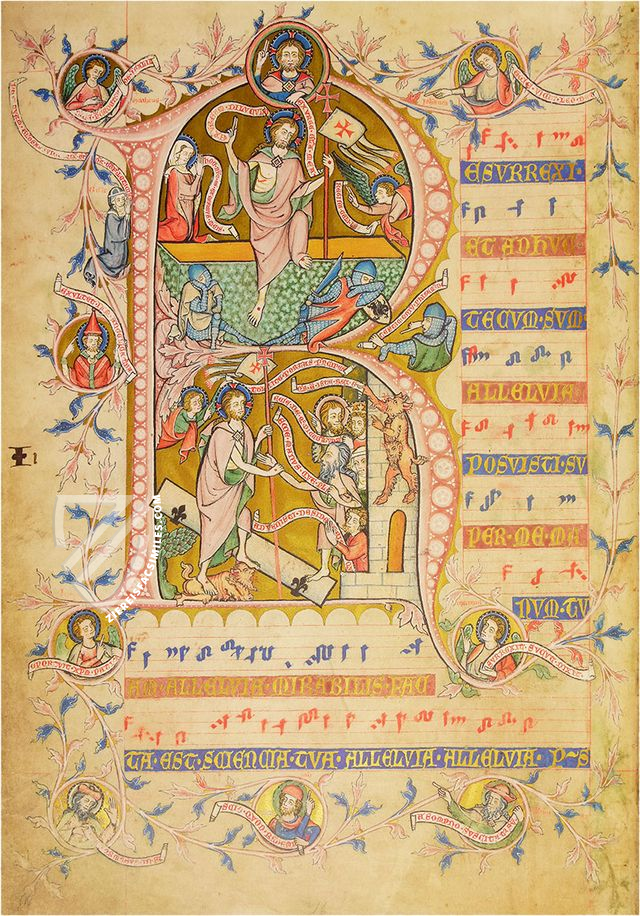 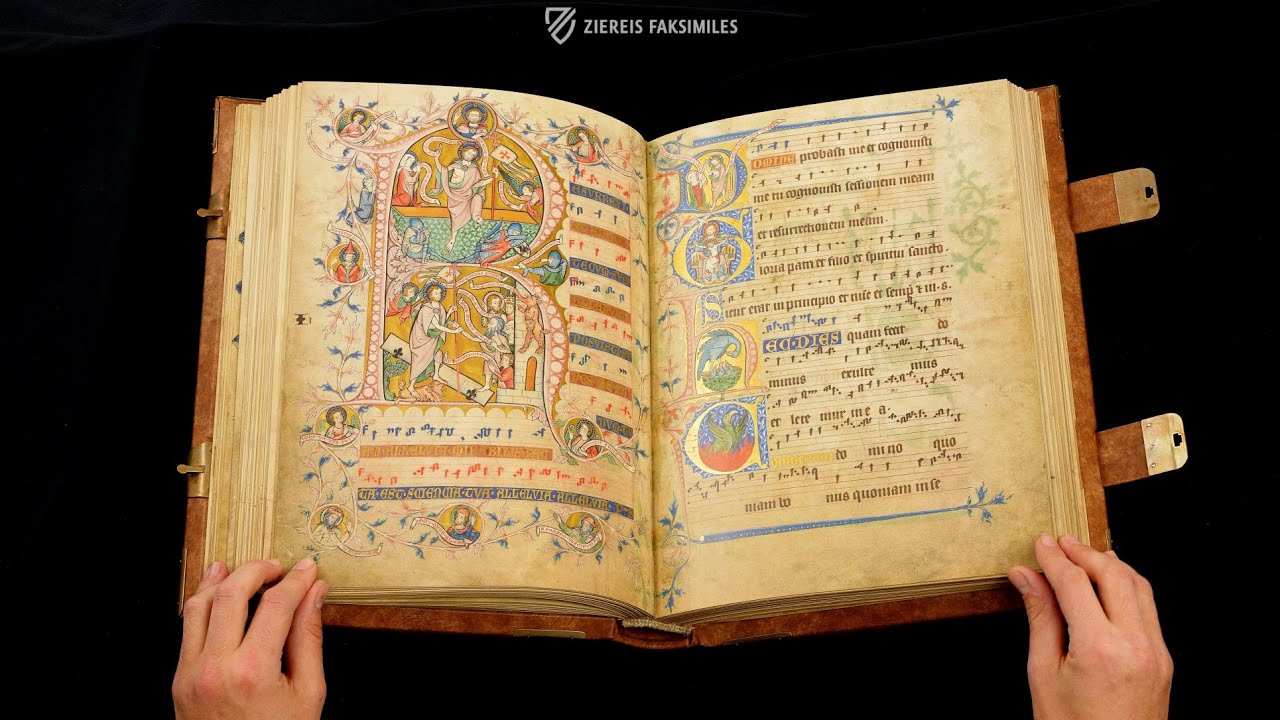 Publisher: Quaternio Verlag Luzern – Lucerne, 2014
Limited Edition: 480 copies
Binding: Faithful replica of the original: leather with embossings, corner pieces, and two brass clasps
Commentary: 1 volume by Harald Wolter-von dem Knesebeck, Fabian Kolb, and Hermann Queckenstedt
Language: German
1 volume: Exact reproduction of the original document (extent, color and size) Reproduction of the entire original document as detailed as possible (scope, format, colors). The binding may not correspond to the original or current document binding.
Regular price without login (like new)8,190 €
Log in for a Better Price!
Order / Ask a Question
You might also be interested in: 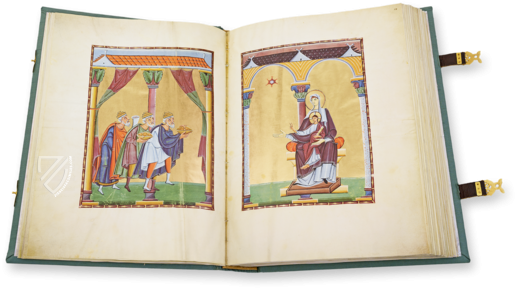 Made at Reichenau by order of Germany's only canonized emperor: one of the most beautiful, splendid, and largest masterpieces of Ottonian illumination