Short:
The fables of the ancient poet Aesop founded a completely new literary genre, namely the moralizing fable. These instructive stories have not lost their popularity today. Probably the most beautiful edition of the ancient poem is a unique illuminated manuscript, which was produced in Italy ca. 1489. The precious manuscript is furnished with numerous gorgeous miniatures, which make the stories comprehensible in exciting pictures.

The moralizing, instructive fables by the ancient Greek poet Aesop have not lost their meaning in the present day. Aesop is considered to be the father of European fables, to this day, his name stands as a nomen generiucum for the literary genre of fables. His work exists in numerous, various traditions and translations. A marvelously illuminated edition of the ancient fable was made in Italy in the late 15th century and is found today in the university library of the art metropolis of Bologna. This gorgeous, historically significant manuscript is embellished with a total of 147 richly-colored miniatures with elegantly shimmering gold-leaf.

The Origin of a Poetic Genre

Today, hardly any information is known about Aesop, the famous poet of antiquity. Numerous legends wrap themselves around the Greek poet, many of which already existed in the second half of the 5th century B.C.E. when the written record was attributed to his person. According to the historian Herodotus, the impoverished Aesop lived in the 6th century B.C.E.. He was poet and slave for Iadmon of Samos, to whom the famous hetaera Rhodopis also belonged, and was killed in Delphi. His fables are mythic and secular short stories, which take the form of parables**. The poet addressed everyday human weaknesses and flaws. Envy, stupidity, greed, vanity—these and other difficulties in the everyday lives of the inhabitants of Greece in the 6th century B.C.E. served as the foundation of the moralizing stories. The actors are animals, plants, even gods or known people of the time. The events of Aesop’s Fables possess an unmediated, obvious message or else a word of caution in the form of an allegory packed with meaning. Aesop’s Fables have been of immeasurable significance for the history of literature.

The 1489 Aesop’s Fables from the Biblioteca Universitaria di Bologna is a work that belongs among the most beautiful editions of the influential poem worldwide. Almost no direct references to either the artist or the patron of the precious manuscript exist, having said that, there are unambiguous assumptions about its origin story in the field of research. It can be assumed therefrom that the famous scion of the powerful Milanese ruling family, Gian Galezzo Visconti, commissioned a Lombard artist with its creation. The incomparable quality of the art book strengthens the connection to the Milanese court. The high artistic value of the illustrated text is particularly apparent in the exceptional depictions of animals, be it frog, swan, or lion, and their respective attitudes and movements. The depictions of natural and urban spaces inhabited by man and animal are of pronounced tenderness and finesse, the human figures appear lifelike and dynamic. Altogether, the illustrative part of the masterful codex with its numerous gold embellishments bespeaks the work of an exceedingly gifted artist. The miniatures make the forward-thinking and enlightened worldview of its designer clear. The illuminations runaway among one another like in a comic strip and are flanked by a Latin text that is furnished with marvelous initials. 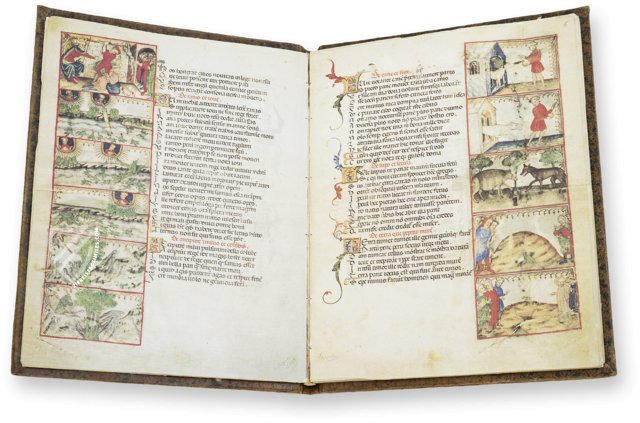 The Dog and Its Reflection

A dog carrying a stolen piece of meat looks down as it is crossing a stream and sees itself in the water. Mistaking its own reflection for another dog carrying something better, it opens its mouth to attack the "other" dog and in doing so drops what it was carrying. The story concerning the foolish human desire for more, rather than being content with what one has, became incorporated into medieval bestiary manuscripts and variants of the story appear in the Indian literary tradition. 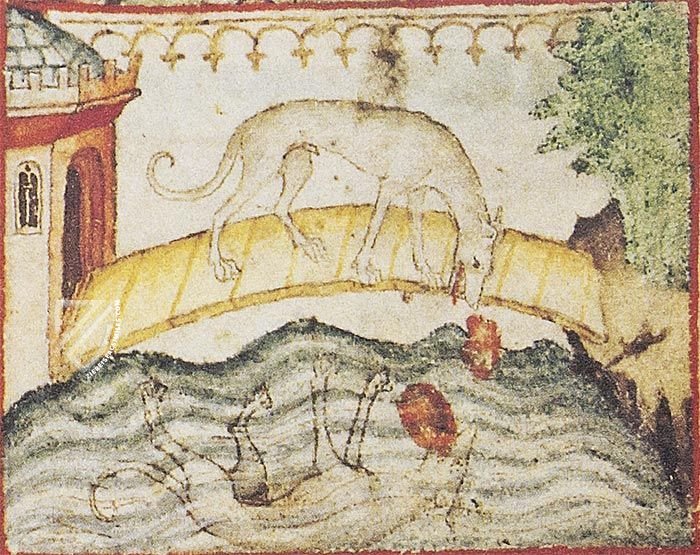 The Cock and the Jewel

The manuscript’s opening page reveals splendid Italian illumination blending the Gothic and Renaissance styles. A scene of students and a master, possibly meant to be Aesop, appears in the golden floral marginalia. In the upper-right miniature we can see The Walnut Tree, concerning ingratitude, while The Wolf and the Lamb, concerning tyrannical injustice, is shown at the bottom.

Depicted in the central miniature, a cock discovers a jewel in the dirt, the value of which he recognizes for others while rejecting it because it is worth less to him than a single grain of corn. Addressing the idea of relative values, The Cock and the Jewel was one of the most popular of Aesop’s Fables and appeared at the beginning of a standard medieval grammar text. 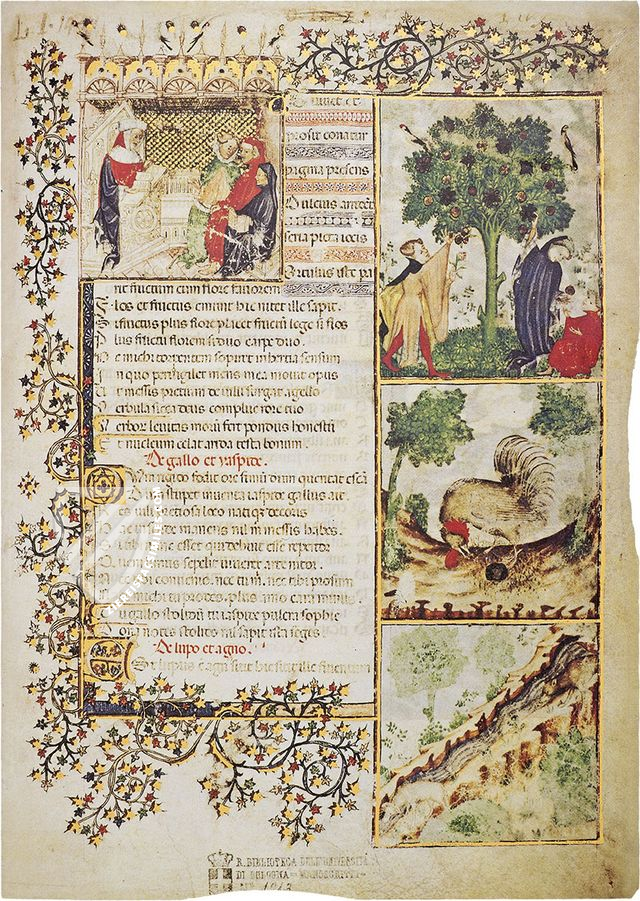