The Song of Roland is an Old French epic poem about the heroic death of Roland during one of the campaigns of Charlemagne (747/8–814). The tale, which survives today in seven complete specimens and three fragments was composed or at least written down by an otherwise unknown Turoldus. The specimen at hand is a manuscript stored in Venice, which originates from the 14th century and which consists of 3,846 verses instead of the usual 4,002. In the form of a Chanson de geste, the 291 strophes relate Charlemagne’s war against the Muslim Saracens from North Africa, who had occupied Southern and Central Spain since their European invasion in the year 711/12.

The Song of Roland is a heroic epic in Old French concerning Roland’s heroic demise during the campaign of Charlemagne (747/8–814) against the Muslim Saracens from North Africa. The story is related by an otherwise unknown Turoldus, who either composed it or wrote it down, perhaps from dictation or simply because it was often recited. Today, there are a total of seven manuscripts and three fragments in existence, whereby the specimen at hand is from the 14th century and both originates from and is stored in Venice. Instead of the typical 4,002 verses, it contains only 3,846. The core text is nevertheless considered to be centuries older.

The material, based on the campaign lead by Charlemagne against the Saracens in Spain in the year 778 was not merely famous in France. After seven long years of war, the western European monarch was able to reconquer all of Spain with the exception of the city of Saragossa. Intrigue ensues when the Moorish King Marsilius asks for peace negotiations. Ganelon, sent by Charlemagne to Marsilius, allies himself with the King of the Moors and plans an ambush in which Roland and other heroes lose their lives. When Charlemagne reaches the battlefield, he finds only the fallen and ends his Spanish campaign with a victory over Baligant, first among the princes of the Moors.

The Genre of Chanson de geste

The Song of Roland is one of the oldest and most famous works from the narrative genre of the Chanson de geste. This genre of French literature flourished above all during the 11th and 12th centuries, when its texts would have been mostly recited by professional travelling minstrels before large audiences. Today, there are still around 80 manuscripts of these songs of heroic exploits, which often dealt with the same heroic figure and frequently adopted elements from the legends of saints. 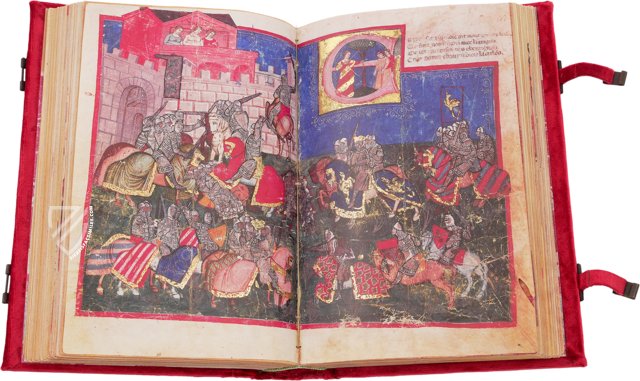