Although only representing a fragment of the erstwhile manuscript, the Carolingian Sacramentary belongs among the “gems” of the Austrian National Library. This calligraphic masterpiece was made in the Abbey of Saint-Amand in northern France, and although its original owner remains unknown, it can be assumed from the richness and care of its execution that it was destined for a reputed church or a high dignitary of the church, possibly as a little booklet with prayers and consecration formulas for a bishop’s use. Its rich adornment features a great diversity of calligraphy, accomplished frames and marginal decorations including gold and silver, and a combination of Anglo-Saxon ornamental motifs and Carolingian-Frankish scribal art that is found in very few manuscripts, making this sacramentary an exquisite monument to illumination.

The Carolingian Sacramentary belongs among the “gems” of the Austrian National Library, its priceless manuscripts, as one can see from the addition of the letter C (for Cimelien = gems) in the old signature Theol. C. 992. This calligraphic masterpiece was made in the Abbey of Saint-Amand in northern France. We know very little, however, about the commissioner of the manuscript. The richness and care of its execution make us assume that it was destined for a reputed church or a high dignitary of the church. Numerous remarks and glosses added in the margins and occasionally between the lines indicate that this precious manuscript was frequently used, and conveys a lively picture of the thinking at this period.

A Priceless Jewel for Liturgical Use

The literature frequently calls this manuscript a “sacramentary fragment” as some essential portions are missing. On a small number of pages, our codex contains a wonderfully written text of the Canon Missale and two pages of text for the consecration of a sub-deacon, of which only a few words at the beginning are lost. This might lead to the conclusion that the artistically decorated pages which were later bound in precious gold brocade constituted a little booklet with prayers and consecration formulas for a bishop’s use.

The texts were executed by several hands in different fonts, the Canon being enhanced by the use of gold ink. The text for the consecration of the sub-deacon and a portion of the Canon text are written in a very even Carolingian minuscule, the red headings on fol. 1r-v in capitalis rustica. The major portion of the canon text was written out by a calligrapher in solemn uncials. The numerous remarks and glosses added in the margins and between the lines bear testimony to the great diversity of calligraphy and provide a deep insight into the historical background of the manuscript. Neume annotations used on some pages above the lines guide the user as mnemonic aids through the melody.

The pages containing the Canon text are surrounded by rectangular ornamental frames the sides of which are filled with intensely entwined interlace making use of different patterns. While the interlace varies from page to page, the corner pieces resemble each other on each double page. A particularly elaborate and imaginative example is found in fol. 5v–6r, where silver bands, seemingly interlaced with the golden borders of the frame, end in animals’ heads whose beaks bite into the golden borders. Two pages hold, in prominent places, only one elaborately stylized word of text (fol. 4r: Vere [dignum et iustum] and fol. 5v: Te [igitur clementissime pater]. The letters are formed of golden borders decorated with elaborate interlace. Fine colorful dots not only line the shafts but also form delicate embroidery on the blank surfaces. This combination of Anglo-Saxon ornamental motifs and Carolingian-Frankish scribal art is found in very few manuscripts and makes this Sacramentary an exquisite monument to illumination. 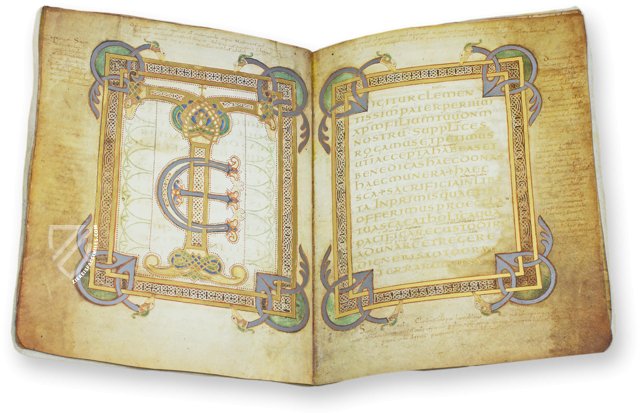 Large, elaborate initials were common in Carolingian art, a tradition inherited from the tradition of Insular manuscripts. This manuscript is full of ornamentation influenced by Anglo-Saxon jewelry and metalwork – this dual initial looks like it could be a candle stick or a cross on an altar. Aside from the perfectly-executed interlace patterns, it is noticeable for its animal heads, including a set of four bird’s heads on the tips of the silver “E” with interlocking beaks. 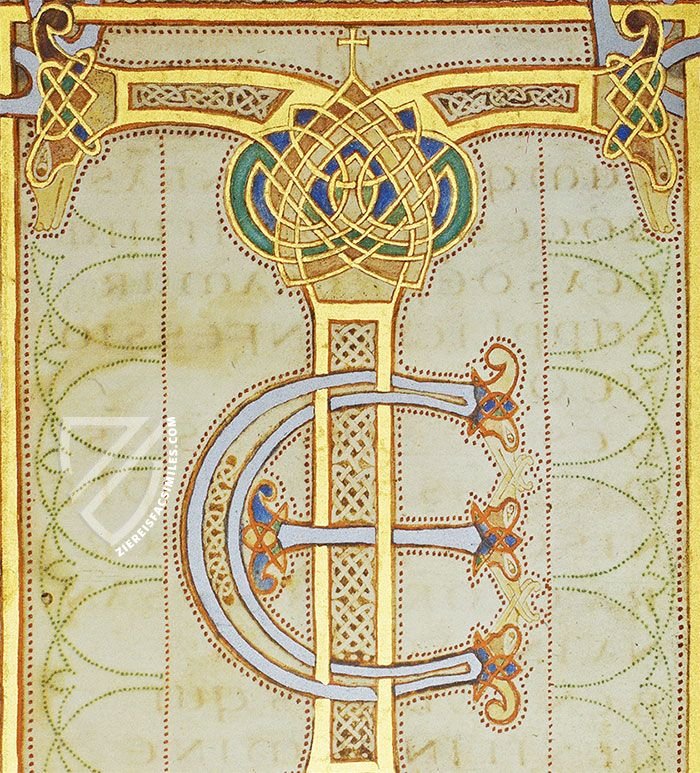 This spectacular fragment is a testament to the masterpiece that the original manuscript must have been because the surviving text pages with the Canon of the Mass are all written in gold ink and presented in beautiful frames. The text is written in an unbroken sequence of majuscule letters and was obviously executed by a masterful hand.

This fine, Frankish-style uncial text is surrounded by a frame of silver and gold leaf that is strongly Insular in form and has four bird heads biting into it. The particular form of the interlace patterns are reminiscent of ornamental motifs in Anglo-Saxon jewelry, which was highly coveted. Notes found in the margins are also written so neatly that they could have been part of the original manuscript. 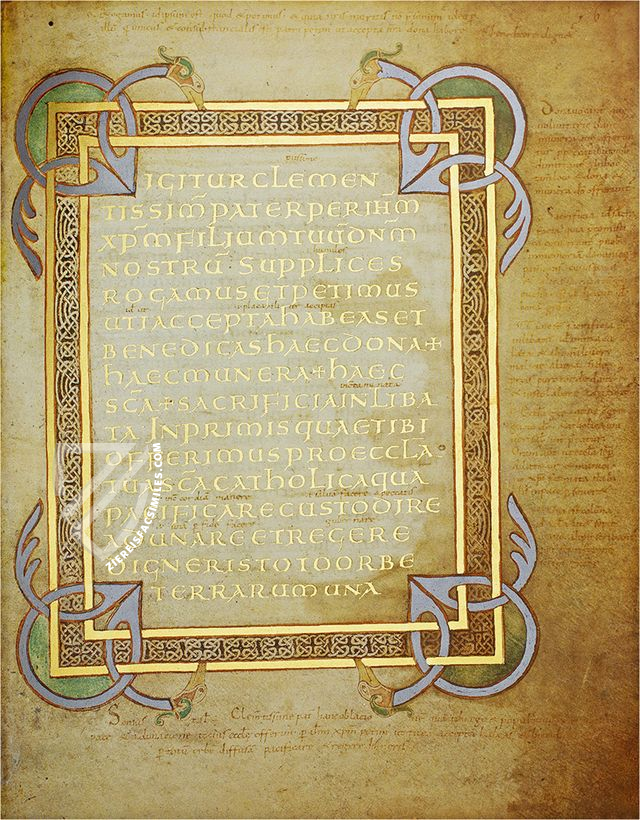 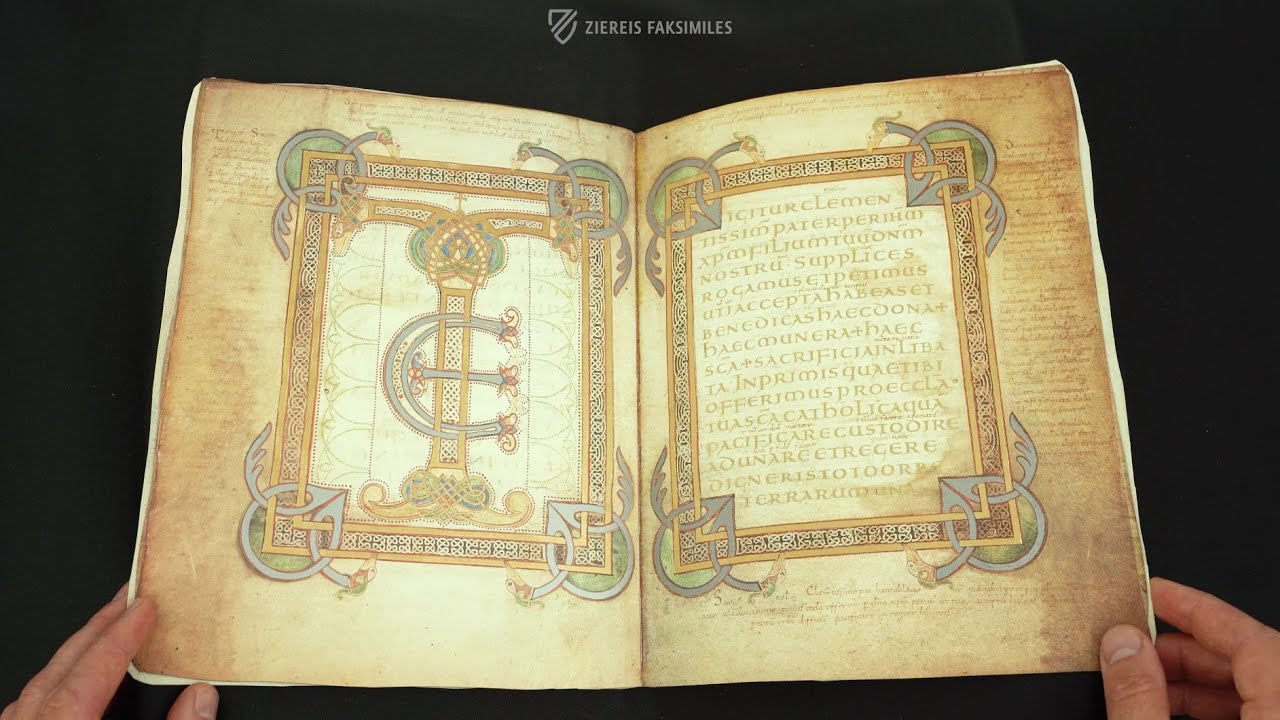 The scholarly commentary was written by Franz Unterkircher and contains a general introduction as well as a description of the codicological analysis and scripts used for the text. It further describes the decorative apparatus and the contents of the manuscript. The commentary volume is complete with a list of selected literature.
1 volume: Exact reproduction of the original document (extent, color and size) Reproduction of the entire original document as detailed as possible (scope, format, colors). The binding may not correspond to the original or current document binding. All pages are cut according to the original.
Price Category: € (under 1,000€)
Edition available
Price: Log in here!
Order / Ask a Question
You might also be interested in: 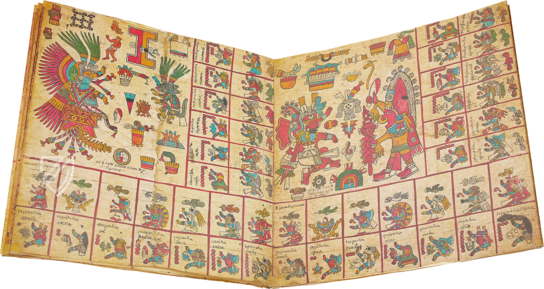 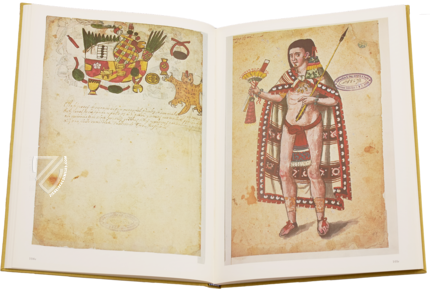 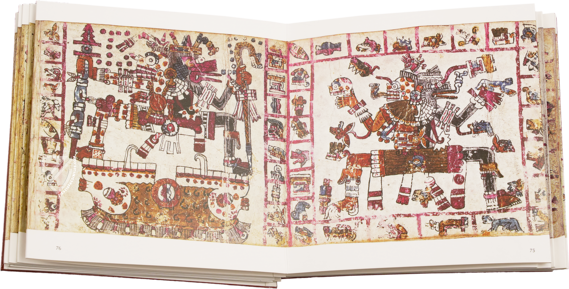 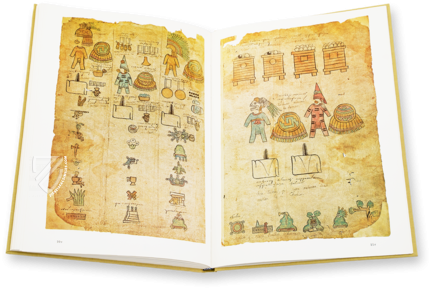