The Codex Amiatinus is the oldest surviving version of the Bible to contain the complete Vulgate text as written by St. Jerome, originating from Anglo-Saxon England ca. 700. It is also the oldest single-volume Bible to survive to the present. Originally sent to Rome as a gift to the Pope, the manuscript spent most of its life in the library of the Abbey of the Savior on Mount Amiata, Tuscany, which is the origin of its name. It represents the most reliable transcription of St. Jerome’s magnum opus, making it invaluable to theologians and art historians alike.

In the late-4th century, St. Jerome (347-420) completed an authoritative Latin Translation of the Bible at the behest of Pope Damasus I (ca. 305–384), which is known as the Vulgate. It gradually came to replace an earlier Latin translation by the 13th century and was reaffirmed by the Council of Trent (1545–63) as the official Latin Bible, even though there was not an authoritative edition at the time. The so-called “Clementine edition” became the standard in 1592 and remained so until the promulgation of the Nova Vulgata in 1979. The provenance of the manuscript at hand, the Codex Amiatinus, has long been debated with scholars claiming it originated in places as far apart as northern England and Southern Italy. It is named after Mount Amiata in Tuscany, where it was long stored in the Abbazia di San Salvatore Abbey. What is uncontested is the fact that this is the oldest surviving complete manuscript of the Vulgate version of the Bible as well as the oldest single-volume Bible. Only the incomplete 7th century León Palimpsest is older. Furthermore, it represents the most reliable transcription of St. Jerome’s magnum opus, making it invaluable to theologians and art historians alike. This massive tome measures 54 x 33.5 cm, contains over 1,000 leaves, and weighs 50 kilograms!

Determining the origins of the Codex Amiatinus has been complicated by the fact that the dedication page has been altered. Angelo Maria Bandini (1726–1803), principal librarian of Florence’s famous Laurentian Library, theorized that Servandus, a follower of St. Benedict (ca. 480 – ca. 547), was responsible for the manuscript and that it was created ca. 540 in Montecassino Abbey, a center of art and culture. Accepted for the next hundred years, this hypothesis was eventually disproven by German scholars, who first noticed similarities to texts from the 9th century. Finally, Giovanni Battista de Rossi (1822–94), an Italian archeologist, determined in 1888 that this manuscript was one of three copies of the Bible commissioned in 692 by Abbot Ceolfrid (ca. 642–716), who was then in charge of Monkwearmouth–Jarrow Abbey, a double Benedictine monastery in the Anglo-Saxon Kingdom of Northumbria. One of the reasons for this confusion is that the two full-page miniatures in the manuscript do not exhibit the typical aesthetic of Insular Illumination, but are clearly modeled on examples from Late Antiquity, a style popular in the scriptorium of Montecassino. The fact of this unusual artistic program makes the manuscript all the more unique.

The three commissions of the Abbot Ceolfrid were so vast in size that the abbey had to acquire additional lands to raise the 2,000 head of cattle required to produce the necessary amount of vellum. Originating from ca. 700, the Codex Amiatinus can certainly be regarded as the oldest Vulgate Bible and the oldest surviving single-volume Latin Bible. Ceolfrid intended to personally present the manuscript to Pope Gregory II, but he died en route on September 29th, 716 while in Burgundy. The manuscript found itself in the library of the Abbey of the Savior on Mount Amiata, Tuscany beginning in the 9th century, where it remained until 1786, when it became part of the holdings of the Laurentian Library in Florence. During this time, in 1586 to be precise, Pope Sixtus V (1521–90) had the manuscript sent to Rome to be consulted by scholars for a new, authoritative Latin translation, but it actually appears to have been used very little for the creation of the new Vulgata Sixtina. The Codex Amiatinus did play a critical role in subsequent attempts to correct the accumulated mistakes of the Vulgate, first by the eventual Bishop of Salisbury John Wordsworth (1843–1911) and again in 1907 by a team of Benedictine monks commissioned by Pope Pius X (1835–1914) with creating a critical new edition of St. Jerome’s Vulgate. After 1,302 years, the manuscript finally returned to England in 2017 for an exhibition of Anglo-Saxon manuscripts in the British library. Such is the life of one of the oldest and most important biblical manuscripts in the world.

La Meta Editore – Florence, 2003
Publisher: La Meta Editore – Florence, 2003
Limited Edition: 199 copies
Binding: Hand bound in leather
Commentary: The facsimile edition was published without an accompanying commentary volume.
1 volume: This facsimile is not complete. Reproduction of the entire original document as detailed as possible (format, colors). The pages are presented on a larger white background and are reduced in size. The binding may not correspond to the original or current document binding. The folios were bound in the order in which they appeared most of the time, that is, before the re-binding of the manuscript in 1784.
Price Category: €€€€€ (over 10,000€)
Edition available
Price: Log in here!
Order / Ask a Question
You might also be interested in: 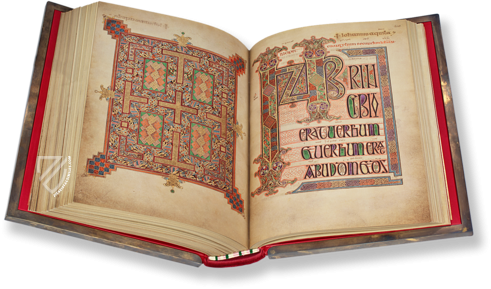 Book art for eternity adorned with glowing carpet pages: the birth of Insular illumination and a style-defining masterpiece for centuries