The Codex Benedictus originates from around 1075 and came from the Benedictine abbey at Montecassino in Italy. It was commissioned by the famous Abbot Desiderius, who had the work made for the honor of the abbey’s founder, St Benedict. The life of St. Benedict and the daily routine of the abbey are thematized in 66 colored miniatures with gold inlay.

Around the year 529, St. Benedict founded the Montecassino Abbey in Italy. Under the direction of Abbot Desiderius from 1058 to 1085, the monastery became one of the important cultural centers of Europe. The monastic scriptorium of Montecassino produced some of the most significant Romanesque manuscripts. A treasure from this scriptorium is the Codex Benedictus, which was created in memory of the monastery’s founding father. His life and works were recorded here in prayers, hymns, and illustrations. The codex was read from on church feasts and holidays during monastic services. The manuscript contains 66 large and small miniatures in fresh colors and gold elements.

A New Understanding of Spirituality

The Codex Benedictus originates from around 1075 and was commissioned by Abbot Desiderius. Different illuminators illustrated the book, in the middle of which stood the life of Saint Benedict. The codex also contains the stories of St. Maurus and St. Scholastica, the sister of St. Benedict. Its illustrations include references to alterations in monastic life: the clergy won increasing political power and influence during the epoch of Abbot Desiderius. The relationship between clerical and worldly power changed, the question of church hierarchy returned to the foreground. These current events distinctly influenced the illuminators of the Codex Benedictus. Themes that were addressed included chastity, financial income, and the connection to powerful worldly people.

The manuscript opens with an image scene, in which Abbot Desiderius presents the codex to St. Benedict. The Montecassino Abbey is depicted in the background in shining radiance. The possessions of the monastery sprawl into a landscape at the feet of both people. This pompous opening scene is followed by numerous additional vivid miniatures. The luminously colored depictions were made by several illuminators, an illustrator adorned the colorful picture with high-carat gold. Various heteromorphic miniatures are to be found in the work, sometimes scenes stretch across an entire page, sometimes several smaller miniatures are arranged next to one another. Important events from the life of St. Benedict and his abbey were emphasized in a wide variety of different ways. Large, golden miniatures ennoble the beautiful manuscript. 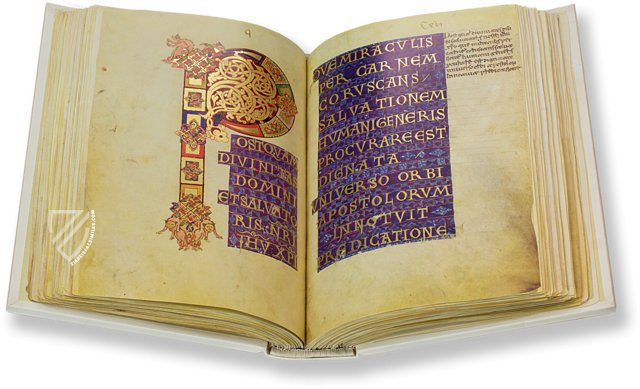 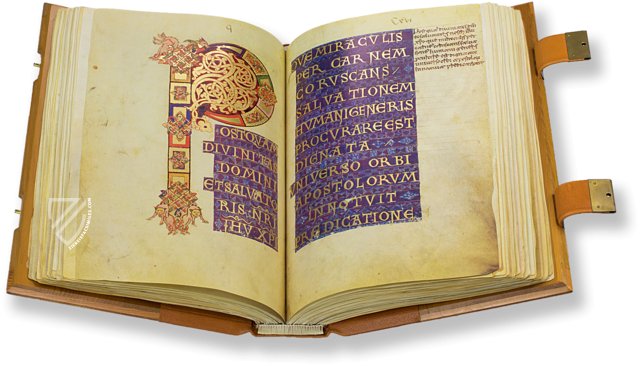 Casting out the Devil

Aside from being the most influential figure of Christian monasticism during the Early Middle Ages, one of the miracles associated with Saint Benedict was when he performed an exorcism on a priest who was possessed by the devil. As a result, the Saint Benedict Medal has an abbreviation on its reverse side which stands for VADE RETRO SATANA or "Begone, Satan!" The exorcism is depicted quite literally with Saint Benedict appearing to slap the devil out of the mouth of the afflicted priest. 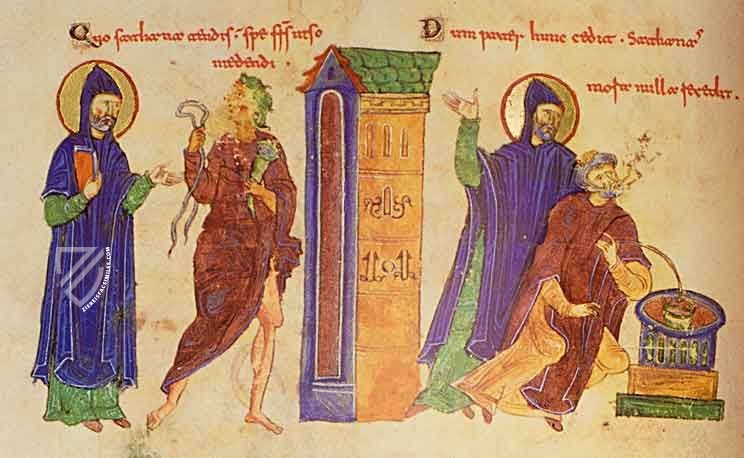 The opening scene of this Romanesque manuscript shows an archetypal “presentation miniature” in which Abbot Desiderius presents the codex at hand to St. Benedict. The square halo of Desiderius indicates that he is alive while Benedict’s round halo indicates that he is receiving the gift posthumously. The color palette of red, blue, green, and gold is typical of luxury Romanesque manuscripts.

Montecassino Abbey is depicted shining in the background of the image, its possessions sprawling out into the landscape at the feet of the two figures. Arches and a patterned floor indicate that the scene is occurring in an interior space within this grandiose architecture, innovatively depicting events inside while simultaneously representing the setting outside. 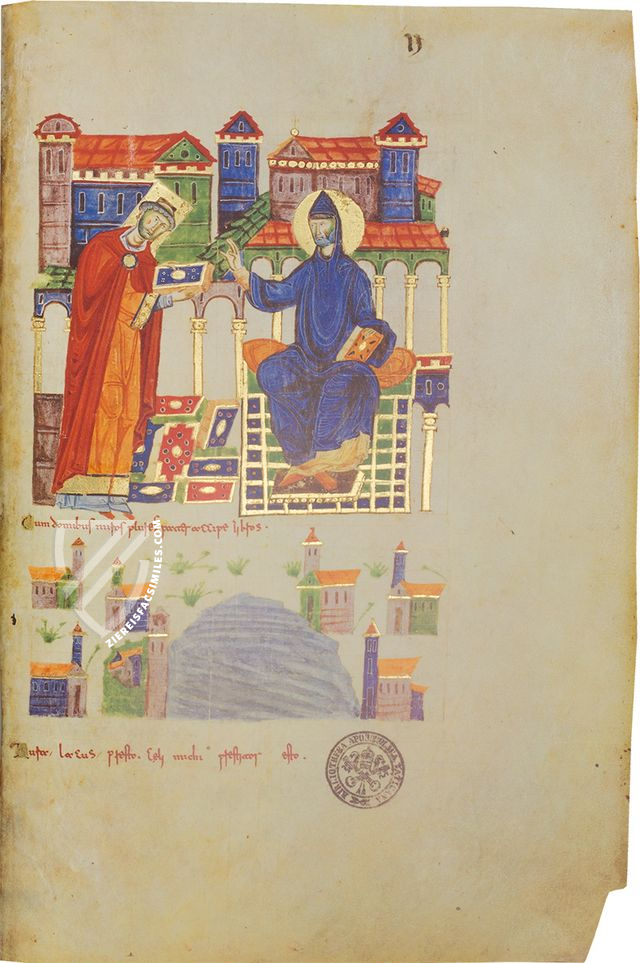 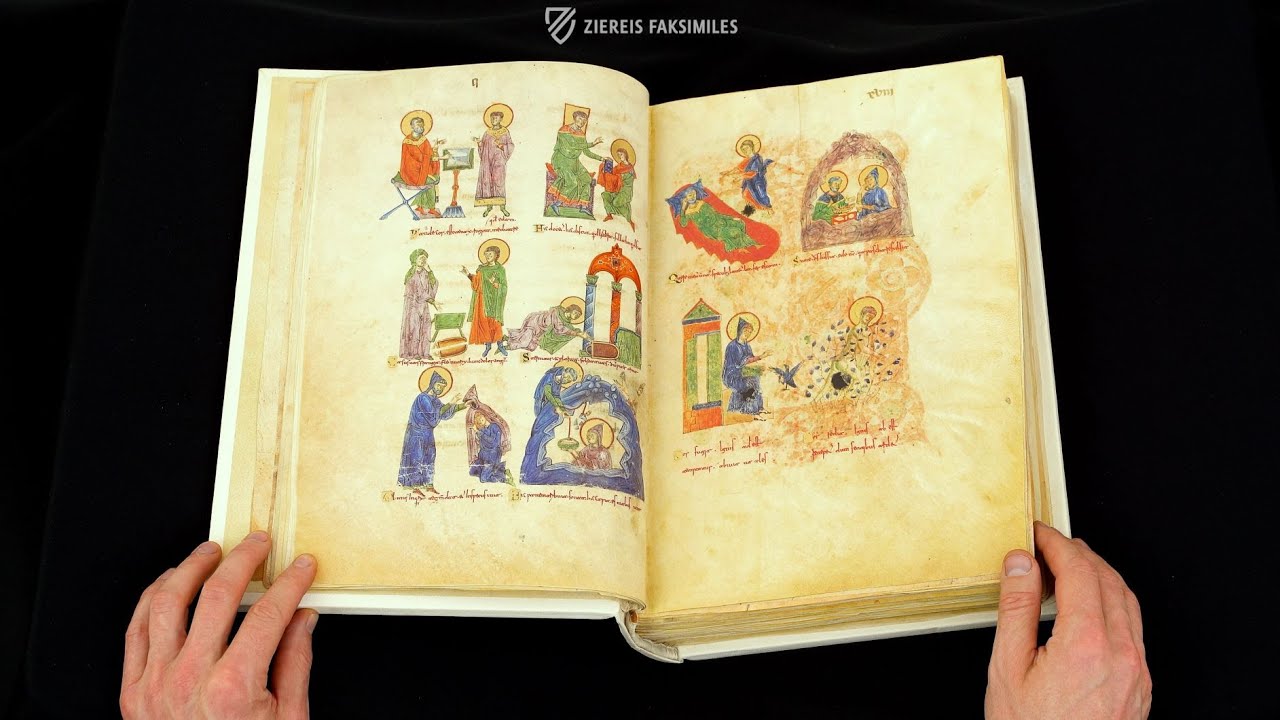 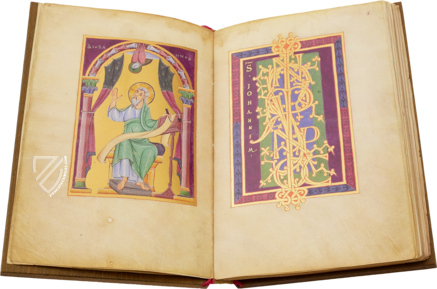