For various reasons, Codex Egerton 2895 occupies a special place among the manuscripts of the Mixtecs, a group of the indigenous population of Mexican. In terms of its format and content, as well as in terms of the iconography chosen, it clearly derives from the indigenous tradition before the Spanish Conquista of Mexico. Furthermore, the illustrations are explained in the Mixtec language – a great stroke of luck for research! Its peculiarity, however, is mainly due to the fact that this codex has been provided with accompanying inscriptions in Latin script, as well as some European influences in the art. As a result, it became possible to determine many places and names for the first time. A long genealogy, which is based on the lineage of the mothers, is another special feature in this exceptional codex. It is thus an example of the unification of the indigenous Mexican and European traditions.

Stored in the British Museum since 1911 under the shelf mark Egerton 2895, this manuscript from conquest-era Mexico consists primarily of a history and genealogy. It consists of 16 double-sided leaves measuring 27. x 21.5 cm each and 4.42 meters in total when unfolded. This illuminated Mixtec manuscript also exhibits from elements of Aztec art and some later additions were made during the 17th and 18th centuries. It is colorfully illustrated, although the paint has deteriorated on some pages and one appears to have been deliberately defaced, probably by a prudish cleric. Nevertheless, the manuscript is counted among the most important written witnesses to the history and culture of Pre-Columbian Mexico.

This work covers 26 generations of a Mixtec noble family between the years 970 and 1490 and includes some subsidiary genealogies. The founding members of this dynasty appear to be Lord One Alligator Tlaloc and his wife One Alligator Sun. Their male descendants are depicted wearing masks and crowns while the women are generally depicted in a kneeling position. However, it is through the lineage of the women and not of the men that the family history is traced, so it would be presumptive of to interpret this as a submissive position. The town of Cuquila Santa Maria in Tlaxiaco is also illustrated in the manuscript, which appears to have been the work of several hands working over a period of years in the region of Mixteca Baja.

Testimonary to a Clash of Cultures

The unique position that the Codex Egerton has amongst the genre of Mixtecan manuscripts lies in its verifiable date of origin. During the first half of the 16th century as the Conquistadors were conquering the Central American regions in the name of the Spanish throne, there was a clash of two advanced cultures, and it is out of this time period that the Codex Egerton emerges. Within the codex two vastly different traditions, indigenous American and European, find themselves merging together to form a new, unique culture. The content is predominantly indigenous in nature and deals with local traditions. There is a strong European influence in the style of the pictures visible through the use of enlarged figures arranged in an unstructured way and which represent a significant departure from the normally formal concentration found in pre-Columbian manuscripts.

Purchased with the Endowment of Francis Egerton

Details of the origins of the manuscript are not known beyond that the original document appears to predate the arrival of the Spanish. After passing through various hands in Mexico for centuries, it was acquired by Felipe Sanchez Solis in 1869. He in turn sold it to Freiherr von Waecker-Gotter, a German diplomat active in Mexico between 1880 and 1888. For these reasons, the manuscript is sometimes referred to as either the Códice Sánchez Solís or the Codex Waecker Götter. It was purchased by the British Museum, its current owner, from Ida Bühle on the 13th of November 1911 with money from the Egerton Fund. The 8th and last Earl of Bridgewater, Francis Henry Egerton (1756–1829) was an intellectual, freemason, and a noted eccentric who not only dressed his dogs and cats like little lords and ladies but took them for carriage rides as well. Egerton never married and died childless, bequeathing a collection of 67 manuscripts and £12,000 – a handsome sum in those days – to the British Museum. Codex Egerton 2895 is just one of more than 3,800 manuscripts that have been purchased thanks to the generous endowment of this far-sighted and generous eccentric.

These are the first two of seven heroes carrying divine symbols who proceed from a sacred temple with a red stone head representing the Old Fire God. Similar processions can be found in other Mixtec manuscripts from the latter half of the 10th century, and they likely represent the bringing of the symbols of power to the land of the Mixtecs after the sack of Tula, the capital of the Toltec Empire. This event sets the stage for the following genealogy of twenty-six generations of a Mixtec noble family. 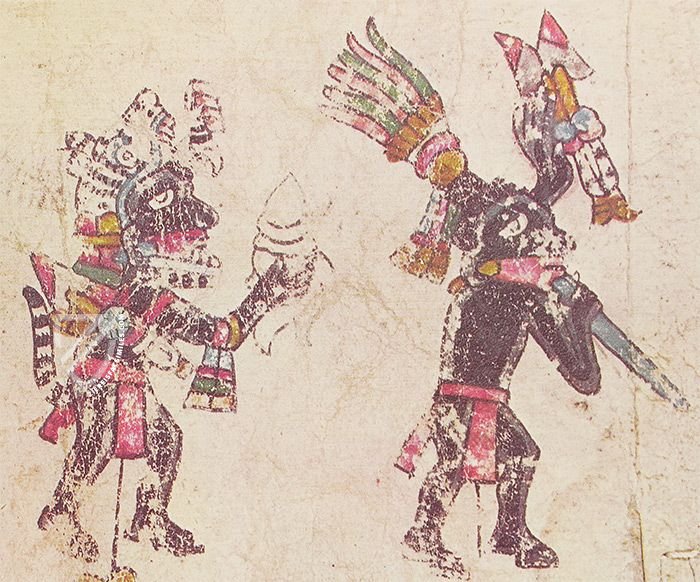 Origins of the Mixtecs

The highly symbolic opening page of the manuscript shows a mountain with an ocelot. There is a water sport on one of its paws in the center of the page and near it a brown stain appears on the year-sign of Ācatl, a reed. Above the ocelot, a small human figure in a frame edged by sacrificial knives leaps upwards where a sun eagle is perched.

This image has a great deal of philosophical significance, and it expresses the same concept as the more famous Aztec symbol of an eagle sitting on a cactus with a snake in its beak: it is the legend of a national beginning. The three dates on the right symbolize the years Ācatl, Calli, and Tecpatl, each with the numeral 13 and a day sign, the last of which corresponds to ca. 960 in the Gregorian calendar. 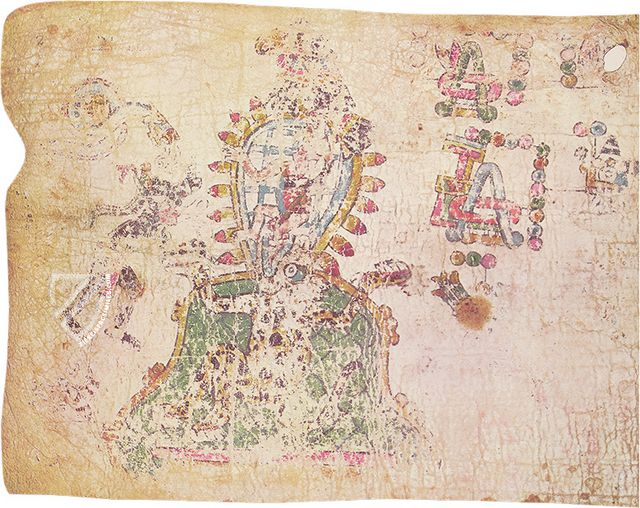 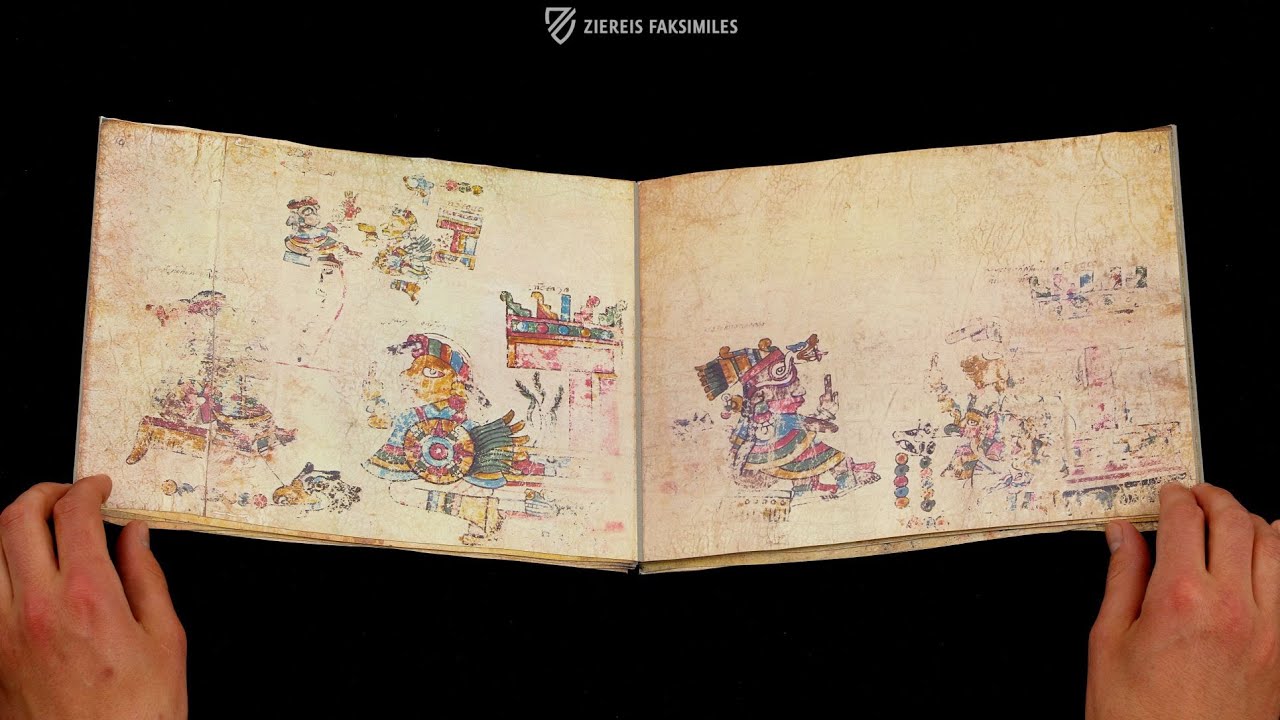 Publisher: Akademische Druck- u. Verlagsanstalt (ADEVA) – Graz, 1965
Binding: Folding book in half leather case with commentary
Commentary: 1 volume (30 pages) by Cottie A. Burland
Language: German
1 volume: Exact reproduction of the original document (extent, color and size) Reproduction of the entire original document as detailed as possible (scope, format, colors). The binding may not correspond to the original or current document binding.
Price Category: € (under 1,000€)
Edition available
Price: Log in here!
Order / Ask a Question
You might also be interested in: