The saying "good things often come in small packages" rings true in the world of illuminated manuscripts. There are huge tomes for ceremonial uses in church, impressive to be sure, but small books of hours, designed to be carried on one's person all day, are in many respects even more remarkable because of the added challenge presented by the limited space. The Codex Rotundus takes this a step further: it is almost perfectly round in shape in addition to being only 9 cm in diameter. The Latin/French text, miniatures, historiated initials, and other embellishments are all designed to accommodate and even take advantage of this unique book form. A true unicum of medieval book production!

Medieval and early modern book culture has produced outstanding and extraordinary manuscripts time and time again: luxury bindings, illustrations generously endowed with gold and silver, written on magenta colored parchment. However, good things often come in small packages, and so is the case with this manuscript: it fascinates not only due to its small size, but moreover because of its form. The Codex Rotundus is a 266 page book of hours in Latin and French. The manuscript is unique in form and size: the pages are approximately circular in shape and measure a little over 9 cm in diameter. The feat of book binding here is enormous: since the layers are bound together on a mere 3 cm book spine, the body of the book is be held together by 3 clasps. The original clasps were re-used when the book was rebound in the 17th century; each clasp is an artful monogram shaped in the form of different gothic alphabetic letters.

Patronized by the Duke of Cleves?

Evidence for whom this opulent and entertaining book was originally intended can be found in initial “D” in folio 24r, which introduces the Divine Office to the Holy Cross: the first text after the French calendar. This initial “D” contains a coat of arms in its interior, which the next owner of the book had apparently attempted to erase. However, one can still make out small pieces of reddish Cleves carbuncle and golden flecks from the chequered balk of the County of Mark, as well as a blue heart-shaped shield. Therefore, it can only be assumed that the first owner of this manuscript was most likely also its patron: Adolph of Cleves.

Adolph of Cleves and the Dukes of Burgundy

Adolph of Cleves, Lord of Ravenstein and Winnendahl (1425–1492), was from a noble family with the strongest of ties to the court of the dukes of Burgundy. He was the nephew of Phillip the Good, Duke of Burgundy (1396–1467) and having been raised in this court, he participated in all the great campaigns of his uncle’s reign. Charles the Bold (1433–77), son and successor of Phillip the Good, later named Adolph Viceroy of Arras and finally appointed him to Governor General of the Netherlands in 1475. The connection between Adolph and the Burgundian court would be yet further strengthened through his marriage with Anna of Burgundy (1435–1508), one of the illegitimate daughters of Philip the Good and governess to Mary of Burgundy (1457–1482), granddaughter of Phillip the Good. Mary herself became so fond of Adolph that she chose him as godfather of her first-born child, Philip I, in 1478. After Mary's death, Adolph of Cleves was appointed Regency Council for their son by her husband **Emperor Maximilian I (1459-1519).

A Display of Wealth and Taste

When one considers all these royal ties strongly influencing Adolph, it becomes clear not only why he chose to have his book of hours made in the Bruges workshop, but also his desire to possess such an extravagant and extraordinary book. While at the Burgundian court, he had come in contact with the most highly developed book culture, whose innovation was admired by all. References to Adolph are also found in the monogrammed clasps which fasten the book. The unusually stylized letters cannot be read clearly to this day. However, the same decorative letters adorn some borders of another book of hours owned by Adolph in Baltimore (Walters Art Gallery, W 439). In folio 13v/14r of this book one finds the fully preserved painting of the coat of arms from Adolph of Cleves, removing any doubt as to the identity of the coat of arms in the Codex Rotundus.

The Flemish School with an Individual Character

Not only are the individual pages in a round format but so are the text and three full-page miniatures. These unique features, as well as the 30 historiated initials come from one of the most highly regarded original book painters who has gone down in art history following the Hildsheim manuscript as the “Painter of the Codex Rotundus”. Stylistic parallels tie the painter of the Codex Rotundus to yet another great Bruges book painter, the “Master of the Dresden Prayer Book” whom we know our painter worked with on at least one occasion. More than likely, the painter of the Rotundus had also worked for some time in the Bruges workshop of the Dresden Master and was therefore inspired by many different stylistic perspectives. 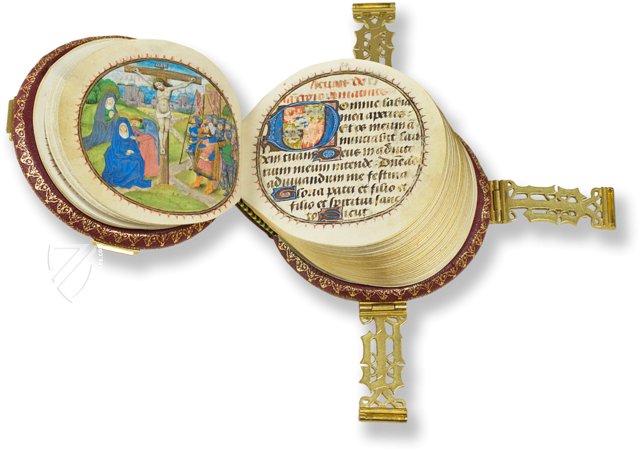 Massacre of the Innocents

Despite its small size, this historiated “C” initial contains an artful depiction of King Herod’s infamous order and shows him and his soldiers dressed in the arms and armor of the 15th century: “Then Herod, when he saw that he was deceived by the wise men, was exceedingly angry; and he sent forth and put to death all the male children who were in Bethlehem and in all its districts, from two years old and under, according to the time which he had determined from the wise men.” (Matt. 2:16).

The sophistication and detail of this round miniature is all the more impressive when one considers that it has a diameter of only 9.3 cm. Although the master responsible is unknown, the image bears all the hallmarks of fine Gothic Illumination: elegant, elongated, figures, a wide variety of bright colors, a dream landscape, and embellishment with gold pen strokes to emphasize the halos and clothing of the righteous.

Jerusalem is depicted with French Gothic architecture in the background. Christ, pale and on the verge of death, looks down at his grieving mother, who is comforted by one of the Twelve Apostles, Peter perhaps, as Mary Magdalene looks on. Roman soldiers dressed as 15th century mercenaries look on, as does a well-dressed Pharisee. 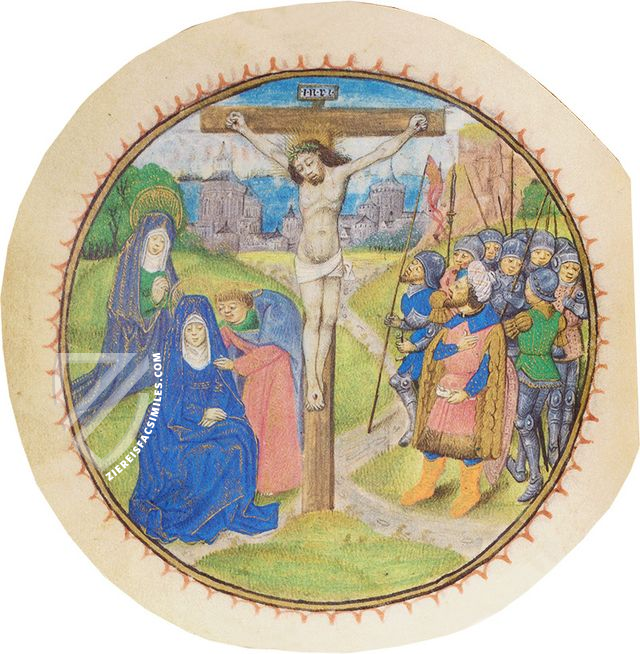 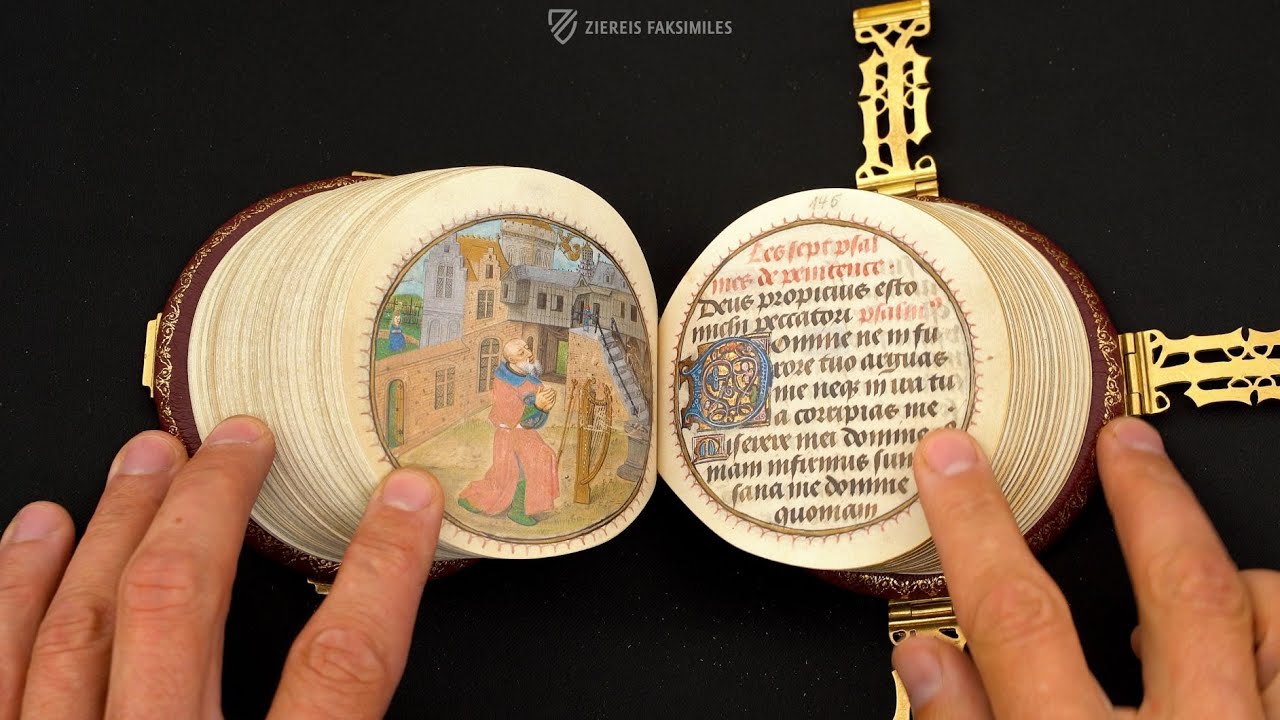 Publisher: Akademische Druck- u. Verlagsanstalt (ADEVA) – Graz, 2011
Limited Edition: 480 copies
Binding: Handmade full leather binding of reddish brown leather with gold embossing. The three clasps of the original are faithfully reproduced to the smallest detail. They are formed as a monogram of gothic letters artfully inserted into each other. Case with acrylic cover.
Commentary: 1 volume by Bodo Brinkmann
Language: German
1 volume: Exact reproduction of the original document (extent, color and size) Reproduction of the entire original document as detailed as possible (scope, format, colors). The binding may not correspond to the original or current document binding.
Price Category: €€ (1,000€ - 3,000€)
Edition available
Price: Login here!
Order / Ask a Question
You might also be interested in: 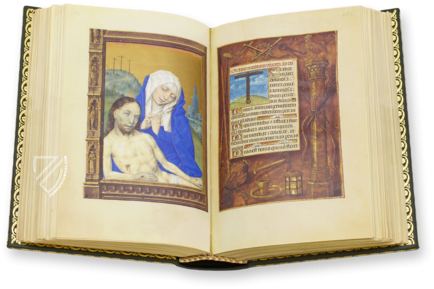 Designed by Simon Marmion, the Maximilian Master, and a number of other first-class illuminators: a richly decorated masterpiece of Flemish illumination with extraordinary miniatures and bordure ornamentation 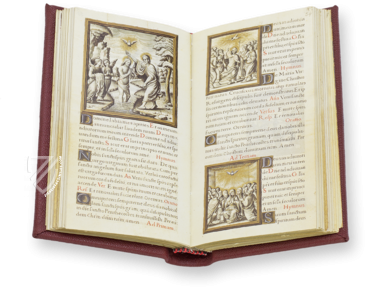