Charlemagne, the greatest monarch of medieval Europe, grandfather of the European Union, was a Frankish warlord who so greatly valued knowledge that he planted the seeds of the Renaissance with the numerous monasteries, scriptoria, and schools he established. He was also a human being with human appetites and as such had many children both legitimate and not. One of his illegitimate sons still became one of the greatest art patrons of the 9th century. Bishop Drogo. In addition to having his Cathedral in Metz embellished, he commissioned a number of manuscripts, the most outstanding of which is the Drogo Sacramentary. This manuscript is unique for many reasons ranging from its origins outside of a monastic scriptorium to the unusual and innovate nature of its figural depictions. The initials of the manuscript are absolutely fantastic and, like much of the text, are were created using luminous gold ink. All of this is part of a remarkably holistic and refined manuscript that reflects the sophistication of its patron.

Among the treasures of the Bibliothèque Nationale is a manuscript constituting one of the finest monuments of Carolingian illumination. It is a Sacramentary written and painted for Bishop Drogo’s personal use (823–855) and it has become a true monument to his name. Drogo, the illegitimate son of Charlemagne, was one of the greatest patrons of the arts in the 9th century. His fame as a great lover of the arts is not least based on the fact that he embellished his cathedral in Metz with the most sumptuous works which, in terms of beauty and preciousness, rank among the highlights of Carolingian art. Among them are three manuscripts, of which the Drogo Sacramentary is the latest and also most mature and most accomplished example.

One of the Most Perfect Carolinian Manuscripts

The Drogo Sacramentary is of a very personal character and was obviously produced outside a monastic scriptorium, unlike many other manuscripts made for export or for practical use in a religious institution. On the contrary, this work of art clearly is the production of a court school. The sacramentary reflects the individual, highly educated character of its patron, who hired artists and scribes to satisfy his own artistic ambitions. The manuscript was the result of teamwork between no more than two or three artists who united ornament, figurative portrayals and diverse types of script in a holistic composition, which still impresses us today with its uniquely beautiful and clear grading of the text.

The ornamental decoration of the sacramentary boasts richly embellished initials in correlation with the text. When simply decorated, they consist of golden foliage and rinceaux winding around the body of the letter. The larger letters and sumptuous initial pages, however, are in direct reference to the contents of the text they precede. They depict incidents in the lives of Christ and the saints and are elaborately ornate with classical forms, such as vines, architectural elements and playing Eroses. In close relation with these initials are the ivory reliefs on the binding, which protect the original manuscript and are reproduced in the commentary volume of the facsimile edition. They repeat some of the scenes shown in the miniatures, including the same architecture and some persons in the same posture, wearing the same clothing.

An Important Work of Iconography

Of particular importance for the history of illumination and especially for iconography is the Easter Sunday initial depicting the Crucifixion (fol. 43v). This is the earliest example of a Crucifixion with a number of accompanying figures in Carolingian illumination. For the first time ever, two allegorical figures, representing the New and the Old Testaments, appear under the Cross. What strikes us here is that the Jewish religion is not depicted in a derogatory manner, as is often subsequently the case. On the contrary, the old man representing the Jewish religion relates positively to the scene, indicating the fulfilment of the Prophet’s word and his triumph over death, while Ecclesia as the allegory of the Christian Church collects the blood flowing from the wound in Christ’s side in a chalice. The chalice shown here for the first time as Ecclesia’s attribute goes back to purely Christian sources, whereas the hasta signifera, the lance with a flying banner as an ensign which Ecclesia holds in her left hand, goes back to antiquity and is a sign of sovereignty. Likewise, the disc that the old man holds in his hand, is a symbol of power. It represents the globe in a simplified sphere symbolizing the universe, which had been the attribute for world domination since the time of the Roman emperors.

The liturgical text is written with great care in two types of script. The minuscule script used in the running text is complete with golden capitals, capitalis rustica, and uncials in all text divisions, thus not only highlighting single passages but also grading the importance of the text. The main portion of the Sacramentary, or Canon Missale (fol. 14r–21r), is enhanced with special ornament of extraordinary richness, with countless golden initials, figurative portrayals, and elaborate frames, the text written throughout in glowing golden letters.

The Sacramentary was not only destined for general use on all days of the Church year but also for the bishop’s personal use. It thus only contains those feast days on which the bishop himself celebrated Mass, as were prayers for the sacraments and solemnities recited by the bishop. 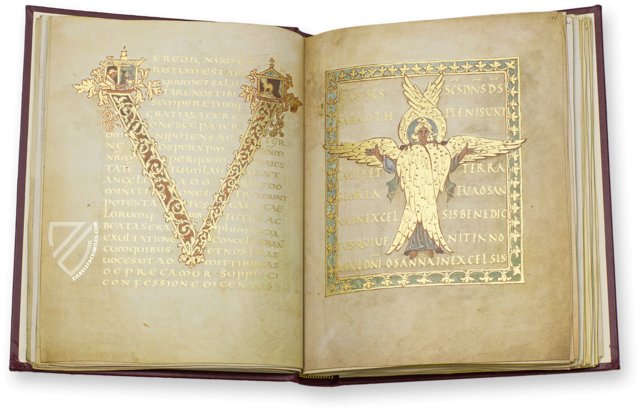 This green-gold “E” initial is an exemplary specimen of Carolingian art with tendril swirls and small medallion portraits embedded into the letter itself. Writing diligently at his desk, John is shown working on his Gospel as the Holy Spirit, represented by a white dove, fills him with divine inspiration. His symbol – an eagle with a halo – is perched on the middle “branch” of the historiated initial. The elegantly written text in gold ink further attests to the quality of this manuscript. 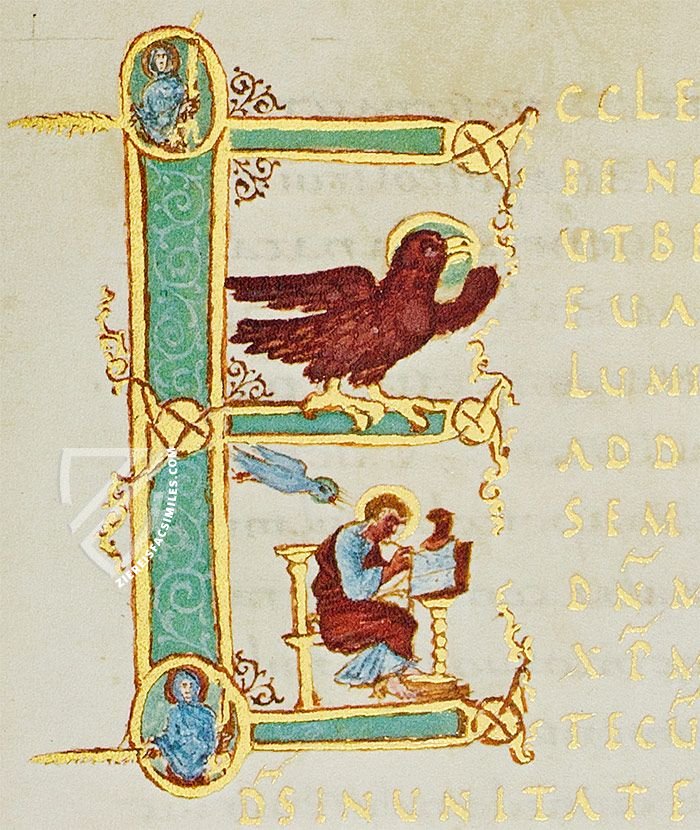 Incipit Page: Canon of the Mass

This Carolingian manuscript is famous for its initials, a wonderful sampling of which is given on the present incipit page. It spells out the first word of the mass, CLEMENTISSME or “merciful”, in large, intricate initials worthy of its patron, a powerful bishop and illegitimate son of Charlemagne. The page nearly blinds the beholder due to the lavish application of gold leaf.

The letters are painted in either green or red, which were already expensive paints in their own right. However, one hardly notices these colors because of the primacy of gold leaf on the page. Although incorporating some Insular interlace patterns, the vines winding themselves around the letters are clearly in the style of the rinceaux found in Roman friezes. 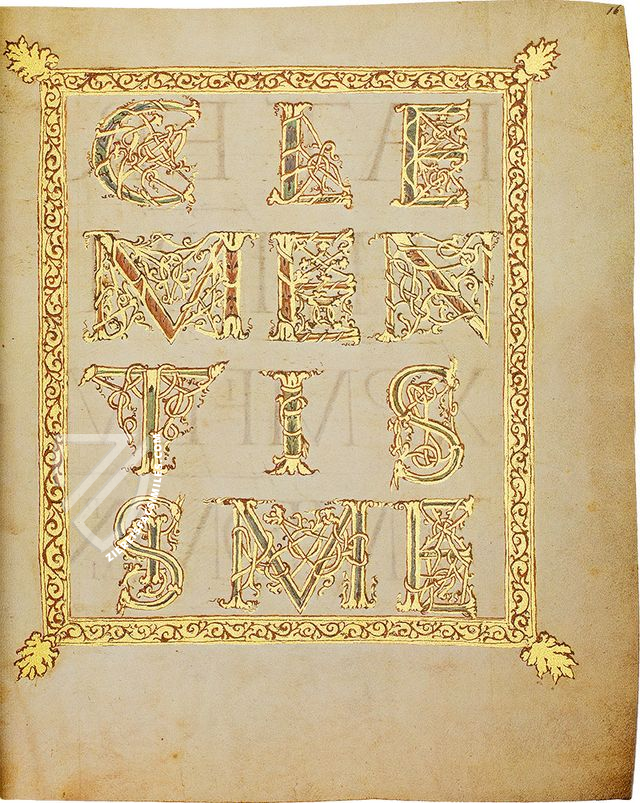 The commentary written by Wilhelm Koehler contains a general introduction and an insight into the history and making of the Sacramentary. It gives a short explanation of the compilation, decoration, and contents of the manuscript, and provides an overview of the secondary literature. Available in German or in French.
1 volume: Exact reproduction of the original document (extent, color and size) Reproduction of the entire original document as detailed as possible (scope, format, colors). The binding may not correspond to the original or current document binding.
Price Category: €€ (1,000€ - 3,000€)
Edition available
Price: Log in here!
Order / Ask a Question
You might also be interested in: 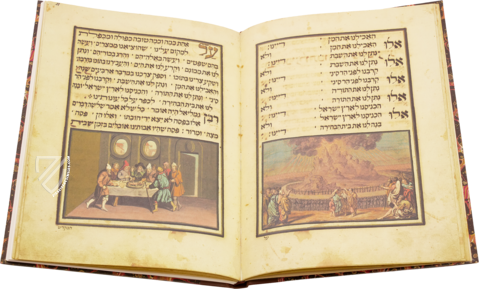 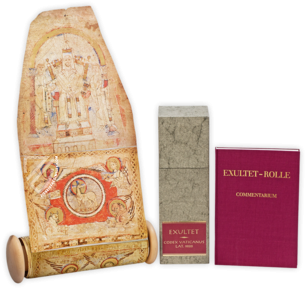