Matthias Corvinus (23 February 1443 – 6 April 1490) was King of Hungary and Croatia and was one of the most powerful rulers of his age. Having been educated in Italy, he was determined to bring the magnificence of the Renaissance to his realm. His library, the Bibliotheca Corviniana, was second only to the Vatican library with respect to the size of its collection until it was destroyed by invading Turkish armies in 1526. Among the few hundred manuscripts to have survived the destruction, the Roma Instaurata is one of the most significant. It is a systematic and documented guide to the ruins and topography of ancient Rome created by Flavio Biondo (Flavius Blondus), considered to be one of the first archeologists, in the years 1440 to 1463.

Depictions of Ancient Rome from the greatest collection of secular books in Renaissance Europe, the Bibliotheca Corviniana. This historic document represents one of the few surviving specimens of the famous library, which was destroyed by the Ottoman Turks in the aftermath of the Battle of Mohács in 1526.

A Great King and Patron of the Arts

The library of King Matthias Corvinus (1443–1490), the Bibliotheca Corviniana, was Europe’s greatest Renaissance collection of secular books: historical chronicles, philosophic and scientific works in the fifteenth century. Matthias Corvinus was King of Hungary and Croatia and was one of the most powerful rulers of his age. He was educated in Italy and his fascination with the achievements of the Italian Renaissance led to the promotion of Italian cultural influences in Hungary. The famous Bibliotheca Corviniana was one of the most renowned libraries of the Renaissance world. Matthias started to collect books from about 1460. At the king’s death, the library consisted of about 3,000 codices or Corvinae which included many works by classical Greek and Latin authors. It represented the literary production of the Renaissance, reflecting the state of knowledge and the arts including philosophy, theology, history, law, literature, geography, natural sciences, medicine, architecture, etc. The Bibliotheca Corviniana was second in size only to the Vatican Library. In 1489, Bartolomeo della Fonte of Florence wrote that Lorenzo de’ Medici founded his own Greek-Latin library encouraged by the example of the Hungarian king. The Turkish invasion of Hungary in the 16th century destroyed most of the codices. Only about 650 Corvinae survived, distributed among several libraries in Hungary and Europe. Items from the Bibliotheca Corviniana were added to UNESCO’s Memory of the World Register in 2005 in recognition of their historical significance.

Ruins of the Eternal City

The original of the present Corvina, entitled Roma Instaurata is an interesting work on the antique ruins of Rome. The author, Flavio Biondo (Flavius Blondus) was an Italian Renaissance humanist and historian who is known to be one of the first archeologists. Flavio published three encyclopedic works: Roma Instaurata (1440–63), Roma Triumphans (1456–60) and Italia Instaurata (1456–60). They are systematic and documented guides to the ruins and topography of ancient Rome; subsequent antiquaries and historians built on the foundations laid down by Flavio and by his older contemporary, Poggio Bracciolini. At the time, the ruins of ancient Rome were overgrown and unexplored. When in 1420 Bracciolini climbed the Capitol he saw only deserted fields. The Forum, buried in eroded topsoil, was grazed by cows while pigs rooted in the unweeded vegetation of the Campo Vaccino. Flavio and fellow humanists like Leone Battista Alberti began to explore and document the architecture, topography, and history of Rome, reviving a vision of Rome’s former glory in the process. Flavio’s first work was De Roma Instaurata (Rome Restored, 1444–1448), and is a reconstruction of ancient Roman topography. Roma Instaurata was and remains a highly influential humanist vision of restoring Rome to its previous heights of grandeur by recreating what Rome used to look like based on the ruins that remained. 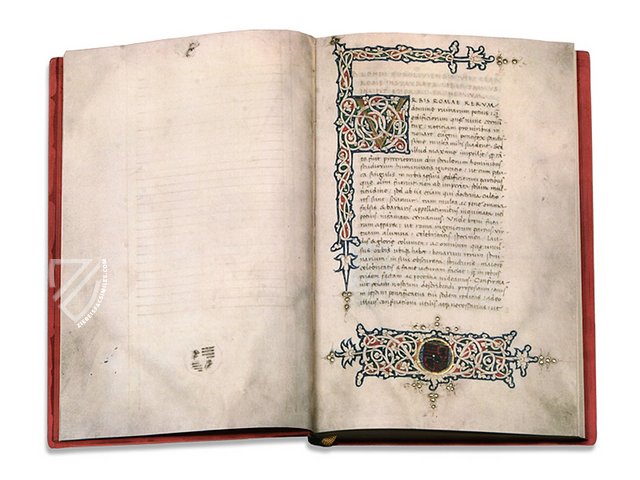 Pytheas Books – Budapest
Publisher: Pytheas Books – Budapest
Binding: Full leather with true to the original decoration on the front and back covers as well as handmade copper clasps. The pages are printed digitally and the initials on the first page are hand-gilded with real gold paint.
1 volume: Exact reproduction of the original document (extent, color and size) Reproduction of the entire original document as detailed as possible (scope, format, colors). The binding may not correspond to the original or current document binding.
Price Category: € (under 1,000€)
Edition available
Price: Login here!
Order / Ask a Question
You might also be interested in: