This dazzling visual history of the Duchy of Burgundy originates ca. 1485–90 and was intended to be a schoolbook for Philip the Fair (1478–1506). The eventual Duke of Burgundy and the first Hapsburg to become a king in Spain, was meant to learn the importance of his family with the aid of this splendid portrait of his forefathers. For better understanding, short text passages, which provided necessary explanations, were added to eleven full-page miniatures and numerous initials both large and small. The decorative and expressive illumination originated from the so-called Master of the Trivial Heads, who assisted the famous Master of Edward IV in a bustling workshop in Bruges.

One of the few illuminated children’s books originated in Belgian Bruges ca. 1485–90. The splendidly colorful pictorial history of the Duchy of Burgundy with short text passages originated as a schoolbook for the then seven-year-old Philip the Fair (1478–1506). He was supposed to be the first Hapsburg king in Spain and would rule over the Kingdoms of Castile and León. The vivid and bright pictures of the 30-page manuscript visualized the significance of his family for him at an early age. A portrait of the author of the text, who also probably Philip’s teacher, the chronicler and poet Olivier de la Marche, serves as the prelude for the eleven full-page miniatures and numerous initials both large and small.

The content of the manuscript is concerned with a time period stretching from the 1st to the 15th century. In doing so, one not only finds ostentatious portraits of legendary rulers like Stephen of Burgundy (1065–1102), but historical figures like Charlemagne, or Mary Magdalene who supposedly baptized the first King of the Burgundians. These images are accompanied by numerous vivid scenes playing out before a backdrop of imposing urban architecture and extensive riverscapes.

A Masterpiece of the Ghent-Bruges School

The wealthy trading cities of Flanders attracted many artists and miniaturists, and highly talented masters were working in Bruges and Ghent by the second half of the 15th century. The Master of the Trivial Heads was engaged as an assistant to the Master of Edward IV in a bustling workshop in Bruges, and was within the circle of this so-called Ghent-Bruges school, which dominated the art scene. He is the responsible party for the marvelously fantastic miniatures of the Flemish Chronicle of Philip the Fair.

An Ornate Chronicle for Hard Times

Such luminous depictions hardly give one the impression that the dukes of Burgundy were already in a period of decline during the time of their making, and longed to return to the years of splendor they had depicted in manifold ways. Only a century after their ducal dynasty was created, it suddenly came to an end with the death of Charles the Bold in the year 1477. 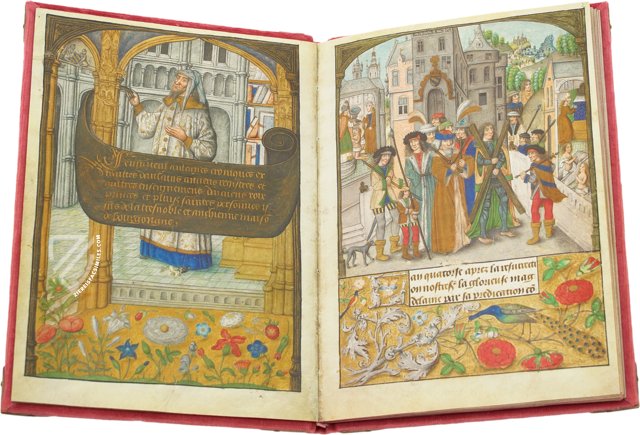 Wearing a feathered cap, long ermine-lined cloak, and knee-high boots, Maximilian I gives a knight’s sword to his young son, Philip, who is standing next to his mother, Mary of Burgundy, daughter and heir of Charles the Bold. Both Maximilian and Mary have their own beautifully dressed entourages. A small lion sitting in front of a green couch watches from the background where there are windows looking out onto a pleasant cityscape and a corridor leading to an unseen part of the interior. 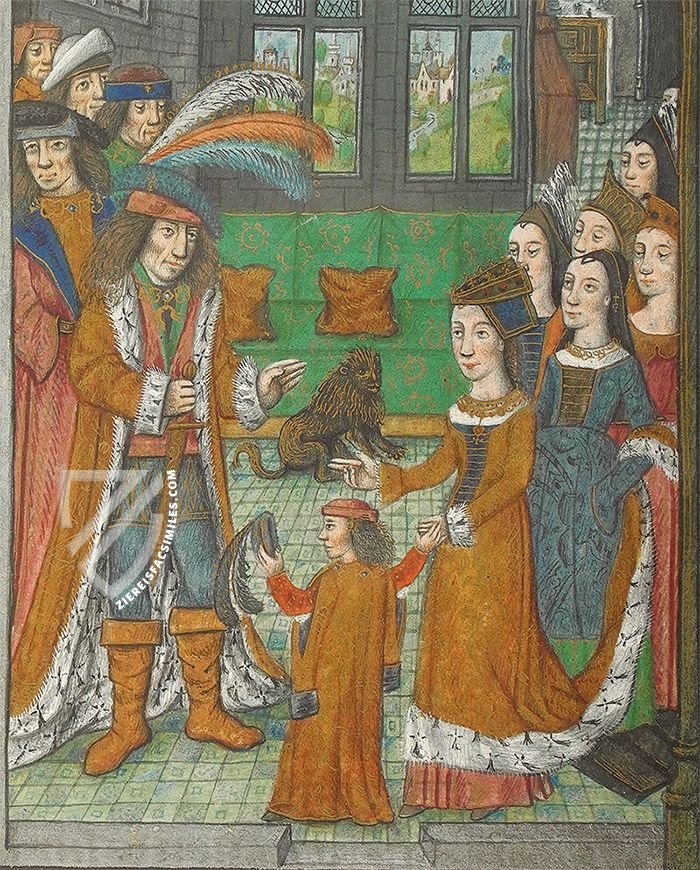 Charles the Bold and his Court

Charles the Bold dreamed of transforming the duchy of Burgundy into a kingdom and pursued an aggressive foreign policy to unite his lands into a continuous territorial unit. He thus triggered the Burgundian Wars, which resulted in his death at the Battle of Nancy and the subsequent division of his realm between France and the Hapsburg Empire.

The court of the dukes of Burgundy was arguably the grandest and most sophisticated in late medieval Europe with a manuscript culture that was second to none. This miniature page shows the richly dressed Burgundian nobility with Charles enthroned and holding a scepter. Two musicians are shown at the bottom of the page playing for the court while magnificent warhorses are shown in the street outside. 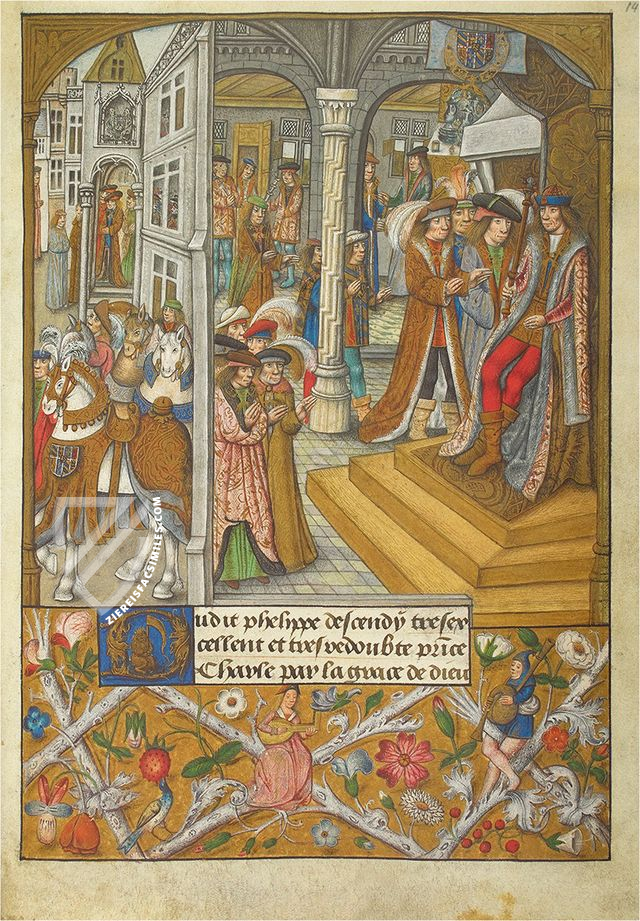 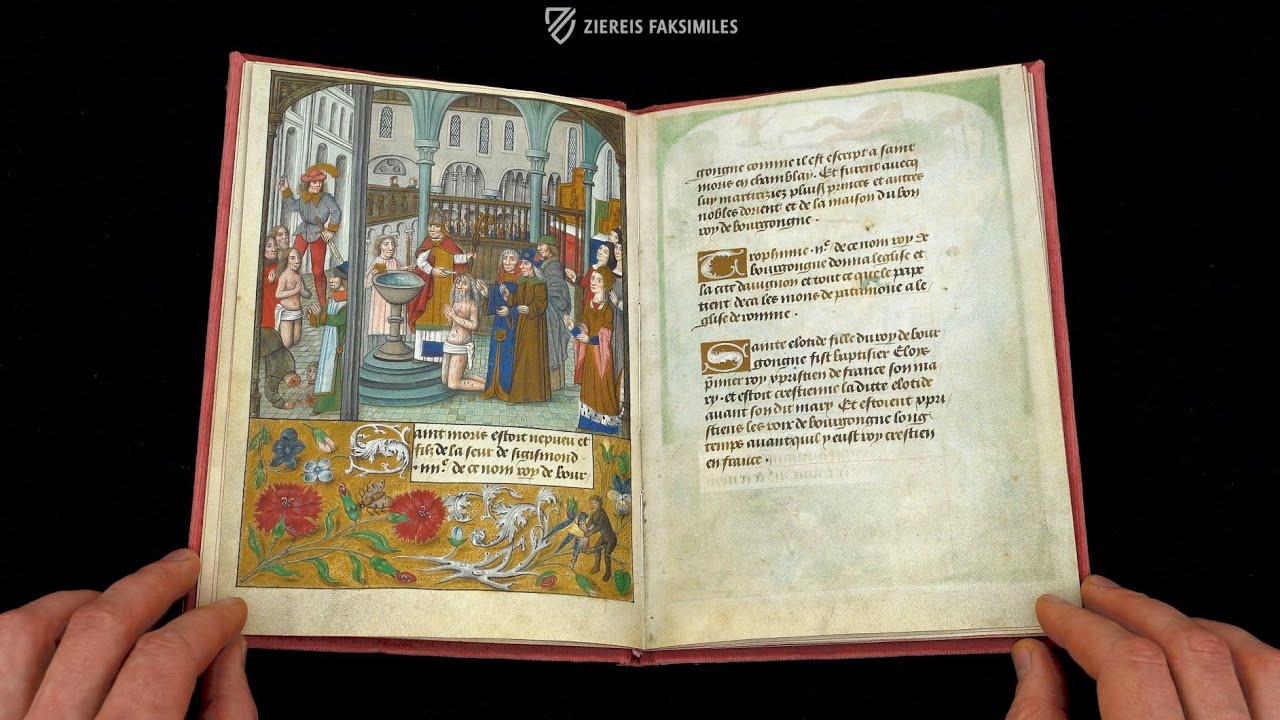 Publisher: Quaternio Verlag Luzern – Lucerne, 2015
Limited Edition: 680 copies
Binding: Bound in dark pink velvet with eight cornerpieces of filigreed brass, two medallions, and three gilded labels on the spine Acrylic presentational case
Commentary: 1 volume by Joanna Fronska, Hanno Wijsman and Graeme Small
Languages: German, French, English
1 volume: Exact reproduction of the original document (extent, color and size) In addition to the large, masterful miniatures with luminous colors and burnished gold, the fact that this book is one of the few that was made specifically for a child adds to ist rarity and value.
Price Category: €€ (1,000€ - 3,000€)
Edition available
Price: Log in here!
Order / Ask a Question
You might also be interested in: 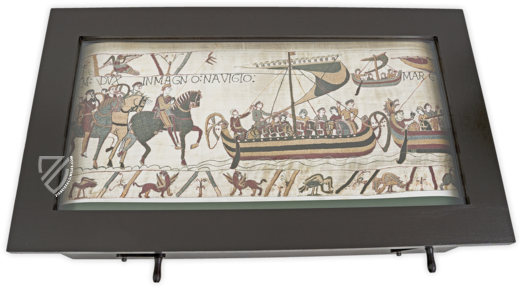