The Henry VIII Book is the most important source concerning the secular music of the English Royal House of the early 16th century. The collection originated between 1510 and 1520 and consists of 112 pieces altogether in widely varying genres of vocal and instrumental music. What is unique is that Henry VIII (1491–1547) himself is represented with 33 of his own compositions. These works to a large extent came from Robert Cooper, William Cornysh (1468–1523), and other mostly English composers.

Today, there are sadly only a few pieces of evidence providing information about the secular music of the English court in the early 16th century. Thus, the Henry VIII Bookis all the more significant, because its collection of 112 pieces in various genres is the most important source for the music at the court of the English King. With 63 compositions, the songs and ballads predominate, most of which are for three or four voices. What is additionally unique is that 33 of the pieces are attributed by name to King Henry VIII (1491–1547), whereby some more of the anonymous works might be added. Furthermore, it assembles the manuscript pieces developed by the English composers Robert Cooper and William Cornysh (1468–1523) in London between 1510 and 1520.

With its broad spectrum of vocal and instrumental music, the significant manuscript gives a stately impression of early 16th century music with Christmas songs, theatrical pieces, and a few larger works. While a majority of the texts are in English, one also encounters 15 in French and even 3 in Dutch.

Handwritten notes and text segments are decorated with enchanting initials, aside from two addenda. They immediately catch the eye of the reader and thus denote important sections with luminous blue, radiant red, and glimmering gold. In a few cases, the ornamental frames stretch to the margins and produce an expansive bordure. The design is also so artistic that it never detracts from the clear typeface of the notes, which undoubtedly stand in the foreground. 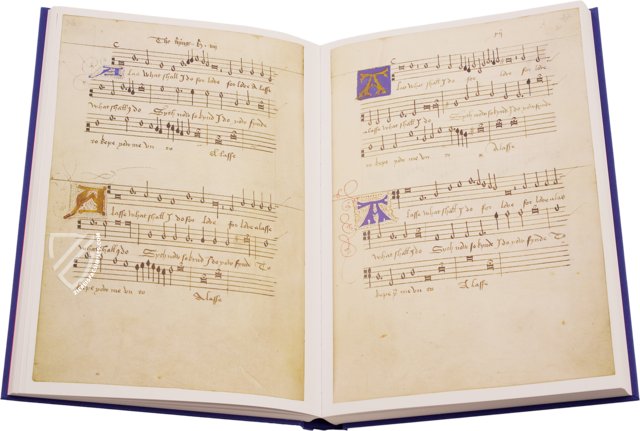 The second stanza of this French composition is preceded by a gold leaf “H” initial outlined with red ink featuring the smiling face of a man and a serrated border that resembles a modern postage stamp. Although attributed to the King, research suggests that he only composed the Contratenor. Furthermore, grammatical mistakes indicate that the composer was not a member of the Henry VIII’s francophone musical staff, but this is an important source on contemporary Parisian chansons, nonetheless. 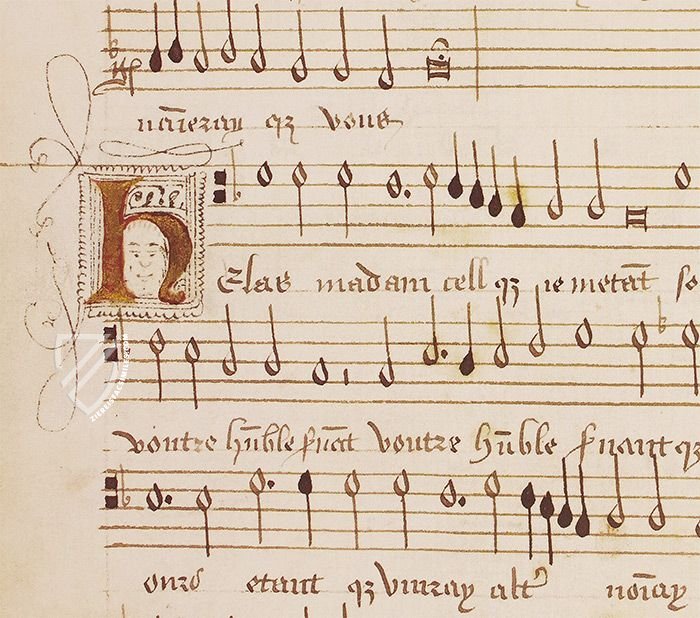 Alac alac what shall I do

Labelled “The Kyng . H . viij” at the top of the page, this English song was composed by Henry VIII himself and it seems as though some stanzas are missing. Furthermore, the copyist appears to have been somewhat confused by the content, e.g. writing “lakked” instead of “lokked”. The music is fairly irregular and works best if the first note of each phrase is treated as an upbeat.

Each of the three stanzas, which consist of two lines of text and musical notes written on 5-line staves, is preceded by a large “A” initial in gold leaf, blue ink, and red ink, respectively. Despite the scribe’s difficulty with some of the content, the lyrics are written in a clear and legible Gothic script that is unencumbered by unnecessary embellishments. 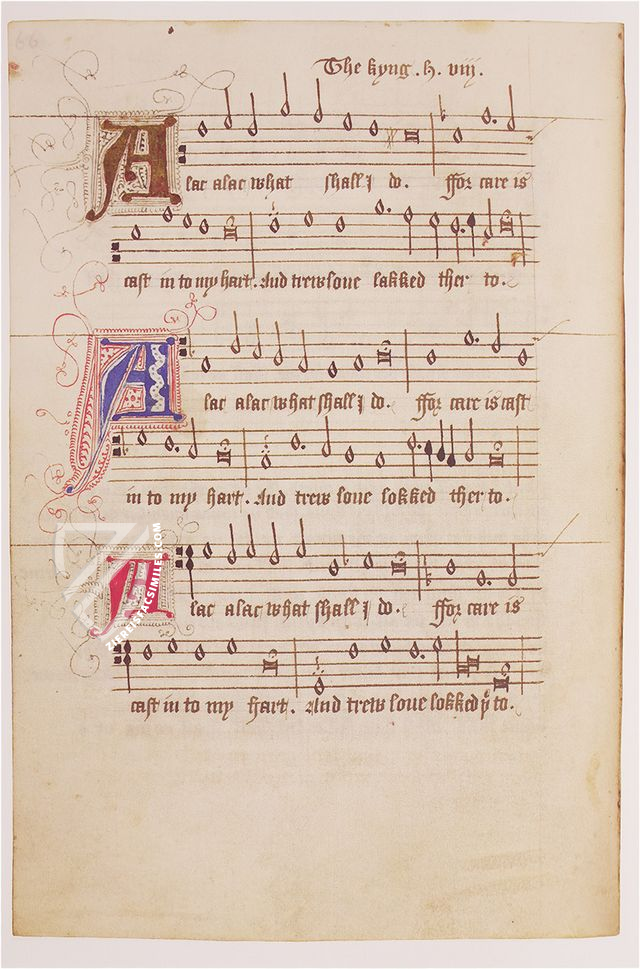 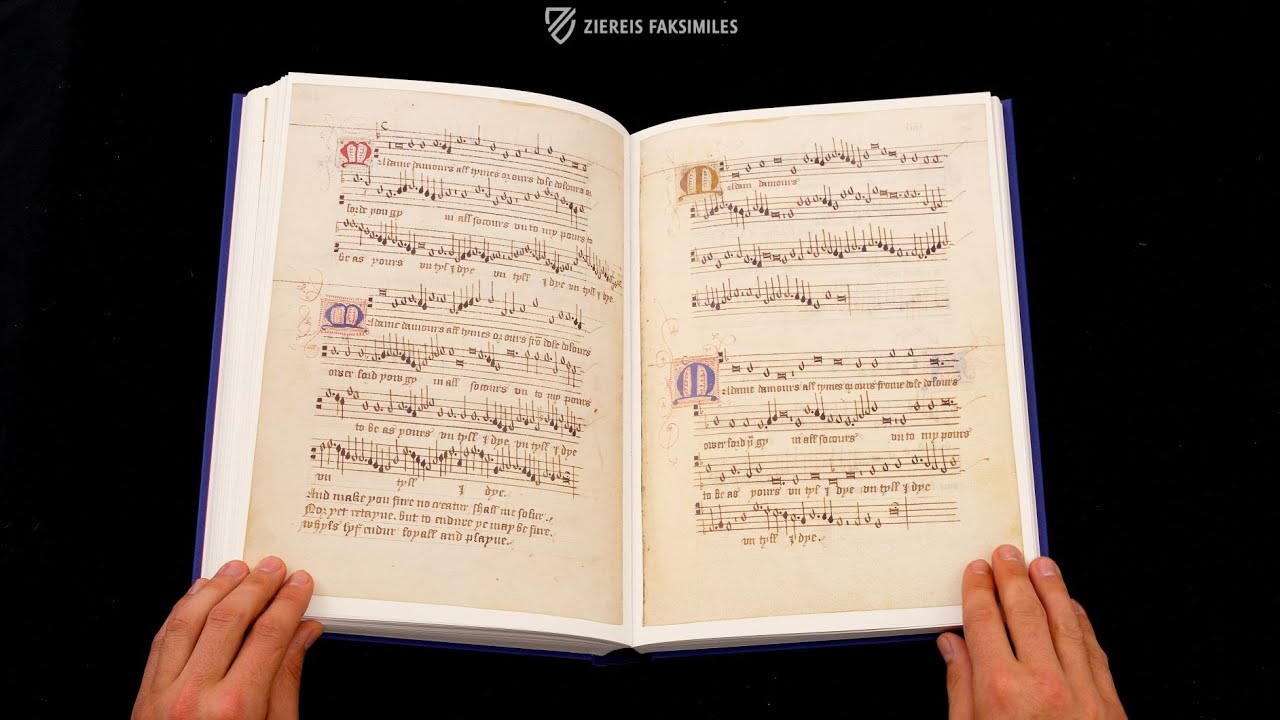 Publisher: DIAMM – London, 2014
Binding: Buckram binding
Commentary: 1 volume by David Fallows
Language: English
1 volume: Exact reproduction of the original document (extent, color and size) Reproduction of the entire original document as detailed as possible (scope, format, colors). The size of the facsimile is slightly reduced in comparison to the original manuscript (21.3 × 31.0 cm). The binding may not correspond to the original or current document binding.
Price Category: € (under 1,000€)
Edition available
Price: Log in here!
Order / Ask a Question
You might also be interested in: