The famous, comprehensive, and gorgeously designed overview work of the flora of the Hortus Eystettensis of the early 17th century: the pharmacist from Nuremberg Basilius Besler, commissioned by the Prince-Bishop of Eichstätt Konrad von Gemmingen, produced the three volumes of the comprehensive luxury edition of the Hortus Eystettensis. Over 1,000 gorgeously colored copperplate engravings present the common and exotic plants of Eichstätt’s famous botanical garden in impressive beauty and botanical accuracy.

Johann Konrad von Gemmingen (1561–1612), Prince-Bishop of Eichstätt, commissioned the installation of a botanical garden on the bastions of the Willibaldsburg castle above Eichstätt, the seat of the prince-bishops. The famous Hortus Eystettensis was laid out according to the conception and under the supervision of Joachim Camerarius and later Basilius Besler. Precious and exotic plants from both Europe as well as from other parts of the world were presented here in their magnificence and make the garden a means of representing the power of the Prince-Bishop of Eichstätt. The Hortus Eystettensis, which can still be admired today as it was originally conceived in the Willibaldsburg, was was one of the most famous gardens in Germany!

The Flora of the Hortus Eystettensis in a Luxury Volume

Basilius Besler (1561–1629), a pharmacist, botanist, and publisher from Nuremberg who was also responsible for the design of Eichstätt’s botanical garden, planned to make the Prince-Bishop’s Hortus Eystettensis available to the broader public through a publication. This splendid work finally appeared in the year 1613: three large-format volumes totaling 734 pages with 367 tables and 1,084 life-size representations of plants. Some of the tables can be unfolded upward so that one can see a plant on a single page from roots to flowers.

Gorgeous and vividly, powerfully colored, these copperplate engravings present the great variety of the Hortus Eystettensis with its medical-, ornamental-, and agricultural-plants: splendidly blooming flowers and rare medicinal plants, delicious berries, and exotic fruits. The colored depictions possess both a beauty that flatters the eye as well as botanical accuracy. It was for that purpose that Besler obtained the support of the botanist Ludwig Jungermann.

One of the few surviving first editions of the famous luxury botanical book Hortus Eystettensis can be found today in the Eichstätt University Library, where the original preliminary sketches for the grandiose copperplate engravings are also stored. This is “one of the best surviving copies of the colored first printing.” The luxury edition of the Hortus Eystettensis was a tremendous success and appeared into the 18th century in a total of five editions. The first edition – with colored copperplate etchings for good measure – is nevertheless considered to be the most magnificent! 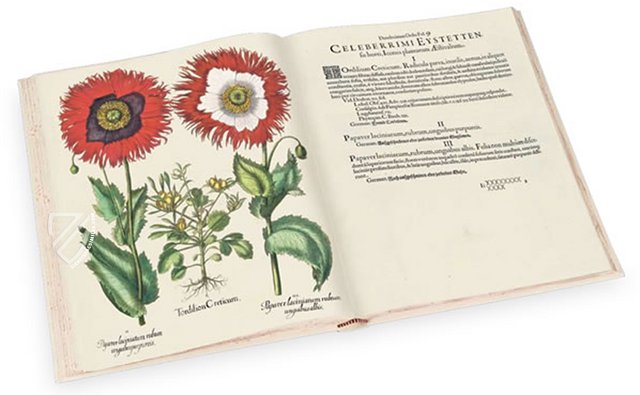 “Scape” is a botanical term for a herbaceous stem destined to bear flowers or fruit and rising from a bulb. Common examples include green onions, chives, and garlic – shown here. Although not specifically labelled as such, one can already see cloves forming, meaning that the scapes of this garlic have yet to be trimmed so that all of the plant’s energy can be devoted to the growth of the bulb. Native to Central Asia, garlic is a beloved seasoning with numerous medicinal applications.

Originating from the plateau stretching from Turkey to Pakistan, the Fritillaria imperialis is a flower in the lily family that is a popular selection for botanical gardens, such as the famous Hortus Eystettensis in Eichstätt. It is often referred to as a “crown imperial” or “Kaiser’s crown” because its flowers are bunched in a manner that resembles a crown.

The plant is grown from a bulb, which is best planted on its side to prevent the roots from rotting, and thrives in sandy, well-drained soil. Both the flower and the bulb are presented in this colored Baroque copperplate, which is artful and scientific in equal measure. Its shading is particularly admirable and shows a natural range of tones in both the leaves and pedals. 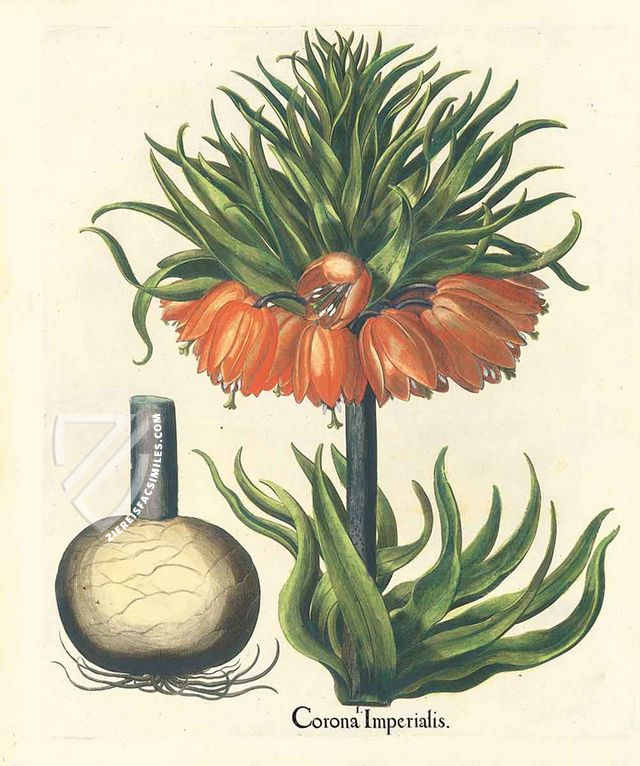 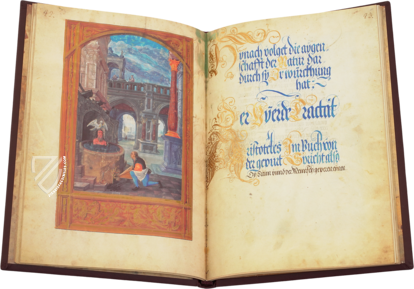