Johann Ludwig Gottfried was a German theologian, translator, and author who created one of the most widely read historical works of the early modern period. Born in Amberg, he studied theology in Heidelberg and was soon recognized by a publisher in Oppenheim for his skill with the written word. First published in 1631, his Historical Chronicle or Description of the Most Remarkable History enjoyed great popularity throughout the 17th and 18th centuries and was even studied by Goethe. An improved and expanded second edition including more recent historical events was published in 1743 and is presented here.
Gottfried’s work is distinguished not only by the quality of his chronicle, but also by his translations and his composition of epigrams, compilations, and paraphrases. 156 small portraits and 328 copperplate engravings by Matthäus Merian the Elder artfully adorn the comprehensive text with accurate cityscapes and dramatic historical scenes such as the Defenestration of Prague, sieges, battles on land and sea, assassinations, executions, and more. Some of the engravings are double pages while others, including maps, fold out.

This expansive survey of world history by Johann Ludwig Gottfried (1584-1633) was so popular that it was even used as a reference work by a young Wolfgang von Goethe (1749–1832). Work on the ambitious project was continued after his death by Johann Philipp Abelin. Both volumes of this text are printed in two columns with a Fraktur typeface that is adorned by hundreds of detailed copperplates by the master engraver Matthäus Merian the Elder (1593–1650). Gottfried’s illustrated historical chronicle is a true masterpiece in the spirit of the Enlightenment and a wonderful specimen of fine 18th century printing.

The Work of Two Great Minds

Born in Amberg, Johann Ludwig Gottfried began studying theology in Heidelberg in 1601 and was active as a Protestant deacon between 1603 and 1624 in the parishes of Gau-Odernheim, Eimsheim, Monzernheim, and Weinolsheim. He first came into contact with the publishing house of Johann Theodor de Bry (1561–1623) in Oppenheim in 1619 while working on Ovid’s Metamorphoses into Latin, which proved to be the beginning of a promising career due to his versatile language skills and education. De Bry’s son-in-law was Matthäus Merian the Elder, and thus it was through him that these two great minds came together.
The Swiss-born engraver was trained in Zürich before working and studying in Strasbourg, Nancy, and Paris, before returning to Basel in 1615. Merian moved to Oppenheim, where he met de Bry, the next year but after Oppenheim was burned by the Spanish in 1620, they eventually resettled in Frankfurt where he spent most of his career. It was in Frankfurt that Merian engraved the magnificent copperplates for Gottfried’s text between the years 1629 and 1634. The results of their collaboration are simply spectacular! 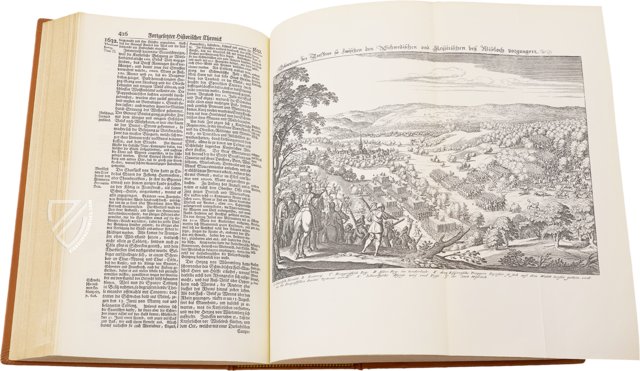 The Beheading of King Charles I

Nearly four years after he was defeated and captured by parliamentarian forces, Charles I still refused to accept a constitutional monarchy and stuck to his belief in the divine right of kings. He knew that by adhering to the principle of absolute monarchy he was signing his own death warrant, but the King was a man of conviction and was thus duly beheaded on the 30th of January 1649. This is an accurate depiction of the execution as it happened on a scaffold erected before the Banqueting House of the Palace of Whitehall. In the foreground, a woman faints and collapses to the ground on the left while a man leans against his cane and wipes tears from his eyes. 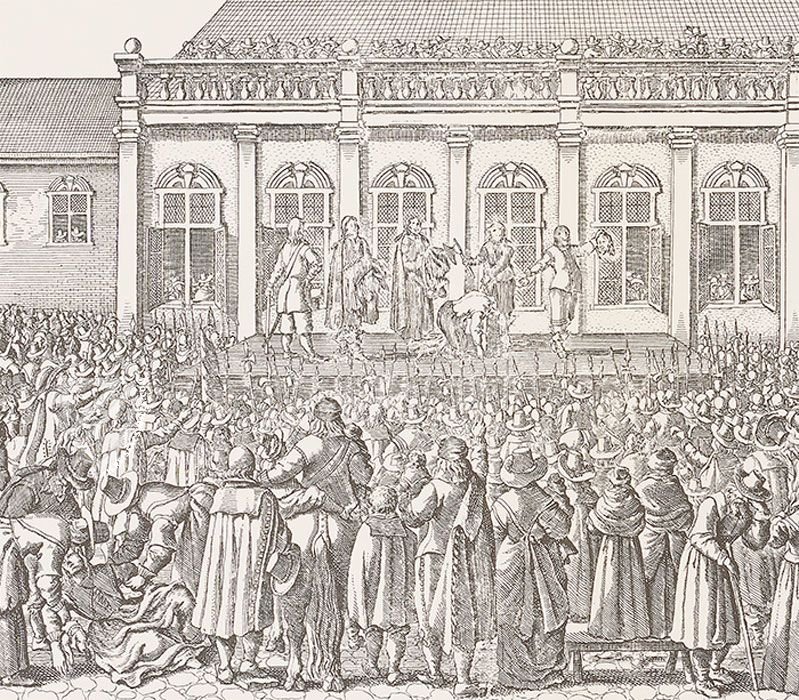 The title is held up by a crowned nude female figure labelled LVX VERITAS (light of truth), who looks directly at the beholder. On the left, a teacher in flowing robes personifying history shows a piece of paper to a child and points to the word HISTORIA and the words MAGISTRA VITAE (life’s teacher) are inscribed in the stone at their feet, where a small dog stares strangely. This phrase was used by Cicero and expresses the idea that the past should serve as a lesson for the future.

The layer of stone separating them from the grotesque figures in chains below is inscribed INSCITIA (ignorance). Men with the ears of donkey sit in the middle between figures slowly reclining into the dirt labelled OBLIVIO (oblivion) and masked figures labelled MENDACIUM (falsehood). Riding on a winged dear at the top of the page, TEMPVS (time) reigns over all as he holds an hourglass in one hand and a scythe in the other. 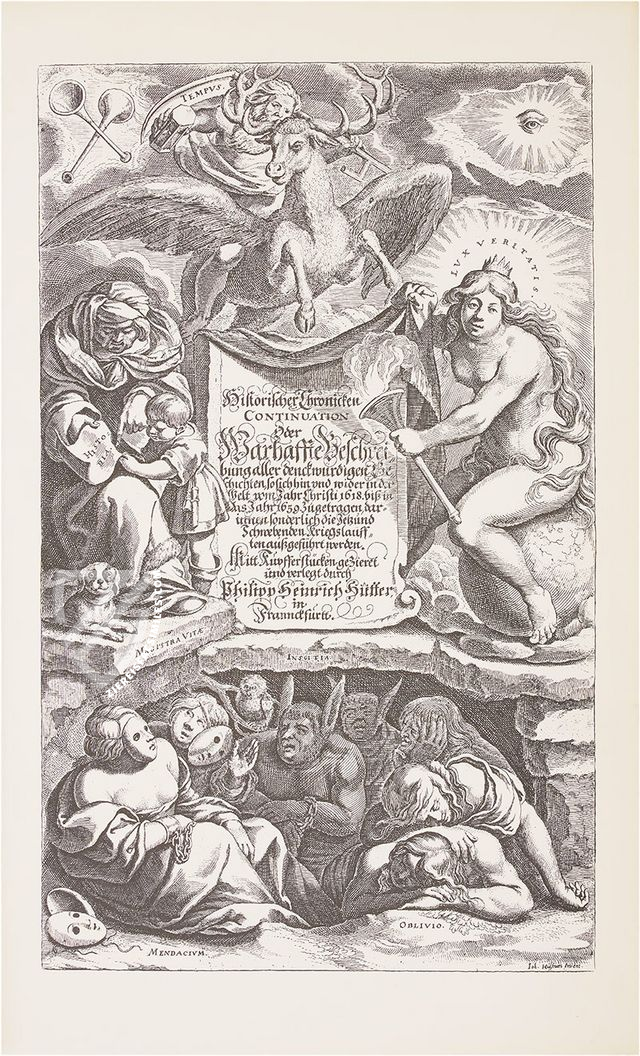 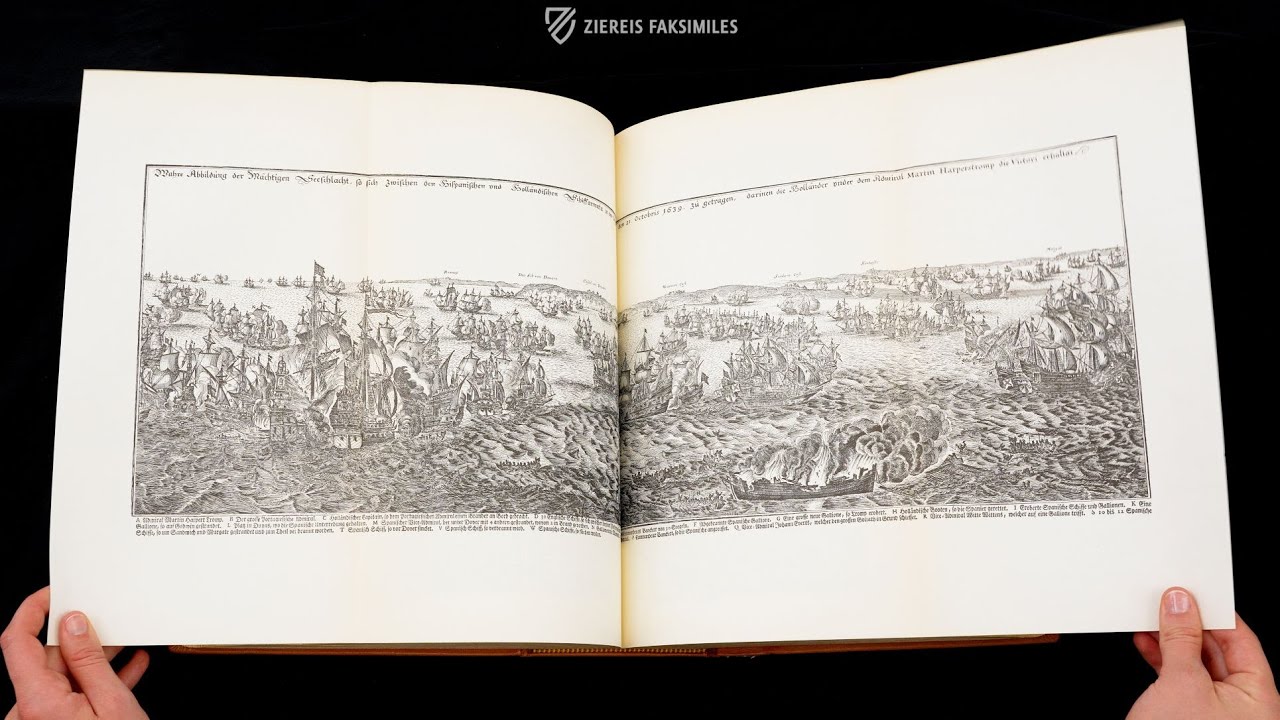 Limited Edition: 1480 copies
Binding: Leather binding
Commentary: There is no commentary volume to this edition
Reproduction of the entire original document as detailed as possible (scope, format, colors). The binding may not correspond to the original or current document binding.
Formerly1,290 €
Special Offer until 31.01.2023 (like new)399 €
Order / Ask a Question
Blog articles worth reading