The Petites Prières of Renée de France originated in France in 1517. It is one of the most beautiful and precious prayer books of the Renaissance. The manuscript distinguished itself especially through its outstanding book adornment. Floral depictions of all kinds transform the pages of the work into a true sea of flower. The history of the codex is as exciting as its decoration.

One of France’s most beautiful illuminated manuscripts originated in Paris in 1517. It is the so-called Petites Prières of Renée de France. The stunningly beautiful small book was made for the younger sister of the French Queen Claude de France. It is one of the most valuable Renaissance books of hours and besots every beholder with its lavish book adornment. The work contains 12 full-page miniatures, richly gilded miniatures. Five of these miniature depict Renée, the owner of the work, herself. All the pages of text are adorned with the most finely colored and gilded floral embellishments. 112 painted and gilded initials parse the text of the prayer book.

The Sister of the Queen

Renée de France was the youngest daughter of King Louis XII and his wife, Anne de Bretagne. While her older sister Claude became Queen of France through her marriage with Francois I, Renée became the Duchess of Ferrara as a result of her 1534 wedding with Ercole II d’Este, the son of Lucretia Borgia. She took her Petites Prières with her to the court of Ferrara, where it is supposed to have served her religious education. During the religious wars of the 16th century, Renée saved the lives of several Calvinists, and the court of Ferrara became a refuge for protestant scholars, including Clémont Marot and John Calvin. Her sympathy with Protestantism lead to a break with her husband, who had conducted the inquisition in Ferrara as part of the Counter-Reformation since 1545. Only a very few manuscripts, which were considered to be Catholic, were saved. Among these was the enchanting Petites Prières.

The Mysterious History of the Codex

The Master of Claude de France was most likely responsible for the design of the precious prayer book. This court artist already completed some codices for the young Queen Claude that are famous worldwide to this day. Due to the similarities between the miniatures of the Petites Prières and those of the Primer of Claude de France, it is assumed that both came from the same artist. As the book’s owner Renée left Ferrara and returned to France in 1560 after the death of her husband, she had to leave the prayer book in Italy for reasons that are unclear to this day. It remained in safe-keeping in the Biblioteca Estense until the first years of the 18th century. At that time the manuscript disappeared in a secretive and unclarified manner, only to reappear in 1780 under mysterious circumstances. It found itself in the Biblioteca d’Este until 1994. In this year, the work was presented in an exhibition in the Abbey of Montecassino, where it fell victim to a still unexplained art theft. The original of the Petites Prières of Renée de France remains missing to this day. This is one of five donor portraits found in the manuscript, in fact, the number of images showing Renée de France with Christ and other holy figures that attracted criticism from inquisitors, nearly resulting in the codex’s destruction. The French princess is shown kneeling before her namesake, Bishop René, who is splendidly dressed in the manner of a Renaissance prince of the church. Gold leaf sparkles everywhere from the clothing to the bench and green pillows in the background. Here we have an intimate and contemplative scene depicting the patient educational process of the Middle Ages. It depicts a room full of barefoot, would-be theologians with halos working through codices and scrolls with quills in hand. The scholars have straight noses, small, tired eyes with bags under them, and pursed lips – some double-check one another’s work.

The female figure with golden blonde hair dressed in flowing white robes is likely the manuscript’s patron, Renée de France. A checkerboard pattern on the floor in combination with the lines of the ceiling demonstrate the artist’s sense of perspective. This subdued scene is presented by a gorgeous gold leaf frame with a butterfly and beetle among the conifer tendrils. 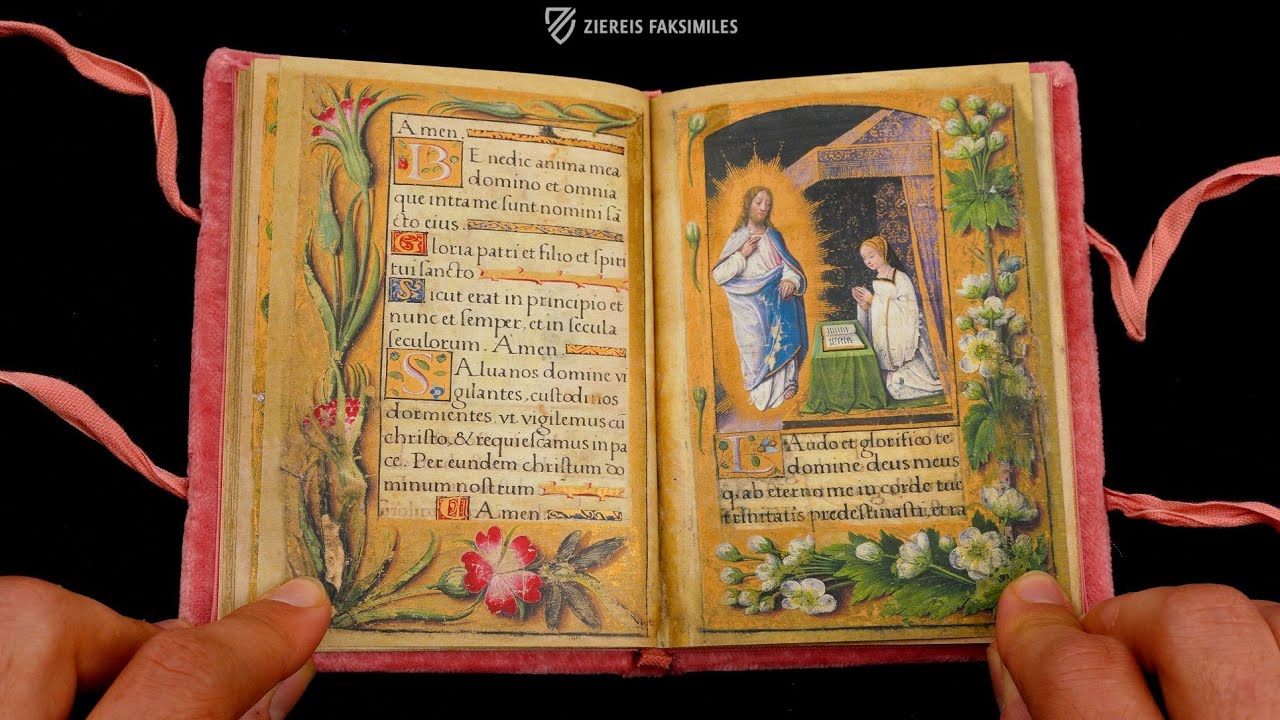 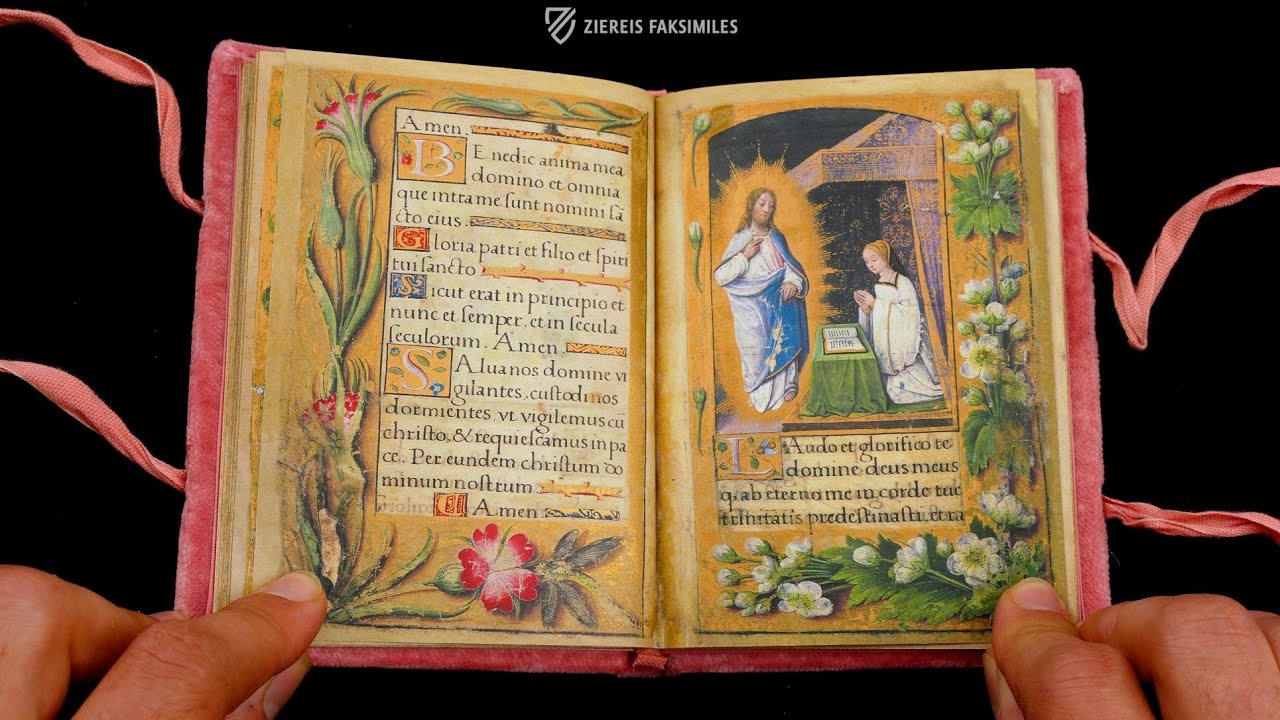