A truly fascinating jewel of 16th century illumination: the so-called Book of Hours of Mary Stuart is considered to be the smallest book of hours in the entire history of illumination. Nonetheless, the Scottish Queen’s small devotional book impresses not only because of this superlative, but is also noteworthy for its content and history: a truly royal provenance and an outstanding, precious, and masterfully artistic design!

Although the book of hours certainly bears the name of Mary Stuart, actually King François I (1497–1547) is considered to be the patron of the exceptional manuscript. It came into the possession of his wife **Claude de France as a royal present from François. The Scottish Queen Mary Stuart (1542–1587), whose tragic and exciting life fascinates to this day, eventually married the grandson of Claude de France, the French King Francois II, and it was in this way that the treasure of illumination came into her possession.

Books of hours – small, precious books for private devotion – were always small and easy to handle so that their owners could simply carry them on their person as a constant companion. This characteristic of personal prayer books was taken to the extreme here. The Book of Hours of Mary Stuart is a truly unique item: measuring only 4.8 x 3.2 cm, it is the smallest book of hours in art history!

The Shimmer of Gold

In spite of this tiny format the manuscript from the late period of illumination impresses with its outstanding design. An image overload is presented with 300 pages of miniatures and text, bordures and ornamentation, initials and gold everywhere. 14 miniature pages adorn the religious texts with appropriate pictures, scenes of the Life of Christ from birth to Passion. Nevertheless, these miniatures are not merely simple illustrations, but rather true masterpieces in the smallest of formats. Exquisitely prepared, the figurative scenes are presented in highly-detailed interior spaces or atmospheric landscapes, thus yielding a precious image of the great art of illumination during the Renaissance north of the Alps

This treasure originated from the beginning of the 16th century – ca. 1510–15 – in French Tours. The manuscript is thereby an impressive testimony to the Rouen school. After being in the hands of kings and queens for centuries, it came to Germany in 1837 via Marie d’Orleans, the daughter of the French King Louis-Philippe I, on the occasion of her marriage to Duke Alexander von Württemberg, where it is housed to this day in the collection of the House of Württemberg.

Scenes of Jesus being presented at the temple for his formal induction into Judaism were extremely popular during the Middle Ages. They show different collections of witnesses and can occur either on the steps at the entrance of the temple or at the altar. This intimate scene shows Joseph and the prophetess Hannah looking on as the Virgin Mary hands the baby Jesus over to Simeon, the high priest. All five figures have glimmering golden halos in this small masterpiece. 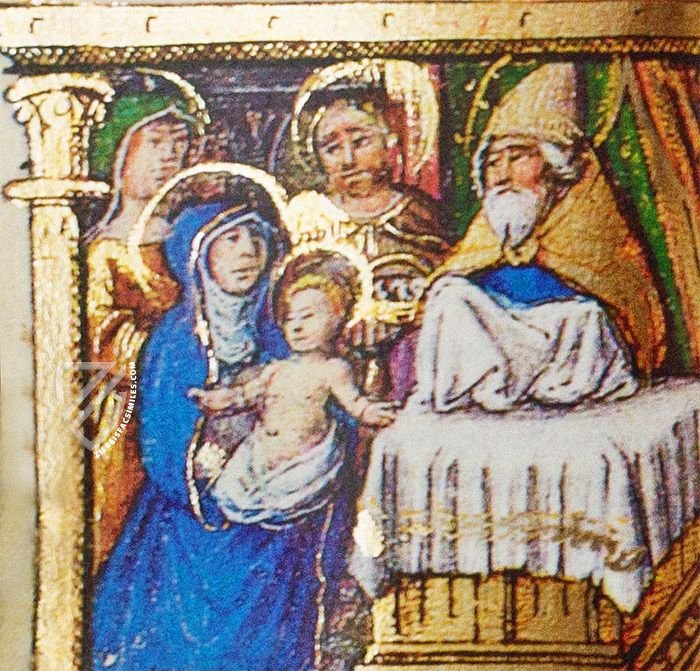 Agony in the Garden of Gethsemane

After the Last Supper, Jesus went off to pray bringing the Apostles Peter, John, and Peter with him. Going off by himself, Jesus falters at the prospect of the ordeal before accepting his fate. Returning to his three companions, he rouses them from asleep saying: “Watch and pray, lest you enter into temptation. The spirit indeed is willing, but the flesh is weak.” (Matt. 26:41)

This is an oft-painted subject because the agony experienced by Jesus is so extreme that he sweat blood, and such an emotional scene allows painters to make full use of their artistic faculties. The accomplishment of the miniaturist here is all the more amazing considering the page can fit in one’s palm, using fine pigments and gold leaf to create this expressive scene. 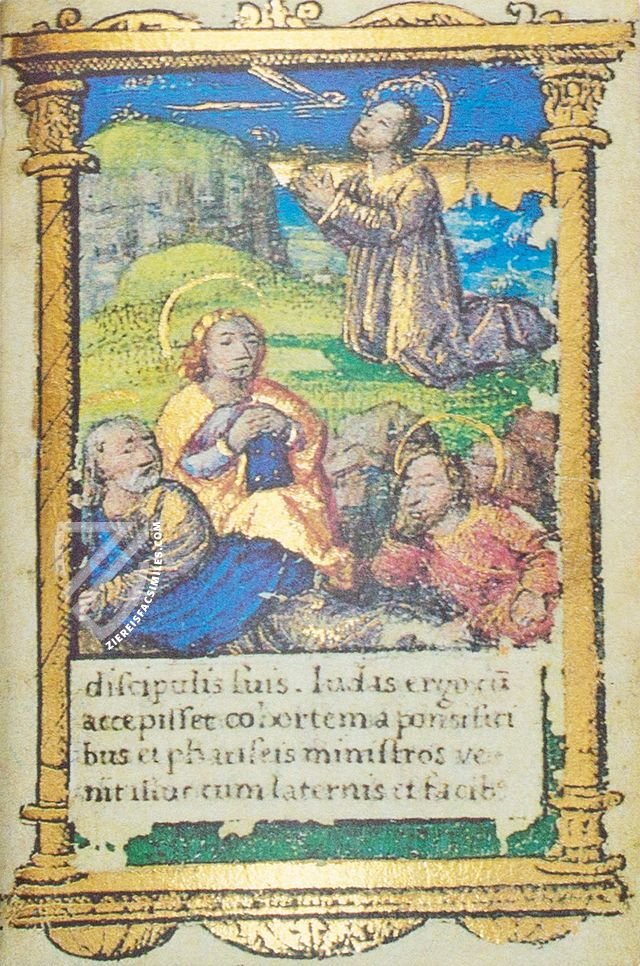 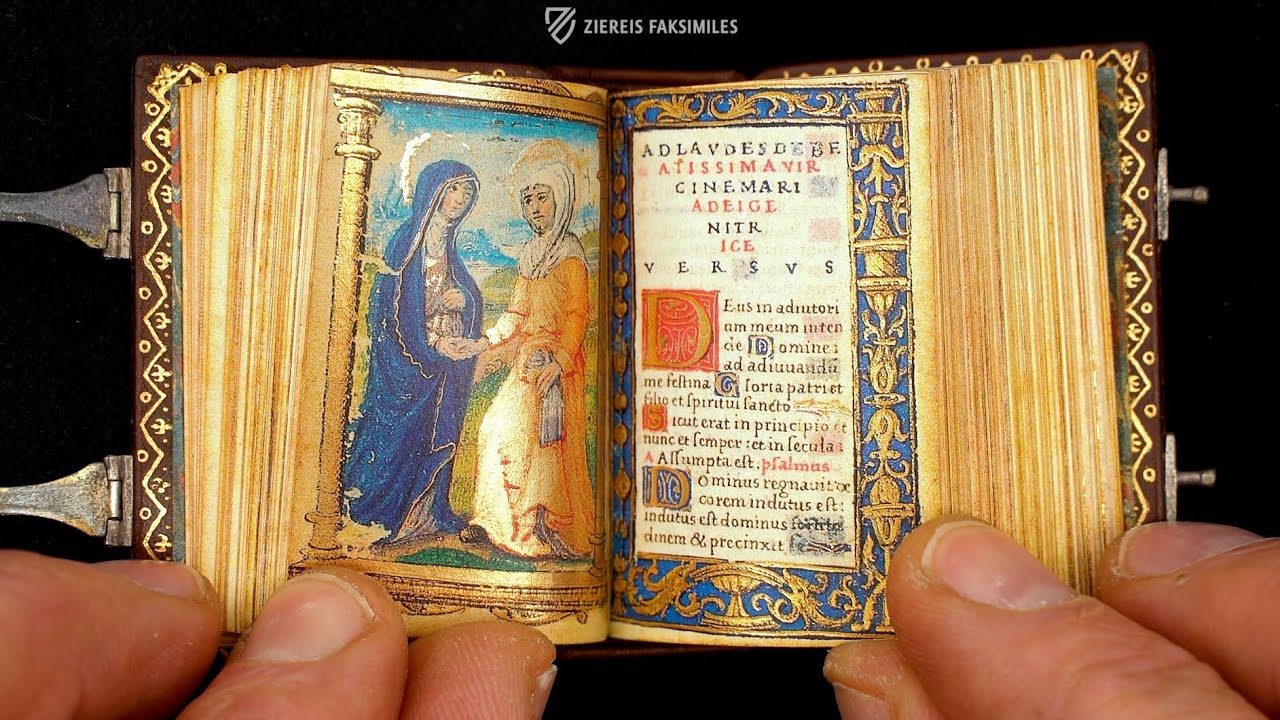 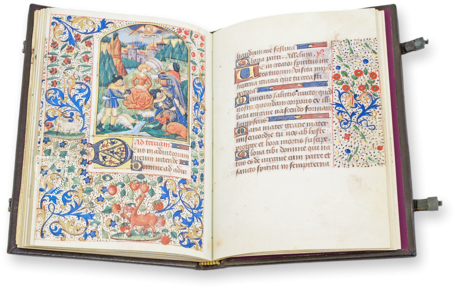 The interplay of light and space emphasized by luminous gold: the masterpiece of the style-defining Échevinage Master of Rouen with 29 full-page miniatures 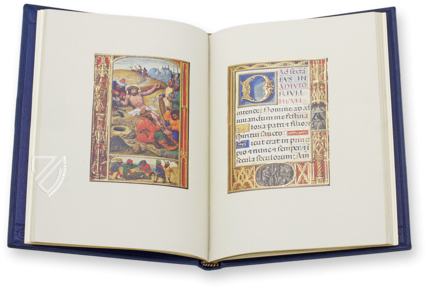 A masterpiece by Simon Bening of cultural and historical relevance: the first manuscript with illustrations of golf