The Picture Bible of Saint Louis arose between 1226 and 1234 and was produced in Paris by the most gifted French illuminators of the time. The work is embellished with an unbelievable number of large colored and gold-adorned miniatures. It is an inexhaustible source about medieval court life for scholars of the humanities and those interested from all subject areas.

Saint Louis was, as his name indicates, a pious man with a fervent faith. Numerous, inconceivably richly designed Bible codices originate from his commission. He had such manuscripts produced not only for his own education and edification, but also for the instruction and strengthening of the faith of his subordinates. The Picture Bible of Saint Louis, parts of which are found today in the Toledo Cathedral and the Morgan Library in New York, is one of the richest book treasures that the king possessed. The biblical manuscript is furnished with over 4,800 breathtaking miniatures.

The bible of King Louis represents an inexhaustible resource for experts and scholars from the fields of theology, history, sociology, art, and art history. The particular research, which is assigned to this astounding document, makes it possible to date the work between 1226 and 1234. The manuscript was designed in Paris by the most gifted illuminators of the 13th century. It served the religious education of the future king of France. Hardly any other work offers those interested from around the world more information about the culture of the French court in the Middle Ages.

Judging by the rich appointment of the work, it is immediately recognizable that the Picture Bible of Saint Louis could only be a book fit for a king. The images of the manuscript illustrate in an excellent manner the events, which are described in the text of the bible. They reflect the fine style of French Gothic painting, which is also found in the great wall paintings of the time. Each magnificent miniature was equipped with high-quality colors and gold leaf in the most varied implementations. The large page format of the book allows each miniature page a truly monumental effect. Due to the rich application of paint and opulent gold embellishment, each page of the work could only be painted on one side. Thus it was ensured that the outstanding picture would not run.

Unique in Every Aspect

Not only the luxurious image inventory of the work, but also its particular textual content make the bible of King Louis a unique book treasure of the Middle Ages. This was not a typical bible, but rather a selection of important bible pages, which were accompanied by a theological commentary. All of that indicates that the passages were used for the pedagogical development of princes and future kings. Saint Louis gifted his bible to King Alfonso X of Castile, who listed it in his will as the most beautiful and richest thing given to him by the king of France. 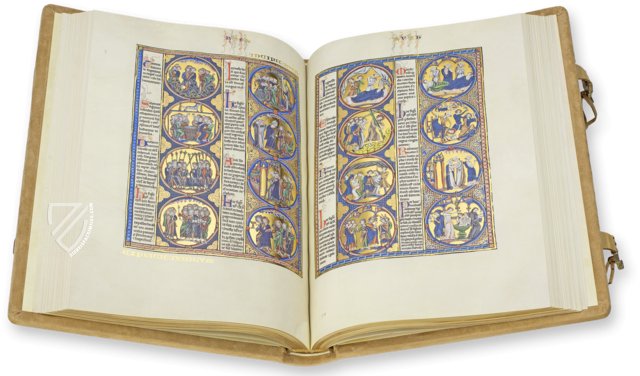 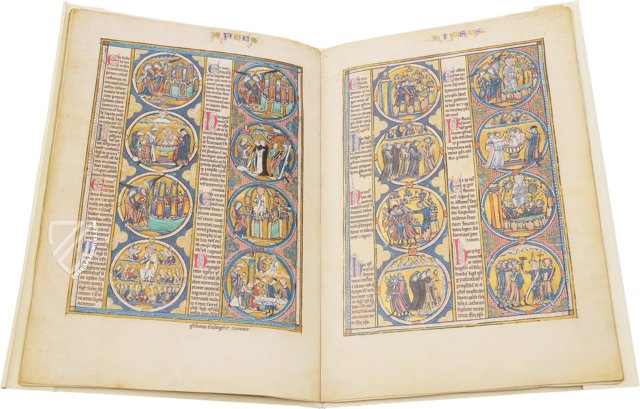 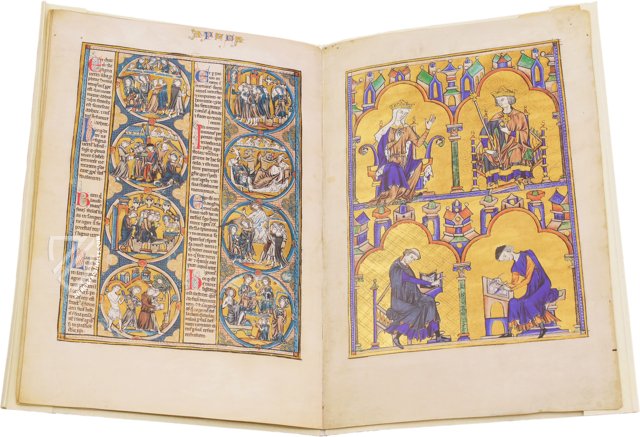 A queen and a young beardless king are presented in the upper register of this miniature and although there is no clear indication of who they are, it is believed to be Blanche de Castile and her son, the future King Louis IX. Thus, both patron and recipient are depicted here. They are presented within architectural frames backed by gold leaf, which has been embossed around the King. His feet stick out from the frame and his mother’s dress overflows from the miniature in a similar manner. 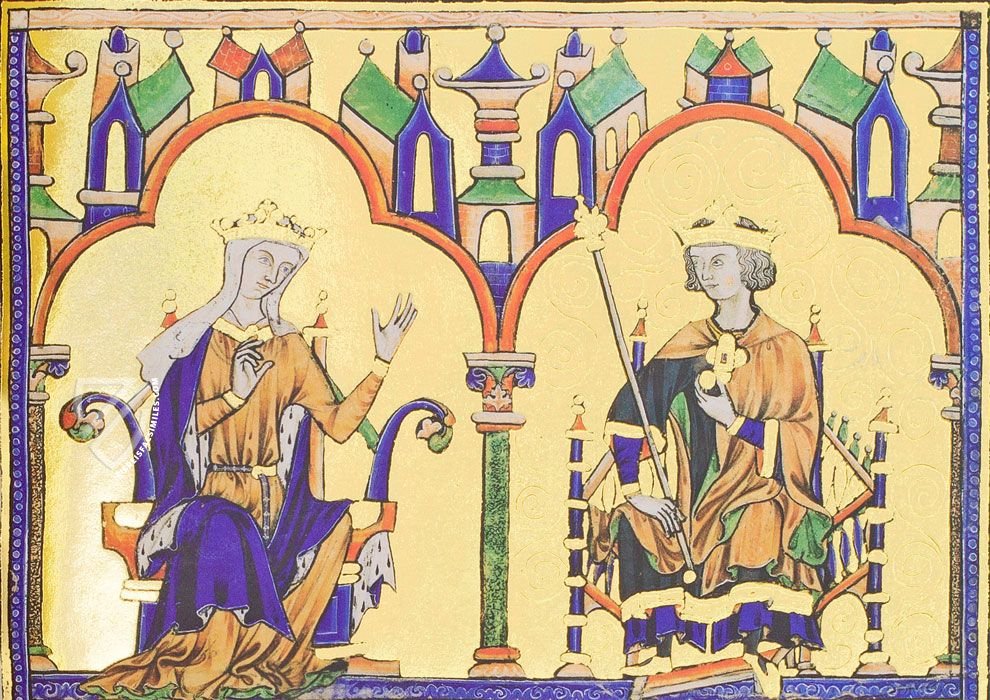 Grand Architect of the Universe

This frontispiece depicting God as the architect of creation with compass in hand is one of the most important images of the Middle Ages. He is enthroned within a magnificent golden quatrefoil mandorla trimmed in green and orange and wears a blue cloak symbolizing humanity. Within the orbed cosmos that he holds, four angels perform his commands as the events of the first ten verses of the Book of Genesis unfold.

The entire background is gold leaf, that and the four angels, two of them inverted, are meant to portray the timeless and spaceless nature of the pre-creation universe. This Gothic masterpiece is strongly influenced by Byzantine art, especially with regard to perspective and God’s appearance as the mild but stern and all-powerful ruler of the world. 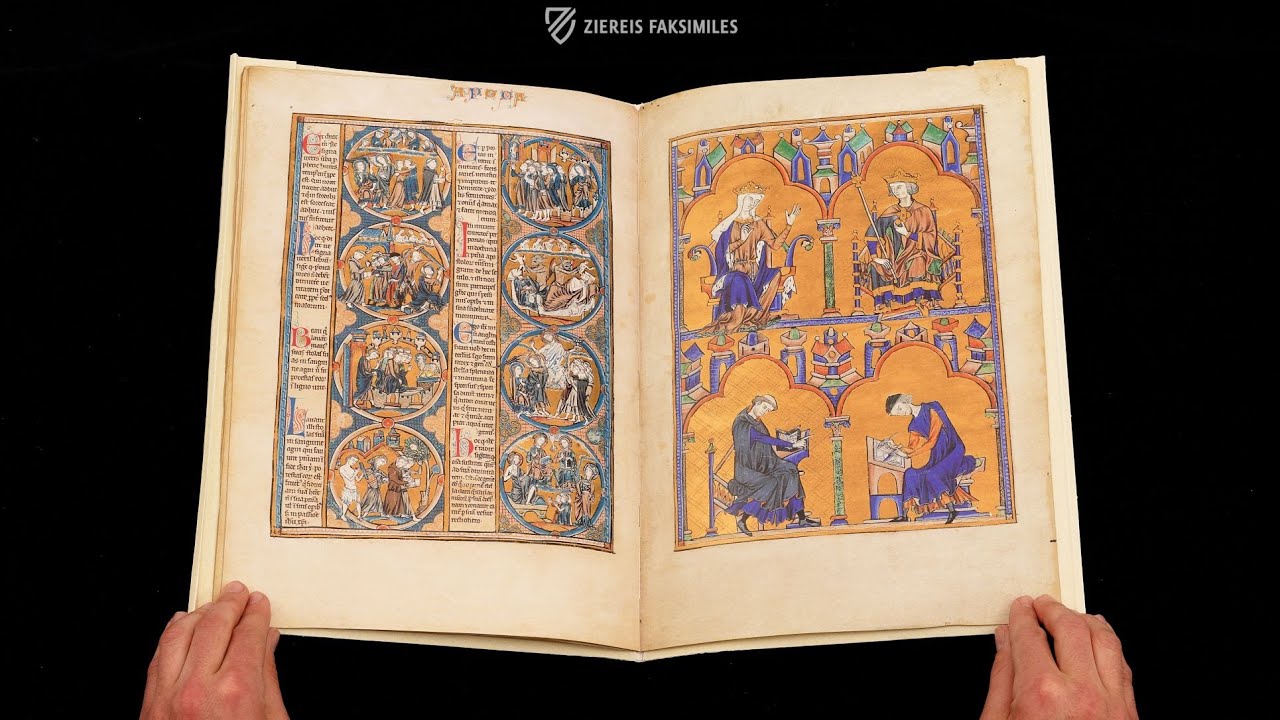 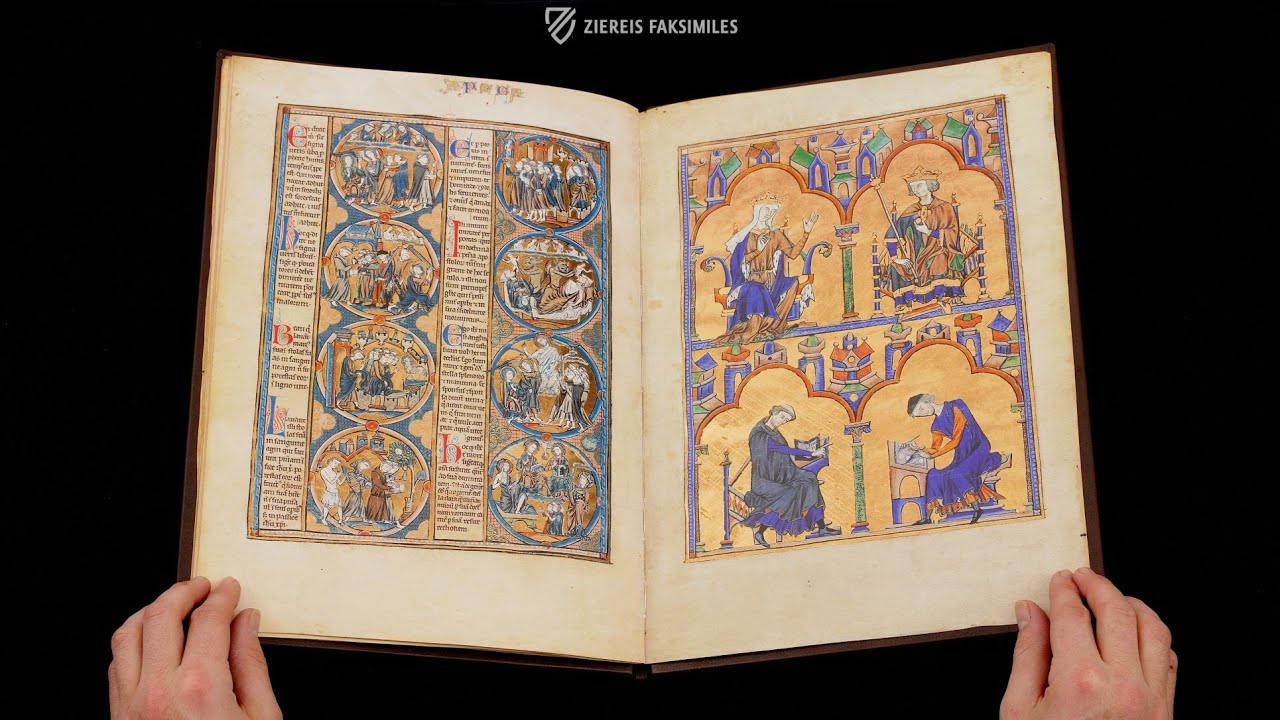 Publisher: Akademische Druck- u. Verlagsanstalt (ADEVA) – Graz, 1995
Limited Edition: 980 copies
Binding: Vellum imitation
Commentary: 1 volume (100 pages) by Hans-Walter Stork
Languages: German, English
1 volume: This facsimile is not complete. Reproduction of the 8 folios of the original document kept in Morgan Library & Museum (Ms. M. 240) as detailed as possible (scope, format, colors). The binding may not correspond to the original or current document binding. The sheets are true to the original edge trimmed.
Price Category: € (under 1,000€)
Edition available
Price: Log in here!
Order / Ask a Question
You might also be interested in: 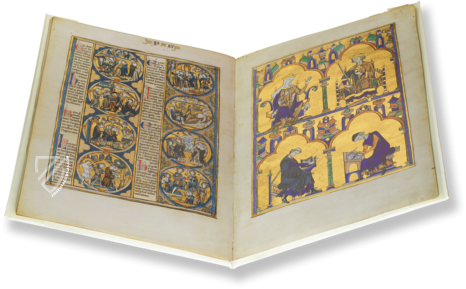 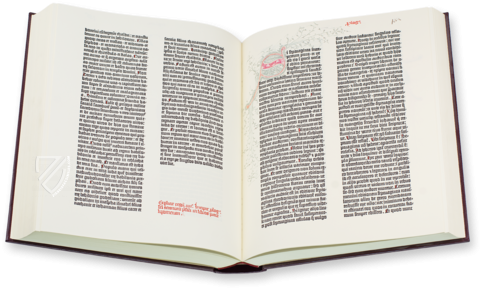 Named after its owner, the French cardinal and bibliophile Jules Mazarin: one of only 49 surviving copies of the epoch-changing Gutenberg Bible