The great polymath Claudius Ptolemy composed a treaty in the 2nd century on geography that lost none of its value through the High Middle Ages. The first maps and atlases worldwide originated from this treatise. The atlas here at hand is one of the most beautiful adaptations of Ptolemy’s teachings. It originated in the 15th century at the behest of King Alfonso V of Aragon. The precious work is adorned with luminously colored maps and numerous ornaments of noble gold leaf.

The astronomer, mathematician, and geographer Claudius Ptolemy of Alexandria composed a concise treaty on the mathematics of geography in the 2nd century, which contained a projection theory as well as the names and coordinates of 8,000 locales of the world as it was then known. His treatise, which was appended with maps at a later time, counts among the first maps or atlases of the world. Long considered to be lost, Ptolemy’s treatise – known by the title Geographia – reemerged ca. 1400 in Italy. Under the title Cosmographia the manuscript was translated from Greek into Latin by Jacobus Angelus de Scarperia and initially distributed across Europe in numerous transcripts and reprints. The edition at hand is a Ptolemaic atlas of the Biblioteca General e Histórica de la Universidad in Valencia.

Claudius Ptolemy was a Greek mathematician, geographer, astronomer, astrologer, music theorist, and philosopher. His three works on astronomy, geography, and astrology in particular were considered to be important collections of data and standard works of science in Europe during the early modern period. Aside from the comprehensive canon of important cities, in his Geographia, Ptolemy composed a geographical treatise in which the known world and its inhabitants are recorded**. His definition of latitudes in the work is still good today. Ptolemy merely transmitted written instructions and tables for the creation of maps, but only made a few rough sketches himself. Later, geographical treatises were written in his name and were appended by numerous maps over the centuries. The Ptolemy Atlas is one of the most splendid and precious reprints of his work.

The handwritten atlas from the library of the University of Valencia was most likely produced in Naples. This illuminated codex is a transcript of the geographical treatise by Ptolemy from the Royal Library of the Castello Nuovo in Naples. The manuscript was illustrated with uniquely beautiful maps of land and sea. The maps shimmer in luminous colors and are hemmed by glimmering frames of noble gold leaf. The maps are accompanied by painted angels presenting the royal crown and escutcheon of Alfonso V of Aragon. He was the patron of the unimaginably expensive manuscript. All of the map titles are recorded in colorful, gilded script and the text of the work is structured by numerous luminous red initials and markings at important points in the text. 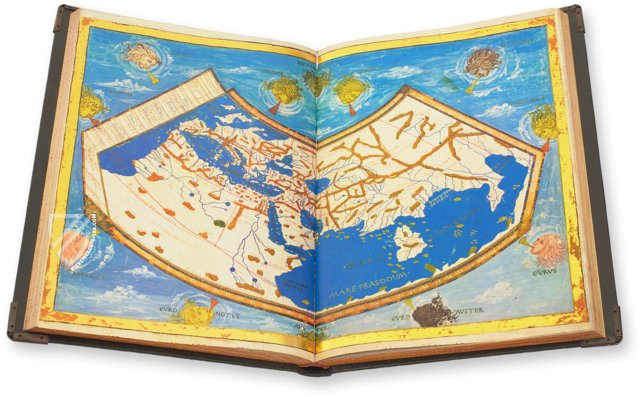 Crete and the Peloponnese

Centered around the southern Aegean Sea, identified here as the CRETICV MARE, this map shows many of the Greek islands including the largest and most populous – Crete – off of the eastern coast of the Peloponnese, the peninsula attached to the rest of the Greek mainland by the Isthmus of Corinth. Important cities are labelled and marked with a dot of gold leaf while a schematic overview of mountains and rivers is given as well. The waters of the Aegean are painted in a deep, uniform blue. 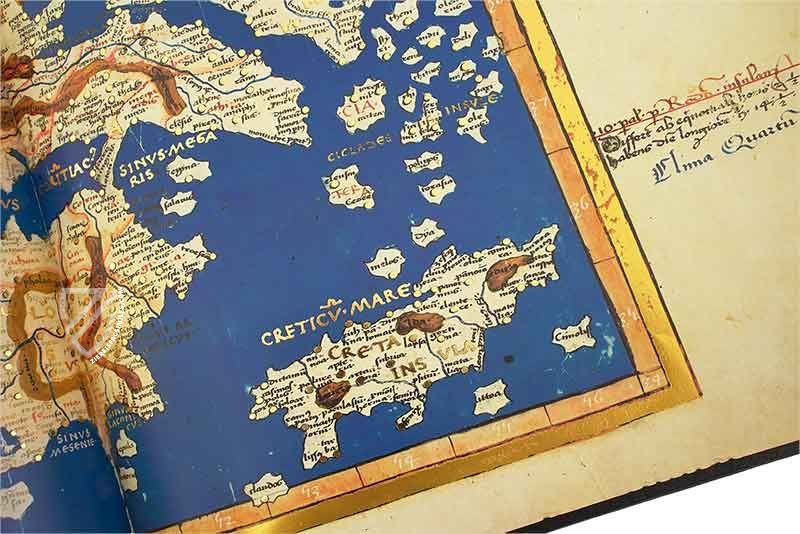 Framed by a thick strip of gold leaf, this extraordinary map of the world as it was known to 15th century Europeans is one of the finest of its kind both in terms of artistry and cartography. The West and Near East are depicted with remarkable accuracy and the curvature of the world is accounted for – medieval Europeans were more than aware that the world was not flat.

One of the most artful features of the map is the depiction of the 12 classical compass winds with their Latin names. Originating from ancient Greece, the 12-wind system is attributed to Aristotle and simpler versions predate Homer. They are typically named after the location from whence they seem to blow, or sometimes according to their character. 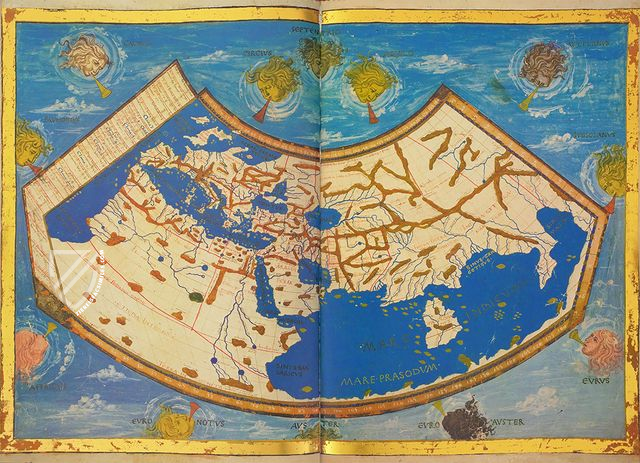 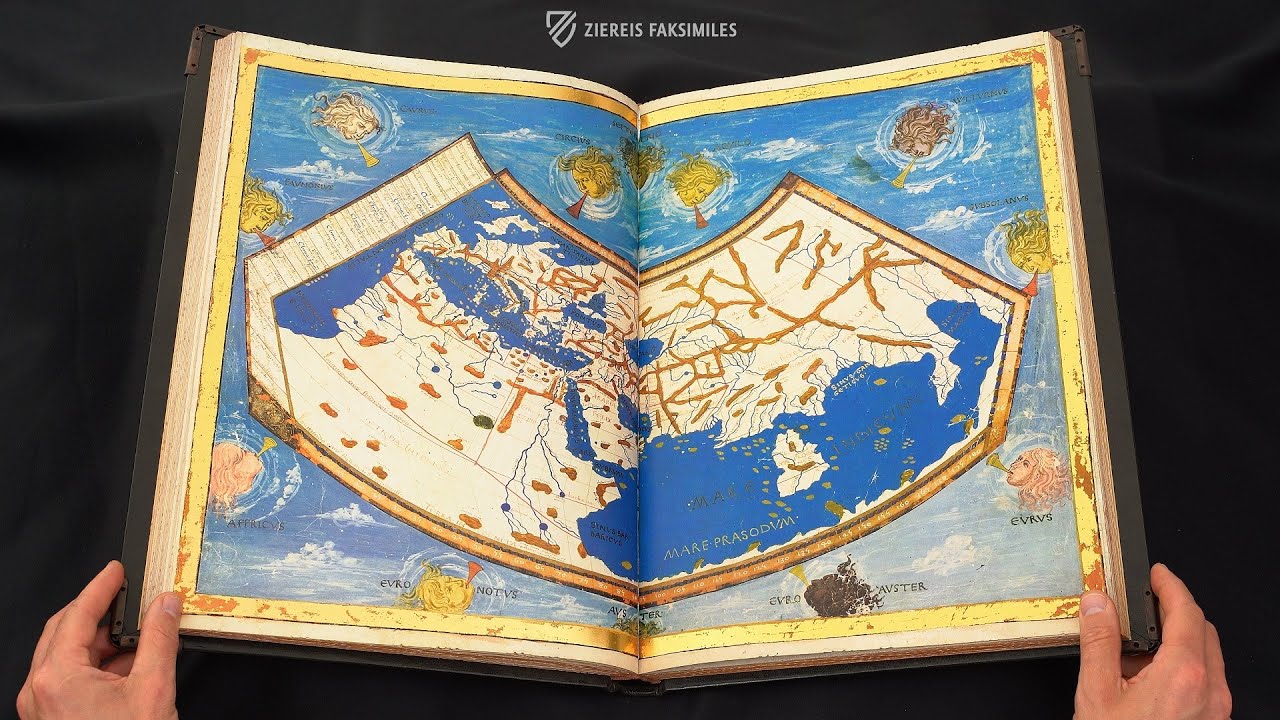 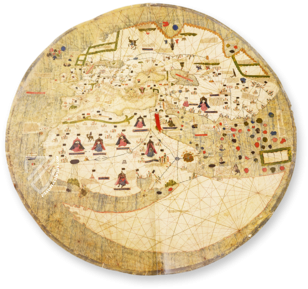