The Sea Chart of Andrea Benincasa originated ca. 1508 in Ancona, Italy and primarily shows the Mediterranean and surrounding regions, including the appropriately-colored Red Sea. Recorded in six different colors and adorned with elements of gold leaf, it is a wonderful specimen from the genesis of the science of cartography during the Italian Renaissance. Important mercantile cities like Venice are depicted with small cityscapes and contemporary leaders are shown enthroned in foreign lands on the margins of the map, which also features mountains, rivers, and numerous flags. The sheer richness of its adornment indicates that the map was created as a luxury item for display in the home of a wealthy nobleman or merchant rather than being designed as a practical navigational chart for sailors, but nonetheless represents the contemporary state of geographic knowledge.

The Vatican Library houses some of the earliest and most precious topographical maps in the world. Found among these maps is the Sea Chart of Andrea Benincasa. This map primarily shows the Mediterranean and surrounding regions, but also parts of the British Isles and the Red Sea. It was used for navigation by medieval seafarers. The map is exceptionally richly adorned with depictions in various colors and gold accents.

Benincasa was a famous cartographer of the Italian Renaissance. From 1476 to 1508, he created important maps for the orientation of sailors and traders. He was probably educated at the cartography school of Ancona. This school was counted among the most renowned institutions of cartography worldwide. Benincasa composed at least 22 sea Rutters, which contained nautical information regarding landmarks, currents, and harbor conditions alongside the most important Rutters. The sea chart in the Vatican Library is **probably his most excellent work.

A Masterpiece of Cartography

The Sea Chart of Andrea Benincasa originated ca. 1508 and reflects the fine style of the Renaissance. The map is recorded in six different colors. In particular, his homes of Italy and the entire region surrounding the Mediterranean were depicted most realistically in the greatest detail. Some regions were less geographically-correct in their representation, e.g. it would be nearly impossible for seafarers to reach the British Isles using the information of this map. Certainly the science of cartography was still very young and Benincasa worked largely without aids. He designed the map according to his own scientific findings and medieval legends. The precious map was ennobled through the employment of gold leaf. 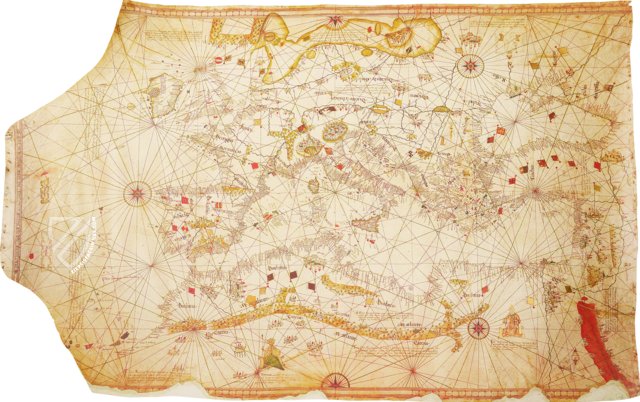 Egpyt and the Red Sea

Dotted with port cities, the Red Sea is colored quite literally, which was common of maps from the period. By contrast, the Nile River, lifeblood of Egypt, is represented by a thin wavy line. The city on its banks is labelled “Babillonia” or Babylon, which should be in distant Mesopotamia. To the west, a figure is seated on a golden throne and wearing a golden crown next to a compass rose while to the south, a war elephant with red tusks and a castle on its back stands ready. 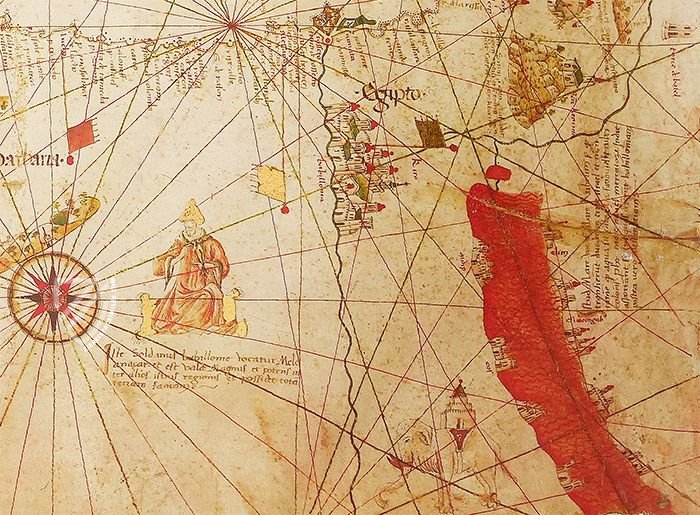 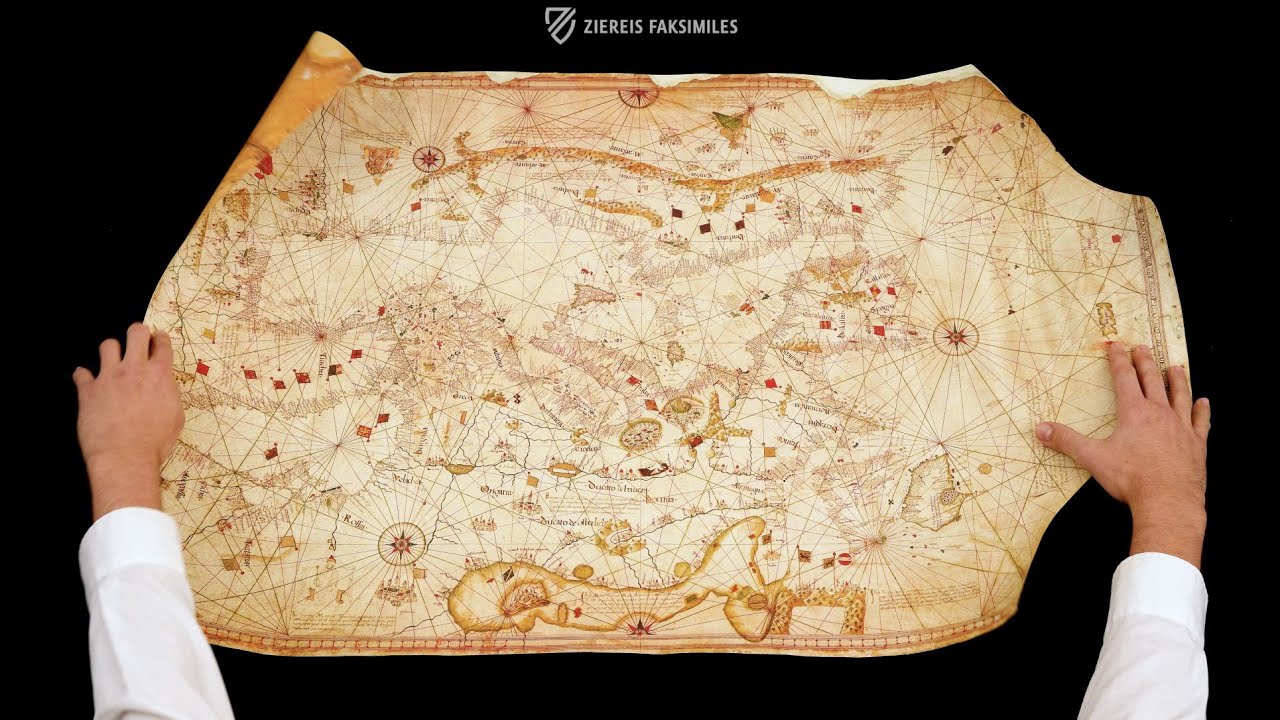 Publisher: Belser Verlag – Zurich, 1984
Commentary: 1 volume by Arthur Dürst
Language: German
1 volume: Exact reproduction of the original document (extent, color and size) This is the latest known Portolan by Andrea Benincasa, and also one of the largest. The shape of the sheet of parchment clearly shows its animal origin.
Regular price without login (like new)890 €
Log in for a Better Price!
Order / Ask a Question
You might also be interested in: 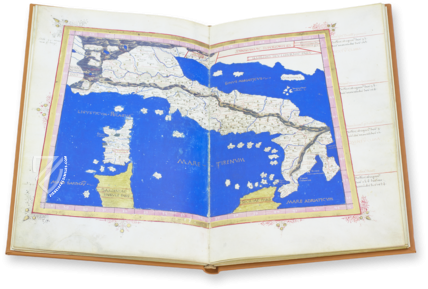 Based on the findings of the ancient cartographer Claudius Ptolemy: one of the most magnificent cartographic masterpieces of the Renaissance for one of the richest princes of his time