The Leggendario Sforza-Savoia was created in 1476 by Cristoforo de Predis and was commissioned by the Duke Geleazzo Maria Sforza of Milan. It is one of the most beautiful illuminated manuscripts of the Italian Renaissance and combines depictions of the New Testament with illustrations of everyday life in the Late Middle Ages. The powerful, colorful illustrations are additionally refined through the use of gold leaf.

The famous dukes of the Sforza family have always been considered to be great patrons of art and music. Some of the most famous works of art originating from the Italian Renaissance originate from the court of the Sforza in Milan, as well as numerous world-renowned illuminated manuscripts. An especially beautiful and valuable example is the Leggendario Sforza-Savoia, which was created by Cristoforo de Predis. The work consists of 316 pages with an astonishing wealth of 324 miniatures in luminous colors and decorated with gold. Stories from the New Testament are illustrated along with scenes from everyday life during the Renaissance.

A Codex for the Ruler

The commission for this elegant manuscript was given by Duke Galeazzo Maria Sforza. He desired a private prayer and meditation book that could depict scenes from the Bible in an environment that was well known to him. He engaged the world famous book illuminator Cristoforo de Predis. He composed one of the most beautiful manuscripts at the court of the Sforza, and was especially famous for his occupation as the architect of the Milan Cathedral. His experiences in the realm of architecture influenced his skillful book illustrations. For his background he chose landscapes inspired by northern Italy, that transport the modern beholder into the duchy of the Sforza.

A Sensible Attention to Detail

Cristoforo de Predis was deaf from birth. He worked as a miniature painter at the court of the Sforza since 1471. Among others, he composed his magnificent codex de Sphaera, one of the most beautiful astrological books of the Renaissance. It is possible that as a result of his inborn disability, he achieved an exceptional power of observation and attention to details in his surroundings. He rendered the nature, the city in which he lived, and the emotions of his fellow man in a distinctly realistic and colorful fashion.

The miniatures of the Leggendario are unusually diverse. Some render scenes from the Old Testament. Among them can be found the stories of the Virgin Mary, her parents, her childhood, and up to the Annunciation. This is followed by the life story of Jesus Christ, which, in impressive pictures, ends with the Day of Judgement. The biblical stories are nonetheless found in the gentle landscape of the Po Valley and in Italian streets, squares, or in simple rooms. Additionally, numerous details of daily life in the Renaissance are illustrated. The experienced painter observed numerous particulars such as marble, wood, or brick in his architectural depictions. He paid attention to the relatively young central perspective and worked intensively with light effects. He refined powerful, luminous colors with the delicate application of gold leaf and combined concrete reality with his imagination in a fantastic style. 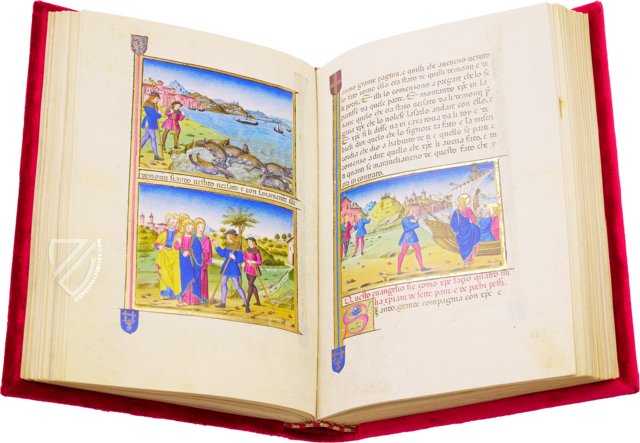 Portrait of the Duke and Duchess of Milan

Standing in an arcade painted sky blue and adorned with stars, Galeazzo Maria Sforza is depicted hand-in-hand with his wife, who must be Bona of Savoy because his first wife, Dorotea Gonzaga, died three years before the manuscript was created. They are both dressed in flowing red robes embellished with cloth of gold and each of their heads is surrounded by a ray nimbus. The towers of a walled city, probably intended to be Milan, can be seen in the distance. 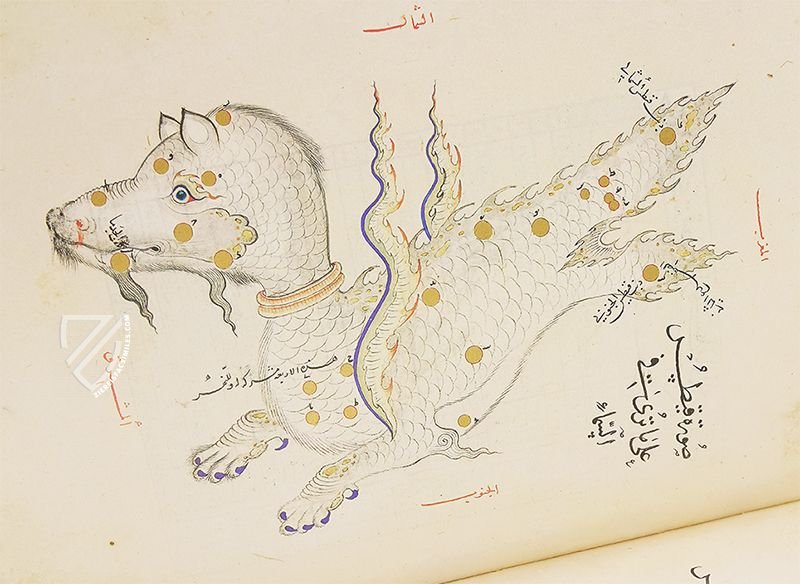 For the first page of the manuscript, Cristoforo de Predis created a full-page miniature of the heraldic symbols of Galeazzo Maria Sforza that was very much in keeping with the Duke’s luxurious artistic taste. Like the other 323 miniatures in the work, it was created using bright, powerful colors and shimmering gold leaf.

Seated in flames and sparks, a lion wearing the enclosed steel helmet of a knight holds a blue stick from which two golden buckets are swinging. The heraldic symbols are presented in a classical architecture with pink marble columns and Corinthian capitals that support an entablature with varying rows of patterns as well as garlands with fruits that are suspended from golden discs or plates. 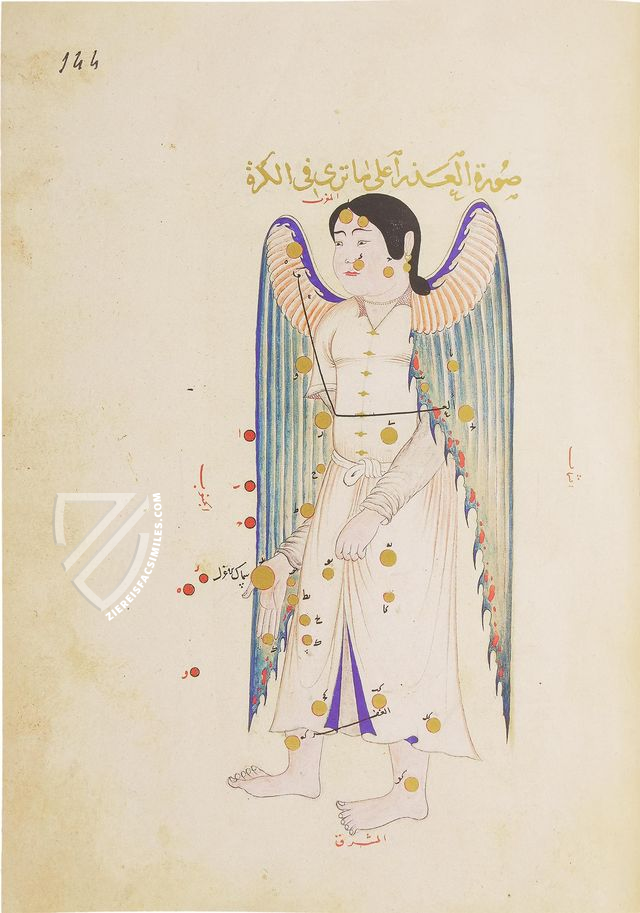 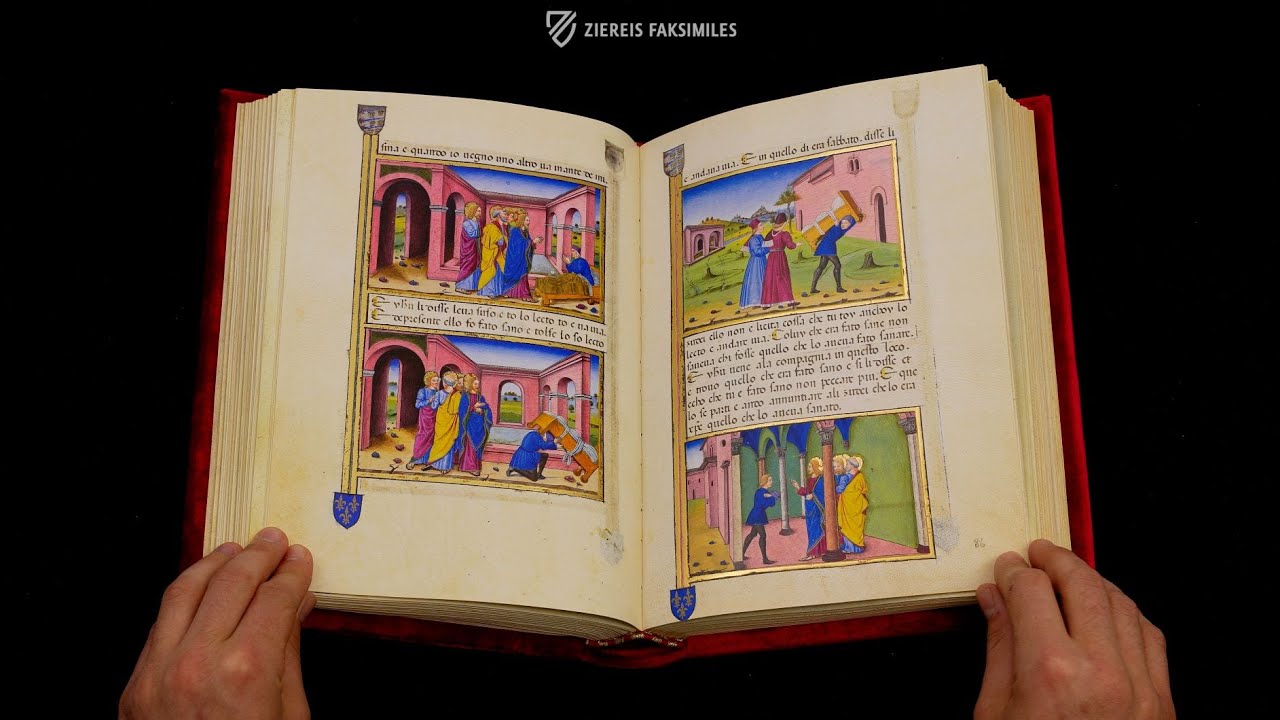 Publisher: Franco Cosimo Panini Editore – Modena, 2013
Limited Edition: 750 copies (99 for Quaternio Verlag Luzern)
Binding: Red velvet with a front plate in center with coats of arms of the Sforza and Savoy families.
Commentary: 1 volume by Pier Luigi Mulas, Giovanni Saccani, and Luisa Giordano
Language: Italian
1 volume: Exact reproduction of the original document (extent, color and size) Reproduction of the entire original document as detailed as possible (scope, format, colors). The binding may not correspond to the original or current document binding. Made at the behest of Galeazzo Maria Sforza, the Duke of Milan, this luxurious manuscript reflects not only the refined tastes of its patron, but also the artistic style characteristic of Milanese manuscripts, as well as the duchy's architecture and landscape.
Regular price (new)5,980 €
Regular price without login (like new)3,880 €
Order / Ask a Question

Publisher: Quaternio Verlag Luzern – Lucerne, 2013
Limited Edition: 99 copies (of 750 copies total print run)
Binding: Red velvet with a front plate in center with coats of arms of the Sforza and Savoy families.
Commentary: 1 volume by Luisa Giordano, Pier Luigi Mulas, and Giovanni Saccani
Languages: English, German
1 volume: Exact reproduction of the original document (extent, color and size) Reproduction of the entire original document as detailed as possible (scope, format, colors). The binding may not correspond to the original or current document binding.
Regular price (new)5,980 €
Regular price without login (like new)3,880 €
Order / Ask a Question
You might also be interested in: 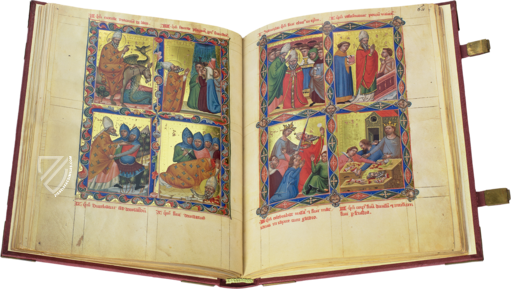 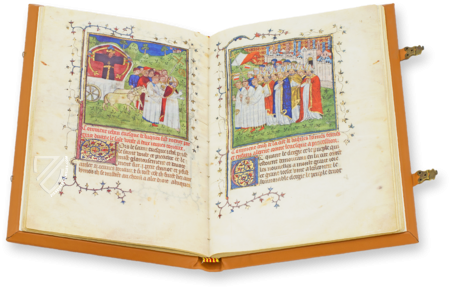 The angelic face of Jesus as a miraculous pilgrimage destination: a colorful French Gothic masterpiece about the stories and miracles of the life-size statue of Christ in Lucca 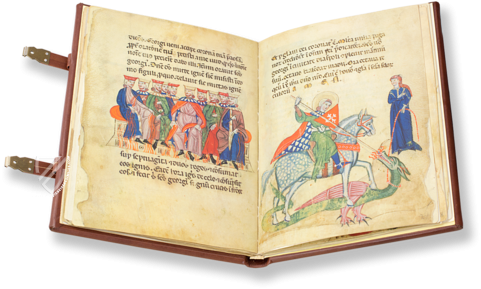 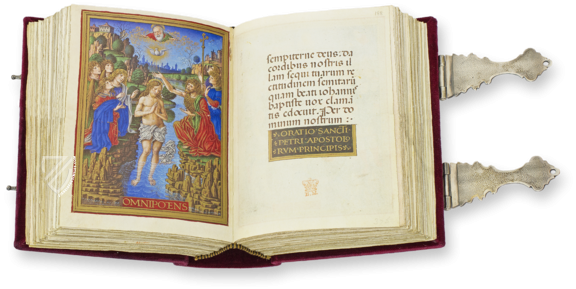 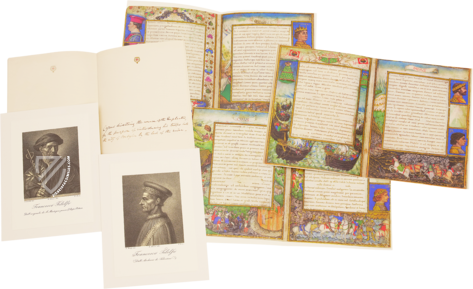 The educational portfolio of a future sovereign in the 15th century: the commentary on an ancient text by 15-year-old Ludovico Maria Sforza to demonstrate his progress as a student