Hardly any other handwritten codex from the Middle Ages is comparable with the breathtaking Sforza Hours. The work was begun ca. 1486 by the Milanese illuminator Giovan Pietro Birago. After a never-explained robbery, work on the splendid manuscript was discontinued ca. 1495 and first completed in 1521 by the Dutch court painter Gerard Horenbout. Long aberrations brought the precious manuscript into the most important ruling houses of the Renaissance. Its incomparably valuable and precious illumination casts a spell on the awestruck beholder.

Books of hours were the most popular prayer and devotional books intended for the laity in the Late Middle Ages and Early Modern Period. The books of hours from the Renaissance Period are outstanding examples of the high art of hand-made book illumination and count among the most beautiful manuscripts that were ever made. The Sforza Hours is a fantastic masterpiece of splendid miniature painting in spectacular colors and rich pictorial adornment. This manuscript is a work whose charming, opulent design is befitting of the paramount position of the Sforza family. The Sforza have been characterized alongside the Medici as the most significant commissioners and patrons of the artistic life of the Renaissance. The splendid book of hours consists of 696 breathtakingly illustrated vellum pages. Alongside 203 full-page miniatures, fantastic bordures in an unending variety of colors and lavish gold adornment adorn the work in excess.

Art at the Court of the Sforza

The book of hours was commissioned by Duchess Bona of Savoy, the wife of Galeazzo Sforza. She was a daughter of Duke Louis the Elder and was married in July of 1468. The dazzling Renaissance prince Galeazzo Maria Sforza was not only known for his lecherous, cruel, and tyrannical character, but he also has gone down in history as a patron of art and music. Some of the most talented artists from across Europe worked at the Sforza court, among them the Milanese Giovan Pietro Birago, the leading miniaturist during the reign of Lodovico Sforza. Birago was entrusted with the commission for the Bona’s book of hours. With this work, he created his masterpiece and simultaneously a principle work of European Renaissance art. Birago was inspired by the painting of Leonardo da Vinci for the depiction of people, Andrea Mantegna was his example for the composition of landscapes. The incomprehensibly precious book illustrations of the Sforza Hours surpassed everything that had previously been known in the world of book art. The codex, which is kept safe today in the British Library in London, can look back on an exciting history.

A Spectacular Journey Through History

There exists a letter from the painter Birago concerning the book of hours, which was addressed to an unknown nobleman shortly before the completion of his masterpiece. Therein he told of a mendicant friar, who stole parts of the still-incomplete codex from him. Some of the stolen pages, which made up approximately one third of the entire manuscript, never resurfaced. After this mysterious art theft and long aberrations, the book of hours finally came into the hands of Margaret of Austria. In 1506, she went with her young nephew, the future Emperor Charles V, to the Netherlands as governor and evolved into one of the greatest patrons of northern Renaissance art. She gave her court painter, the world-famous Gerard Horenbout, the commission for the completion of the unfinished book of hours. In 1520, he supplemented the incomplete vellum pages and appended the work with impressive miniatures. The manuscript could have possibly reached Spain with Charles V, in whose preferred kingdom of Castile it was found 350 years later. The collector John Malcolm of Potlach obtained the book of hours and gifted it to the British library in 1893, where it counts among the most valuable holdings to this day.

Giovan Pietro Birago wrote in the already mentioned letter, that the Sforza Hours, even before it was completed, already possessed a value of 500 Ducats. Thus, it exceeded the worth of Leonardo da Vinci’s famous Virgin of the Rocks by fivefold. This makes it apparent just how astoundingly and richly the furnishing of the fantastic work was designed. The book of hours possesses, from an art historical perspective, a most unique status, that it is a principle work of two illuminators, who worked in different countries and never met one another. The Italian section shows accompanying pictures that can hardly be surpassed in their dramatic and strikingly colorful design. Birago understood how to masterfully reproduce the emotions on the faces of the people he depicted. Horenbout appended 16 miniatures and two bordures in the enchanting Flemish style to the book of hours. His illuminations distinguish themselves through their rich detail and it is easy to see that the painter was striving for a stylistic harmonization of his depictions with the Italian illustrations. Thus he was successful in uniting the beloved painting style of Flanders with the style of his predecessor, Birago, in a harmonious manner. 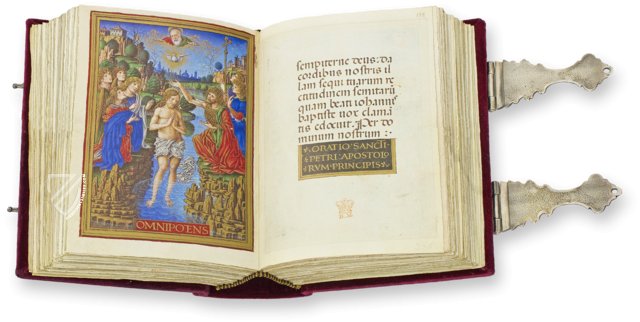 Wearing a fancy red collar with gold décor, a long-haired greyhound is right on the heels of an exceptionally fat rabbit with deep-set, frightened eyes. The comparatively lean greyhound has a fierce look in his eye, tongue hanging hungrily out of his mouth in anticipation, and is bounding with both front legs in the air. Masterful brushstrokes add texture to their coats. A castle can be seen standing still across the river in the blue background of this magnificent bas-de-page miniature.

Commemorated on Palm Sunday, Christ’s triumphal entry into Jerusalem marks the beginning of the Passion cycle. Christ is depicted riding on a donkey, which symbolizes peace in contrast to a horse, and accompanied by a procession of his disciples proceeding on foot. The citizens of Jerusalem have come out to meet him, some lay their clothes on the ground while one climbs a tree for a better look.

The figures in the scene are depicted with expressive, unique faces and are brightly dressed in the style of Renaissance Italy. By contrast, Christ and his disciples wear monochrome robes. Subtle strokes of gold ink, especially Christ’s halo, further embellish the incredibly rich color palette. The caption IN ILLO TEMPORE translates to “at that time”. 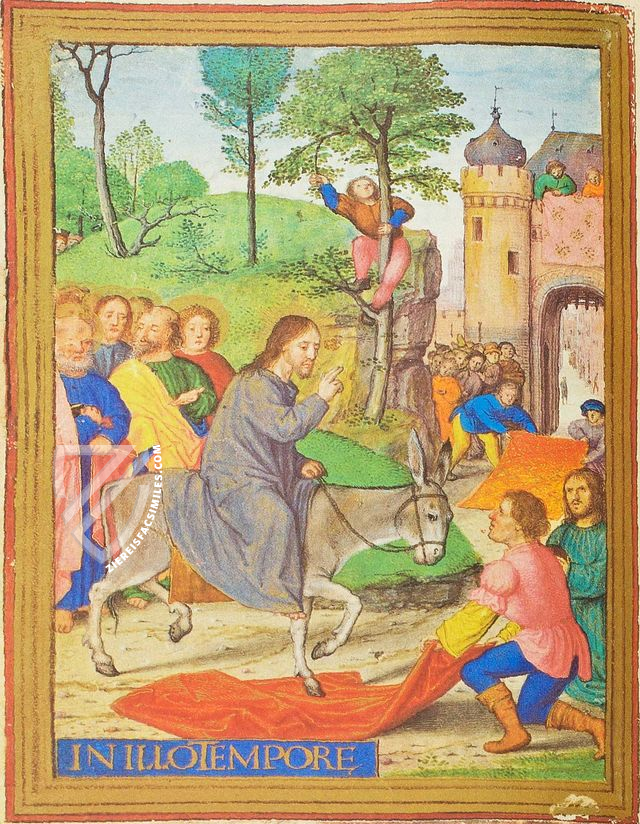 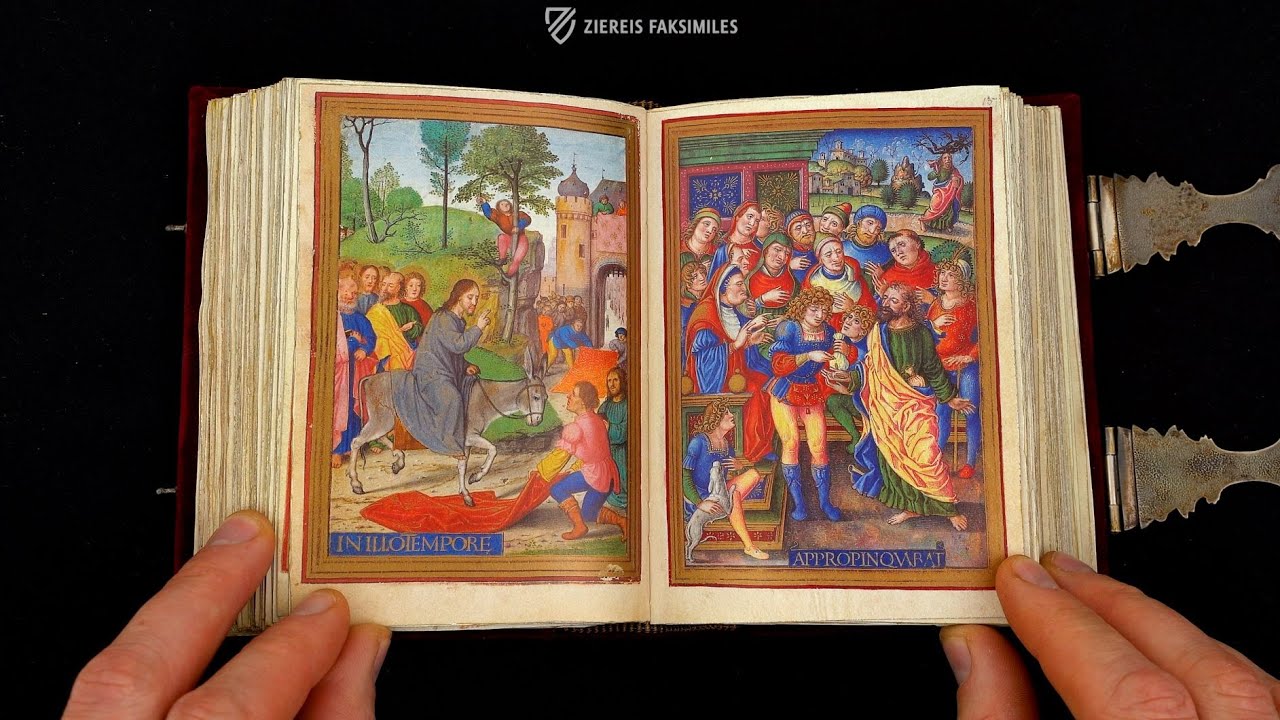 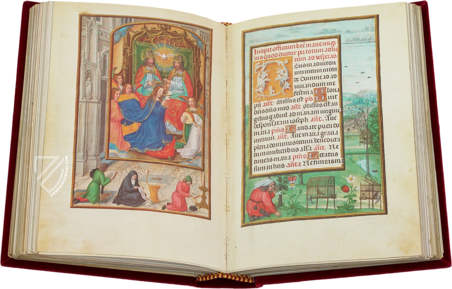 Stolen by the Nazis, auctioned in 2014 for 13.6 million US dollars: the famous Book of Hours from the Rothschild Collection, illuminated by Gerard Horenbout, Gerard David, and Simon Bening