A unique masterpiece from one of the greatest miniaturists of all time: Simon Bening. These 64 spectacular miniatures were painted on vellum, mounted on four panels, and set within a gilded wooden frame. It is not known who commissioned these miniatures or in what form they were originally meant to appear, in fact, little is known about the provenance of the mysterious masterpiece before the 19th century. Nevertheless, they are counted the finest works of 16th century Netherlandish art and are distinguished by airy scenes of great intensity and sumptuous colors. They consist almost entirely of closeups full of iconographic details to emphasize the people and events. The pictorial narrative begins with the legend of Mary, covers the life of Christ, and ends with images of the Ascension of Mary and the Last Judgement.

From the hand of the most important illuminator of the 16th century comes one of the most unusual artworks of the genre. The Bruges miniaturist Simon Bening, whose works today number among all of the greatest treasures of book art, completed 64 miniatures around 1520, which were not compiled into a book, but rather divided among 4 gilded wood frames. The small-format and at the same time unbelievably impressive paintings of the life of Christ are unquestionably counted among the best of what the highly-acclaimed Flemish book art of the 16th century produced.

One of the Greatest Artists of his Time

The artist of the so-called Stein Quadriptych, Simon Bening, was already lauded by art connoisseurs in his lifetime as one of the best masters of illumination in Europe. Born in Ghent around 1483, he learned his trade in the tradition of his miniaturist-family (his father was a teacher, his daughter was in turn active as a court painter at the English royal court) and then went to Bruges, where his talents garnered great fame. He worked for such royal commissioners as Charles V and for customers from the upper strata of society whose names still have meaning today, e.g. for Cardinal Albrecht von Brandenburg. The uncontested master of 16th century book art produced books of hours above all, but also genealogical charts, e.g. for the royal houses of Spain and Portugal, or small portable altar pictures on parchment.

The so-called Stein Quadriptych stands out among the creations of Simon Bening as it does from all of art history as a unique artwork in this form. A total of 64 miniatures of 7.2 x 5.3 cm, painted on vellum, are mounted on four panels. It can be conjectured whether the individual pictures were intended originally as illustrations for a breviary or were to be compiled loosely into an album. Nevertheless, the purpose and the original way in which it was stored (according to recent research, the modern wooden frames could originate from the 19th century) remains untold. Similarly mysterious is the question of the patron of the unusual work of art and the additional history of the Stein Quadriptych up to the 19th century. It was then that it first emerged from unknown circumstances in the possession of the Parisian art dealer Charles Stein, who also leant the work his name. It passed through the hands of various owners until it ultimately came to Baltimore, where it is housed in the Walters Art Museum as the highlight of the collection.

Regardless of the all the mysterious circumstances, the miniatures are numbered among the best of what Flemish art produced in the important 16th century. Simon Bening created a true masterpiece of illumination art with the 64 small-format miniatures on vellum. Airy scenes of great intensity emerge before the eyes of the beholder in a sumptuous burst of color. This was attained by the use of the use of close-ups in particular, which moved the people and events to the foremost margin of the picture. 16 miniatures are arranged in rows of fours on a 33.8 x 27 cm gilded wooden frame, respectively. The events from the life of Jesus Christ begin on the first panel with the legend of Mary and the birth and childhood of Jesus. The next 16 miniatures deal with the baptism of Jesus up to his derision. The entire Passion and Crucifixion of Christ are illustrated on the third Diptychon. The fourth panel finally deals with the events of the Deposition from the Cross to the miracle of the Pentecost and the frame narrative of the legend of Mary concludes with her death and Ascension. In the tradition of the Bruges school, Simon Bening painted these wonderful scenes in bright colors, with lovingly depicted iconographic details and sometimes emphasized with gilt paint. Its art distinguishes itself above all through its light and airy landscapes, with which he anticipated an oncoming tradition of Flemish painting. The Stein Quadriptych of Simon Bening can only amaze with its unbelievable artistry and intense images. 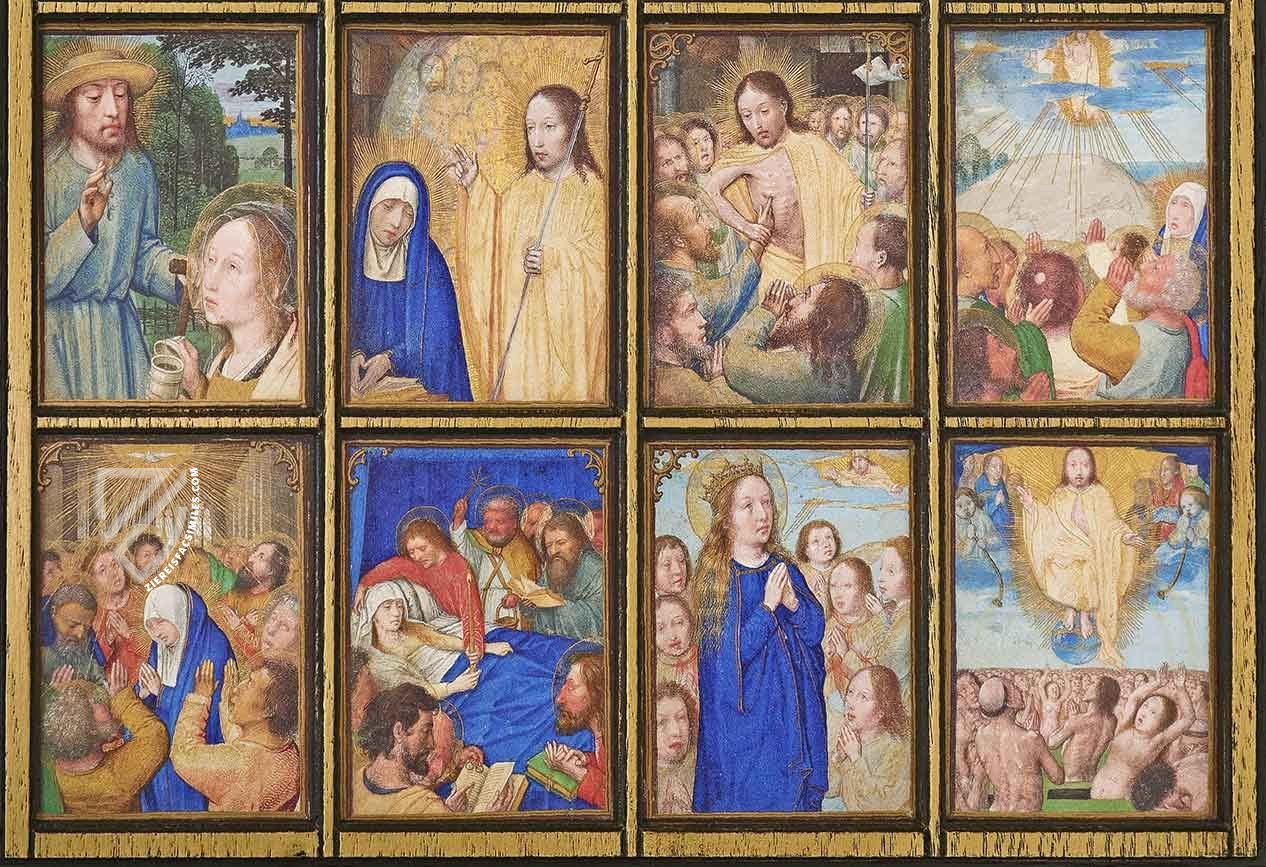 The first panel of this magnificent four-part work by Simon Bening presents scenes from the life of Christ in some of the finest artistry of the early 16th century. Arranged in four rows of four in a refined gilded frame, each of these small miniatures is a masterpiece created with the quality of a large panel painting.

The first row depicts events ranging from before the marriage of Joseph and Mary to the Annunciation, the second covers the Nativity and the Annunciation to the Shepherds. Next follows the Adoration, first by the Shepherds and then by the Magi, depicted along with the Presentation of Jesus at the Temple. At the bottom we see the Flight to Egypt, Slaughter of the Innocents, and a young Jesus disputing with the so-called “Doctors”. 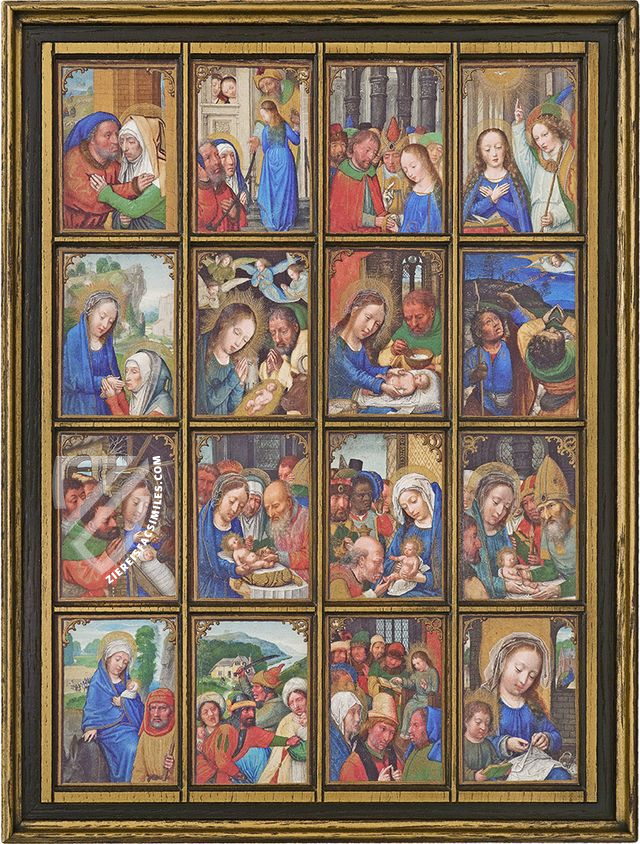 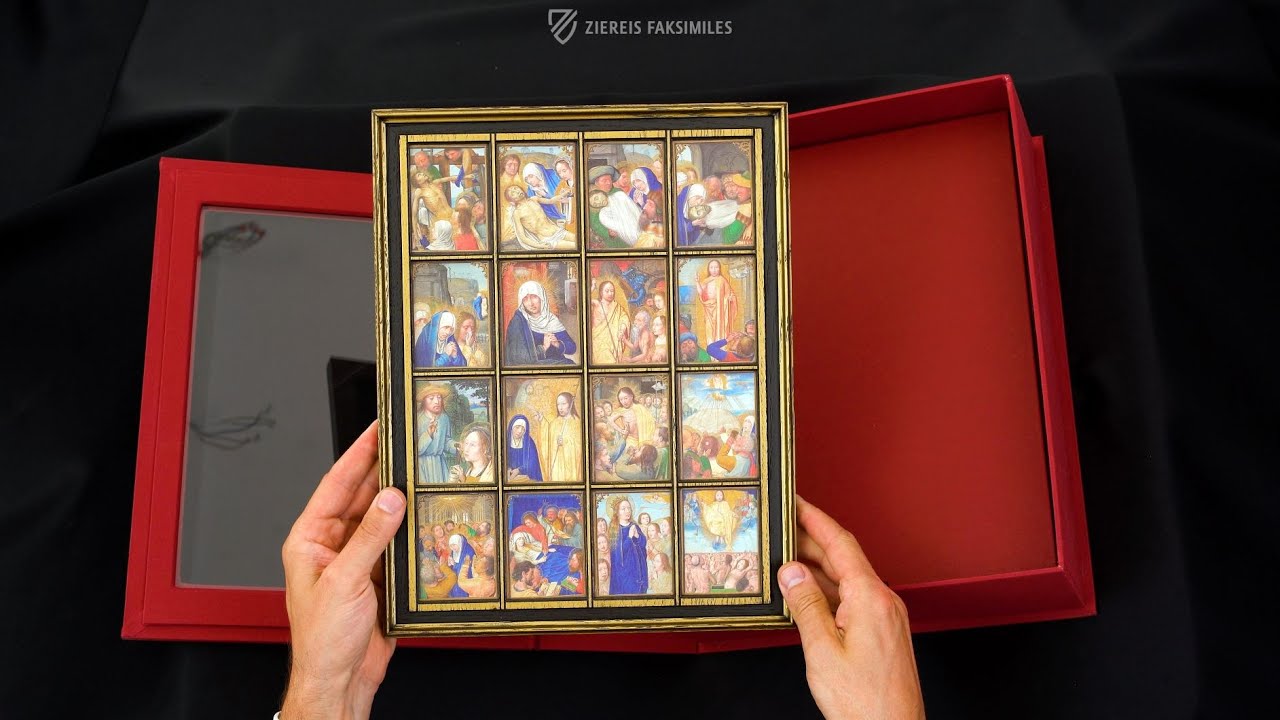 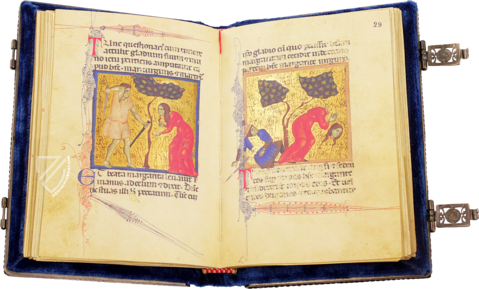 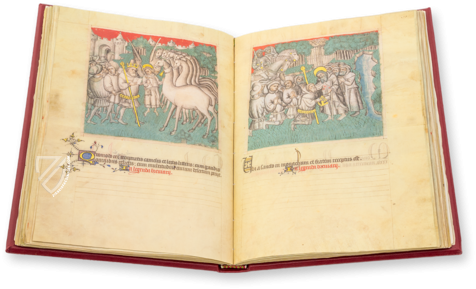