The Tacuinum Sanitatis is a health guide from the Middle Ages, which was produced in the Rhineland in the middle of the 15th century. Every page of the work is embellished with a luxurious miniature. The book is based on the medical tractate of the Arabian doctor Ibn Butland and also provides, alongside advice for a healthy lifestyle, interesting information about everyday life in the Middle Ages.

In the 11th century, the doctor Ibn Butlan composed the medical work Taqwīm as siḥḥah. Arising from the foundations of this work is the Latin book series Tacuinum Sanitatis. These were exquisite illustrated codices from Vienna, Rome, Lüttich, and Paris. The Paris Codex contains particularly fine and appealing miniatures. The manuscript is a medical guidebook with suggestions for a healthy lifestyle. Each page of the work is illuminated with an elaborate miniature, which is accompanied by a clarifying text. The lordly picture book is found today in the French National Library in Paris.

Medicine in the Middle Ages

Ibn Butlan’s health guide is an interesting and historically significant source about medicine and everyday life in the Middle Ages. In his mind, various elements were important for a healthy lifestyle: proper diet, activity and enough sleep, and a balanced emotional state. He recommended a life in harmony with nature, which guarantees people health and well-being. The miniatures depict typical medieval dishes as well as production of various foodstuffs and important material goods.

In the miniatures of the Paris Codex, the gifted but unfortunately anonymous illuminator could live out his full, fantastic power of imagination. He painted pictures of a confectionary, in which one could buy the most beloved sweets of the Middle Ages, with colorful vessels and sparkling glass bottles. Other miniatures show women producing cheese, noodles, or butter and baking healthy black bread. He depicted merchants selling salt, poultry, oil or candles, and silk fabric. His charming illustrations describe a boundless spectrum of medieval everyday life.

The Arabic codex by Ibn Butlan was first translated into Latin in the 13th century at the court of King Manfred of Sicily in Palermo, and in doing so made it accessible to a huge readership. In Lombardy at the end of the 14th century, the tractate was furnished with an elaborate and luxurious illustration cycle. From here the codex was widely disseminated over the boundaries of Italy. The Parisian edition arose in the Rhineland and contains some of the highest quality miniatures of German Gothic book art. 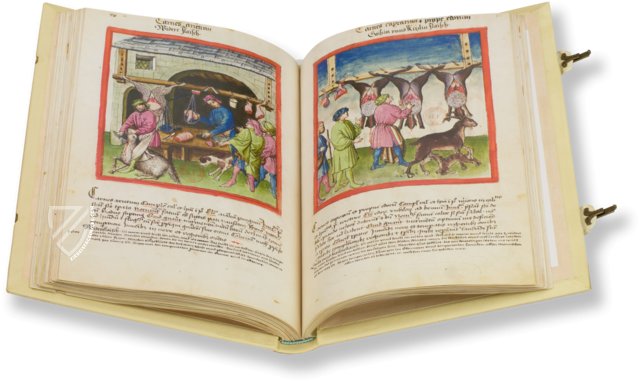 Resembling an eel, the lamprey is a jawless fish that was a beloved element of ancient Roman cuisine. They were popular among the nobility of medieval Europe, especially during Lent when meat was prohibited by religious law, and a favorite food of King Henry I of England. The text states that they “fatten and nourish greatly”, and indeed they are shown here being caught and then kept alive in a barrel full of water so that they can be consumed while still fresh. 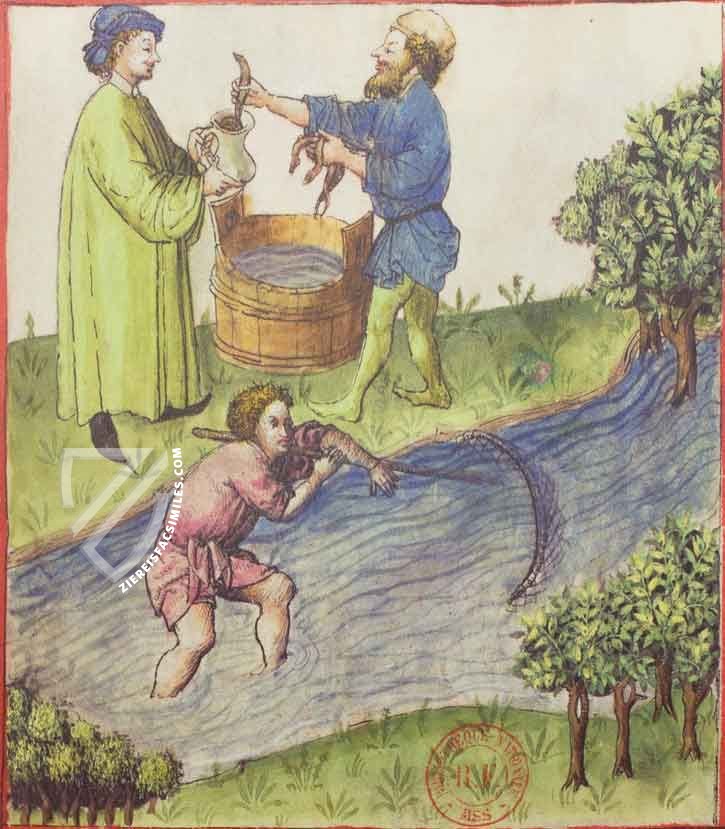 This scene from a butcher’s shop is presented as though the beholder is looking through the front door of the green, tile-roofed building. A large pig carcass is hung upside down by its hind legs next to a leg quarter and another cut of meat. The butcher’s apprentice, a blonde young man dressed in a blue tunic with pink tights, stands ready with a cleaver in hand.

The butcher, dressed in a green hat and tunic with blue tights and knife in hand, begins to carve the carcass up. Its organs have already been removed and the slit in its throat indicates that its blood has already been drained, with the last of it dripping from the pig’s mouth. The text warns against eating meat alone because it will cause “obstructions”, i.e. constipation. 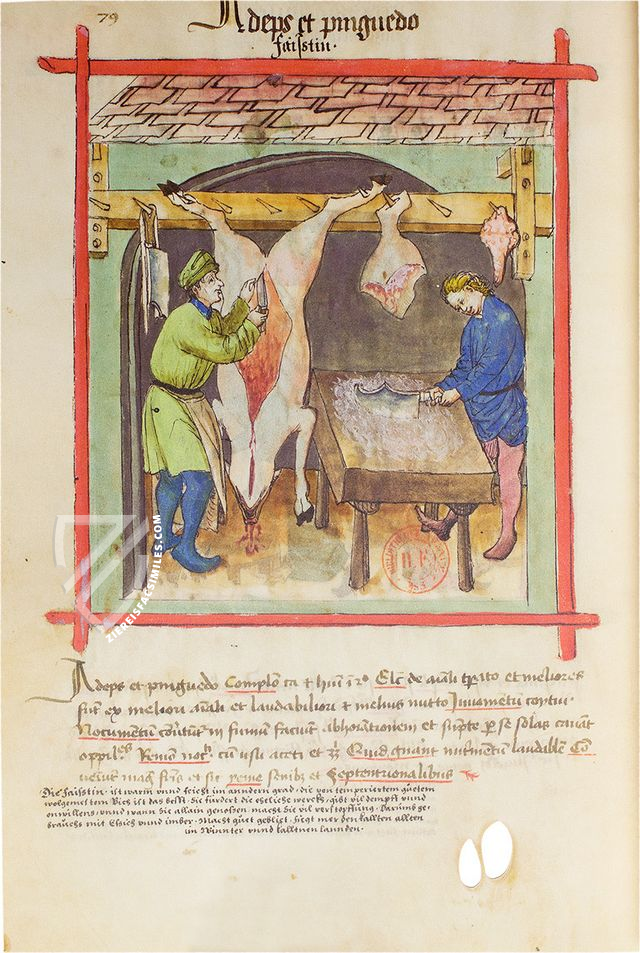 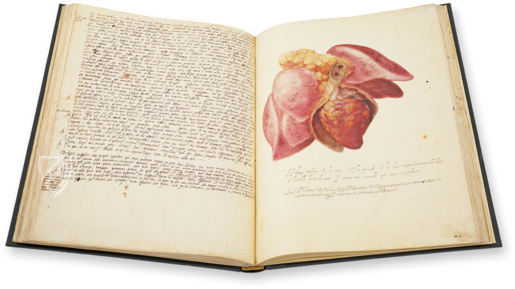 Large format and in color: a fascinating insight into the medicine of the 16th century with 71 realistic anatomical representations of the human body