Xylogr. 47 Bayerische Staatsbibliothek (Munich, Germany)
Description
The Block Book of Saint Meinrad and His Murderers and of the Origins of Einsiedeln

St. Meinrad von Einsiedeln (ca. 797-861) lived as a hermit on the island of Reichenau and later in the Etzel Mountains for many years before he was murdered by two robbers. Two ravens are said to have pursued the murderers and brought them to court, where they were condemned to be burned at the stake. Today, the coat of arms of the monastery and town of Einsiedeln still features two ravens as a reminder. Meinrad was initially buried on the island of Reichenau but in 1039 the abbot had the remains of the man, who had meanwhile been honored as a martyr, transferred to Einsiedeln. In the 14th century, a considerably expanded version of his life story, the Vita sancti Meinradi martyris, was written, translated into German, and subsequently became widely known. Both the German-language blockbook, which only survives in two copies and was presumably printed in Basel ca. 1460–65 on behalf of the Einsiedeln Abbey, and the later typographical editions are based on this later version of the legend. The life of St. Meinrad is illustrated in a fascinating manner by 49 colored woodcuts that take up most of the page in this image-focused blockbook. 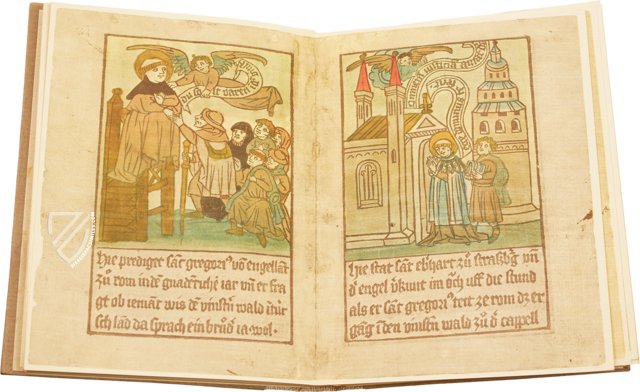 The Arrest of Meinrad’s Murderers

According to legend, two ravens immediately descended upon the murderers of St. Meinrad and pursued them to the court of Count Adalbert II the Illustrious sentenced them to be burned at the stake after being stripped and dragged to the place of execution. Here they are depicted shortly after being arrested: a bearded man wearing a hat pulls them along with a rope that binds their hands as a clean-shaven man beats them with a club. Meanwhile, the ravens continue to harass them mercilessly, earning their place on Einsiedeln’s coat of arms.

The Construction of Einsiedeln Abbey

During the 80 years following the murder of Meinrad in 861, his hermitage deep in the forest was continuously occupied by one or more hermits following his example of leading an ascetic life and providing for pilgrims and the poor. One of these men was Eberhard, the former Provost of Strasbourg, who began to construct a monastery on the site in 934. He then served as the first abbot of what grew into Einsiedeln Abbey, which had one of the most important scriptoria of the Middle Ages.

Eberhard is depicted here on the left beginning construction on the abbey, specifically on cells where sick people can recover. He stands on a platform that is held together by ropes with a trowel in hand as he spreads the mortar on the newly placed stones. Meanwhile, another monk assists him by mixing more mortar with a long-handled tool resembling a hoe. Both men are tonsured and have patient yet diligent expressions on their faces.