The manuscript 515 of the Austrian National Library is short and fragmentary, and yet it is directly related to an event of world-historical significance: the monastery of Lorsch was one of Charlemagne's favorite monasteries. In his annals, the Abbot of Lorsch and later Bishop Richbod of Trier reports on Charlemagne's imperial coronation in Rome on Christmas 800 without pretense or posturing. This is the first written mention of this world-historical event ever! We can see the growth of the annals from year to year until the death of the author in the script. They also contain an important fragment of the Instructio ad competentes by Niceta Remesiana and therefore represent an important primary source on the reign of Emperor Charlemagne for the years spanning 794 to 803.

The keeper of this manuscript presents A Fragment of the Lorsch Annals in this small, handsome book as a full facsimile edition of the remarkable little Ms. 515 of the Nationalbibliothek in Vienna. Although nowadays it contains no more than 8 leaves measuring no more than 235 mm x 168 mm, it is still of uncommon value because of its early date and of the texts contained in it. Interest in this manuscript has been very great, as is proved by the impressive bibliography on p. 26–29. The most important text in it is the large fragment of the Annales Laureshamenses, beginning with the year 794 and ending in 803: it is the original manuscript of this primary source on the history of Charlemagne; the important facts of the reign are filled in year by year.

A Rare Witness to Charlemagne

Its author was probably Richbod, Bishop of Trêves, who was abbot in Lorsch from 784 till 791/2; he died in 804, which fits in with the annals' ending in 803; however the bad Latin makes it impossible that it was written or dictated directly by him. It was not written in Lorsch, but in a scriptorium of south-west Germany, perhaps Trêves. Later the manuscript went to Reichenau, where the Old High German poem was written on a blank space and where the first epigraph of the annals was made. The last text in the manuscript has recently been recognized as an important fragment of the Instructio ad competentes by Niceta Remesiana, a contemporary of Ambrosius, whose works are nearly completely lost. 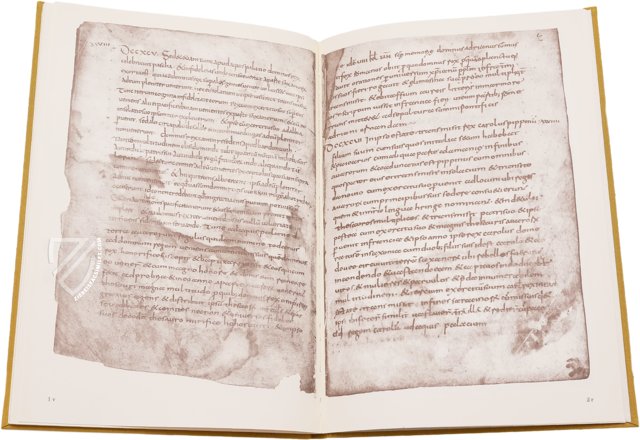