The post-Carolingian manuscript Constellations from Antiquity was created around the year 1000 in France’s Fleury Abbey, a center of medieval astronomy. This well-preserved transcript of a doctrinal poem by the famous ancient poet Aratus impressively illustrates the collected astronomical knowledge of antiquity: 23 delicately colored pen drawings of the constellations, seven celestial maps, as well as hemispheres, planispheres, and the planetary orbits with the zodiac adorn this historically significant illuminated manuscript.

Constellations have been the decisive signpost for sailors, commercial caravans, and travelers for thousands of years. Today, technical innovations have replaced the constellations as navigators for travelers, but the fascination with the constellations that we have encountered every night since humanity's inception continues unabated. From antiquity to the Middle Ages, or at least until the end of the 12th century, all treatises on constellations in Europe went back to the Greek celestial description of the poet Aratus of Soloi (ca. 310–240 BC). As the only source of reference, his work is of inestimable importance and is also the textual basis for the *Constellations from Antiquity.

Aratus – the Ancient Poet of the Stars

Aratus wrote his astronomical didactic poem between 276 and 274 BC at the Macedonian court and gave his poem the title Phainómena, which means "Appearances". Aratus’ work also became known in Rome, where Claudius Germanicus (15 BC – AD 19), a grand-nephew of Emperor Augustus, translated the work into Latin. This translation, the Phaenomena, eventually enshrined the astronomical doctrinal poem into a Christian context. Aratus explained the orbits based on the position of the constellations: the Tropic of Cancer, Tropic of Capricorn, Equator, the zodiac, and finally the Milky Way. In his remarks, the ancient scholar differentiates between fixed and wandering stars and explains his findings on the five planets.

The Introductory Miniature – The Art of the Carolingians in Ancient Tradition

In the introductory miniature (fol. 11v), the poet is set in the midst of his writing a memorial: framed by two Corinthian columns, Aratus debates with his muse Urania concerning the celestial globe standing between them. The group of figures with the poet Aratus and his muse Urania is, except for one other manuscript, unique in the history of art and of inestimable importance. This miniature with folding chair, toga, and the globe stand with lion's feet is exemplary of the classical tradition, as it was praised in the art of the Carolingians.

In the Center for Astronomical Studies: Fleury Abbey

Through his return to the knowledge of antiquity, Charlemagne initiated a systematic renewal of the sciences. In the course of developing the early medieval monastic schools into important scientific centers, the Fleury Abbey in Saint-Benoit-sur-Loire east of Orléans became the most important center for astronomical studies in the 10th and 11th centuries. The abbey established itself through its impressive technical equipment: numerous celestial globes and various devices for the systematic observation of the stars were part of its inventory as well as a huge library, which was housed in a separate multi-story building and represented the heart of Fleury. In this place of accumulated knowledge and scholarship, the manuscript Constellations from Antiquity was copied ca. 1000 from the ancient original and illustrated in rarely seen splendor. Even after more than a thousand years, the impressive craftsmanship with which the text of the Constellations from Antiquity was embellished by spirited and delicately colored pen drawings remains extraordinary. These drawings are not only testimonials to medieval book art, but allow for fascinating insights into the image of the cosmos, which dominated the imagination of astronomers at that time.

The Astronomy Book of the Post-Carolingian Era.

The parchment manuscript, despite its thousand years, is exceptionally well preserved. This historic document received its current leather binding with blind embossing in London in the 17th century and is adorned on the front and back covers with geometric motifs and embossed images. The illuminated manuscript was privately held until 1913 and was then donated to the National Library of Wales in Aberystwyth, where it is kept today under the signature Ms 735C. Since then, it is considered to be the oldest manuscript of the National Library of Wales in Aberystwyth and is guarded as a special treasure. In the face of the technical achievements of our time, in which high performance computers and giant telescopes make the capabilities of a single human seem insignificant, it is all the more astonishing what observations the ancient poet Aratus wrote in his didactic poem, which fascinates the world to this day. 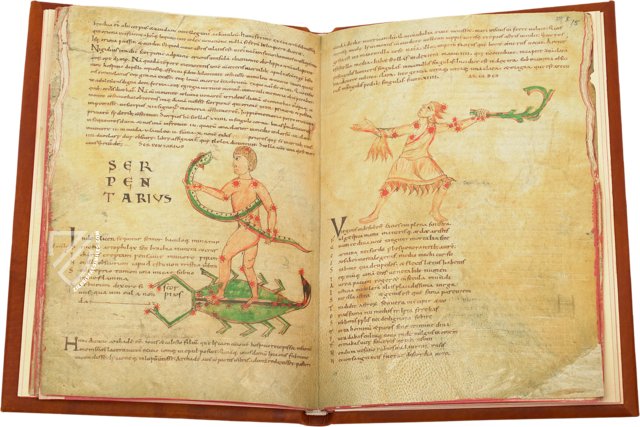 The seven planets of the Solar System that were known to astronomers a thousand years ago are depicted as portraits of human faces spinning in circles labelled in Latin. They are surrounded by the Zodiac symbols that rule over the planets and the mere mortals who live upon them. These playful pen and ink drawings are remarkably naturalistic for the period and created with expressive individual faces, e.g. Virgo is shrugging her shoulders with a sad look on her face. 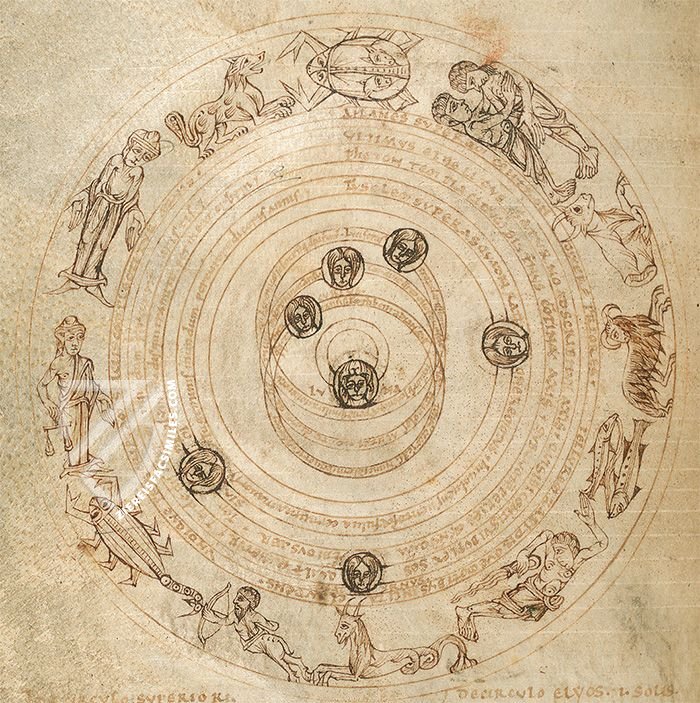 One of the most beloved figures of ancient mythology, a Christianized version of Hercules continued to be praised during the Middle Ages as an allegorical figure and role model for bravery, wisdom, and morality. Furthermore, his return from the underworld and later ascent to become a constellation was seen as Christ-like.

Aside from the Golden Fleece, the most easily recognizable symbols associated with Hercules are shown here: his gnarled club, the Nemean Lion, and the snake sent by the Goddess Hera to kill him as a baby, which he strangled. Hercules has a piercing look on his face but the lion is depicted as oddly friendly, almost cartoonish, and looks directly at the beholder. Red-orange stars represent the arrangement of his constellation. 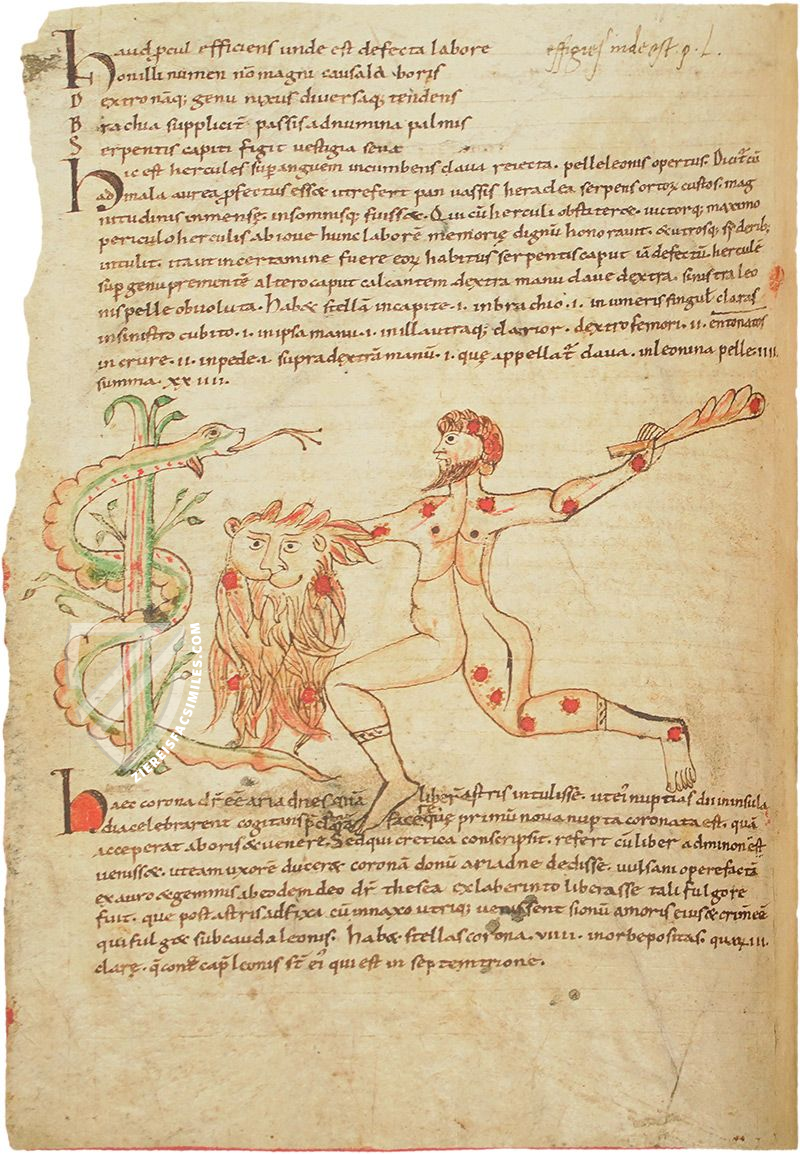 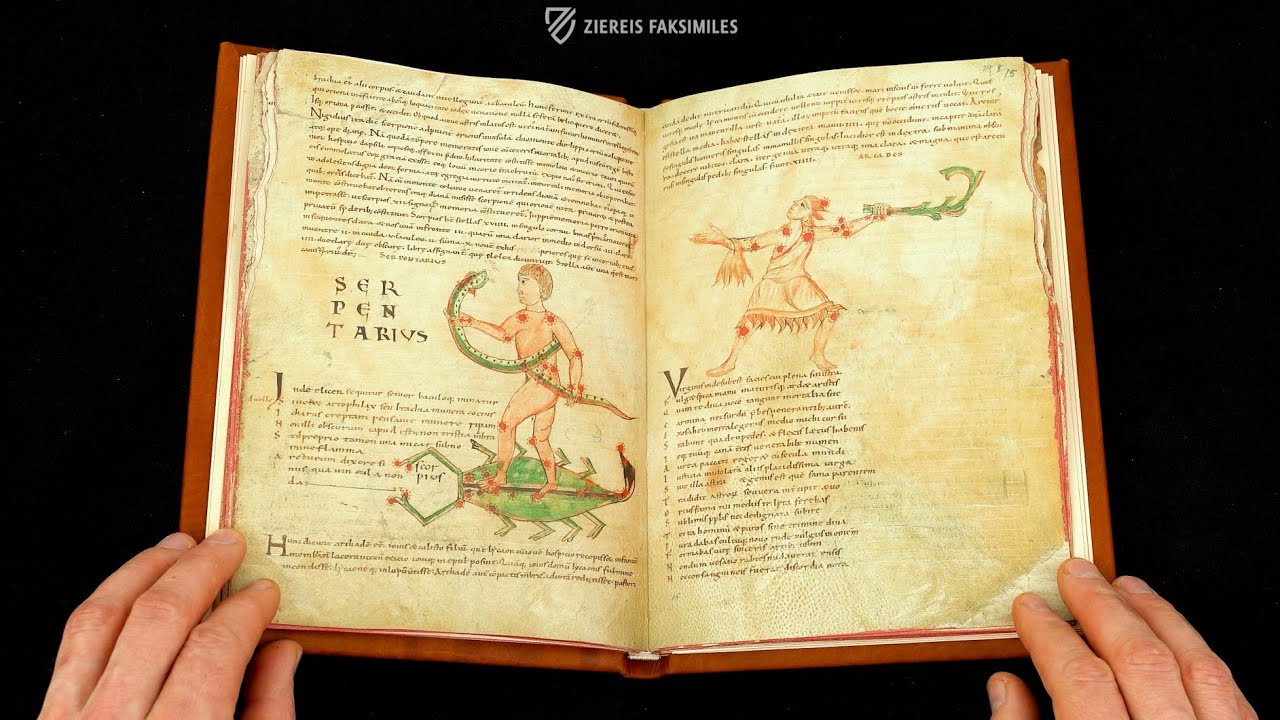 Publisher: Quaternio Verlag Luzern – Lucerne, 2018/2019
Limited Edition: 680 copies
Binding: Decorative brown leather binding with rich blind embossing. Comes in a linen slipcase.
Commentary: 1 volume by Kristin Lippincott, Maredudd ap Huw and Ben Moore
Languages: German and English
1 volume: This facsimile is not complete. Reproduction of the folios 1-26 of the original document as detailed as possible (scope, format, colors). The binding may not correspond to the original or current document binding. The facsimile includes only the first part of the manuscript in the National Library of Wales, which contains the Aratea. The second part, not reproduced here, was probably added to the manuscript 100 years later.
Price Category: €€ (1,000€ - 3,000€)
Edition available
Price: Login here!
Order / Ask a Question
You might also be interested in: 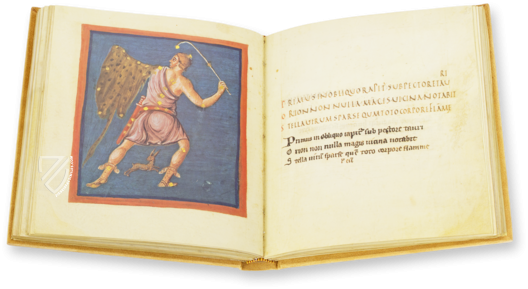 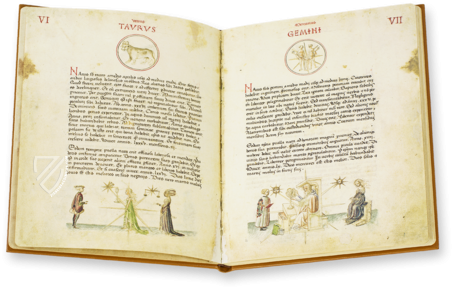 The influence of zodiac signs on people: one of the most famous codices from the rich Biblioteca Estense Universitaria in Modena