This historical atlas from the year 1476 with 5 precious portolan charts is one of three known works by the Italian cartographer Andrea Benincasa. On large, mostly double-paged maps, Benincasa presents a picture of the world around the Mediterranean, Black Sea, and Atlantic. In this way, the exciting world of the sea voyages at the beginning of its heyday is brought back to life over 500 years later!

The 16th century is considered to be the golden age of seafaring and voyages of exploration. Cartographers already began to record the new discoveries on grandiose maps in the centuries before, which were simultaneously practical aids and precious works of art. Andrea Benincasa was one of the cartographers who participated in this development. He came from from a family of cartographers in Italian Ancona and was active in Ancona during the second half of the 15th century.

The Coasts of the Mediterranean, Black Sea, and Atlantic

The 1476 Atlas of Andrea Benincasacontains five maps altogether, two smaller, each on a single-page, and three larger, double-page maps. Sea charts of the eastern and western Mediterranean (from Crete to the Levant, from Gibraltar to Corsica and Sardinia, etc.) and a map of the central Mediterranean from Italy to Crete presents the Mediterranean in full detail. These are augmented by maps showing the coasts of the Black Sea, the Atlantic Ocean (with Great Britain, Denmark, Germany, Holland, Belgium, France, Spain, Portugal, and North America), and an additional map of the coasts and islands in the Atlantic to the Sahara. The last one curiously shows the Antilles, even though the Antilles were first discovered by Christopher Columbus 16 years after the creation of this map.

The geographic content of the maps is not only special, but its high quality design immediately catches the eye. The atlas with five portolan charts probably served as a presentation atlas and as such was extremely detailed and aesthetically pleasing. In addition to the detailed notations and the Latin commentary, other details also catch the eye. Three monarchs are depicted among others in a figurative staffage: the Emperor of the Tartars, the Sultan of Babylon, and the King of Musomelli. Additionally, significant cities such as Jerusalem and Venice and large mountainous regions are schematically illustrated. The 1476 Atlas of Andrea Benincasa, with its well-rounded totality, is considered to be “one of the last great works before the advent of ‘new cartography’ in the Age of Exploration”. 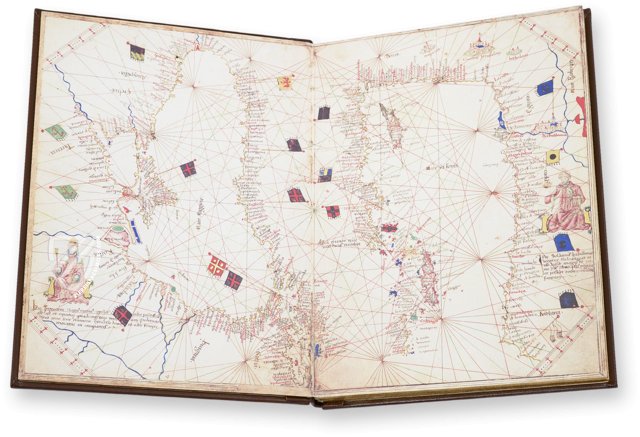 This map is a depiction of the central Mediterranean Sea including Sicily and Southern Italy, the mouth of the Adriatic Sea, the western regions Macedonia and Greece, the island of Crete, as well as detailing various smaller islands which are colored either red or blue. The sheer number of ports labelled in red and black ink makes the map almost illegible and interior geographic features like rivers are represented only schematically in this otherwise highly-detailed portolan chart. 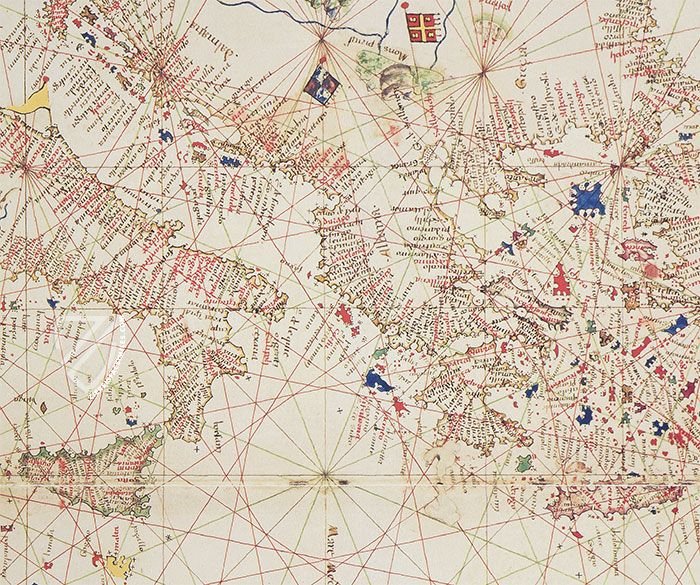 Entangled within a “rhumbline” or windrose network, this east-oriented portolan chart depicts the Western Mediterranean from the Strait of Gibraltar to the westernmost tip of Sicily. The coastlines are traced with a high degree of precision and are crammed with the names of the various settlements found along them, making this map instantly recognizable.

Important cities are artfully depicted here from Rome sitting on the Tiber, to Genoa and its fortified port, to Grenada, which is shown nestled among the Sierra Nevada. Aside from geographic details like mountains and rivers, flags represent various sovereign realms. Behind the mountains of the Barbary Coast, an enthroned emir dressed in green robes is armed with a spear and shield. 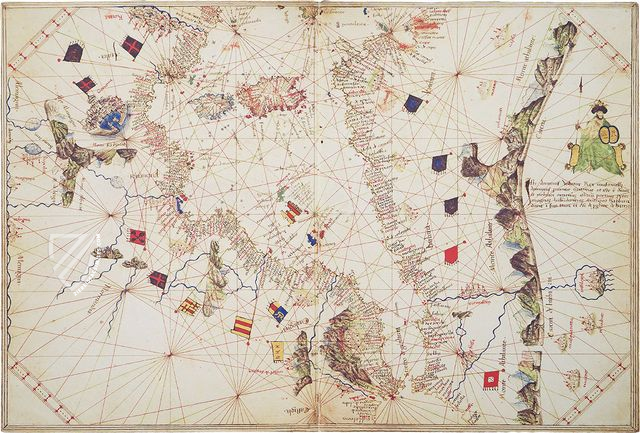 The commentary volume contains an analysis of the atlas and a description of its restoration.
1 volume: Exact reproduction of the original document (extent, color and size) Reproduction of the entire original document as detailed as possible (scope, format, colors). The binding may not correspond to the original or current document binding.
Price Category: €€ (1,000€ - 3,000€)
Edition available
Price: Login here!
Order / Ask a Question
You might also be interested in:

Both historically and artistically valuable: a journey through time to the 16th century with more than 600 fantastic city views