The most important military treatise of the Late Middle Ages presented in the sophisticated style of the Gothic period: the Bellifortis by Konrad Kyeser** (1366 – after 1405). Its contents are a collection of ancient Roman military treatises and the latest designs for weapons of war. Furthermore, the work takes into account the effects of astrology and magic on warfare, making it a truly comprehensive work on the art of war. His work is adorned by illustrations that are exemplary specimens of the Gothic style and even include a realistic portrait of the author, the first of its kind since Late Antiquity.

Konrad Kyeser (1366 – after 1405) was the author of the most important illustrated treatise on military engineering from the Late Middle Ages, which is evident from the fact that at least twelve 15th century copies of the manuscript and ca. 45 altogether survive today. Bellifortis can be translated as "Strong in War" or "War Fortifications" and is concerned with the art of siege warfare in particular. The German military engineer and physician began work on the original manuscript in Prague for King Wenceslaus IV of Bohemia (1361-1419), but after Wenceslaus was deposed in 1400, Kyeser went into exile in his hometown of Eichstätt, during which time he finished the work and dedicated it to the new King Rupert of Germany (1352-1410). The work summarizes material from classical authors like Vegetius and Frontinus while also depicting “cutting edge” military technology but is also heavily impregnated with allusions to astrology and magic.

A Masterpiece Created in Exile

The artwork of the original manuscript indicates that the illuminators were themselves exiles from the royal court of King Wenceslaus in Prague, one of the richest and most sophisticated in Europe and arguably the birthplace of the International Gothic style. As a result, this important treatise on the art of war is illustrated in a manner that is second to none and dedicated to no less than a king. A portrait of Kyeser found in the text is arguably the first realistic depiction of an author since Late Antiquity. The backbone of the work consists of two classical texts: De re militari, a Roman military manual written by Publius Flavius Vegetius Renatus in the late-4th century, and Strategemata, a collection of examples of military stratagems from ancient Greek and Roman history written by Sextus Julius Frontinus (ca. AD 40-103), who served the Emperor Domitian as a general in Germania.

Kyeser believed that warfare was best studied by considering every possible factor, including astrology and sorcery. Thus, magic is presented in the Bellifortis alongside depictions of weapons both old and new: trebuchets, battering rams, movable portable bridges, cannons, rockets, chariots, ships, mills, scaling ladders, incendiary devices, crossbows, and instruments of torture are all depicted in great detail by eminent masters of Gothic art. Alexander the Great in particular is presented as an example of a great general who makes use of various war tactics while also being a military inventor. The famous Macedonian is shown both holding rocket-like weapons in his hands while being credited with the creation of large war carriages and is even portrayed with magical abilities. Nonetheless, Kyeser does not dispense with realistic considerations and expressed his belief that the armies of the Holy Roman Empire would benefit from the enterprising and inventive nature of the German people: "Just as the sky shines with stars, Germany shines forth with liberal disciplines, is embellished with mechanics, and adorned with diverse arts." 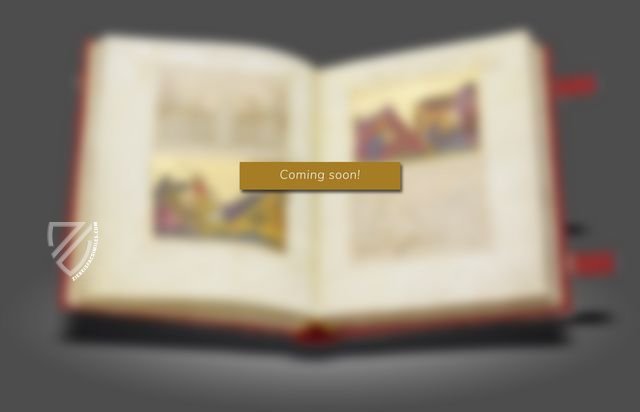 VDI Verlag – Düsseldorf, 1967
Publisher: VDI Verlag – Düsseldorf, 1967
Commentary: 1 volume by Götz Quarg
Language: German
1 volume: Exact reproduction of the original document (extent, color and size) Reproduction of the entire original document as detailed as possible (scope, format, colors). The binding may not correspond to the original or current document binding.
Price Category: € (under 1,000€)
Edition available
Price: Log in here!
Order / Ask a Question
You might also be interested in: 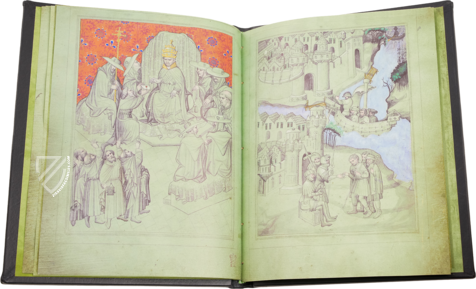 A unique specimen of book history and a testimony to the high Bohemian art of illumination: the famous travelogue of the knight Mandeville illuminated with 28 demi-grisaille miniatures on green dyed parchment