The Civitates Orbis Terrarum is famous for the hundreds of gorgeous cityscapes from around the world contained in its six volumes, which are particularly precious because they present the medieval cities of Europe before the destruction of the Thirty Years’ War. Cologne theologian, geographer, and printer Georg Braun and Flemish engraver Frans Hogenberg collaborated in creating the ambitious project, which has only gained popularity over the centuries.
The masterfully designed and charmingly colored engravings not only depict buildings and their surrounding landscapes, but coats of arms, genre scenes from the everyday life of farmers and fishermen, local customs and costumes, boats, wagons, and more. Instructive and amusing texts written by Braun accompany the images and describe each town’s geographical location, historical development, and economic conditions. It was designed as a way of introducing the world to educated humanists. The volume printed in 1574 is presented here.

This collection of cityscapes across the entire world including Europe, Asian, Africa, and even the New World is considered to be the oldest work of its kind. This enormous six-volume work, also known under the title (in German) Beschreibung und Contrafactur der vornembster Stät der Welt, was edited and created over a period of nearly fifty years between 1572 and 1618. It not only stimulates the mind, but also offers the eye endless enjoyment through the lovely design and artist shaping of the maps. The edition from 1574 contains 139 colored cityscapes that include Siena, Venice, Lyon (labelled Lugdunum), Liège (labelled Leodium), Mexico City, and Cusco, Peru.
The masterful etchings resembling standalone panel paintings were artfully colored along with the staffage and genre scenes that accompany them. The historical importance of this work is also crucial because it provides a systematic mapping of the structures of many medieval cities that were, shortly after the publication of this book, destroyed or severely damaged during the Thirty Years’ War (1618–48) and subsequently renovated in the Baroque style. 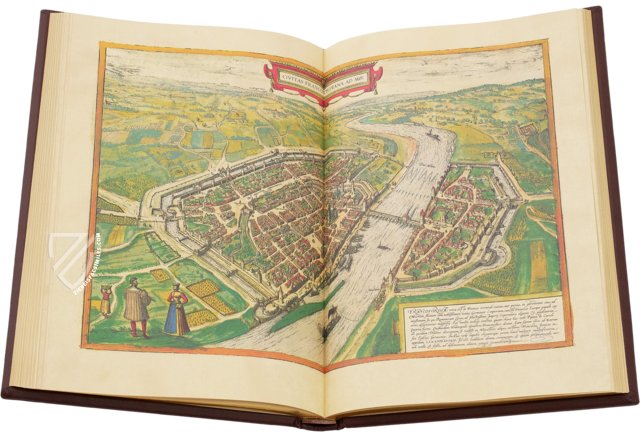 Located on top of a great hill in Tuscany, Siena was one of the most important cities in medieval Europe and a major center of banking until it was surpassed by its rival Florence during the 13th and 14th centuries. The unexpected upside of this is that its medieval center with many towers (like nearby San Gimignano) remained relatively unchanged during the early modern period. Although most of the towers are gone today, the city as it is depicted here remains recognizable to modern travelers who have visited the city with its magnificent cathedral and the famous Piazza del Campo. 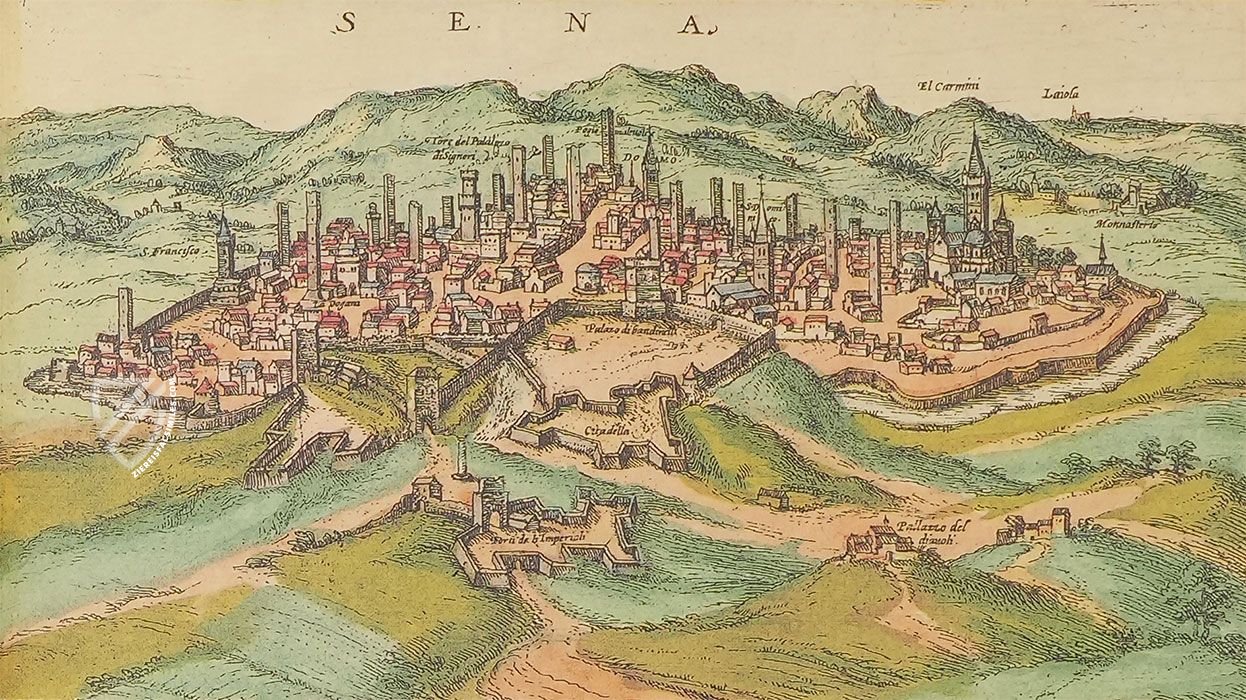 La Serenissima, the “most serene” city of Venice, is presented in an oblique bird’s-eye view from the south in this beautiful and detailed cityscape, in which St. Mark’s Basilica and Campanile can be identified without using the extensive legend in the lower corners. The Venetian Lagoon is filled with ships sailing between the 118 islands that comprise the unique and beautiful metropolis on water.

The Doge of Venice’s procession is depicted at the bottom of the page, the inscription of which reveals that he rarely leaves his palace, but when he does it with a magnificent entourage of councilors, clerics, envoys, trumpeters, and the bearers of arms, flags, and various other insignia. Following two men carrying a throne chair and a cushion, the Doge walks under a golden umbrella. 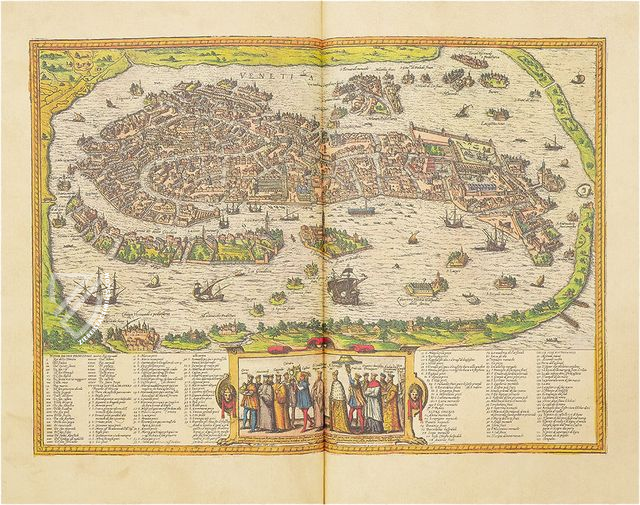 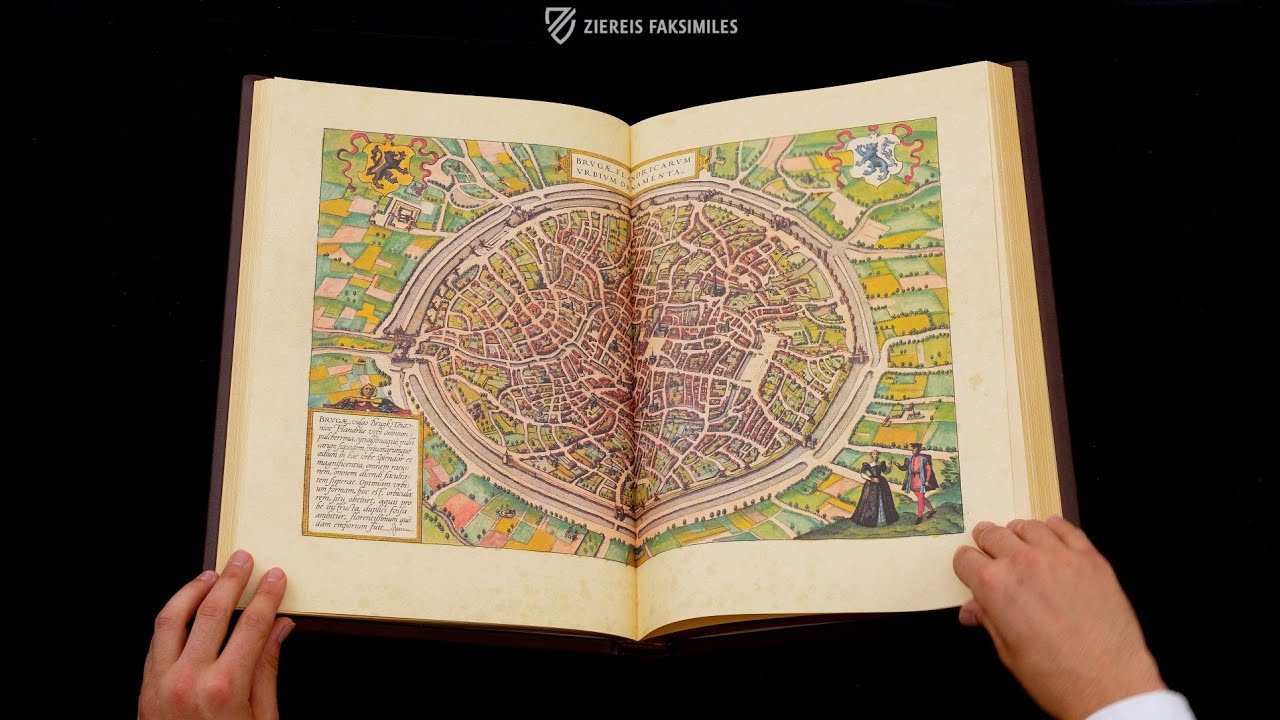