The University Library of Würzburg houses an extremely important piece of church history: the Comes Romanus Wirziburgensis. Also known as the Würzburg Lectionary, the manuscript holds a number of secrets that are of great relevance to the study of the history of the Roman Catholic Church and the Roman liturgical year in particular, and as such, has been the matter of considerable academic research. Both the origin of the manuscript and its date of creation are still disputed today. Moreover, the unusual calendar and the lack of liturgical texts raise questions. However, one thing is certain: These 16 leaves represent one of the most exciting and enigmatic testimonies of early Roman liturgy!

The special significance of the Würzburg Lectionary (Comes Romanus Wirziburgensis) for the understanding of the history and development of the Roman Lectionary has long been recognized. Ever since Germain Morin published the Epistle and Gospel lections of this lectionary at the beginning of the 20th century, considerable scholarly investigation has been devoted to it. The facsimile edition published by the Akademische Druck- u. Verlagsanstalt in Graz in 1968 is an important contribution to further research into this enigmatic lectionary. With an excellent introduction by Dr. Hans Thurn of the University of Würzburg Library and a complete bibliography of the manuscript and text, this edition finally offers an accessible tool for this purpose.
Many questions surrounding the early Lectionary are still unresolved - for example, the purpose of the calendar of the Roman church year, which forms the first section of the manuscript, is still unclear.

The Comes Romanus Wirziburgensis is now in the Library of the University of Würzburg and bears the signature Mp th f 62. It is composed of sixteen leaves written in minuscule hand. Both the place and time of origin of the manuscript are disputed. The contents of the codex can be divided into three sections: At the beginning is a calendar of the Roman church year with Roman stations. It occupies leaves 1r to 2v. The pages each have two or three columns, whose 212 entries are all numbered. No liturgical text is given, only the day. The calendar begins with Christmas and follows the course of the church year, similar to the sacramentaries and lectionaries of the eighth and ninth centuries. The calendar is followed by an Epistle list on folios 2v to 10v and a Gospel list ending with the Vigil of St. Andrew.

Due to the Anglo-Saxon minuscule script, the manuscript was initially located in England. However, other circumstances are also conceivable. For example, it has been suggested that a envoy or companion of Bishop Burkard (683–755), the first bishop of Würzburg, who came from southern England, copied the manuscript on his behalf for the diocese of Würzburg in Rome. The content of the calendar suggests that it was written in the middle of the 8th century, although there are also voices in research that date at least the Gospel list to the second half of the 7th century.
Despite the many unanswered questions, which are not unusual for an early medieval document, the enigmatic lectionary is one of the few surviving testimonies of the early Roman liturgy, which also explains its significance. 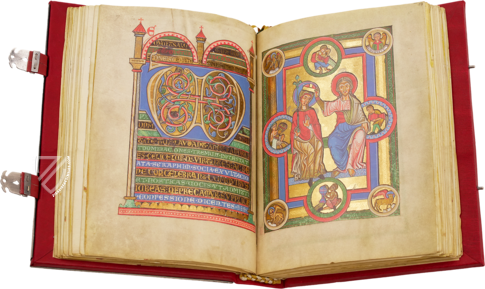 Created in the famous scriptorium of Weingarten, equipped with magnificent miniatures and imaginative decorative initials: one of the most beautiful and imaginative masterpieces of the German Gothic period 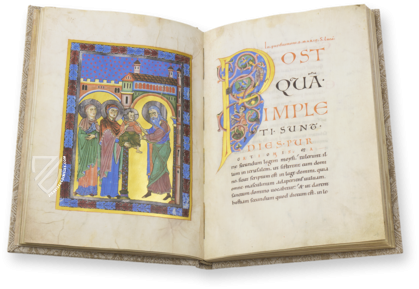 Elements of the Romanesque and Byzantine styles wonderfully combined: a splendid Romanesque work from Passau with large animated initials and brilliant miniatures on luminous gold backgrounds