The purpose of the Passover Seder is to relate and pass down the story of Exodus, the liberation from Egyptian bondage and deliverance into the Promised Land, to the next generation. The biblical verses, Psalms, hymns, and traditions thereof are contained in and read from a Haggadah. A particularly splendid Baroque specimen of this religious manual is the Darmstadt Pesach Haggadah, made in 1769 in Copenhagen, which was both written and artfully decorated by Yehuda Leib ben Eliyya Ha-Cohen. Jewish illuminators have, as a rule, always worked in a very traditional manner. In contrast to his colleagues, Yehuda Leib was primarily concerned with European artistic creation, particularly with the Danish tradition and acquired a new painting style bridging the gap between the Baroque–Rococo and the classical periods.

The Darmstadt Pesach Haggadah, made in 1769 in Copenhagen, was both written and artfully decorated by Yehuda Leib ben Eliyya Ha-Cohen. Its illustrations of the relevant text passages represent ritual, biblical and eschatological aspects of liturgy. The miniatures by Yehuda Leib Ha-Cohen resemble small paintings and illustrate topics from the Pesach-Haggadah with great enthusiasm for details and precision, while also providing an insight into contemporary life.

The Magical Atmosphere of Jewish Illumination

The Pesach Haggadah, Hebrew for “Passover Narration”, provides the liturgical chronology of a Jewish religious meal held before the commencement of the Passover festival. Like the Bible and the Mahzor, it is among the most eminent illustrated Jewish religious manuscripts, since the Torah was never embellished with pictures. During the 18th century, the Pesach-Haggadah was virtually rediscovered by the arts, particularly by Danish artists working predominantly on this subject. The fact that in modern times, long after the invention of print, books – among them Jewish liturgical texts – were still copied by hand and lavishly decorated with the greatest care is hardly known, but impressively documented in this manuscript.

The rise of Jewish communities in Denmark goes back to the 17th century when King Christian IV encouraged Jews to move there for economic and political reasons. One of the larger communities was Copenhagen, with approximately a hundred thousand members. This community offered a cosmopolitan atmosphere and a wide range of cultural and economic activities. The Jewish population in Denmark lived in relative peace and prosperity due to the flourishing economy, which also provided a basis for numerous artistic commissions. Jewish scribes and painters thus discovered a favorite in the Pesach-Haggadah as an object for exquisite decoration.

A Liturgical Book for Passover

The Pesach-Haggadah commemorates the liberation of the people of Israel from servitude in Egypt and the Exodus to the Promised Land, the main intention being to pass on this message of liberation from one generation to the next, as "every person in whatever period they live has the obligation to consider themselves as being part of the great exodus from Egypt". The prospect of final deliverance is drawn from a messianic perspective. Passover begins on the 14th day of the month of Nisan, i.e. on the first full moon in spring, and lasts for eight days. At night, every family has their Passover lamb and unleavened bread (matzah), bitter herbs, and wine. Over the years, a fixed order (Seder) was established for this religious meal, according to which the liturgy was held. The basic form of this order is about a thousand years old. It was later compiled in a small book called Pesach-Haggadah. This book comprises biblical verses, hymns and Psalms, and records of religious customs. The head of the family reads it on the first and second evenings of Passover. As this happens during the ceremony and the meal, most manuscripts show marks of use, such as stains of wine.

The scribe and painter Yehuda Leib Ha-Cohen was born in Lissa, Poland. We know of two Haggadot that he produced in Denmark, the Darmstadt Codex from the year 1769 and a second one from 1779. Jewish illuminators have, as a rule, always worked in a very traditional manner. In contrast to his colleagues, Yehuda Leib was primarily concerned with European artistic creation, particularly with the Danish tradition and acquired a new painting style bridging the gap between the Baroque–Rococo and the classical periods. He was clearly inspired by other works, such as the Icones Biblicae by Matthäus Merian and the Haggadot of Amsterdam. He was also influenced by the etchings of Daniel Nikolaus Chodowiecki. Leib’s landscapes remind us of pictures from the French classical period and his architecture of the Baroque buildings in Copenhagen, while his interior scenes are conversation pieces typical of the Rococo. His nuances in effects of light and shade conjure up a magical atmosphere. In spite of his having been influenced by other artists, Leib developed an innovative style of his own, which makes his pictures truly unique. 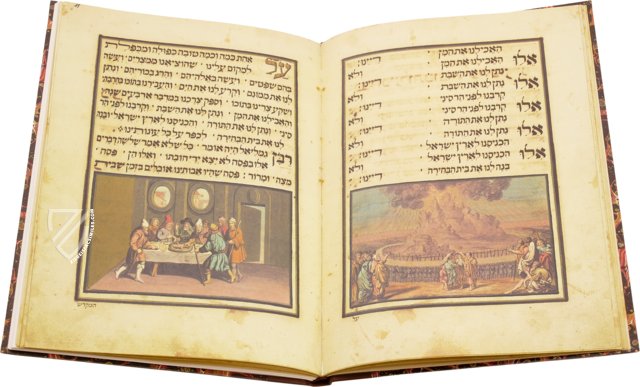 After the destruction of the Second Temple, Judaism was reconstructed with Torah study at its center. While living under Roman rule during the 2nd century, Rabbi Eliezer, Rabbi Joshua, Rabbi Elazar the son of Azariah, Rabbi Akibah, and Rabbi Tarfon stayed up all night in the town of B'ney B'rak near Tel Aviv discussing the story of Passover, even though doing so was punishable by death. Oblivious to the dawn, their students roused them saying, “Rabbis, it is time for the morning Shema!" 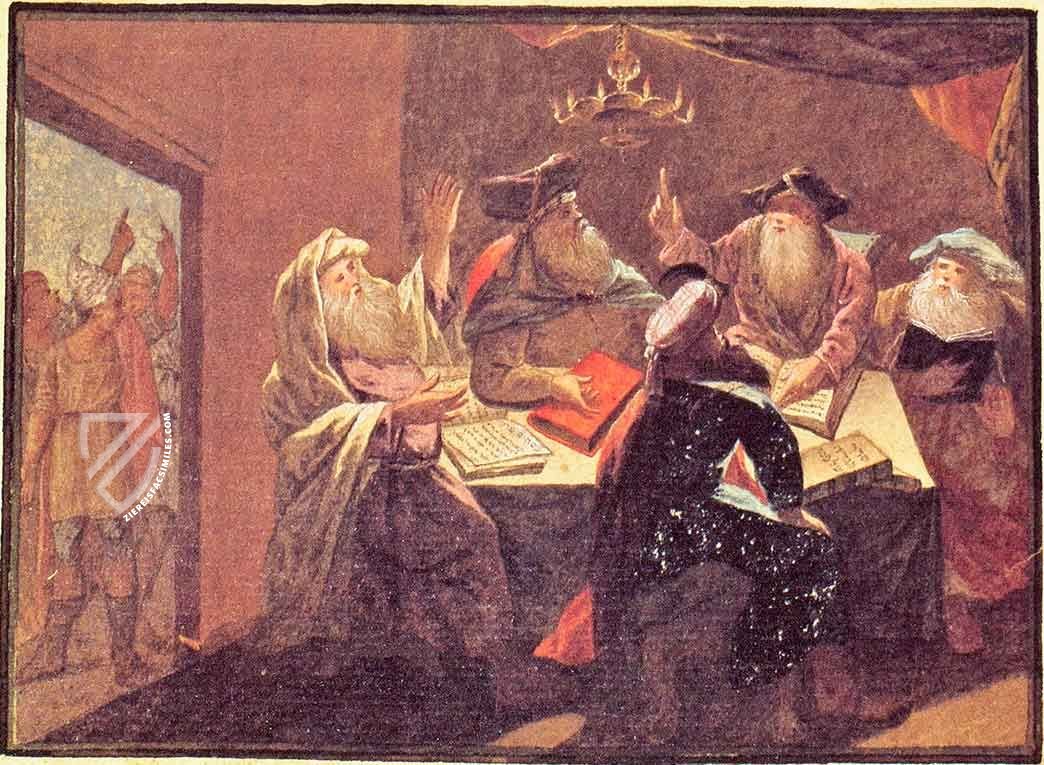 In the traditional Haggadah text, there are four sons who ask four questions about the Seder. The “wise son”, depicted on the right as a scholar, tries to truly understand the ritual so he can perform it one day. To his left is the “wicked son”, garishly dressed as a soldier, a common way of depicting the son who represents those who have become isolated from Judaism.

The “simple son” is dressed in black with sagging socks, a floppy hat with a white feather, and a walking stick, but is immediately identifiable by the idiotic look on his face. On the far left, the “son who does not know to ask is depicted” as a blond, pink-cheeked child dressed in a green coat. He looks out at the beholder as he plays innocently with his toy, unable to pay attention. 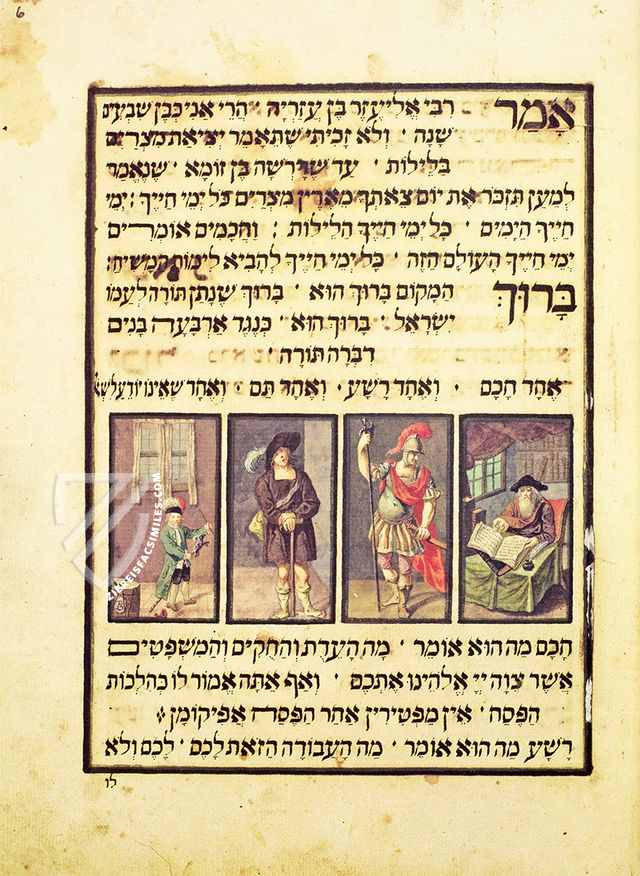 The scholarly commentary by Ulf Haxen is in English and provides an introduction to the historic background of the manuscript. It also explains the significance of the author and painter of the manuscript for the history of art, describing every single page separately.
1 volume: Exact reproduction of the original document (extent, color and size) Reproduction of the entire original document as detailed as possible (scope, format, colors). The binding may not correspond to the original or current document binding.
Price Category: € (under 1,000€)
Edition available
Price: Login here!
Order / Ask a Question
You might also be interested in: 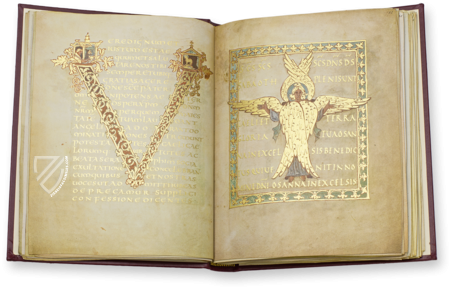 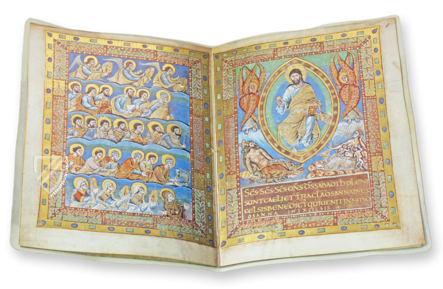 A fragment and yet a complete masterpiece: a special jewel of Carolingian book art furnished with magnificent decorative pages