Already hailed as the Praeceptor Germaniae in his own time, Hrabanus Maurus was a Frankish monk, Bishop of Mainz, and a prolific author of the Carolingian Renaissance. One of his most popular works is the Liber de laudibus sanctae Crucis, a series of sophisticated "picture poems" in the style of the great Alcuin. Originally written ca. 810-14, the 28 picture poems are sort of like biblical word-jumbles containing individual letters and groups of letters which compose self-contained poems or sequences of words referring to the basic concept of the composition, the glorification of the Cross. The Vatican Library houses a specimen that is arguably the finest and originated in Fulda Monastery ca. 825/826.

Hrabanus Maurus (ca. 780–856), a monk from Fulda who eventually became Bishop of Mainz, achieved great fame for his work Liber de laudibus sanctae Crucis, which was widely-distributed throughout the Carolingian Empire. It contains a series of 28 picture poems taken from the first version of the treatise on the Holy Cross written by Hrabanus as early as 810–14. In fact, some 80 manuscripts of the work survive, many of them made during the lifetime of Hrabanus in the monastery of Fulda. The finest and most artful of these originates from ca. 825/826 is stored today in the Biblioteca Apostolica Vaticana under the shelf mark Reg. Lat. 124 and even features black- and purple-dyed pages.

Hrabanus, praised at his time as the praeceptor Germaniae, wrote this book in the literary form of picture poems as was formerly practiced in Tours by Alcuin, his famous teacher. Hrabanus raised this literary genre to a new peak, referring less to recent Carolingian models than to the classical source of this form. The text, inscribed on a grid-like system, is presented in a square frame in the manner of a picture. From this text box emerge individual letters and groups of letters which compose self-contained poems or sequences of words referring to the basic concept of the composition, the glorification of the Cross.

This copy may have been originally intended for Haistulf (825) the Archbishop of Mainz but was dedicated to his successor Otgar (d. 847) after his death. It remained in the Mainz Cathedral Library before returning to Fulda Monastery at an unknown time. A letter dated June 15th, 1598 indicates that the manuscript was borrowed from Fulda by Emperor Rudolf II (1552-1612), who had it brought to his court in Prague where the manuscript was copied. It was then captured by the Swedes in the course of the Thirty Years’ War (1618-48). It came into the possession of Queen Christina of Sweden (1626-89), who succeeded her father Gustavus Adolphus (1594-1632) after his death in the Battle of Lützen when she was only 18 years old. Christina created a scandal when she announced her intention never to marry, then abdicated her throne, converted to Catholicism, and moved to Rome where she became a celebrity patron of the arts. Her library, including the Hrabanus manuscript, was bequeathed to Pope Innocent XI (1611-89) upon her death and thus came into the possession of the Vatican.

Rooted in classical traditions of patronage, presentation miniatures were an important feature of Late-Carolingian and Ottonian manuscripts that provide important and often unique portraits of various emperors, kings, popes, abbots, and important clerics from this period. Depicted as balding with a little patch of hair on his forehead, Pope Gregory IV is shown enthroned and graciously receiving the manuscript at hand from Hrabanus Maurus, pictured on the right. 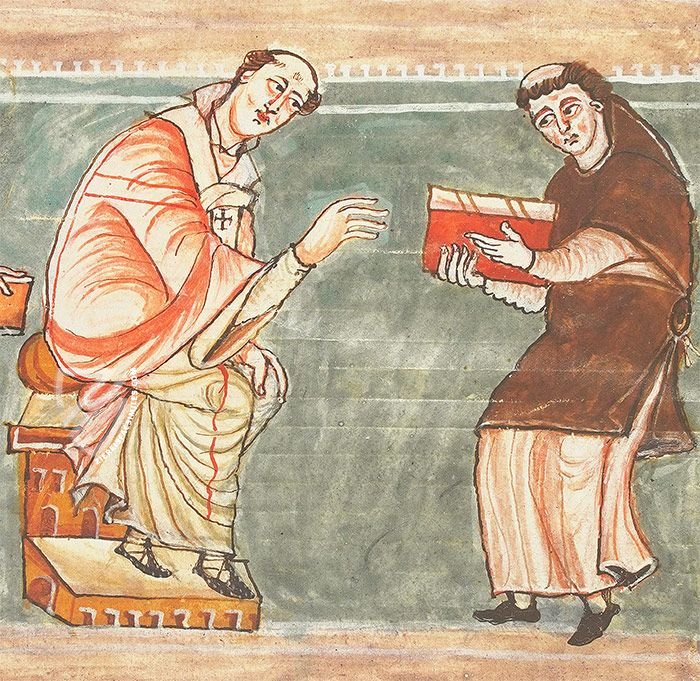 Calligram of Louis the Pious

This fine Carolingian work was created while the First Iconoclasm occurred in the Byzantine Empire and there was a similar discussion about religious imagery among the Franks. It is filled with picture poems concerning the veneration of the cross like this image presenting the Emperor Louis the Pious (778–840) in the form of a milites Christi or “Soldier of Christ”.

The text of this figure poem is inscribed in a grid pattern, which contains self-contained poems or sequences of words glorifying the cross as a symbol of salvation. Louis is presented in the garb of a Roman soldier with an oval shield from Late Antiquity. The New Testament is filled with references to the Imperial Roman army emphasizing courage, loyalty, and dedication among Christians. 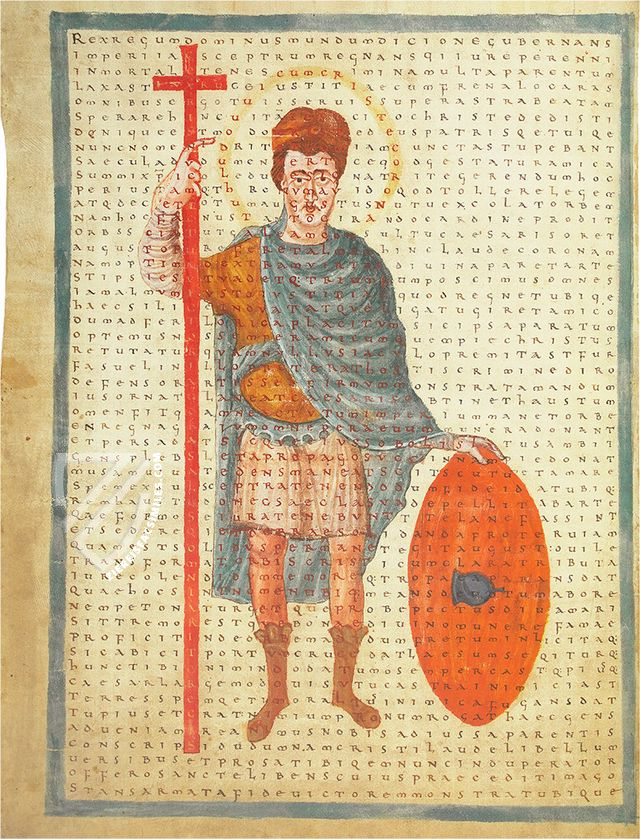 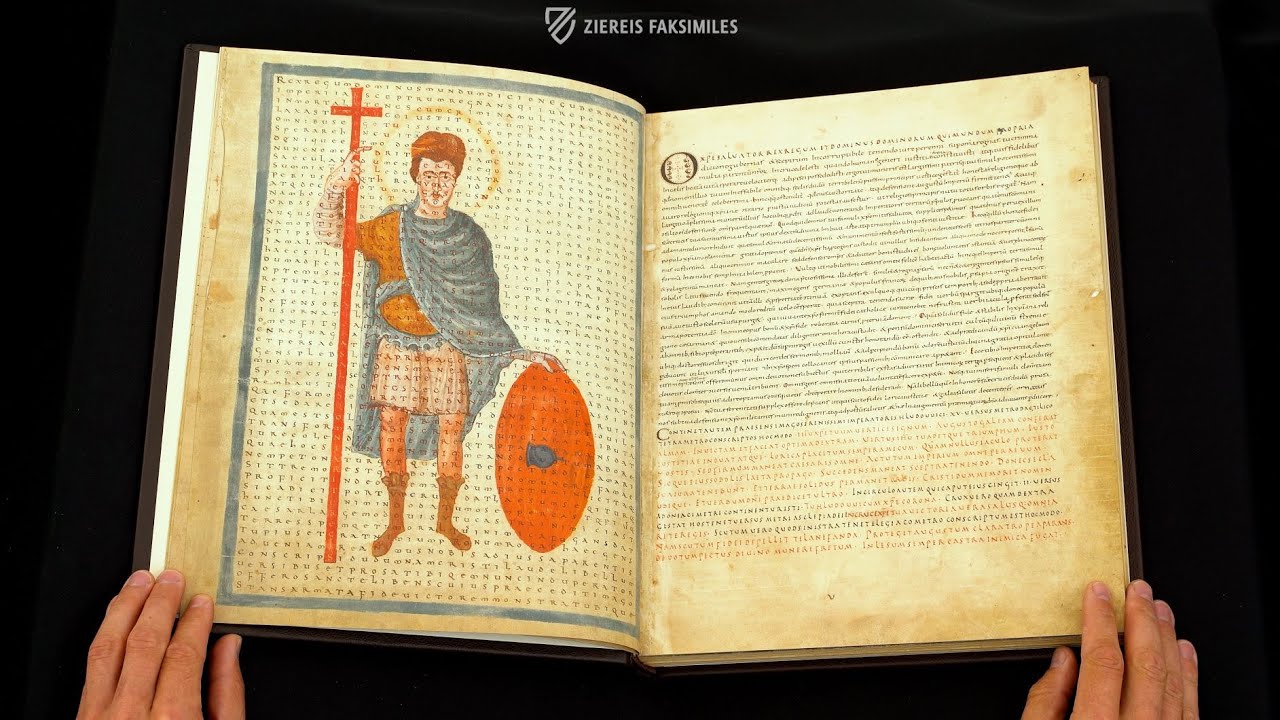 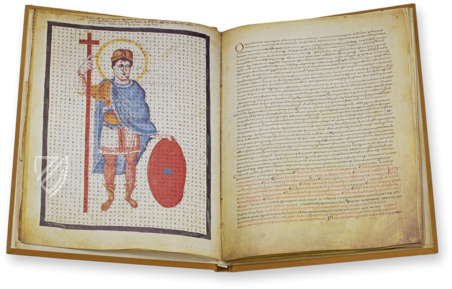