Adorned by 16 magnificent full-page miniatures, the Epistolary of Giovanni da Gaibana is one of the finest examples of 13th century Italian illumination, which was still heavily influenced by Byzantine art. This style was further developed and refined by Gaibana and his workshop to create the so-called “Gaibanesque style”, which spread and influenced artists in other parts of Europe, Austria in particular. Stylistically, the masterful miniatures of the manuscript are most similar to the mosaics of prophets and Christ Emmanuel in the nave of St. Mark's Basilica in Venice. The manuscript is also useful to art historians because its origins are well documented: it was created in Padua in 1259 and Gaibana identifies himself as the scribe in the colophon.

This splendid specimen of the Italo-Byzantine tradition of Gothic illumination in Italy represents one of the few manuscripts for which we have a precise information about its origins. It originated from Padua, which was emerging as a leading center of manuscript production, in 1259 and has a colophon signed by Giovanni da Gaibana on ff. 98v–99r, a clerical assistant at Padua Cathedral. Gaibana copied the texts for this epistolary from the Old and New Testaments and possibly participated in the illumination of the work. It is considered to be one of the finest examples of the lasting Byzantine tradition in Italian art.

Byzantine art was enormously influential in Italy, especially in the Veneto and Southern Italy, which had long been within Constantinople’s circle of influence. Up until the end of the 13th century, Italian artists attempted to imitate the icon painting of the Byzantines, who maintained a remarkably refined artistic tradition reaching back to Late Antiquity. The Italo-Byzantine style was not only adopted but further developed by the workshop of Giovanni da Gaibana in what became known as the Gaibanesque style. It is distinguished by the stylized depiction of figures with small, fine noses in the early Palaiologan style, flowering trees, and three-dimensional initials combining strapwork with flowers and dragons.

The 16 full-page miniatures that adorn this epistolary are distinctly influenced by Byzantine painting, especially with respect to the figures, their garment fall of folds and facial expressions as well as the rich opaque color palette and employment of burnished gold backgrounds. Their figures are most similar to the mosaics of prophets and Christ Emmanuel in the nave of St. Mark's Basilica in Venice, which is not far from Padua, where the manuscript was created. The artists who created this and other illuminated manuscripts, panel paintings, wall paintings, and rock-crystal enamels until about 1295 are sometimes grouped together by art historians as the Paduan school. However, most the works of art they created originated north of the Alps, many in Salzburg, as these highly skilled and sought-after artists found employment outside of Italy and influenced other artists, particularly in Austria.

Commentary: 1 volume by Claudio Bellinati and Sergio Bettini
Language: Italian
1 volume: Exact reproduction of the original document (extent, color and size) Reproduction of the entire original document as detailed as possible (scope, format, colors). The binding may not correspond to the original or current document binding.
Price Category: € (under 1,000€)
Edition available
Price: Log in here!
Order / Ask a Question
You might also be interested in: 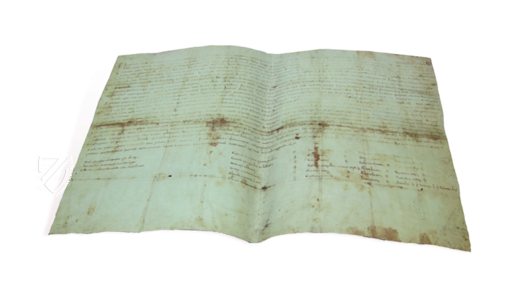 Written July 19, 1074 and first rediscovered in 1596: one of the few personal documents of the Spanish knight and national hero