The Madrid Codices are a two-volume collection of pages, notes, sketches, and drawings by the Italian Renaissance artist Leonardo da Vinci. The works originated between 1490 and 1505. The precious manuscripts show some sketches and designs, which significantly influenced the architecture and technology of our time.

“Read me, reader, if it pleases you, for I rarely return to this world.” With this sentence ends the first volume of the so-called Madrid Codices by Leonardo da Vinci. The greatest artist and scholar of the Renaissance composed two codices, which treated the entire spectrum of his interests. The manuscripts concerned themselves with painting, geography, mechanics, mathematics, geometry, weapons technology, and architecture. The first volume of the manuscript contains 384 pages and the second 316 pages. The pages show a number of notes, sketches, and drawings by the great Renaissance artist.

A Treasure of the Spanish National Library

Both manuscripts by Da Vinci get their name from the location where they are housed today. After Da Vinci’s death, his student Francesco Melzi inherited the valuable document. This he in turn left to his son Orazio, who sold it to the wealthy sculptor Pompeo Leoni ca. 1590. The path of the volumes into the possession of the Biblioteca Nacional in Madrid is still unclear. Although it was known since the 19th century that the codices were in Madrid, they remained undiscoverable until the end of the 1960’s. The American Professor of Romance Studies, Jules Piccus, uncovered both of the precious manuscripts by a lucky coincidence while conducting literary research in the Spanish National Library in February of 1967.

A Glimpse into the Conceptual World of Da Vinci

The first Madrid Codex is dated in the time period from 1490–99, the second from ca. 1503-05. Leonardo composed the text in his characteristic mirror writing and was furnished with numerous depictions and sketches. Found among these is also the design of the bridge for the crossing of the Golden Horn, a bay at the Bosporus in Turkey. In the Norwegian locality of Ås, the Leonardo-Da-Vinci-Bridge was erected in the year 2001 as a footbridge. Another drawing shows the draft of a gearbox. The engineer and Da Vinci expert Roberto Guatelli presumes that is a detailed design of a counting mechanism. Therefore, it is probably dealing with the first calculator in world history. 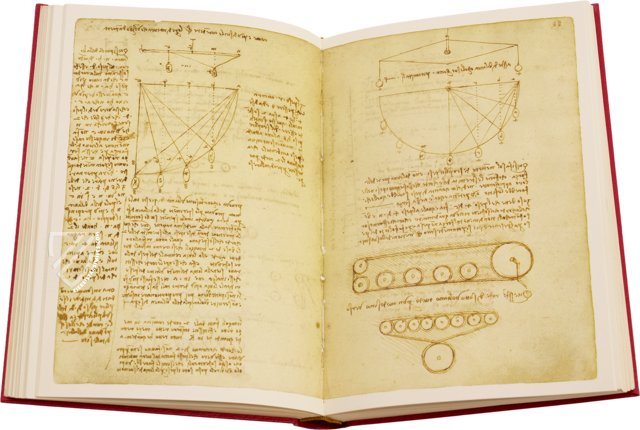 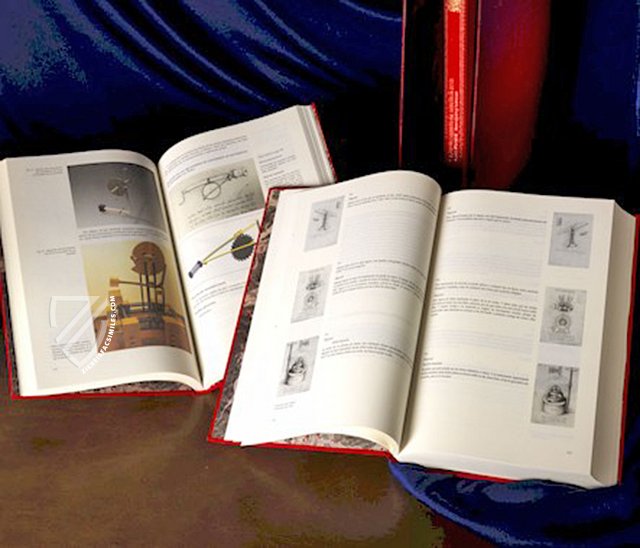 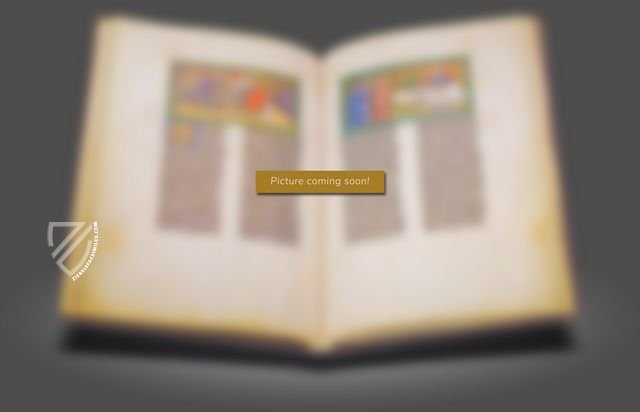 The modern drum brake was first used in a car manufactured by Maybach in 1900, but Leonardo da Vinci already conceived of the design 500 years earlier. Appearing on a page dedicated to various kinetic devices using gears and change, these drawings were concerned with how to efficiently counter kinetic energy in a wagon wheel. In his own words, Leonardo envisioned a “spring that tightens equally and slackens equally. And it shall be tempered in the most perfect circle possible.” Although manufacturing such a device to consistent standards was nearly impossible before the Industrial Revolution, it already existed theoretically during the Renaissance – at least in Leonardo’s brilliant mind. 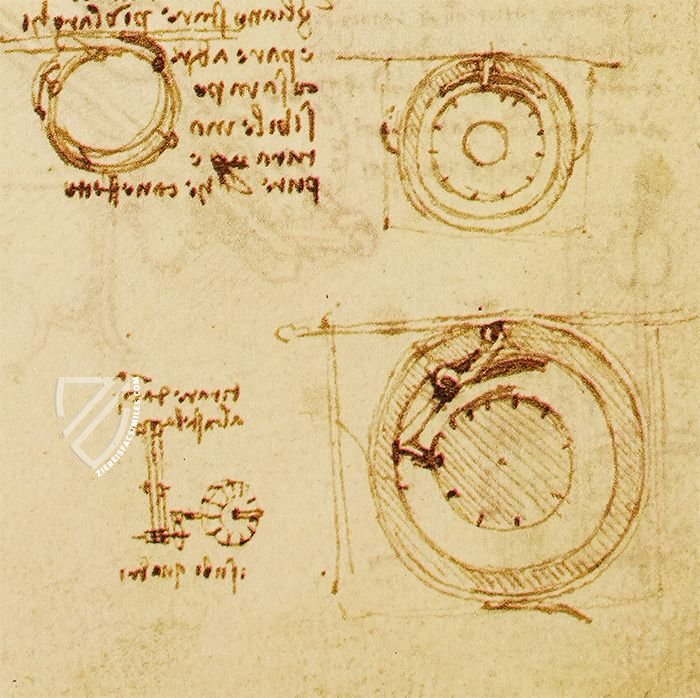 These two diagrams show devices that use a continuous rotary motion to produce a reciprocal linear motion, i.e. up-and-down or left-and-right. Above, an oscillating mechanism swings in one direction and then the other to engage with the pin bar on one side. Below two half-wheels turning in opposite directions engage two sets of pins on either side of the bar to create the back-and-forth motion.

A passage in mirror writing from da Vinci’s own hand, which appears at the top of the page, reads: “Each body requires its members and each art, its instruments. And as soon as the whole is created, its parts are also created.” Indeed, these mechanisms required the pins of the rotating wheel to seamlessly interlock with and disengage from those of the rack, which would require the precise and uniform manufacture of parts. 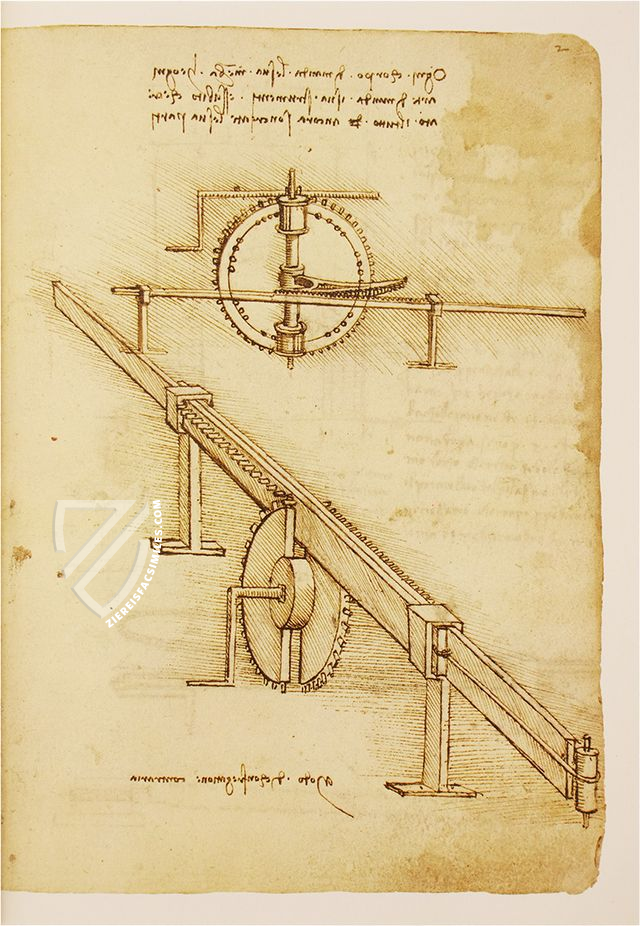 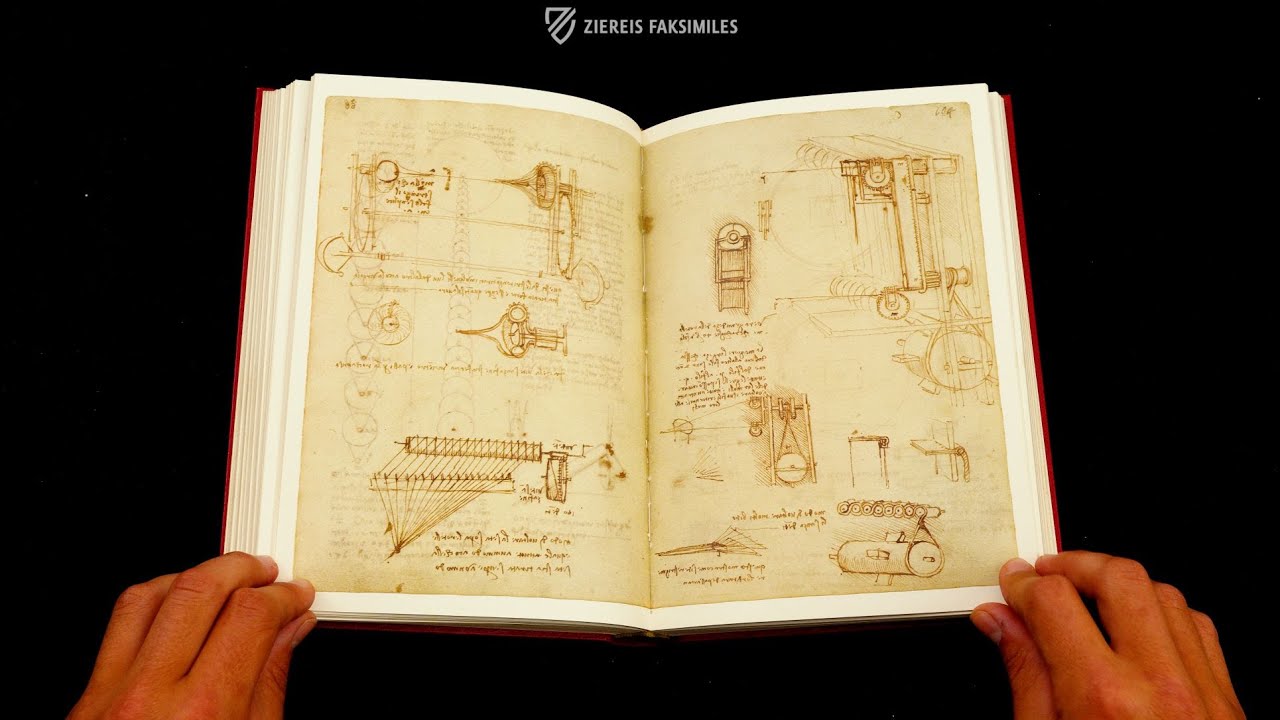 McGraw-Hill – New York, 1974
Publisher: McGraw-Hill – New York, 1974
Limited Edition: 1000 copies
Binding: Handbound in red leather with gold tooling. A leather-covered slipcase with gold tooling on the spine houses all five volumes.
Commentary: 3 volumes by Ladislao Reti
Language: Italian
2 volumes: Exact reproduction of the original document (extent, color and size) Reproduction of the entire original document as detailed as possible (scope, format, colors). The binding may not correspond to the original or current document binding. Pages presented on a larger white background.
Price Category: € (under 1,000€)
Edition available
Price: Log in here!
Order / Ask a Question
You might also be interested in: