The situation in 14th-century Italy is not very promising: the country is torn apart, the pope is in Babylonian exile in faraway Avignon, and Roman-German kings often stake their claim to the land. Could Robert of Anjou (1278-1343), the king of Naples, be the man to turn everything around? The author of the present panegyric is firmly convinced: Robert is the only one, he is effusively praised as the one who can unite Italy and save the Church. The dignity and importance of this statement is supported by the unusual format (48.5 x 34.4 cm) and the 43 monumental miniatures, which cleverly invite the viewer to an almost intimate dialogue. Politically and militarily, Robert was not as successful as the eulogy might lead one to believe, but he bears the epithet Il Saggio, “the Wise”: he generously patronized Giotto di Bondone, Francesco Petrarch, and Giovanni Boccaccio.

Poem of Praise for Robert of Anjou

The Poem of Praise for Robert of Anjou, King of Naples (1278–1343) is in the safe keeping of the Austrian National Library and is one of the most important documentations concerning the medieval conception of good government and at the same time also one of the most outstanding examples of illumination from the 14th century.

Decor Worthy of a King

This extraordinary codex was illustrated by 43 large-format miniatures, richly endowed with engraved gold and silver, on 72 pages altogether. The partially full-page miniatures make an impression with their monumental format of handwriting (48.5 x 34.4 cm); 29 Florentine initials and 8 opaque initials on a gold background complement this fantastic layout. A kaleidoscope of almost the entire medieval/early-modern educational canon is covered. Thus, the manuscript is a testimony to the extravagant intellectual and artistic effort which was expended for the sake of depicting the Kingdom of Robert of Anjou. Some of the handwriting also indicates that Robert himself commissioned production of the manuscript.

The Poem of Praise for King Robert of Anjou portrays the King as the ideal ruler, who is alone able to keep Italy under rule. This was a period of time during which Italy is torn apart: Robert shall, as the future ruler, bring the affairs of Italy in order. The author laments that Italy does not have a king like other states; likewise he denounces the absence of the Popes of Rome during their “Babylonian” exile in Avignon (1309–1376).

A Splendiferous Kaleidoscope of the 14th Century

The codex contains two richly illustrated parts. The more extensive first section covers the Poem of Praise (regia carmina) for King Robert of Anjou, which is a praise of the ruler and in usual fashion it represents an effusive poem, which celebrates the addressee as the rescuer of the church and the ideal king of all Italy.

The miniatures represent the “ideal” government state of Robert: allegories of Italy and the Italian city-states as well as virtues, which praise the King as an ideal ruler. The Italia (the female personification of Italy) or mythological characters from antiquity come before the throne of Robert praying for their country. The King sees himself as the chosen one, ordained by God to fulfill the task of uniting all of Italy. Accordingly, the holy court of God is compared to his own in several splendid miniatures. 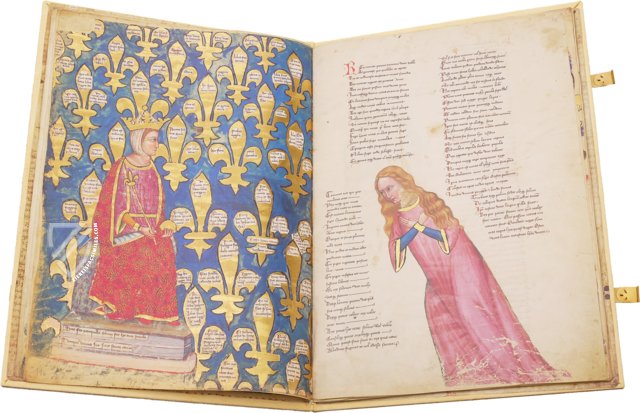 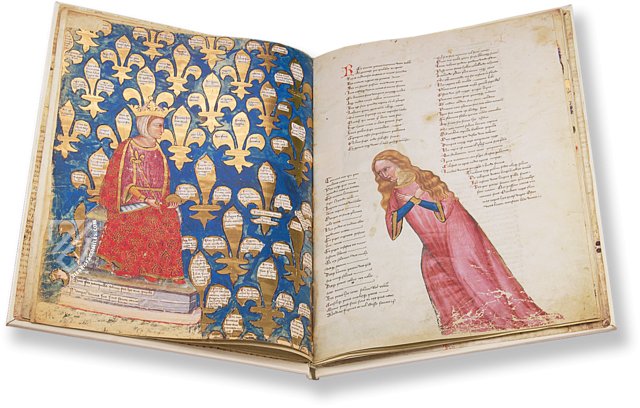 The Judgement of Paris

Styled as a medieval feast, this ancient story is central to both the Trojan War as well as the mythological foundations of Rome. It is included in this work as an allusion to King Robert’s ambition to unite all of Italy under his banner. Paris is shown kneeling before the goddesses Hera, Athena, and Aphrodite, all of whom tower over the mortal. Aphrodite is shown accepting the apple from him gracefully, but the displeasure of the other two goddesses is clearly written on their stern faces. 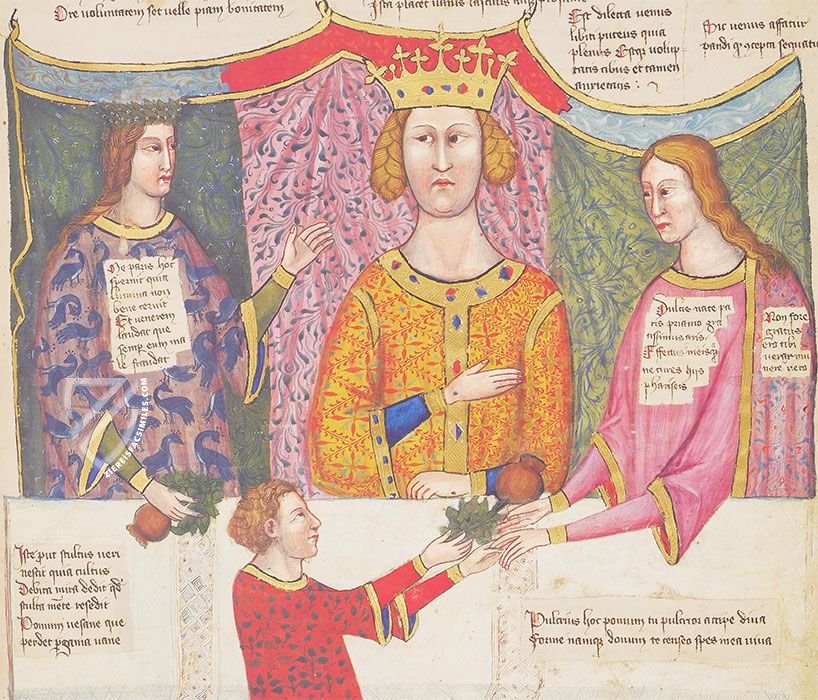 Poem of Praise for Robert of Anjou

This double-page at the beginning of the manuscript establishes the purpose of the text – to promote Robert of Anjou, King of Naples, as the savior of Italy. On the recto page, we see the image of a beautiful but sorrowful female figure dressed in pink with dark blue sleeves and accents with gold leaf. She is the personification of Italy, which cries out for a strong leader to unite it.

Robert is depicted in profile on the verso page seated on a bench throne holding an orb in one hand and a scepter topped with a fleur-de-lys in the other. His beautifully patterned robes, trimmed with gold, are contrasted by the lapis lazuli background depicted with a pattern of golden fleur-de-lys, which are inscribed with his numerous virtues. 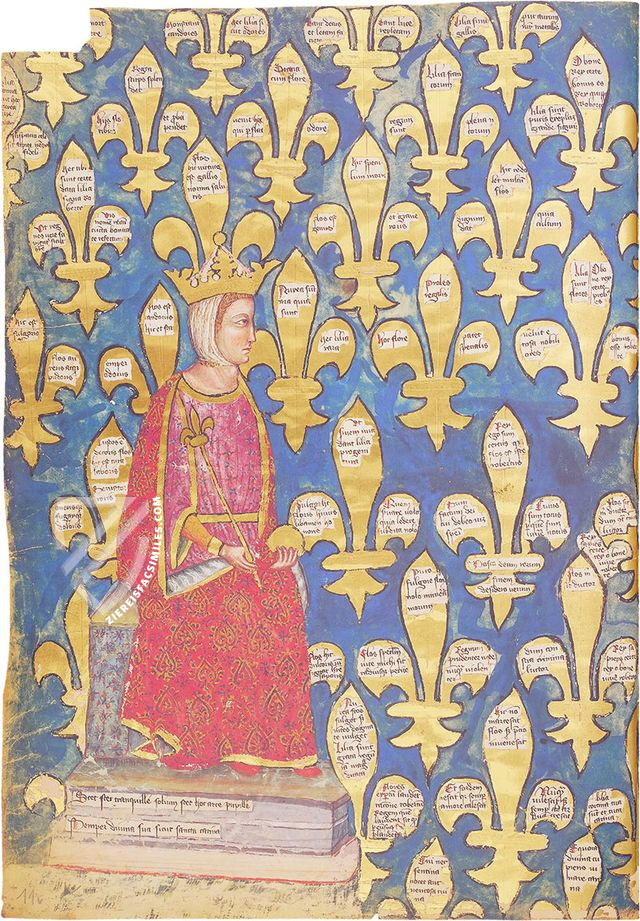 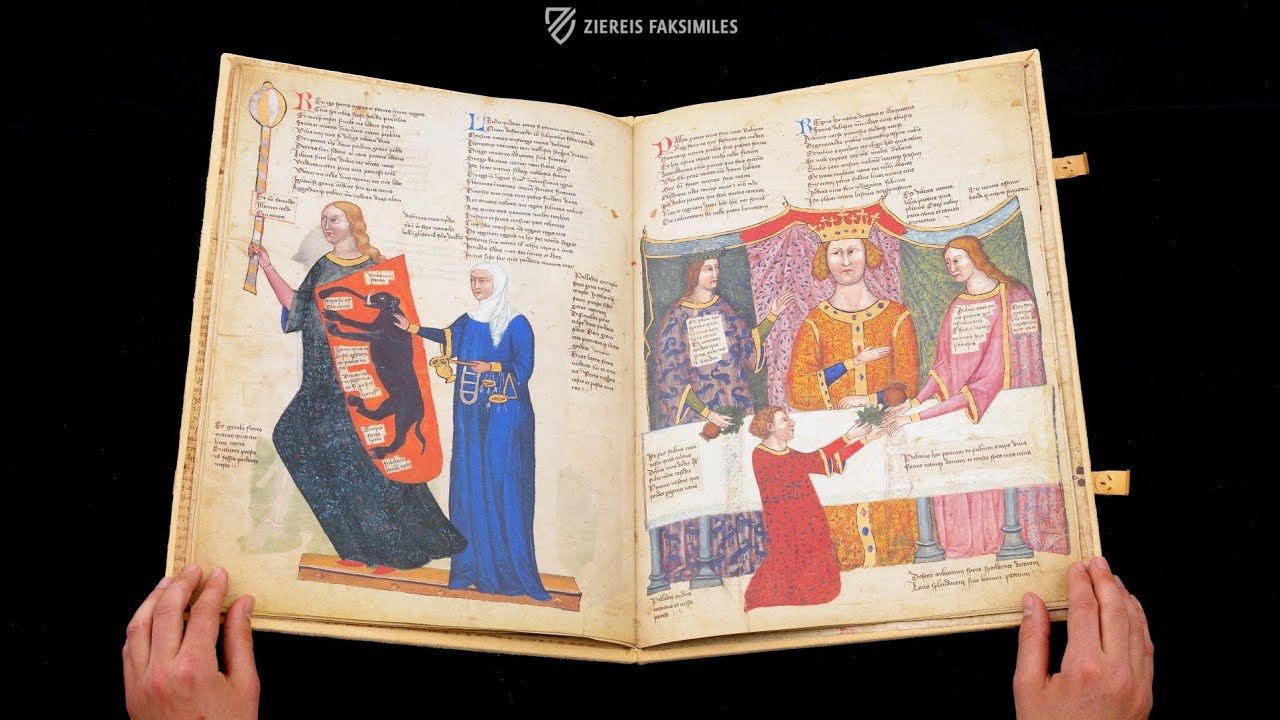 Publisher: Akademische Druck- u. Verlagsanstalt (ADEVA) – Graz, 2008
Limited Edition: 80 copies
Binding: The Luxury Edition – limited to only 80 copies worldwide – is protected by a cover made of deer leather. Four golden fleurs-de-lys – the sign of the Anjou family – adorn the front cover with the golden emblem of the Anjou family in the center. The faithful reproduction of the clasps complements the magnificent décor of the deluxe edition. Facsimile is presented in a blue velour case.
Commentary: 1 volume by Karl-Georg Pfändtner
Language: German
1 volume: Exact reproduction of the original document (extent, color and size) Reproduction of the entire original document as detailed as possible (scope, format, colors). The binding may not correspond to the original or current document binding. All folios are cut according to the original.
Price Category: €€€ (3,000€ - 7,000€)
Edition available
Price: Login here!
Order / Ask a Question 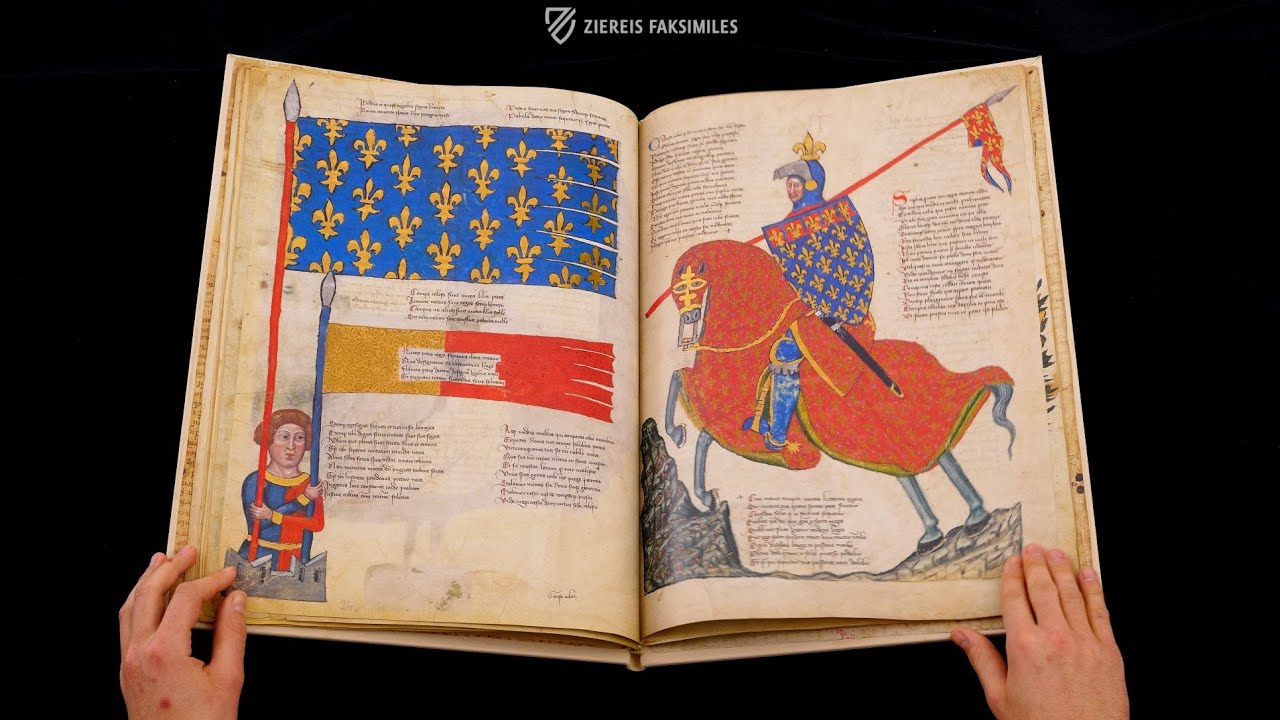 Publisher: Akademische Druck- u. Verlagsanstalt (ADEVA) – Graz, 2008
Limited Edition: 300 copies
Binding: The leather edition is protected by a handmade full leather binding of smooth light leather and bears the embossed pattern taken from the original. The leather edition comes with the commentary volume in a linen slipcase.
Commentary: 1 volume by Karl-Georg Pfändtner
Language: German
1 volume: Exact reproduction of the original document (extent, color and size) Reproduction of the entire original document as detailed as possible (scope, format, colors). The binding may not correspond to the original or current document binding. All folios are cut according to the original.
Regular price without login (like new)1,980 €
Log in for a Better Price!
Order / Ask a Question
You might also be interested in: