A fascinating witness to a time when the Italian Peninsula was divided among territories loyal to the Lombards, Byzantines, and the Papacy: the Historia Langobardorum, written by Paul the Deacon (720’s–799) a Benedictine monk, scribe, and historian from the Kingdom of the Lombards. The text traces the history of the Lombards from their mythical origins in southern Scandinavia to the kingdom they conquered in Italy before their kingdom was in turn conquered by the Emperor Charlemagne (742–814). The specimen at hand represent one of the oldest surviving manuscripts of this tradition, the Codice Cividalese of the Museo Archeologico Nazionale in Cividale del Friuli, birthplace of Paul the Deacon, which originated between 825 and 850. Paul the Deacon’s text represents one of the most important and popular sources on the Early Middle Ages.

The History of the Lombards traces the deeds of this Germanic people from their origins to the kingdom they established, which ruled over most of the Italian Peninsula from 568 to 774. The northern Italian region of Lombardy is thus named because it was the heart of their erstwhile kingdom. The history consists of six books and was written by Paul the Deacon (720’s–799) a Benedictine monk, scribe, and historian from the Kingdom of the Lombards. The original manuscript, written sometime between 787 and 796, is now lost, but at least 115 manuscripts of the work have survived and translations exist in English, German, French, Polish, Spanish, Swedish, Italian, Aragonese, and Croatian. The reason for the popularity of the Historia Langobardorum is its value as a testament not only to the emerging conflict with the Franks, but to the state of relations in 8th century Italy, which was then divided between lands controlled by the Lombards, Papacy, and Byzantine Empire.

The Lombards’ Journey to Italy

According to legend, the Lombards originated from southern Scandinavia, coming to northwestern Germania in the 1st century AD before migrating to the area of modern Austria and Slovakia by the 5th century. In the 6th century, they invaded Italy, which had been devastated and depopulated by endemic wars between the Goths and Byzantines, and brought all of northern Italy under their rule by 572 before moving south, conquering everything save for some coastal cities who remained part of the Byzantine Empire. At the instigation of Pope Adrian I (d. 795), the northern part of their realm was conquered in 774 by the Emperor Charlemagne (742–814), who assumed the title “King of the Lombards” and incorporated most of the realm into the Frankish Empire, using the remainder to help form the emerging Papal States. The Lombard duchies in southern Italy, however, had always been somewhat independent and endured long after, forming buffer states between the Frankish territory to the north and the Byzantine territory to the south until they were conquered in the 11th century by the Normans, who subsequently established a kingdom in Sicily and southern Italy at the expense of both the Lombards and the Byzantines. Paul the Deacon’s narrative traces the Lombard’s story from their mythic origins through the reign of King Liutprand (r. 712–744), arguably the most successful Lombard monarch, whose reign marks a highpoint before the decline that led to the Frankish conquest.

A Unique and Aged Specimen

The manuscript at hand represents one of the oldest surviving specimens of this tradition, the Codice Cividalese of the Museo Archeologico Nazionale in Cividale del Friuli, birthplace of Paul the Deacon, which originated between 825 and 850. Although mostly incomplete, containing only fragments of the second and fifth books, its proximity to the original makes it arguably the most reliable version. The text, which is adorned with red and green initials, is written in a mixture of Carolingian miniscule and pseudo-uncial script. One final special feature of the codex is the binding, which consists of two bare wooden boards bound by three bands and comprises a so-called “open binding” often found in early medieval manuscripts. Thus, the edition is a fine exemplar of both an early history and an early medieval manuscript. 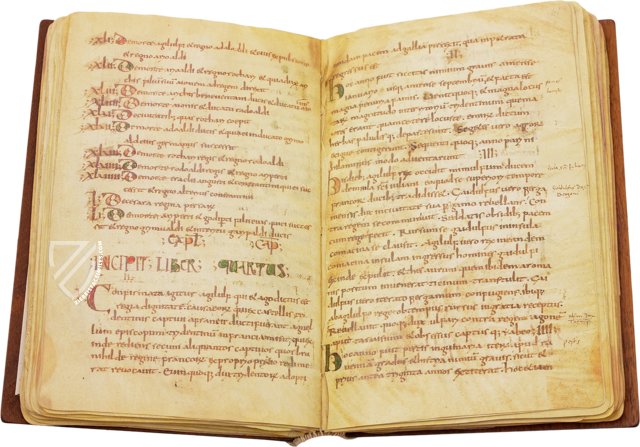 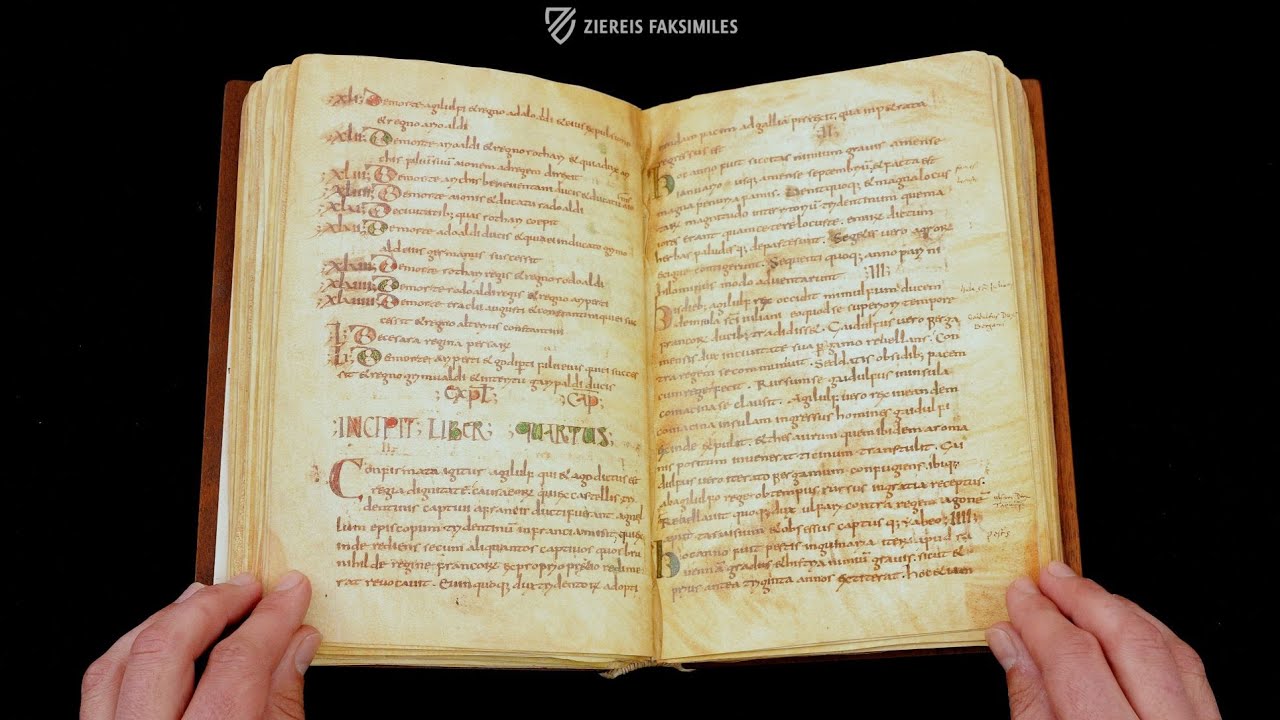 The commentary volume features a complete transcription of the manuscript as well as comprehensive scholarly essays on the Historia Langobardorum.
1 volume: Exact reproduction of the original document (extent, color and size) Reproduction of the entire original document as detailed as possible (scope, format, colors). The binding may not correspond to the original or current document binding.
Price Category: €€€ (3,000€ - 7,000€)
Edition available
Price: Login here!
Order / Ask a Question
You might also be interested in: