Written in 1789/90 by Joseph Haydn (1732–1809), this is a significant milestone of the famous composer’s career. It marks the beginning of Haydn’s later period, characterized by a more mature style, which frequently alternated between staccato and legato with smoother transitions, larger first and secondary movements, and a smaller third movement. This sonata was dedicated to Maria Anna von Genzinger (1754–93), a friend of Haydn’s and amateur musician from Vienna. It was published on June 1st, 1790, but it believed that most of the sonata was composed in 1789, with only the Adagio and some final revisions being completed in 1790. Genzinger expressed her appreciation and admiration for the work in a letter dated July 11th, but asked him to simplify a part of the middle section so she could play it herself. This altered version has never been discovered, but the composition remains an important cultural-historical milestone. 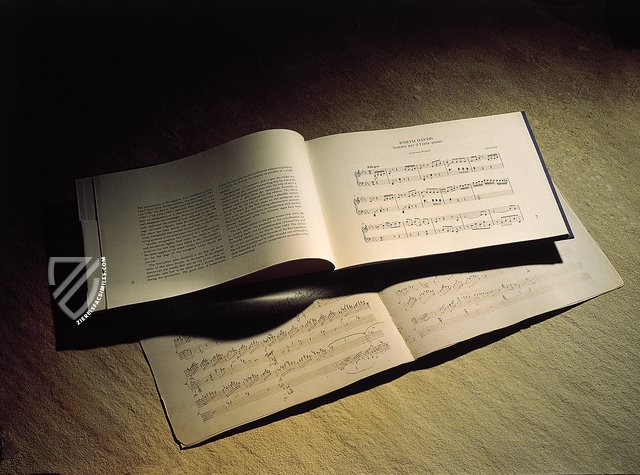 Akademische Druck- u. Verlagsanstalt (ADEVA) – Graz, 1982
Publisher: Akademische Druck- u. Verlagsanstalt (ADEVA) – Graz, 1982
Binding: The unbound facsimile is inserted in the commentary volume.
Commentary: 1 volume (36 pages) by Otto Brusatti
Language: German
1 volume: Exact reproduction of the original document (extent, color and size) Reproduction of the entire original document as detailed as possible (scope, format, colors). The binding may not correspond to the original or current document binding.
Price Category: € (under 1,000€)
Edition available
Price: Log in here!
Order / Ask a Question
You might also be interested in: