86 large miniatures in frame and 1,800 golden initials adorn this fine French manuscript containing the work of the famous humanist Francesco Petrarca: the Trionfi, which is counted among the most popular works of the great Renaissance poet. The allegorical poem evokes the Roman ceremony of triumph but replaces the conquering generals with allegorical figures such as Love, Chastity, Death, and Fame stands squarely in the tradition of his time and is simultaneously an expression of Petrarch’s literary creativity. It is also filled with intimate autobiographical references alternate with moralizing sections – the Laura who Petrarch profoundly revered naturally stands at the center of the work. This manuscript originated from Rouen in the early 16th century and presents the French translation of the Triumphs with with gorgeous, large-format miniatures.

Francesco Petrarca (1304–74), famous humanist, poet, and politician of the Italian Renaissance, is considered to be one of the most significant representatives of 14th century Italian literature. Petrarch – completely in the spirit of the Renaissance – took antiquity as a model and depicted man in the center of his worldview. The famous Trionfi, an allegorical poem, stand squarely in this tradition.

The Victory of the Good and Beautiful

This is a six-part verse poem in the form of triumphal depictions, a well-loved motif of Renaissance art as well, to be found e.g. in the countless triumphal processions. Here Petrarch extols the triumph of Love, Chastity, Glory, and Time, the triumph of Death over Time, and the triumph of Eternity. Intimate autobiographical references alternate with moralizing sections, and the Laura who Petrarch profoundly revered naturally stands at the center of the work.

The Vienna Trionfi-manuscript is a testimonial to the broad distribution of Petrarch’s poem. The Triumphs, this wonderfully allegorical Italian poem, is certainly not considered to be his most significant work, but is one of his most popular nonetheless. In this ambitious French translation of the Italian text – titled Les Triomphes de Petrarque – the significance of the Triumphs is made apparent. The gorgeous manuscript is a work of French illumination: originating in Rouen from the years 1500–1510, it presents itself as a fantastic work of the so-called Rouen school.

86 miniatures of Petrarch’s Trionfi are illustrated on 590 pages. These are gorgeously framed by impressive architectural decorative frames and are supplemented by 1,800 golden initials. The scenes present depictions of the content, e.g. Petrarch, dreaming in a chariot before Amor, and again Amor, the god of love. Additionally, numerous ancient myths were taken up, e.g. the tales of Pyramus and Thisbe, Salome, or Bathsheba. 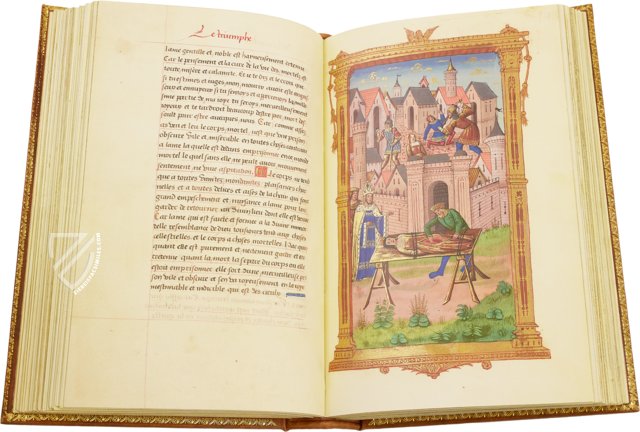 Cheaters Caught in the Act

These scenes of illicit paramours appear at the end of the chapter on the Triumph of Love. The amorous advances of the young man are depicted on the right as the two sit together and read from a book. His seduction of the young woman is complete in the interior scene on the left, but they are discovered by her husband, who pierces them both with a single stab of his sword after discovering their infidelity. This miniature depicting the pitfalls of passion precedes the Triumph of Chastity. 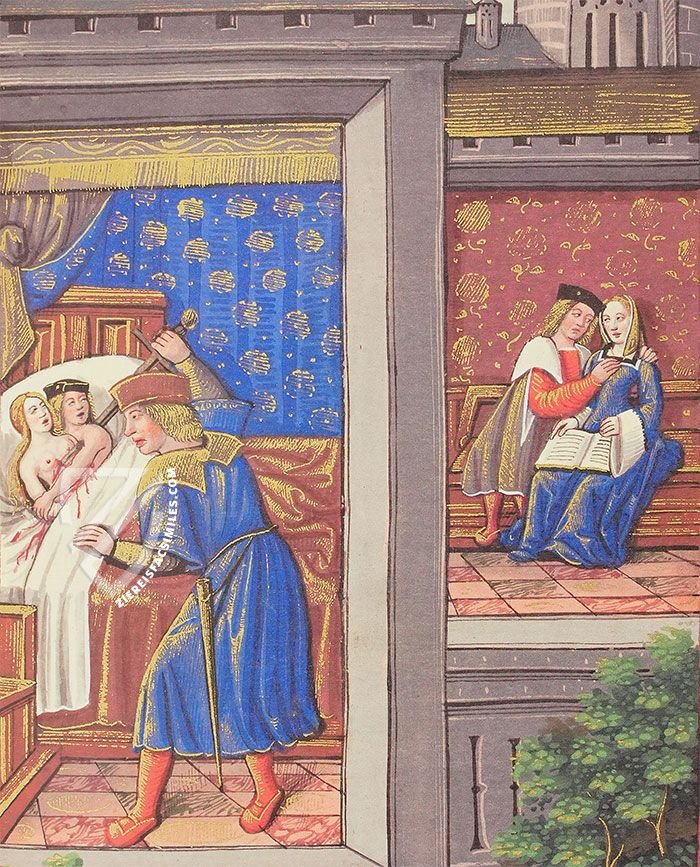 Although Petrarch only ascribes an actual triumphal chariot to Love, most artists chose to apply the device to all of the Trionfi. The personification of Death stands holding a scythe on a golden chariot drawn by two oxen. Instead of flowers, his Via Triumphalis is strewn with the corpses of proud people from across history including emperors, popes, and great warriors.

Death is described by Petrarch as being the humbler of the proud and victorious, a reminder of the fleeting nature of the lives of mortals. After Death plucks a head from his beloved Laura’s head, she dies and idealized death, but returns from Heaven to comfort the poet and tells him that they will be reunited after Petrarch has lived a long life. 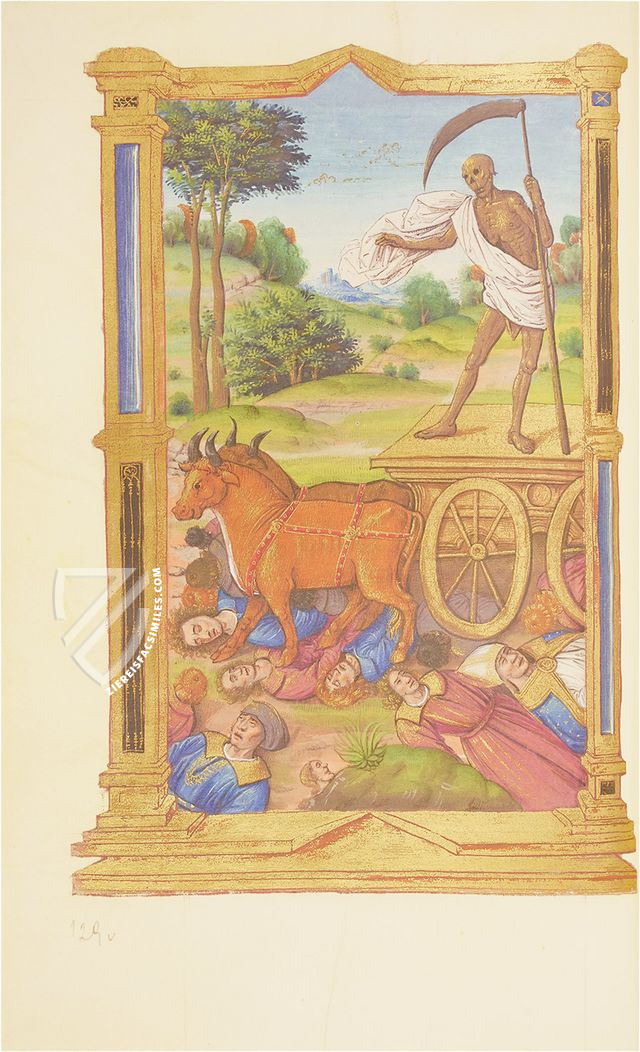 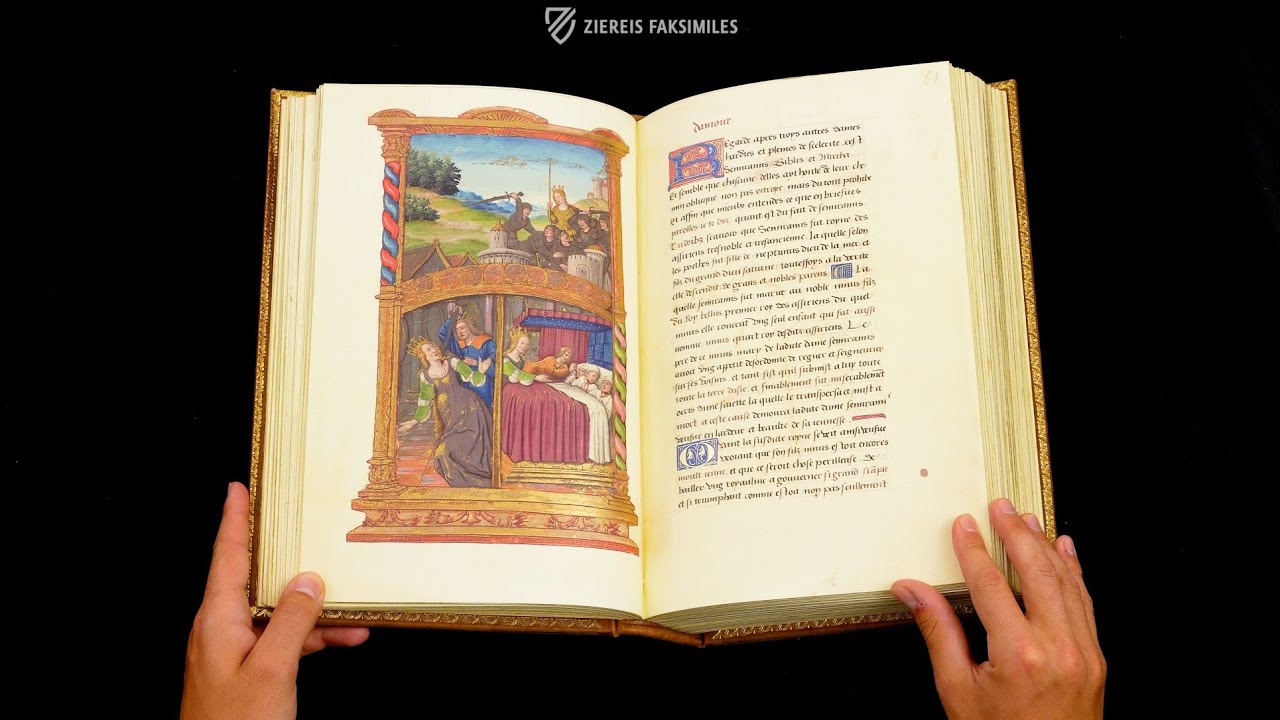 Publisher: De Agostini/UTET – Rome/Turin, 2011
Limited Edition: 499 copies
Binding: Leather binding with gold embossing on the interior edges
Commentary: 1 volume by Christian B.M. Berlakovits and Bernardo Glicino
Language: Italian
1 volume: Exact reproduction of the original document (extent, color and size) Reproduction of the entire original document as detailed as possible (scope, format, colors). The binding may not correspond to the original or current document binding.
Regular price without login (like new)2,790 €
Log in for a Better Price!
Order / Ask a Question