This landscape featuring the Monasterio de El Escorial is one of the most famous engravings originating from the 16th century and has been reproduced numerous times. It is the result of a collaboration between who designed El Escorial, Juan de Herrera, and the Flemish engraver Pieter Perret. An explanatory text regarding the fourfold purpose of the structure and a poem in praise of King Philip II, at whose behest the splendid royal monastery was built.

In 1584, the famous Spanish architect Juan de Herrera (1530–1597) signed a contract with Pieter Perret (ca. 1555–1637), an engraver from Antwerp, to convert the designs he had made for the Monasterio de El Escorial to copperplates for the fee of 600 ducats. Perret, who had arrived in Spain in 1583, had been a disciple of Cornelius Cort, Maeerten de Vos, and Gerard de Jode. By 1587, the so-called "Seventh Design" had been engraved and stamped, a panoramic perspective of the Royal Site of San Lorenzo de El Escorial, seen from its main facade facing west, which shows the monumental construction on its north and west sides. This intaglio print, measuring 49.5 x 77.5 cm, was entitled Scenographia totivs fabricae S. Lavrentii in Escuriali. The geographer Abraham Ortelius (1527–98) had a copy of this design reduced to 31.2 x 47 cm in 1591. Three thousand copies of this were published under the same title as the original. This popular image has since been printed in various collected volumes of cartography and cityscapes – it is easy to understand why. The engraving is remarkably precise, with perfect perspective, a delicate color palette, and is set amidst a rolling landscape.

A Popular Print of El Escorial

Under the engraving, and on both sides of the cartouche with the title, one finds a laudatory poem by Michael van der Hagen addressed to King Philip II (1527–98), who ordered the construction of El Escorial. In the lower left corner, a small legend establishes the map’s link to the geographer: A. Ortelius evulgabat or “put into circulation by A. Ortelius”. It was sold as a loose leaf, at least beginning in 1593, and was presumably marketed in this state with the engraving of the Monastery and the poem on one side. After Ortelius died in 1598, the plates of all his maps along with those of the cartographer Gerard de Jode (1509–91) were acquired by the printer Jan Baptist Vrients (active 1575–1611/12), who reissued the Teatrum Orbis terrarium beginning in 1603. This engraving of El Escorial was included in this new version, number 156 of the maps or cityscapes in the 1603 edition. An explanatory text refers to the fourfold function of El Escorial as a church, monastery, university and palace, already referred to by van der Hagen in his poem, expanding the explanations so that the reader could locate it in the image where they found the different rooms to which he was describing. Special emphasis is placed on the church, and an extensive paragraph mentions the location, measurements, and content of the library. This image was subsequently included in the English edition of the Teatrum in 1606, the Italian editions of 1608 and 1612, and the Latin edition of 1609 and 1612. 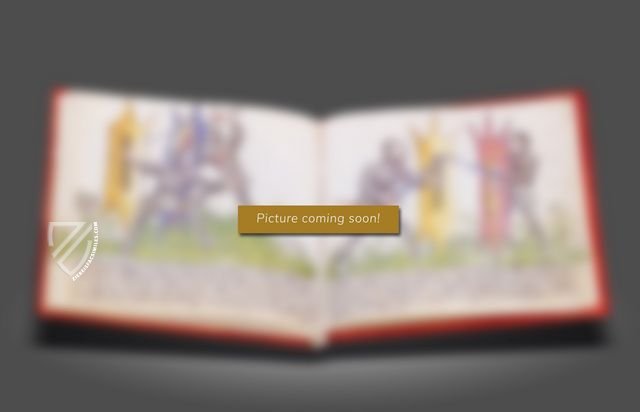 Circulo Cientifico – Madrid, 2012
Publisher: Circulo Cientifico – Madrid, 2012
1 volume: Exact reproduction of the original document (extent, color and size) Reproduction of the entire original document as detailed as possible (scope, format, colors). The binding may not correspond to the original or current document binding. The sheet was printed in stochastic screening with gold ink on Ingres paper. The reverse side of the sheet features the Latin description of the Real Fábrica.
Price Category: €€ (1,000€ - 3,000€)
Edition available
Price: Log in here!
Order / Ask a Question
You might also be interested in: